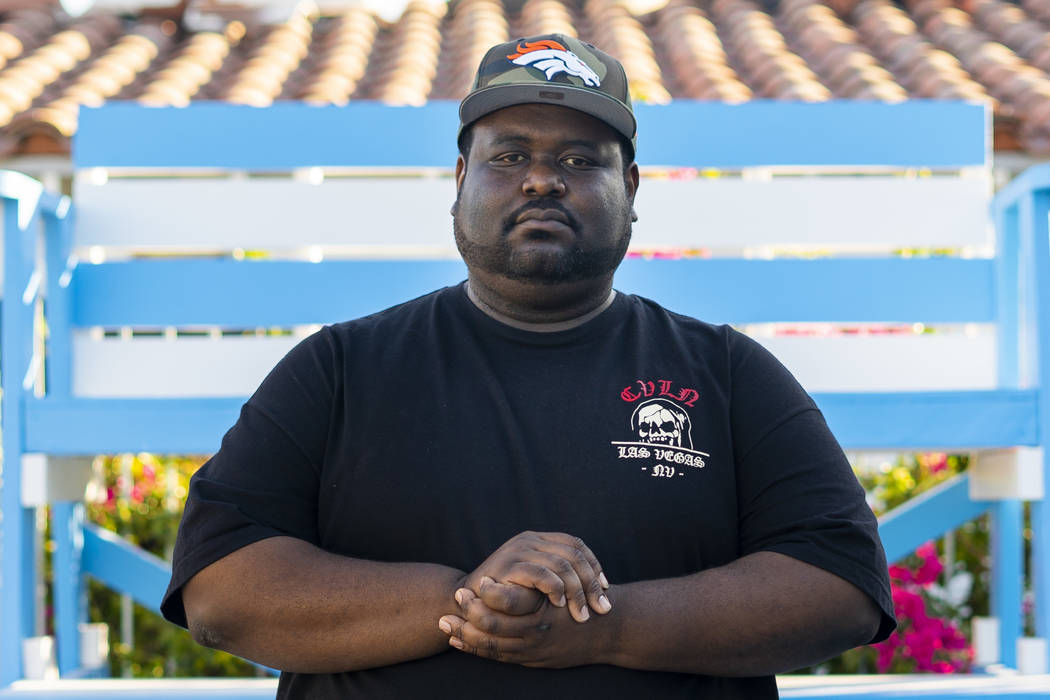 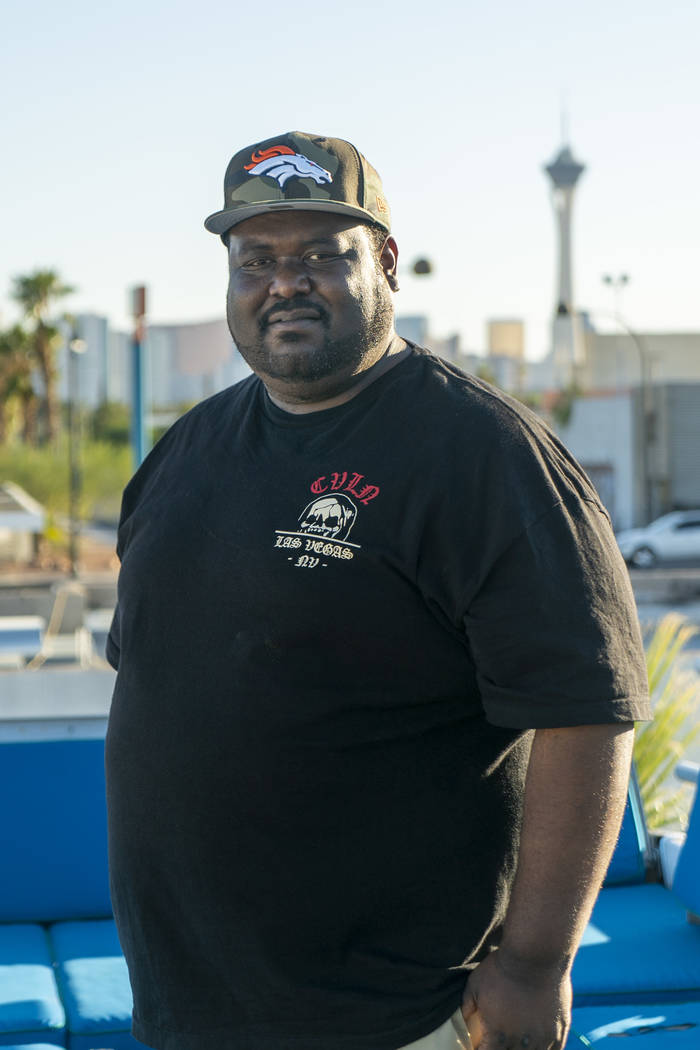 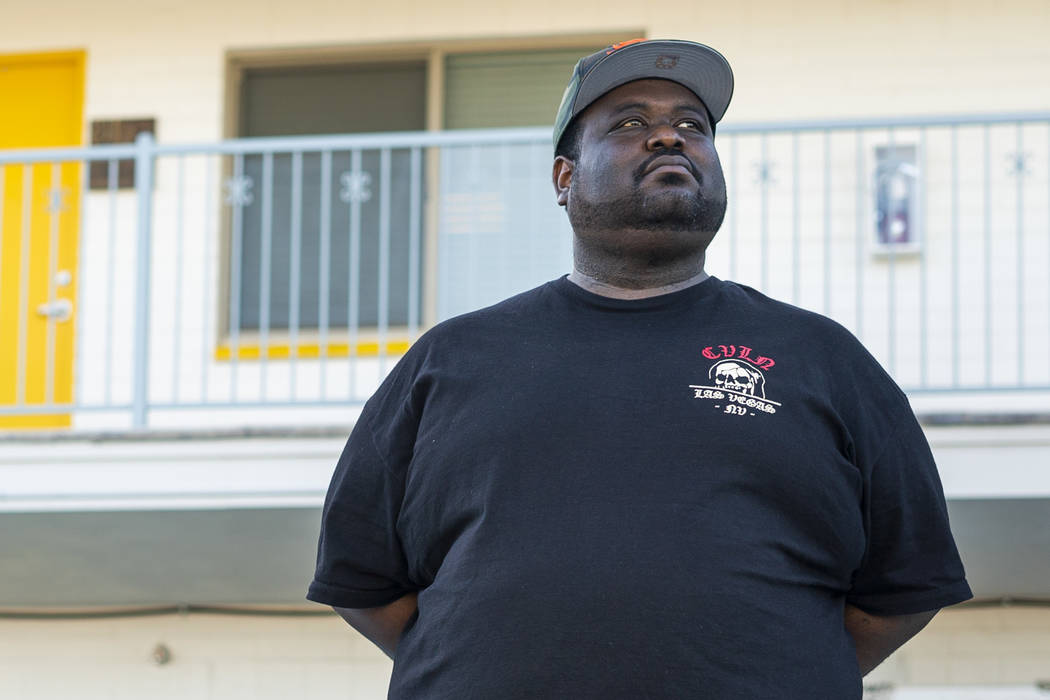 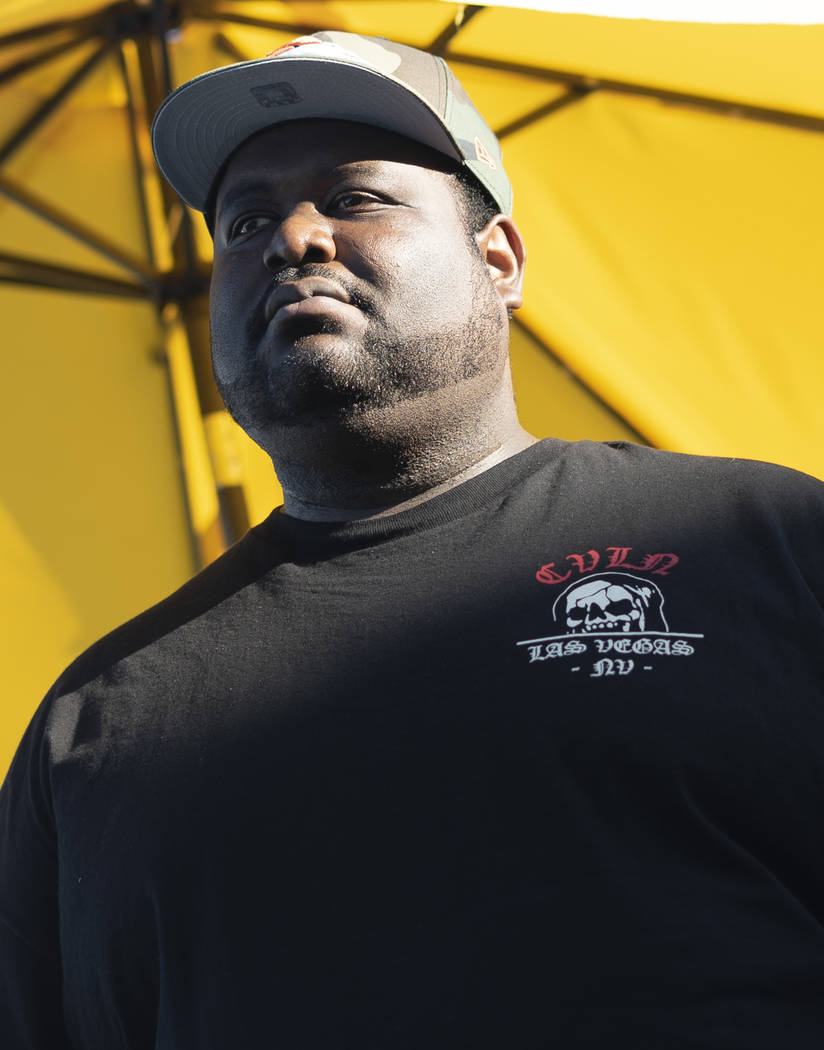 It’s not a question that Hassan Hamilton ever wanted to pose, but he does so anyway.

“Can I be black?” the Vegas MC wonders over a laid-back piano line and cracking snare on his new song of the same name.

“And throw a barbecue in the park / Swim in the pool / Maybe sell some water when it gets hot without somebody thinking that I’m up to no good.”

“And take a stand against a social injustice / Protest / Speak my mind without you getting disgusted.”

“And not be under constant scrutiny whenever I decide to move to one of your communities.”

“What is your problem with me? / Why do you hold a grudge? / Why does the color of my skin make you so quick to judge?”

Hassan Hamilton is not an angry man — he’s the opposite in fact, a big dude with an even bigger smile who sports a T-shirt with the Hamburglar and Wimpy wielding pistols like Jules Winnfield and Vincent Vega from “Pulp Fiction” when we meet up with him at the Bronze Cafe on a Wednesday evening.

Instead, it registers as a genuine plea for understanding and one of the most powerful, poignant songs to come from these parts in recent memory.

“I’m asking an honest question,” Hamilton explains over a beer, noting how he avoided taking a more confrontational stance on the song. “Saying it in a nice tone, that’s the whole thing that I was really trying to come across with, a tone where people could understand that it’s not passive-aggressive or I’m not just beating you in the head with it.”

The song, which Hamilton recently dropped in advance of his new record, “Not Him Again,” due out later this month, is something of a departure for the MC, who began establishing himself as one of Vegas hip-hop’s most promising talents with his 2012 debut, “Westbound & Down,” his mic skills and sense of humor equally robust.

If there’s one unifying trait of Hamilton’s discography, it’s that his humanity has always shone through his music palpably, making his numerous albums and EPs feel like an honest expression of himself: a fun-loving, self-effacing kind of guy who’ll pose shirtless for an album cover (see 2014’s excellent “Fat, Black & Awesome”) and deliver tight rhymes about the joys of subsisting on Top Ramen.

So when Hamilton expresses more serious sentiments, as he does on his latest single, it hits home that much harder.

“People are feeling threatened because of the misconceptions and the stereotypes, and it’s gotten to a point where I’m sick of it,” Hamilton says of the circumstances that inspired “Black.” “Mentally, the powder keg erupted, and I just had to put it down on paper. I’m not gonna yell. I’m not gonna do all this other stuff. I’m just going to ask an honest question, ‘What is your grudge with me?’ ”

He asks equally tough questions of his own culture.

“I’ll answer questions about my people,” Hamilton says before reciting one of the verses to the song in question: “Bad enough I got to deal with some of my own kind / Who make us all look bad through black-on-black crime / They the ones fightin’ and killin’ each other / Let’s fight the system instead, sisters and brothers.”

Ultimately, what “Black” is all about is sparking conversations, fostering lines of communication.

“Maybe we can open up a dialogue about a lot of things,” Hamilton says. “That’s one of my goals for this.”

Hamilton plans to shoot a video for the song soon, recruiting activist art collective Indecline to work with him on the clip. He’s also putting the finishing touches on “Not Him Again,” his first full-length since 2014, which comes after a brief hiatus in Hamilton’s music career.

“The time away was a re-evaluation,” he says. “It just put that big grin back on my face, like I was 16, 17 again, just waiting to get up on that mic. I just took that energy, bottled it up and poured it out into this project.”

In the meantime, Hamilton knows that everyone might not get where he’s coming from on “Black.”

But sometimes you’ve got to go out a limb — even if that limb might break.

“There was a part of me that had some worry about blowback,” he says. “But nobody’s placing the blame on anybody. Let’s get to the root of the problem. Let’s take care of this. How do we solve these problems? How we do address these things?