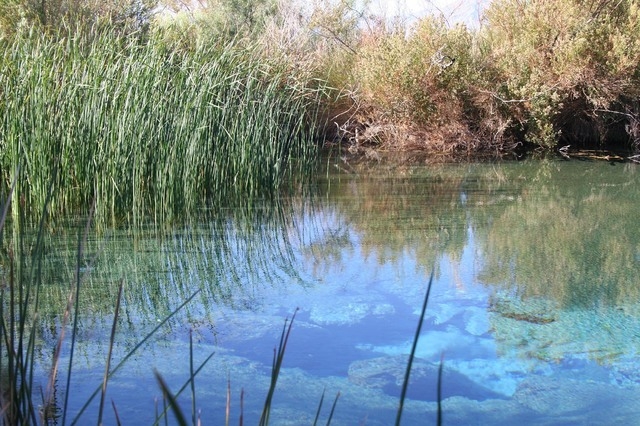 On maps and satellite photos, the wrinkled skin of Nevada tells a tale of titanic geological forces at work.

Encompassing most of the Great Basin, Nevada contains more individual mountain ranges than any other state, most running north and south, and many pushed up very high by movement in the Earth’s crust.

Violent volcanic activity is not far in Nevada’s past, geologically speaking, leaving craters, cinder cones and lava flows across the state. Indicators of the seething activity beneath the crust, 312 hot springs bubble to the surface across the Silver State, more than in any other state.

They have been drawing attention since prehistoric times. Found in every county, Nevada’s thermal springs vent heated water ranging from scalding, at geysers and fumaroles, to comfortably warm. Early native people made good use of them, taking healthful soaking baths in warm mineralized springs, cooking in springs too hot for bathing and using the hot water to help shape wooden tool and weapon handles and to process other natural materials to make many useful implements.

When explorers crossed Nevada’s expanses, they noted springs producing good drinking water and a few sites for hot baths. Some of the most popular hot springs along the trails developed into resorts as the territory was settled.

Nevada’s hot springs draw attention today mainly for leisurely soaking, swimming or wading. A few of the hottest are put to use as sources of geothermal energy, such as Steamboat Hot Springs south of Reno, whose sulfurous waters power one of the state’s earliest geothermal generating complexes.

Some Nevada hot springs are privately owned with many located on ranches, but more are located on public lands. Some are accessible only by trail, but many can be reached by roads. All 312 are included on a website for natural hot springs enthusiasts, listed from hottest to coolest temperatures complete with GPS coordinates.

Heed the signs posted at most of the state’s hot springs. Grim warnings at some springs on public lands advise visitors to test the temperature before bathing. Other signs may indicate dangers such as the pesky critters that thrive in warm water and cause “swimmer’s itch” at places like Ash Meadows or the much more dangerous amoeba in hot springs along the Colorado River (it enters the body through the nose and can cause illness and even death).

Pioneer entrepreneurs developed facilities at some hot springs for therapeutic uses. One of the earliest was Walley’s Hot Springs near Genoa, started in 1862 and still a popular site. The Carson Hot Springs in Carson City also date to pioneer times.

Hot springs near Las Vegas that have enduring appeal include the wading pool, creek and picnic facilities at Rogers Spring along Lake Mead’s Northshore Road.

Several warm-water springs and creeks in Southern Nevada provide protected habitat for tiny native fish and other rare creatures. National wildlife refuges at Warm Springs in Moapa Valley and Ash Meadows near Amargosa protect varieties of endangered fish, including the Devil’s Hole pupfish. A Nature Conservancy reserve near Beatty along the Amargosa River protects rare amphibians and other life-forms.