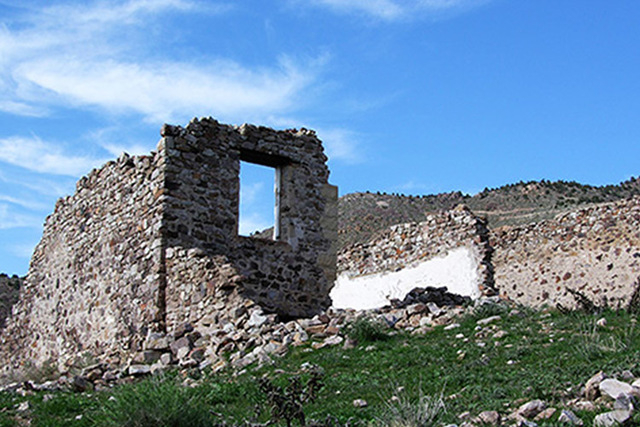 The ruins of old Delamar, once one of Nevada's richest gold producers. (Courtesy/LincolnCountyNevada.com)

A small herd of mustangs drifts toward Delamar Valley, gradually distancing itself from a carload of visitors to the ruins of old Delamar, once one of Nevada’s richest gold-producing towns.

The horses graze on spring grasses, picking their way through bright wildflowers. Soon they fade into the distance, disappearing just like the hundreds of people who toiled in the mines and mills of the boomtown more than a century ago.

Delamar epitomizes the mining camps and towns that pepper Nevada’s rugged backcountry. They are often remote, located where no community but a mining town has good reason to be. Delamar nestles against a serrated range of wooded mountains south of U.S. Highway 93 on the way to Caliente about 150 miles from Las Vegas.

To reach the ghost town, drive north on Interstate 15 to the U.S. 93 turnoff. Follow U.S. 93 past the tranquil Pahranagat Lakes and through pastoral Alamo. At the junction north of Alamo, stay on U.S. 93 toward Caliente. The road tops Pahroc Summit and heads across lonely Delamar Valley toward Oak Springs Summit. Watch for the marked turn onto Delamar Road before you start the climb toward the second summit.

From the turn, follow the graded road south along a power line before heading east toward the ghost town. Follow the road into the foothills. The Delamar ruins are about 13 miles from the highway.

A small, roofless stone building stands along the road near a short spur to one of two cemeteries in Delamar. A wire fence keeps livestock out, but not vandals who have helped themselves to many of the grave markers. A few headstones, monuments and ornate metal fences delineate some of the graves and family plots.

Follow the road over a hill for the first view of Delamar’s stone ruins, mill floor girders, mine dumps and diggings. Unprotected by walls and roof for decades, huge wooden beams supporting the floor of a large mill disintegrate just below the road. Wood used to shore up tunnels is just as old and dangerous, so stay out of tunnels and watch for open mine shafts. At least one of the main mine entrances was dynamited years ago for safety’s sake.

Discoveries of gold-bearing rock in 1889 spawned a camp called Ferguson near diggings in Monkeywrench Wash. In 1894, Montana investor Capt. John De Lamar bought most of the mines near Ferguson and increased output. He renamed the early camp Delamar.

The town became the major Nevada gold producer by the late 1890s. Even after Tonopah and Goldfield boomed in the early 1900s, Delamar still ranked as the third-largest producer in the state. Mines there continued to produce until 1909, when most residents left. Including a brief revival, gold production from Delamar’s mines totaled more than $13.5 million.

Delamar rapidly grew from a crude camp to a small city of at least 1,500 people. Despite its remote location, Delamar had stores, saloons, eateries, a newspaper, a hospital, a school and an opera house. Some buildings were brought in on skids from Pioche, nearly 50 miles away. Most supplies, equipment and materials had to be brought by wagon 150 miles from the railhead at Milford, Utah.

Despite several nearby springs, Delamar never had enough water. Even after construction of a pipeline from a well 12 miles away in Meadow Valley Wash, demand exceeded supply.

The shortage would prove deadly. There was never enough water to fight fires, which wiped out most early wooden or canvas shelters.

Worse, there was not enough water to dampen the quartzite dust from the gold ore. So many miners and mill workers died from silicosis after breathing the dangerous dust that Delamar became known as “The Widowmaker”