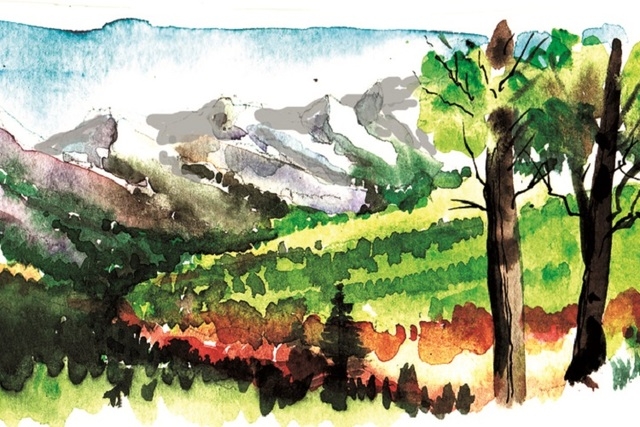 The picturesque village of Lamoille sits nestled at the base of the rugged Ruby Mountains. (MIKE MILLER/SPECIAL TO THE LAS VEGAS REVIEW-JOURNAL)

The high, rugged peaks of the Ruby Mountains, often called Nevada’s Alps, overlook much of northeastern Nevada. Nestled along a creek near the base of the mountains, picturesque Lamoille retains much of its rural flavor, providing visitors with glimpses of the area’s pioneer ranching history.

The quiet village sits 20 miles from Elko on the way to a scenic drive into the Ruby Mountains through beautiful Lamoille Canyon.

Lamoille is 450 miles from Las Vegas in an area flush with opportunities for camping, hiking, fishing, hunting, winter sports and scenic exploration.

Drive north on Interstate 15 to the junction of U.S. Highway 93. This scenic route paralleling Nevada’s eastern border runs north into Idaho. At the intersection of U.S. 93 and Interstate 80, head west toward Elko. In Elko, look for the junction with state Route 227 and turn south to reach Lamoille and the scenic drive into the canyon. Just before you reach the old community, you’ll pass the turnoff for Lamoille Canyon.

A popular steakhouse, a bed-and-breakfast and community get-togethers, such as the country crafts fair held each June, make Lamoille a popular destination. Drive the village’s grid of streets to spot signs of yesteryear among a few early homes, weathered barns and outbuildings. Venerable stands of trees and gnarled orchards attest to Lamoille’s long history. Look for cattle, horses, sheep and other livestock contentedly feeding in meadows and pastures, as ranching has long been a mainstay of the region.

One of the most-photographed buildings in the county, the 1905 Lamoille Presbyterian Church occupies a place of pride. The entry doors are set in the base of the handsome, white-painted chapel’s bell tower. Inside, the pews are fitted with under-seat racks for the Stetsons worn by so many in Nevada’s ranching country. Volunteer efforts saved the old church and restored its dignity when it fell into disrepair. It is a popular site for weddings.

To follow the course of the Lamoille Creek up into the mountains, return to the fork for the scenic drive. It climbs 13½ miles from sage-covered ranch lands around Lamoille through a forested pass into a glacier-carved region below peaks rising more than 11,000 feet, where snow remains even in summer. It ends at a turnaround at nearly 9,000 feet elevation in the heart of the Ruby Mountains. The range is part of the Humboldt-Toiyabe National Forest, covering mountains throughout Nevada and a portion of California.

The lower part of the road into the canyon remains open all year, but heavy winter snows close the upper section that runs just below the timberline.

The forest service maintains two small picnic areas along the route, the first at the site of an old powerhouse. A 40-unit campground at Thomas Canyon remains open from mid-May through October.

The geological forces that created the dramatic scenery revealed along the road are explained by interpretive exhibits at four stops along the route. The road accesses several trailheads, part of a network of trails 100 miles long to streams and lakes, ridges and peaks in the Ruby Mountains.

Cut by many creeks and dotted with alpine lakes, the Ruby Mountains are a haven for fishermen. Lamoille Creek is one of the more accessible places to fish in the area. Most other bodies of water in the area are reached only by trail. Organized horseback fishing trips are popular options for serious anglers.

Plan to spend a little time exploring the area. Elko offers many lodging options, including hotels, motels, bed-and-breakfast inns and nearby guest ranches. Dining choices in Elko include traditional Basque fare in the state’s largest concentration of Basque restaurants.

Learn more about the region’s pioneer heritage, ranching, railroading and mining history by visiting the Northeastern Nevada Museum and the Western Folklife Center in Elko and the Bureau of Land Management’s overland trail information center west of Elko along I-80.