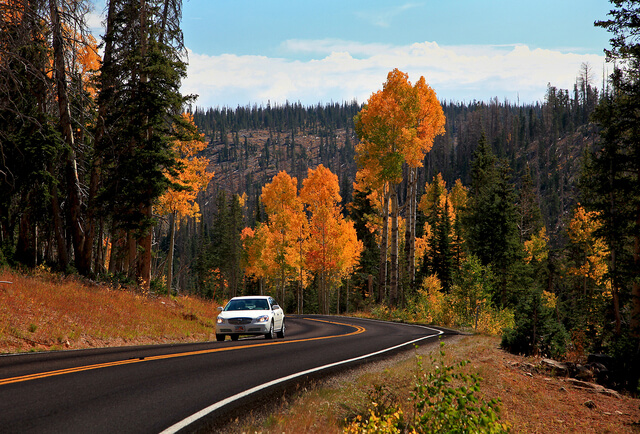 Southern Utah’s fall color spectacular rivals better-known seasonal displays found elsewhere in the country — and is much closer and easier for Southern Nevadans to enjoy.

Visitors may plan several short trips to enjoy weeks of autumn color by starting in Utah’s high country and following the color to lower elevations as the season progresses. The show often lingers until around Veterans Day, especially in protected canyons and along rivers and creeks.

The color began to show up in late September on Utah’s high plateaus in places like Zion National Park north of Zion Canyon toward Cedar Breaks and Brian Head, in Bryce Canyon National Park, in the Pine Valley Mountains and in the forests east of Beaver.

Barring early frosts, the high-elevation color usually peaks around mid-October. The high country north of Zion and east of Cedar City offers miles of good highways through pine and fir forests edged with meadows and broken by stands of white-trunked aspen that take on fiery hues in the fall. Mountain meadows may still be bright with late-season wildflowers, as well.

This region is about a four-hour drive from Southern Nevada, following Interstate 15 north to Cedar City and then east on state Route 14 through Cedar Canyon to reach the 10,000-foot plateau.

Panoramic views of the colorful countryside are found along Route 14 at the Zion Overlook and at the high promontory of Brian Head Peak just off the road from Cedar Breaks National Monument.

If you have time, head for the town of Panguitch on a backcountry byway bright with autumn color. It starts near Cedar Breaks and threads through the high country past Panguitch Lake and down to the town along a lovely stream.

Utah Route 12, one of the most scenic highways in the country, heads east from U.S. Highway 89 near Panguitch to reach several state parks, as well as Bryce Canyon and Capitol Reef national parks. As the highway approaches the town of Boulder, this unforgettable roadway courses along a narrow clifftop that falls away dramatically on either side. Colorful during any season because of the vivid sandstone formations along the way, this drive is apt to induce sensory overload in the fall with the added brilliance of the changing leaves in Dixie National Forest.

The road through the historic town of Pine Valley ends in a high forested area with campgrounds, several trailheads and a stream. The area is bright with color in the autumn. The network of hiking and equestrian trails offers opportunities for exploration before winter snows cover the fallen leaves.

Autumn lingers at lower elevations long after the first bright leaves have fallen in the high country. Look for late-season autumn color in protected canyons such as the approach to the high country along Route 14 and the descent from the forested highlands toward scenic U.S. 89 through the Sevier River Valley.