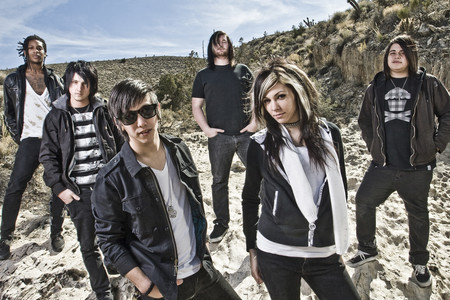 Bracing and brash, coed screamo contingent Eyes Like Diamonds sound like a broken jaw feels. Singer Diego Perez, bassist Tony Pell and keyboardist Danielle Shrudder break it down for us.

"We can tell you what we don’t sound like. We are definitely not a mainstream band. We don’t try to write radio hits. We sound like the band that bands want to sound like."

You guys have a new EP coming out. What can we expect?

"Yes, we do have a new EP we will be releasing on New Year’s Eve. We’re all very stoked for this EP. We will be recording with Kris Crummett, who’s recorded such bands as Closure in Moscow, Dance Gavin Dance, In:Aviate, Lowe Definition and plenty of others.

For this EP, we decided to go in a completely different direction than what we usually would play or write. We hope our fans will still enjoy the time and effort we put forth to make this record, and most of all, the tunes. We decided to drop all the technicalities the band was doing previously and write this EP based off of just feeling the music flow as a whole instead of just writing music to write music. All of the members definitely let every note, hit or strum flow from their fingertips effortlessly instead of trying to construct a masterpiece. For the fans and those interested in hearing what we have to say, be expecting an onslaught of emotions and feelings when the EP drops."

Question for Danielle: What’s the best and worst thing about being in a band with five dudes?

"I love being the only girl in the band. I’m spoiled, because if I complain enough I get my way. And there’s nothing like smelly stinky men after a good performance! Just kidding. These guys are my brothers, and honestly, I might be more of a guy than some of them, but I’m still hands down a pretty princess.

"Yeah, but I get a little help from my good buddy Jack Daniels to help soothe it. Also, there is a DVD out called ‘The Zen of Screaming’ that helps teach you how to use that sort of vocal technique without causing damage to your vocal chords."

Your drummer calls himself Knives. So what’s the story behind the nickname?

"I called him and asked him what the deal was just now, because quite frankly none of us have even asked him this question. He was in class so he had to be brief, but he explained that it’s because of two distinct things: one being it’s his favorite character of an anime called ‘Trigun’ (he’s really into anime) and the second reason is that it’s mainly due to the never-ending back-stabbing that he and everyone else in this life will have to constantly face. He’s a little out there, but we all love him!"