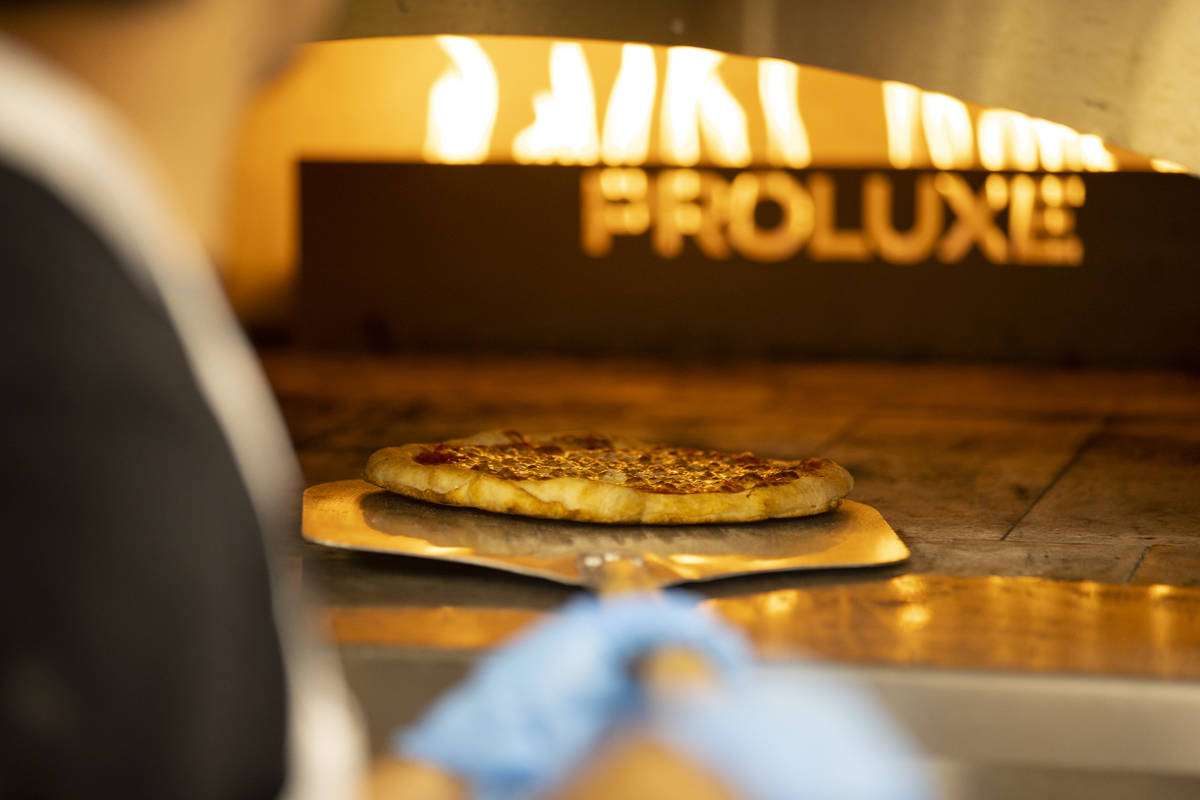 A pizza is taken out of the oven at the Fly Pie drive-thru pizza restaurant at St. Rose and Coronado Center parkways in Henderson, which opens Saturday. (Erik Verduzco / Las Vegas Review-Journal) @Erik_Verduzco 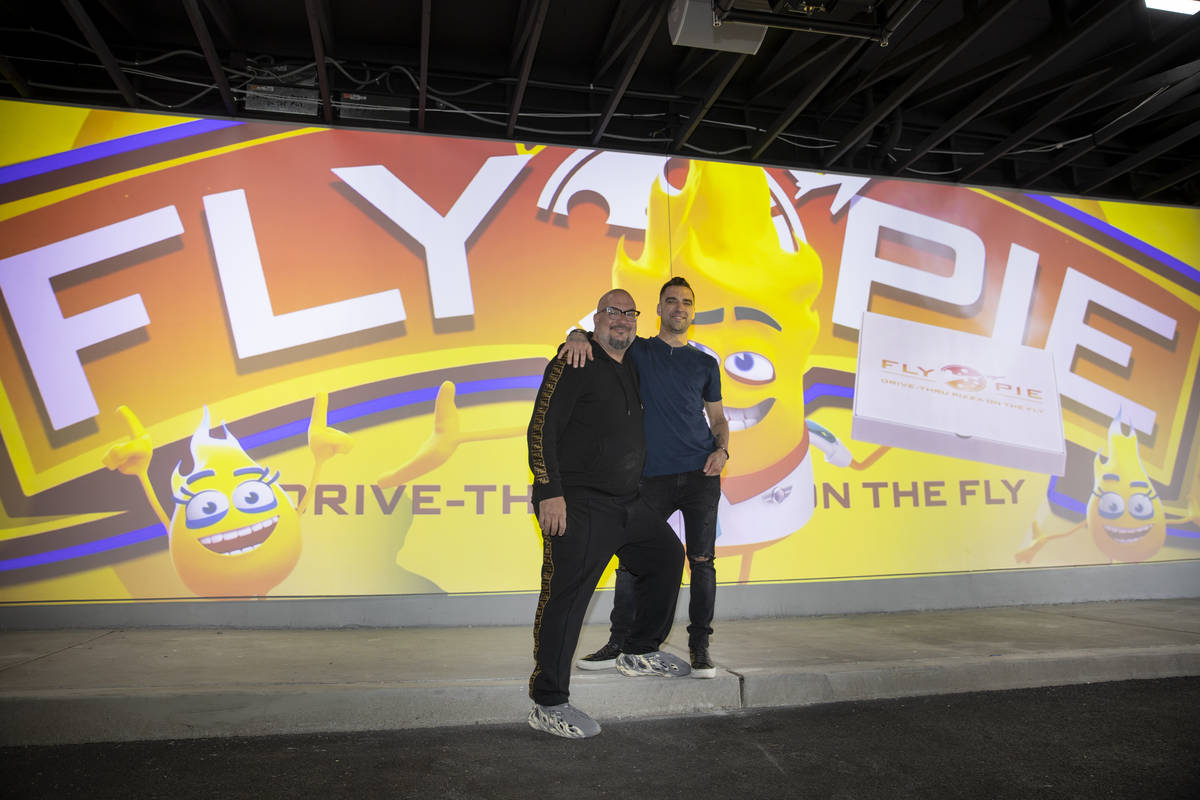 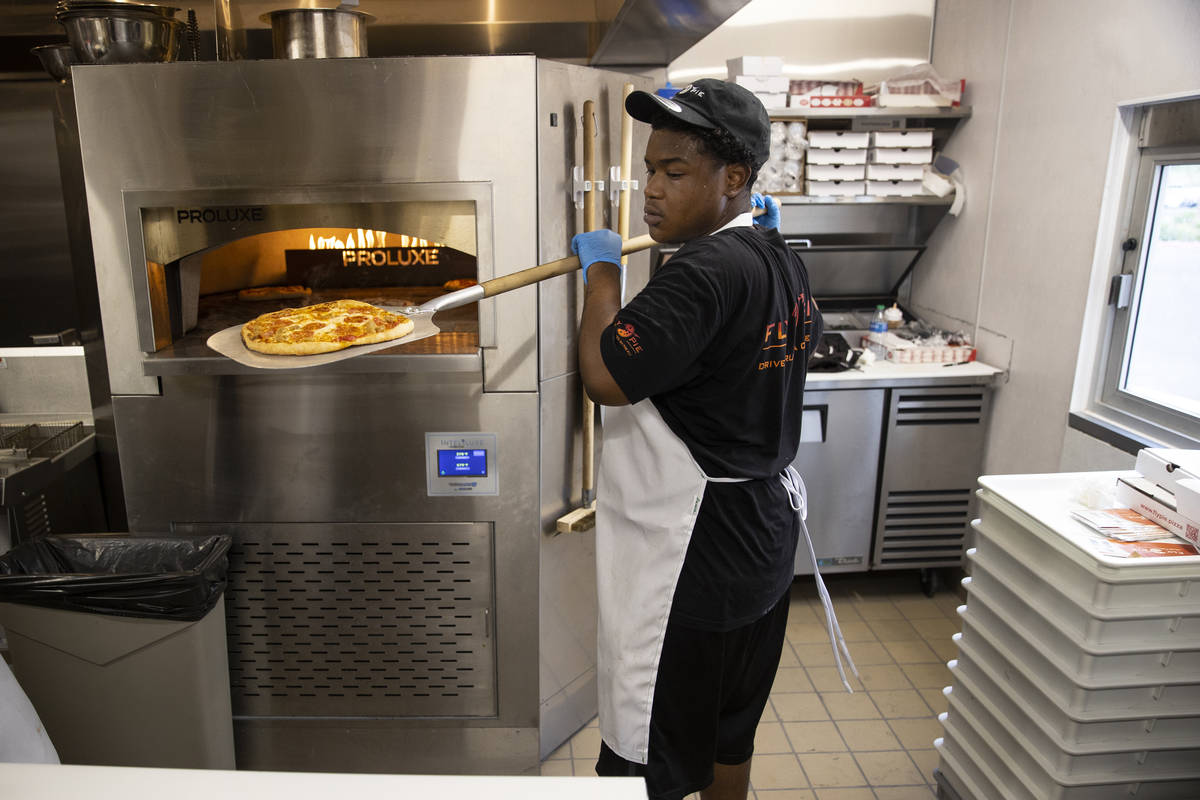 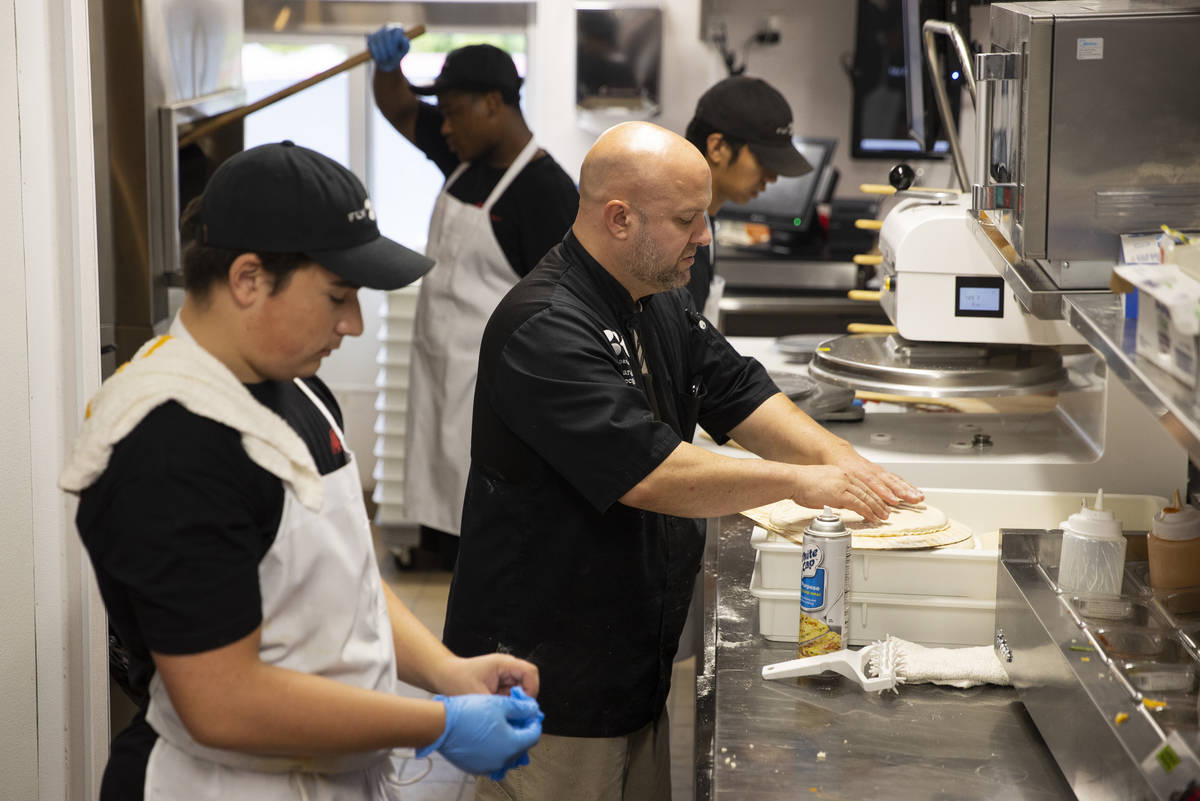 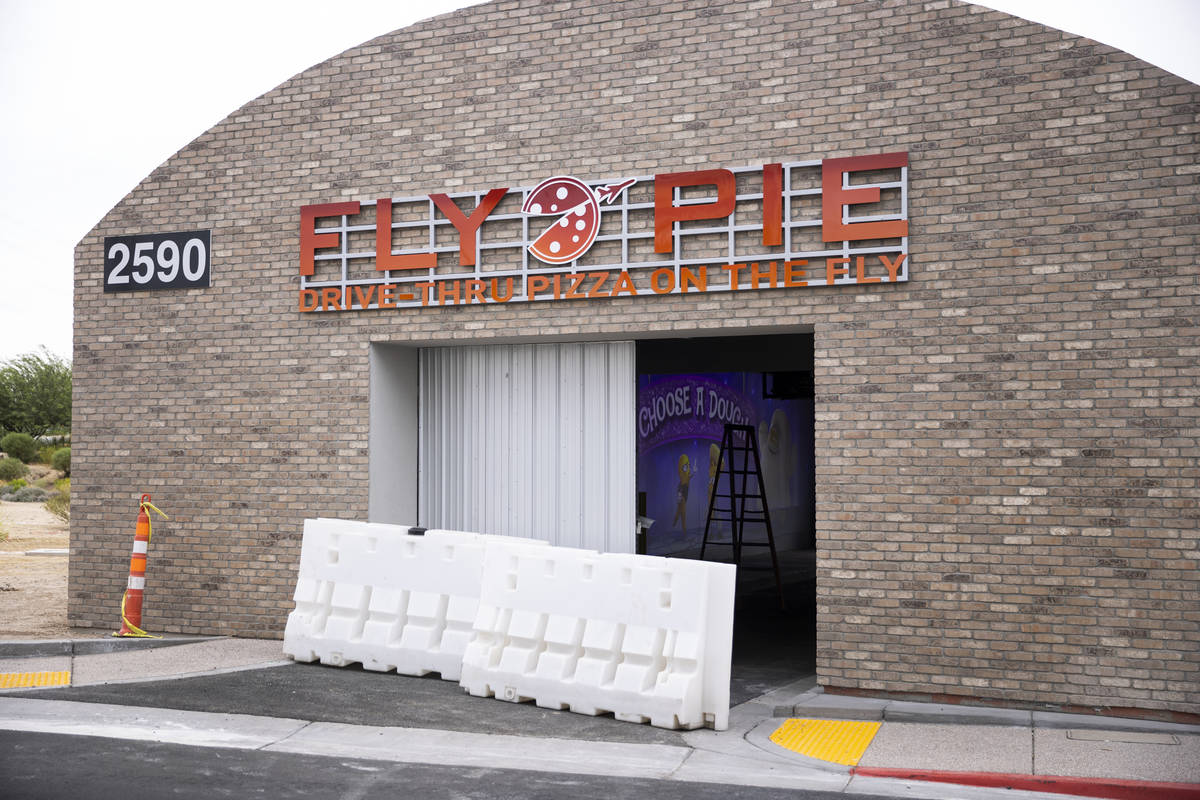 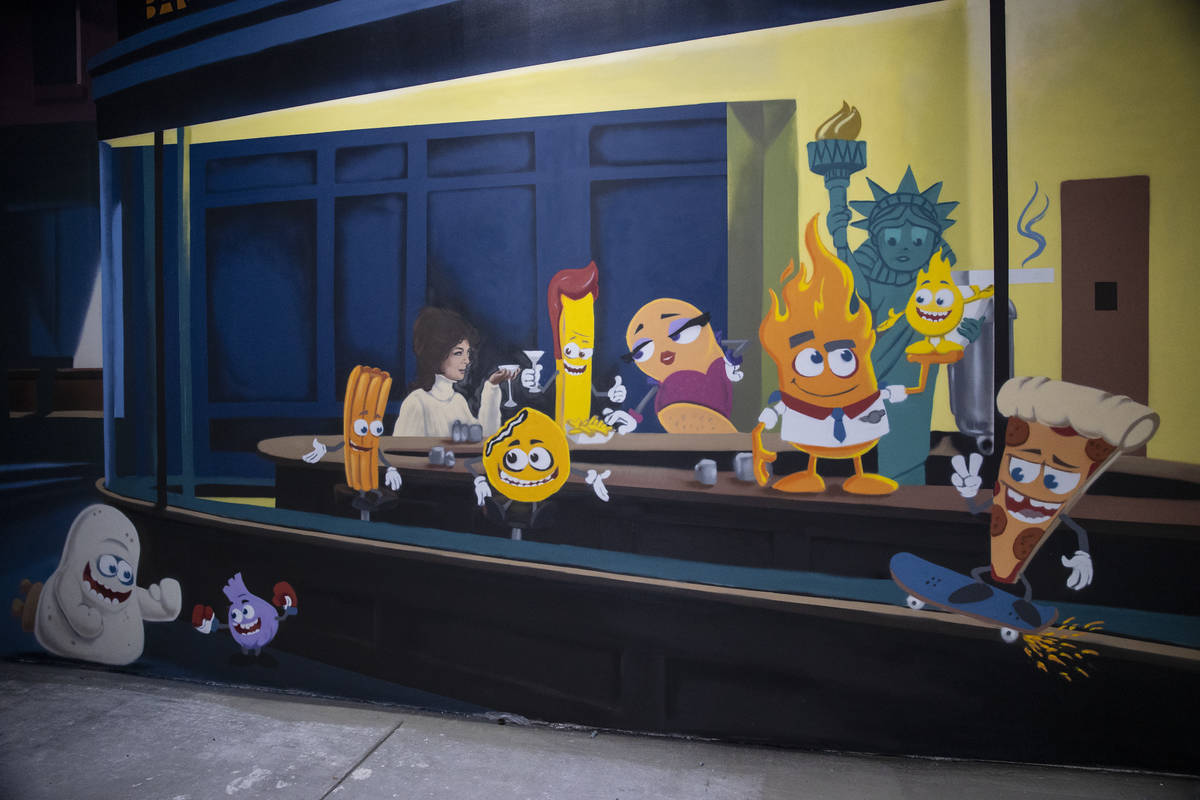 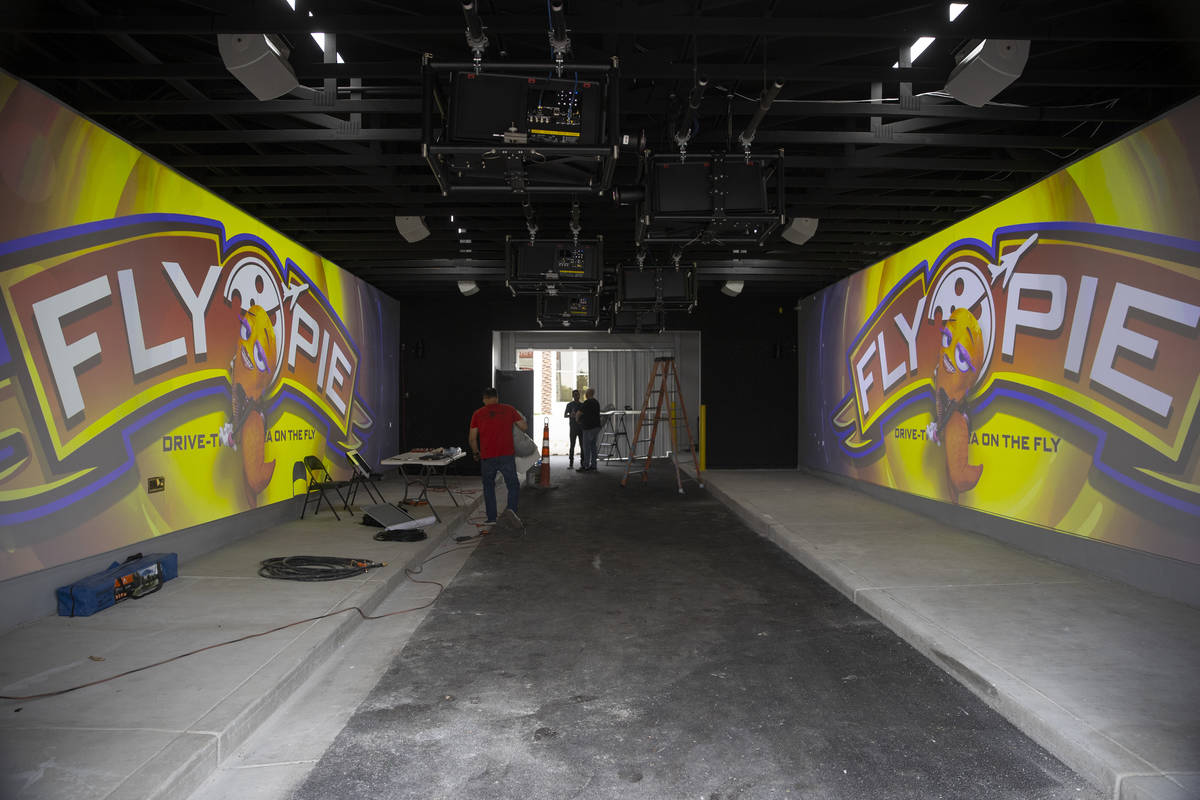 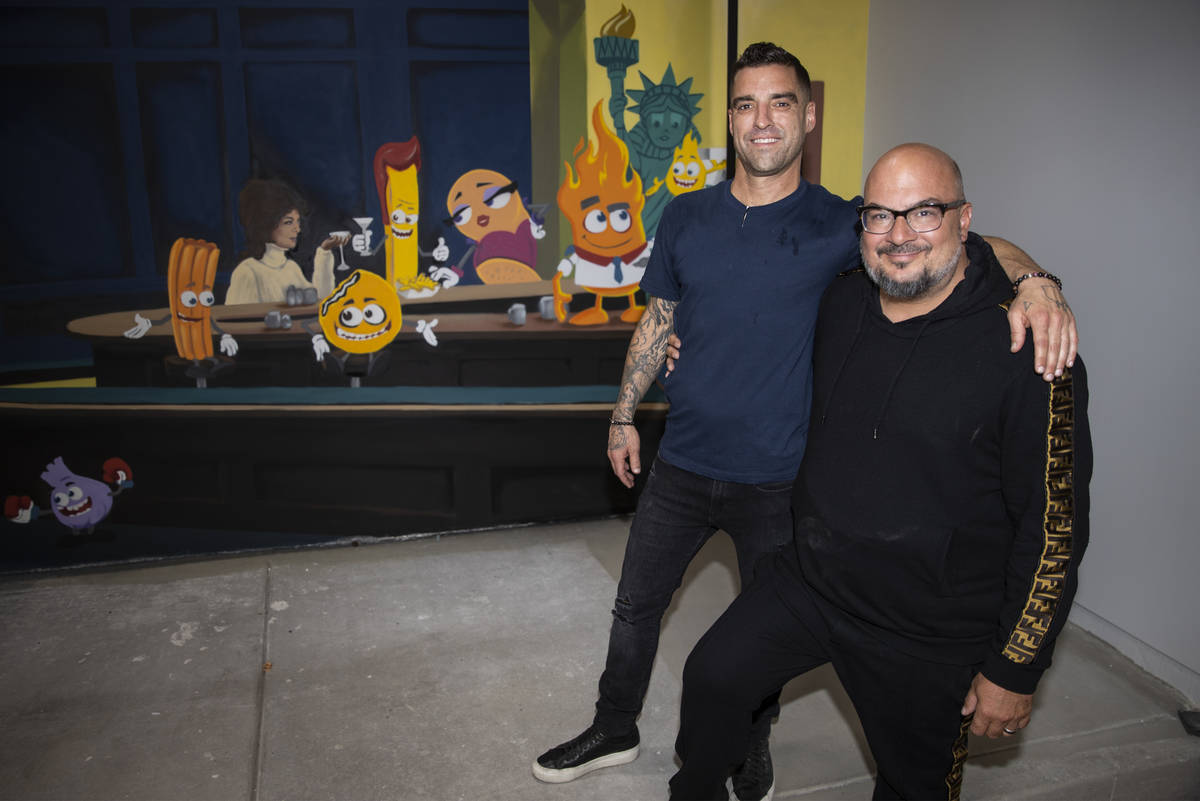 Fly Pie has left the runway.

The new drive-thru pizza concept, from “CSI” mastermind Anthony E. Zuiker and Scott Godino Jr., who owns Born And Raised restaurants/sports bars, was set to open this weekend at 2950 St. Rose Parkway, at Coronado Center Parkway in Henderson. And despite the labor shortage that’s plaguing restaurants and other businesses in Southern Nevada and the rest of the country, it’s fully staffed with a cadre of 35 to 40.

As an employee said as she handed off a pizza at a friends-and-family practice day Wednesday, “Thanks for flying with us, and safe travels.”

The employees, who are of diverse ages but mostly on the younger side, are part of a unique empowerment program. They each get to choose patches, tailored to their interests, to decorate their uniform vests.

“They’re representative of who they are,” Zuiker said of the patches. “When I saw that girl holding an LGBTQ patch with tears in her eyes, and another holding a Black Lives Matter patch … it’s about empowerment of young people, to give them a safe haven. ‘This is who I am, and I’m accepted here.’ That’s who we are.”

It’s a workplace where they can have a little fun, too. The airplane theme is obvious from the first sight of the building’s hangar-like design. Guests who pull into the Fly Pie driveway are greeted by two linebusters (“like Chick-fil-A,” Godino said, in one of many references that make it clear they’ve studied efficient operations).

These linebusters are dressed like airplane mechanics and equipped with airport-style lighted wands to help them guide traffic. After the customer goes through the contactless ordering and payment process, they’re directed into the hangar-like tunnel, four vehicles at a time, where the entertainment begins. Six ultra-high-resolution projectors costing $35,000 each cover the side walls of the tunnel with an original show featuring 10 animated characters conceived by Zuiker. Alert guests will notice aromas wafting their way — bread baking, perhaps, or the cinnamon-and-sugar temptations of a churro.

And then, about 150 seconds after ordering, they’ll drive forward to pick up their food. The menu includes New York-style pizza, made with water formulated to replicate the city’s own, as well as loaded fries, wings, deep-fried Oreos and churro tots.

Godino said two more corporate locations are planned for openings next year, with leases signed for parcels at Blue Diamond Road and Decatur Boulevard in Las Vegas and Craig Road and North Fifth Street in North Las Vegas. They plan to eventually open 12 corporate locations in Southern Nevada, and to begin franchising as soon as next year.

In the meantime, they’re selling shares in the company, and bringing prospective investors in to take a look and try the pizza, such as the two pilots who stopped by Wednesday. Investors learn about not only the food and creative presentation but also the efficiency of the operation. The building is based on an Xtreme Cube from locally based Ahern Manufacturing.

“It’s as tight and efficient as possible,” Godino said.

They’re also planning community involvement. Zuiker said the company has 7½-foot-tall sports-style mascots for each of the characters, such as the dough ball and the garlic knot.

“They might show up at your school,” he said. “Or your firehouse. It’s just heart-smile stuff that makes us unique.”

And it all stems from a chance meeting. In November 2019, Zuiker, who grew up in Southern Nevada but now lives in Malibu, California, had come to town for his mother’s open-heart surgery at St. Rose Dominican Hospital’s Siena Campus in Henderson. When she died before the surgery, a traumatized Zuiker and his wife, in search of a refuge, chanced upon Born and Raised across Eastern Avenue, and he was impressed by the operation and the feeling of hospitality.

“In the head space I was in, I still thought, ‘This place is pretty cool,’ ” he said. He was back Saturday, then for Sunday night football, and asked to speak to the owner: Maybe a Born and Raised in Malibu?

Godino, who had noticed the year before that takeout and delivery were a growing segment of his business, had been thinking about a drive-thru pizza concept. He’d already raised about half of the $1.2 million he thought he needed, and had the site. He showed Zuiker his tentative plan for Fly Pie.

Zuiker, too, had been working on a plan: Fly Pies, in an example of great minds thinking alike.

“I had the concept but nobody who could pull it off,” Zuiker said. “What happened in that room in Henderson I’ll never forget.”

And so the project — and the budget — grew, each learning about the other’s side of the business.

“I had no idea it was this much work,” Zuiker said. “I went through the school of hard knocks, Scott Godino-style. He let me do what I do best, which is storytelling.”

The partnership, he said, has the affinity of chocolate and peanut butter.

“I couldn’t have imagined this in a million years,” Godino said of the result.

“I believe Scott’s concept without me would still be successful,” Zuiker said. “But I think this takes it to the top tier.”