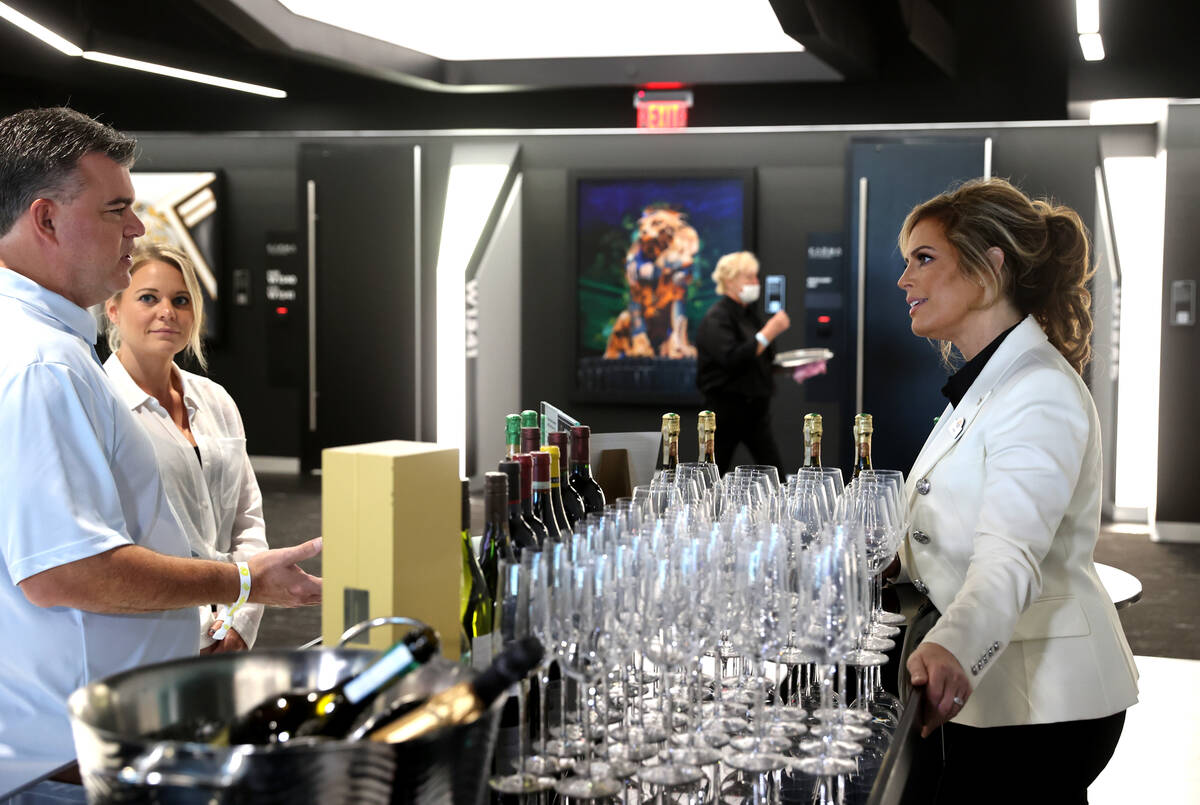 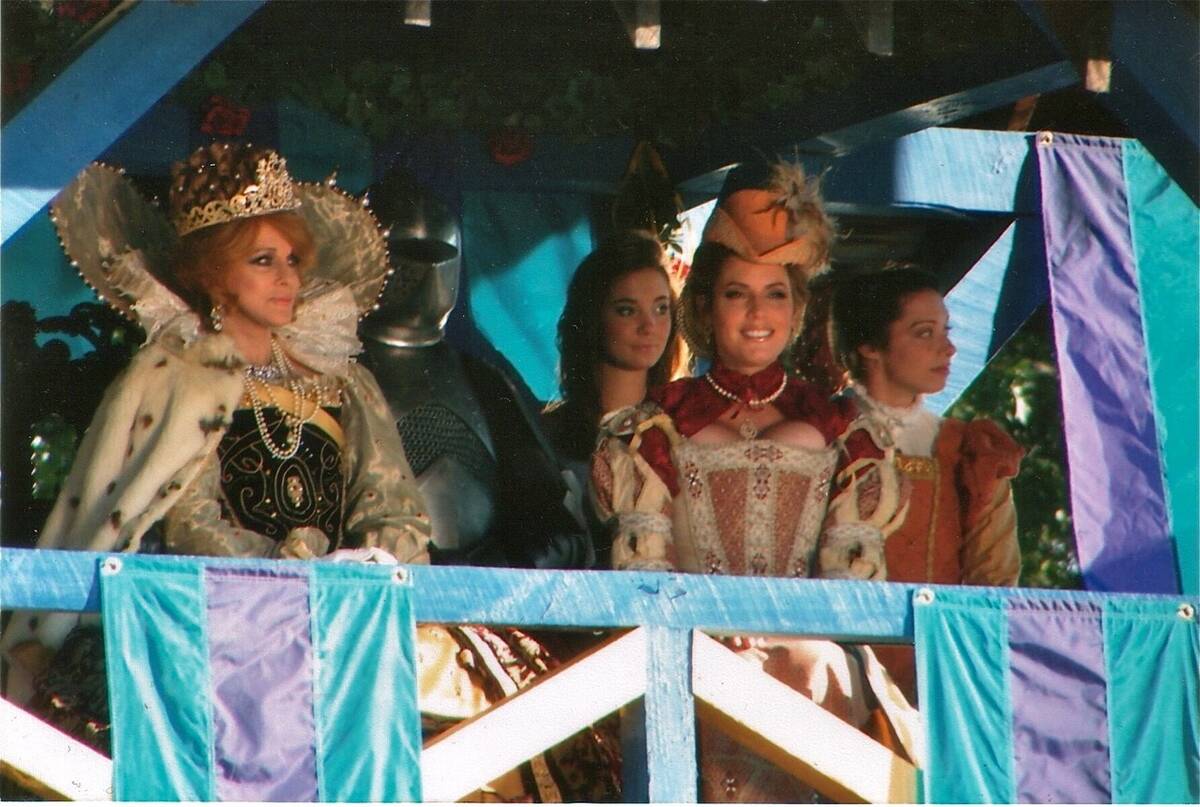 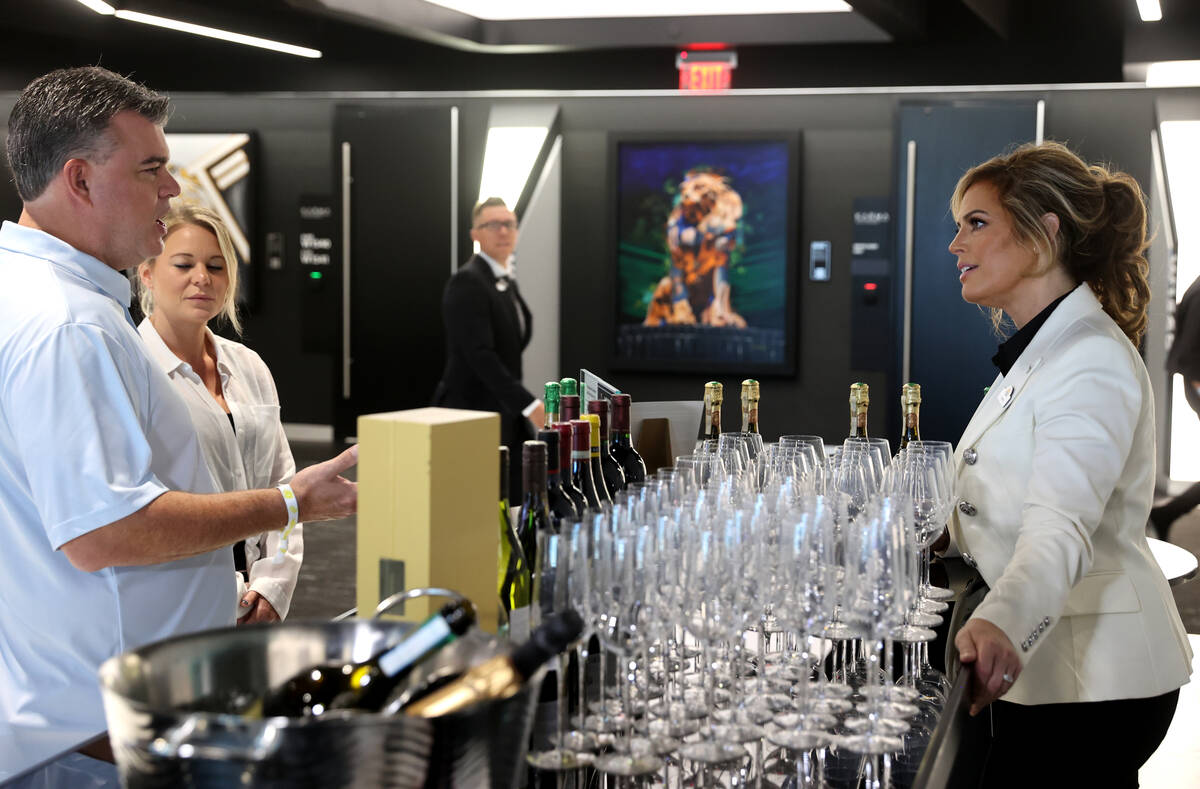 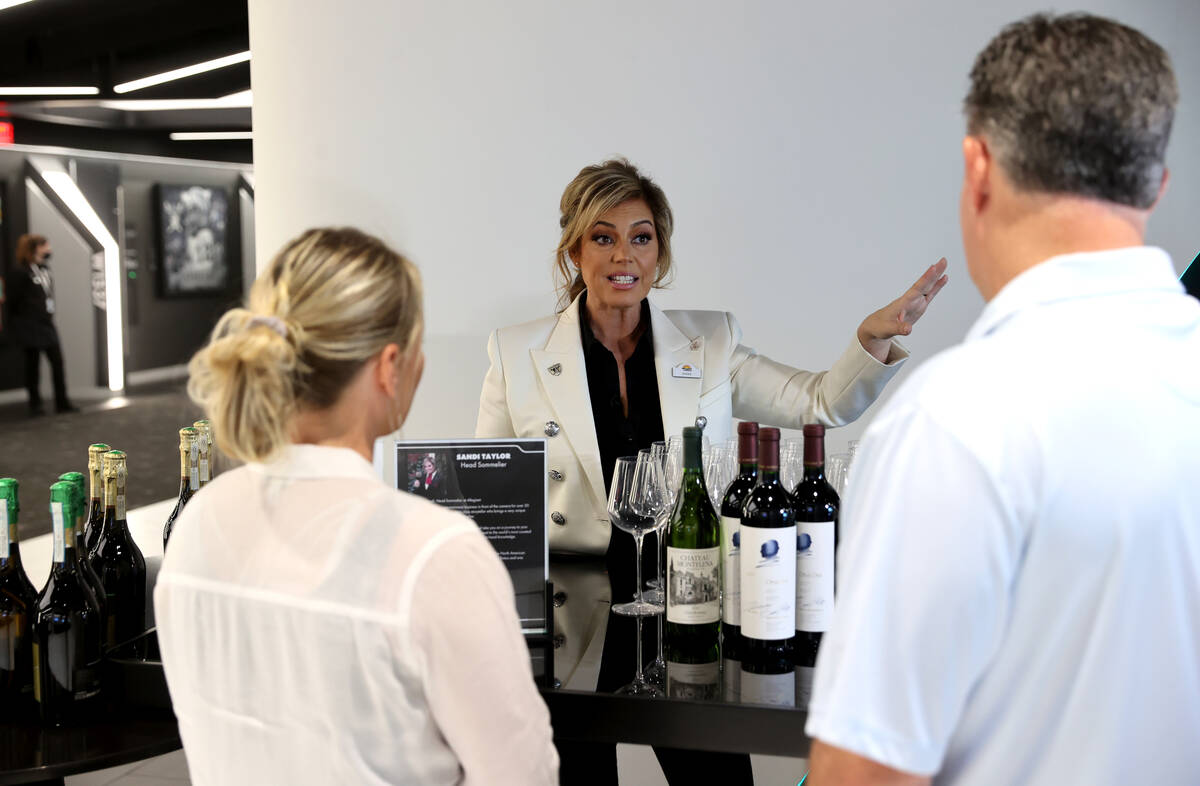 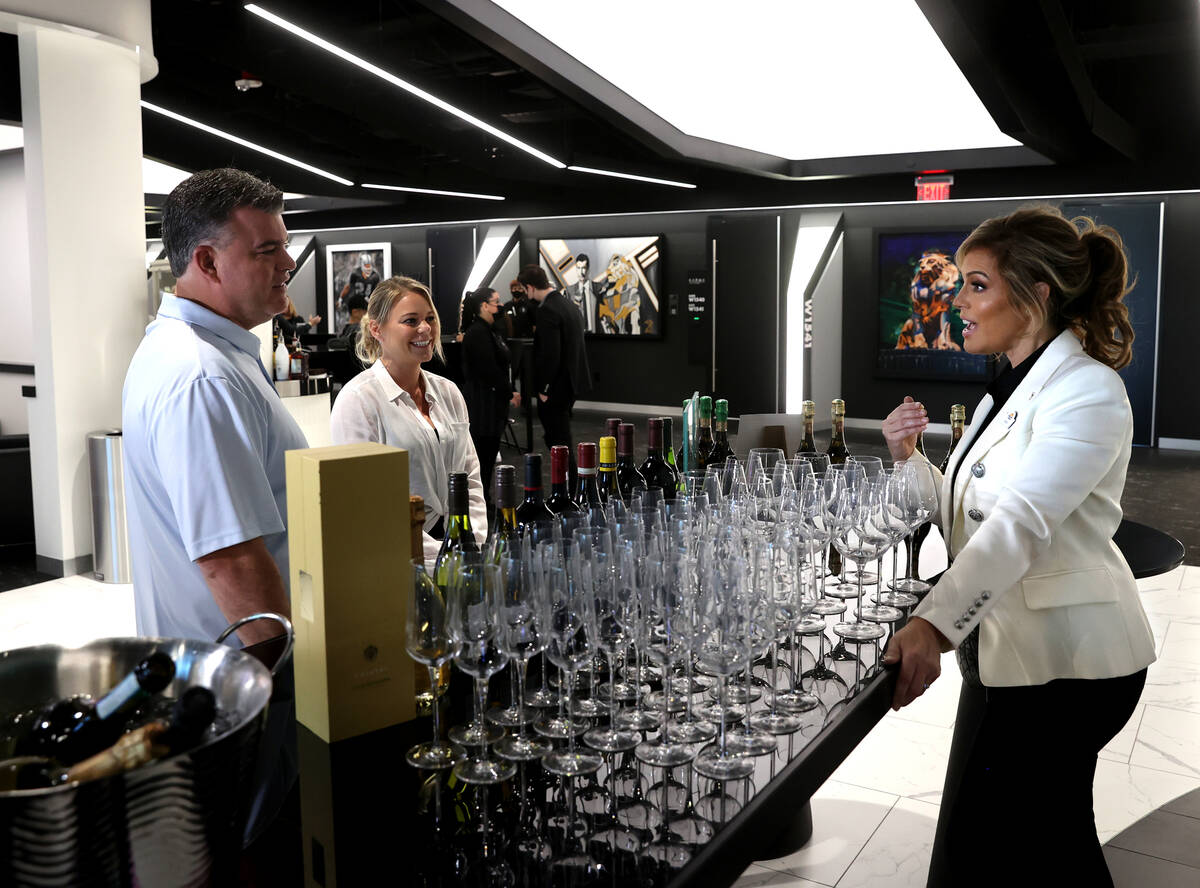 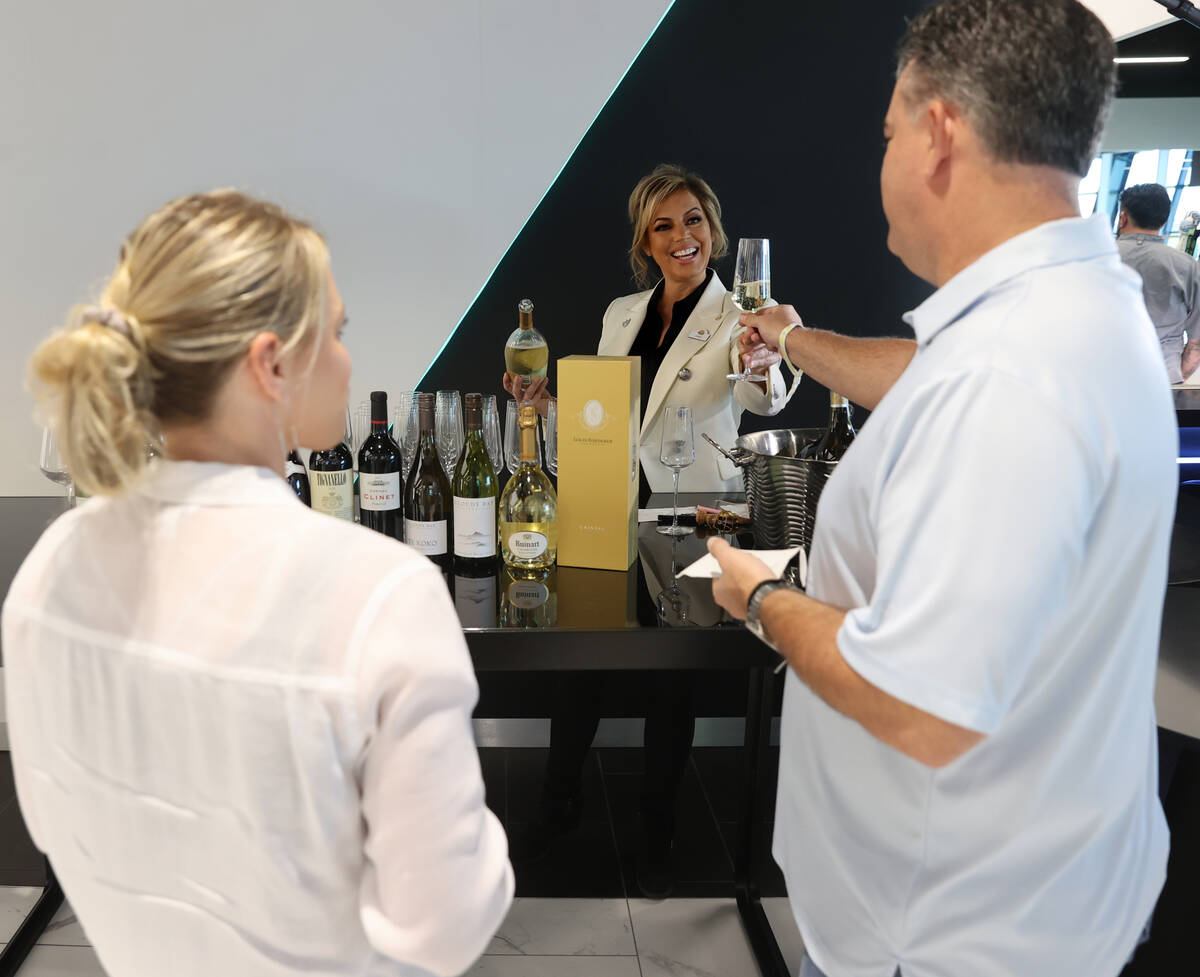 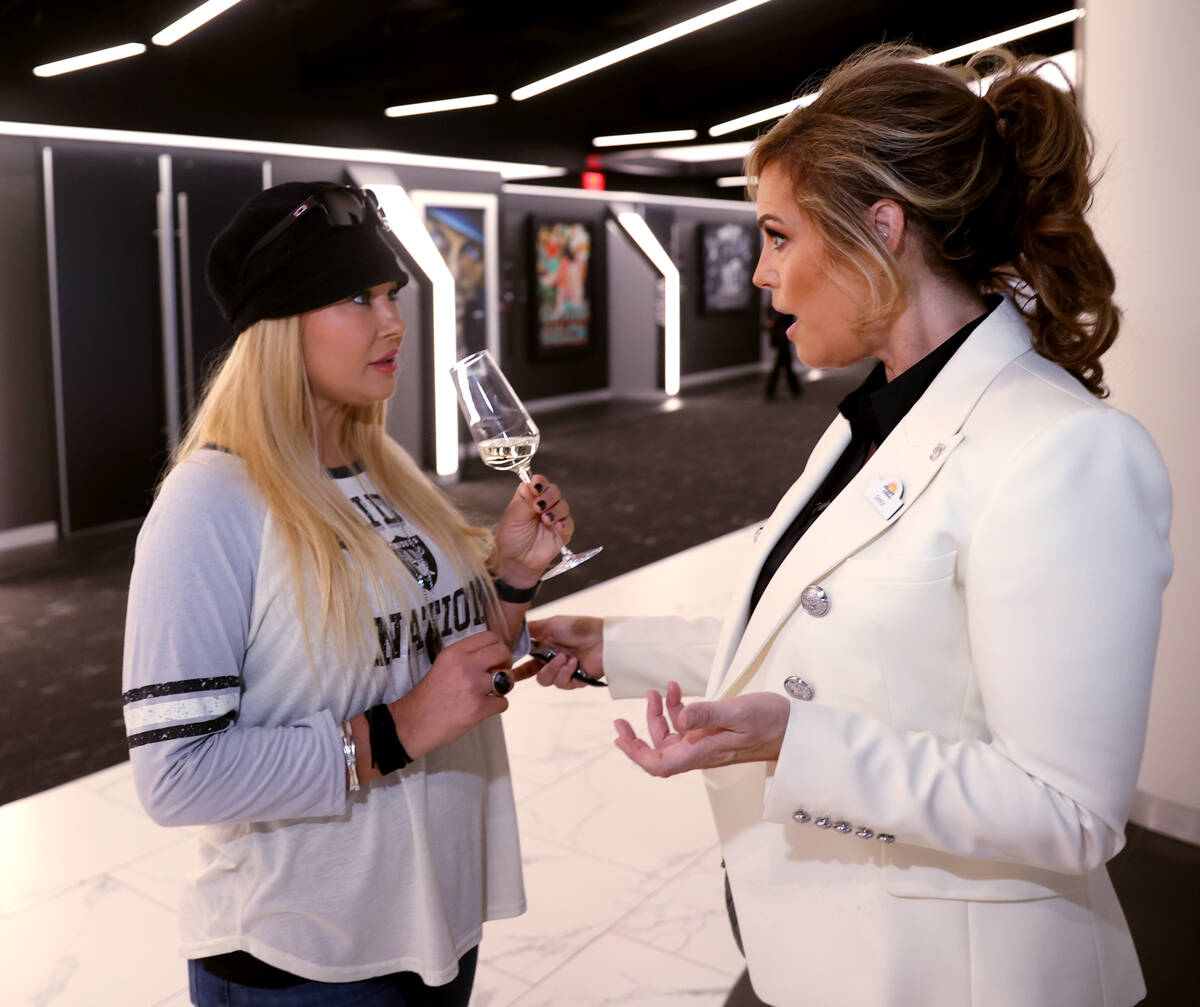 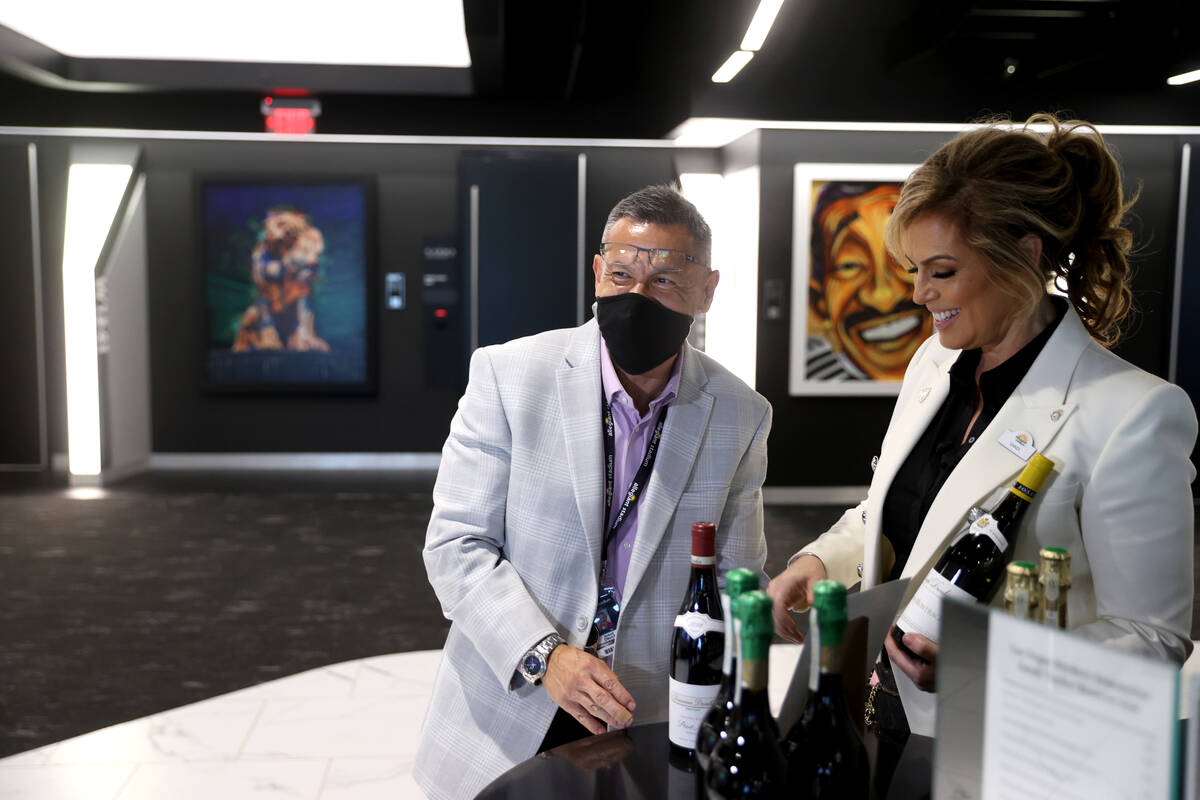 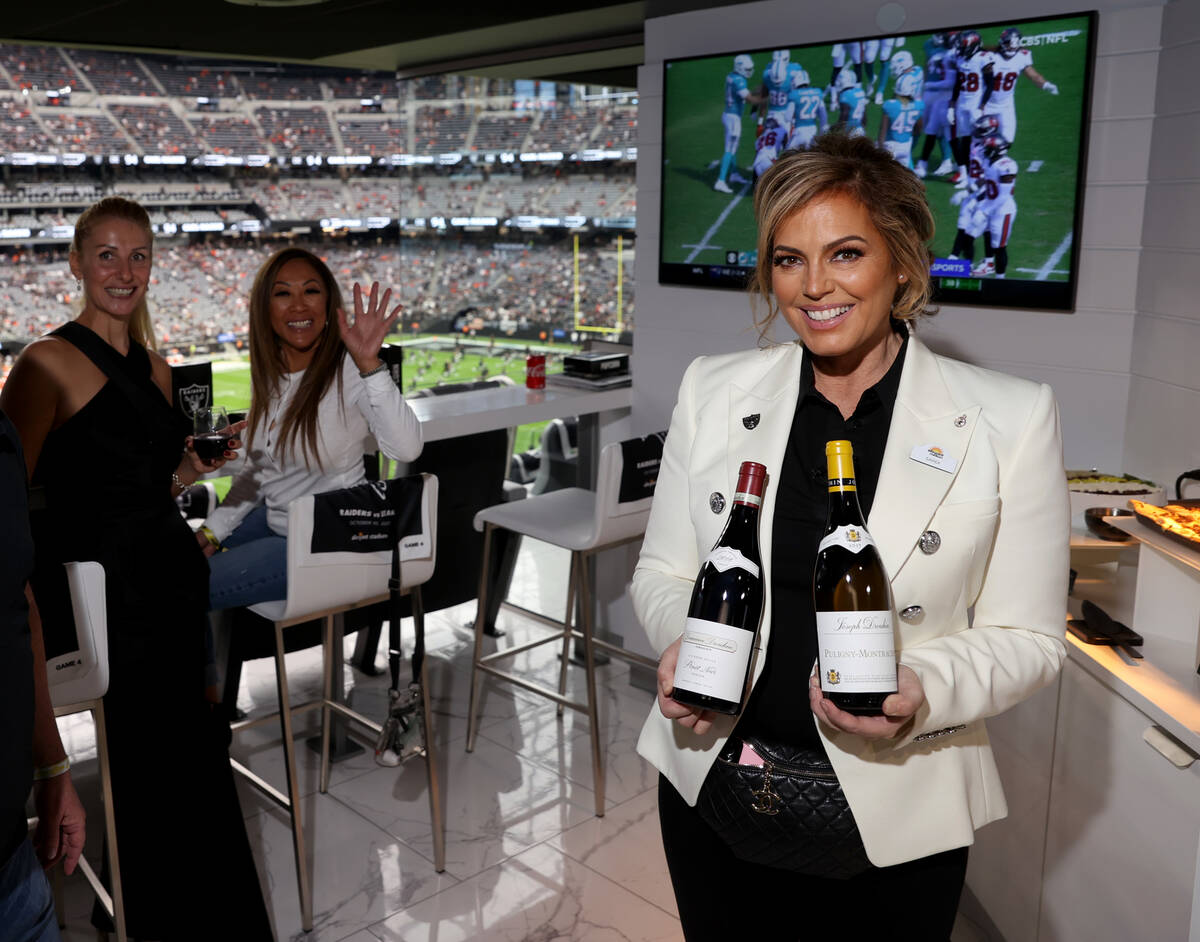 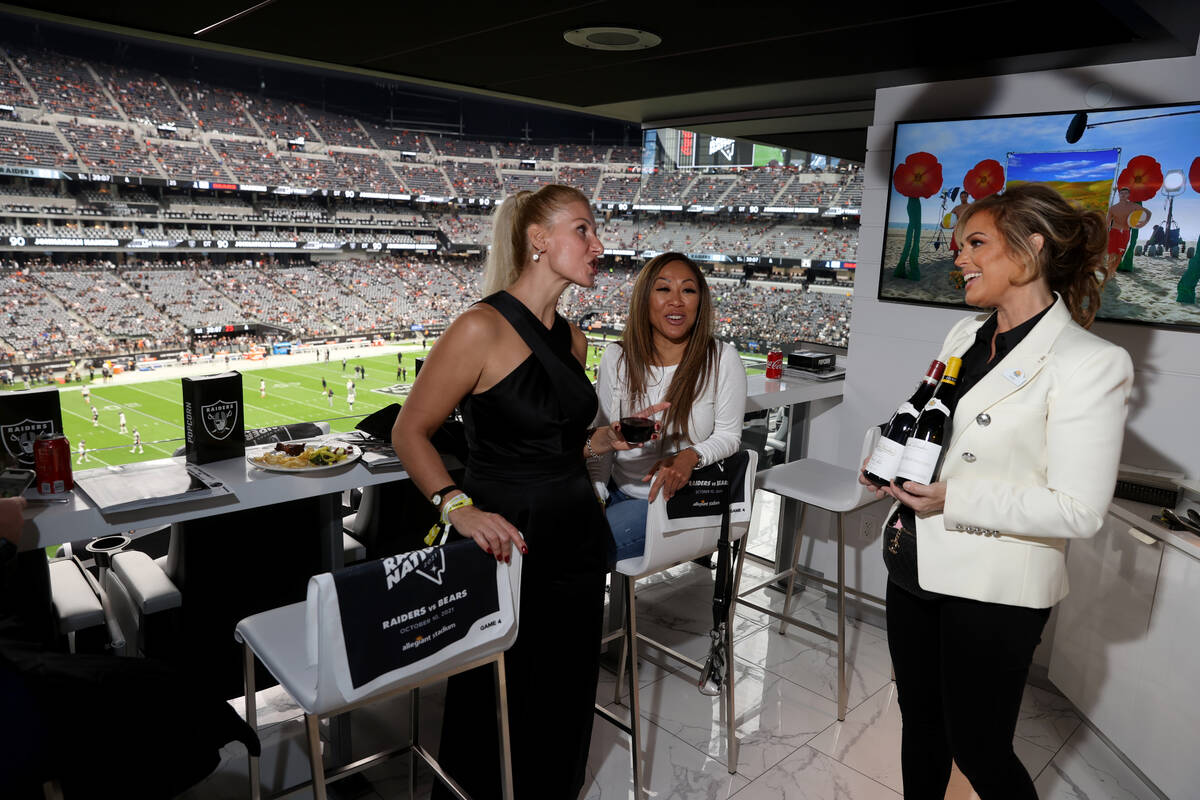 Sandra Taylor, head sommelier at Allegiant Stadium in Las Vegas, right, shows some of her wine collection to Jorida Tabaku, left, and Coco Barr, both of Las Vegas as the Raiders take on the Chicago Bears during an NFL football game Sunday, Oct. 10, 2021. (K.M. Cannon/Las Vegas Review-Journal) @KMCannonPhoto 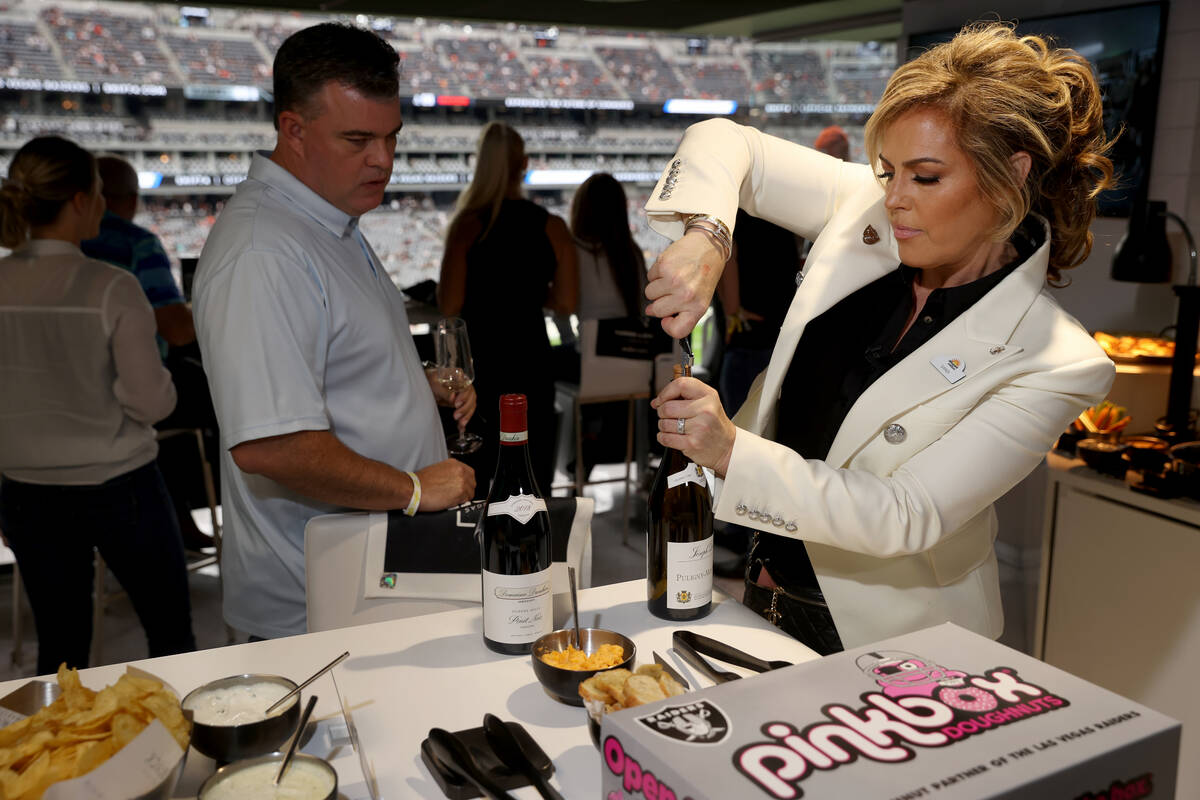 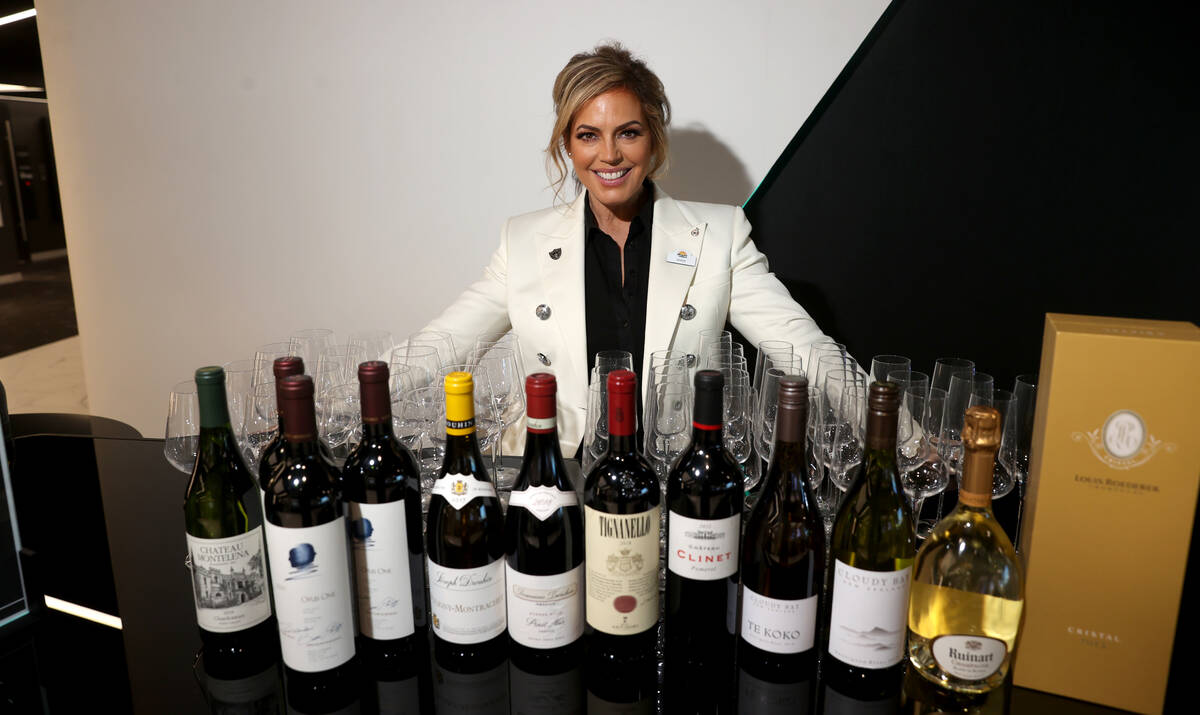 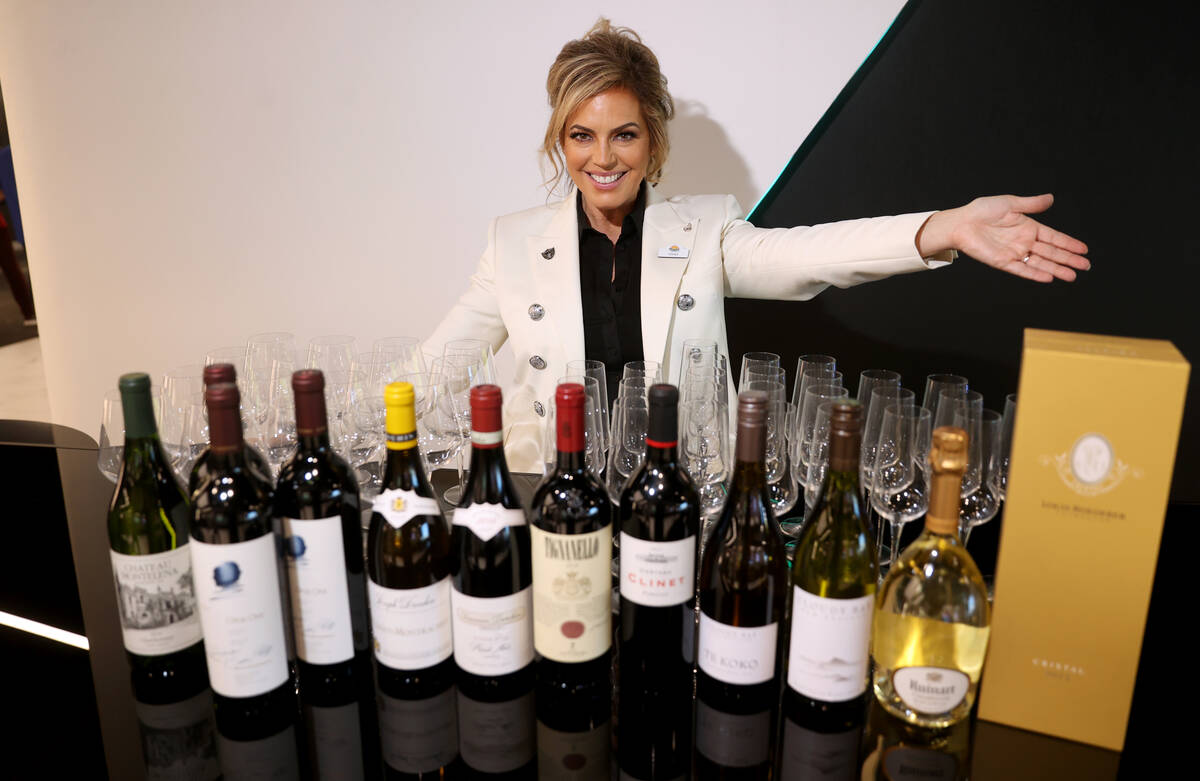 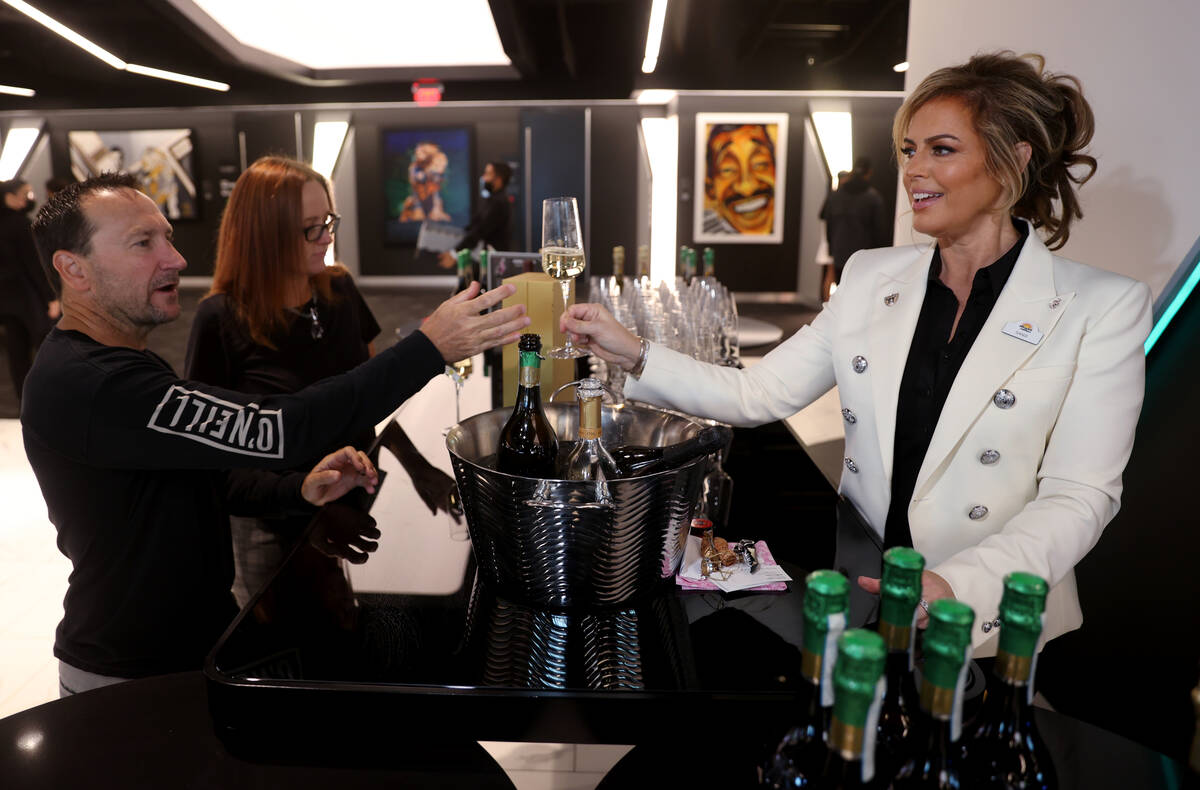 No doubt about it, Las Vegas has plenty of things you’re not likely to find anywhere else. And now those include an NFL stadium with a wine program, complete with sommelier.

Before you get too excited, be aware that if you buy a plastic cup of wine from a snack window along the concourse, there won’t be anyone stopping by to advise on the best varietal to go with your hot dog. The service is reserved for suite holders on the 150 level. Still, it’s rather revolutionary.

“It’s a first for any NFL stadium,” said Sandra Taylor, who, as Raiders sommelier, presides over wine cellars at either end of the stadium and does tastings with people in the suites. “The only stadium that has even a slight wine program is San Francisco, just because of Napa” and its proximity to the famed wine region.

“I think it’s going great,” Raiders owner Mark Davis said of the program, though he doesn’t drink himself. “I think it’s very unique for our fans. The game-day experience is really important to us. It’s something we wanted to add.”

Being a sommelier actually is Taylor’s second act — or second half, if you will. A native of Westchester County, New York, she had planned to follow in the footsteps of her father, an esteemed mathematician, until his death prompted a change of heart. At a friend’s suggestion she got into modeling, and started doing commercials.

Taylor moved to Los Angeles — “I felt I was a little more Los Angeles than New York” — and soon met celebrated director Garry Marshall. He became a mentor, casting her in at least 20 of his films, including “The Princess Diaries” and “Princess Diaries 2.” In total, she appeared in about 40 feature films and at least that many TV shows.

“He always told me to have a Plan B,” Taylor said. “I didn’t know what my Plan B would be. He suggested I write down a page of things I love, that wouldn’t feel like work if I did them.”

She’d always loved art, so that was a possibility. But she had another special skill. “I’ve always had this crazy nose,” Taylor said. “At 16, I could tell women what perfume they were wearing. I knew it was going to be either wine or art.”

When Marshall died in 2016, she decided wine was her Plan B and threw herself into her studies, earning a sommelier certification in 2018. A job at Miro restaurant in downtown Los Angeles followed.

“I remember I was down in the stock room,” she said, “stocking shelves and sweating profusely, and thinking to myself, ‘What have I done? Two years ago I was in a film with Jason Sudeikis and Jennifer Aniston.’ ”

Still, she said she loves her new field: “I don’t even mind not auditioning.”

When Miro closed at the start of the pandemic, she knew she’d have to find something else and thought about how to combine her 30 years as an actress with a career in wine.

“I didn’t want to go table to table in a restaurant,” she said. “I wanted to tell stories; I think storytelling is so important in wine.”

Taylor had volunteered with NFL Charities since 1991 and got to know Davis through mutual friends. She was at the Super Bowl in Miami in 2020, and he was talking about the stadium he was building in Las Vegas.

“I said, we should put in a beautiful wine cellar in the stadium and put in a wine program, because it is Las Vegas and it is the entertainment capital of the world,” she said. “I can bring my storytelling to the suite owners. We can do tastings, and elevate the wine experience.

Davis knew Taylor could make a success of such a program. “I was there at the beginning, when she was a rookie,” he said. “When she gets her mind set to something, she finishes the job.”

This season, Taylor is at every home game. “I have seen a huge interest in the wine program,” she said. “On the 150 Level, you have people who are huge wine enthusiasts.”

She recently met a man who was a pinot noir enthusiast and drinks the best in the world, including Domaine Romanée Conti, or DRC, which she said sells for $3,000 to $60,000 a bottle.

“Through all of my research and studies, I found this beautiful wine out of Oregon, which has the same longitude and latitude of Burgundy,” she said. “That’s why the pinot thrives there. I found a distributor and winemaker, Dundee Hills. He bought it and he flipped out.” By comparison, she said, the wine is less than $400.

“What I try to do on our premium list is to, of course, have those premium, high-end wines but also the gems I have found — a great pinot noir that can rival a Burgundy,” she said. “This was one of the best I’ve ever had. He happened to agree with me. You have these fun little conversations. It’s fun to tickle each other’s brains about wine and geek out.”

He noted that an emphasis on food and wine at sporting events, which has evolved into tailgating, has a long history, dating to aristocrats taking big picnic baskets to horse races.

“Adding a sommelier at the Allegiant just brings the experience full circle,” he said. “Guests spend a great deal of time at the stadium. The sommelier really elevates that experience.”

And Taylor is reveling in that process.

“What I’m loving is I’m really getting to know the suite owners by their first names and build a relationship,” she said. “I want to see this 10 years down the road, where it’s a huge success and I’m building collections for each of the suite holders. I love doing this for Raiders fans.”

Including one very famous one. Taylor said actress Ann-Margret has long been a devoted Raiders fan and attends every home game. Taylor worked with her in “All’s Fair in Love.”

“I gave her a hug and said hi to her,” she said. “It was so nice to reconnect with her. That was one of the highlights of my year so far.”