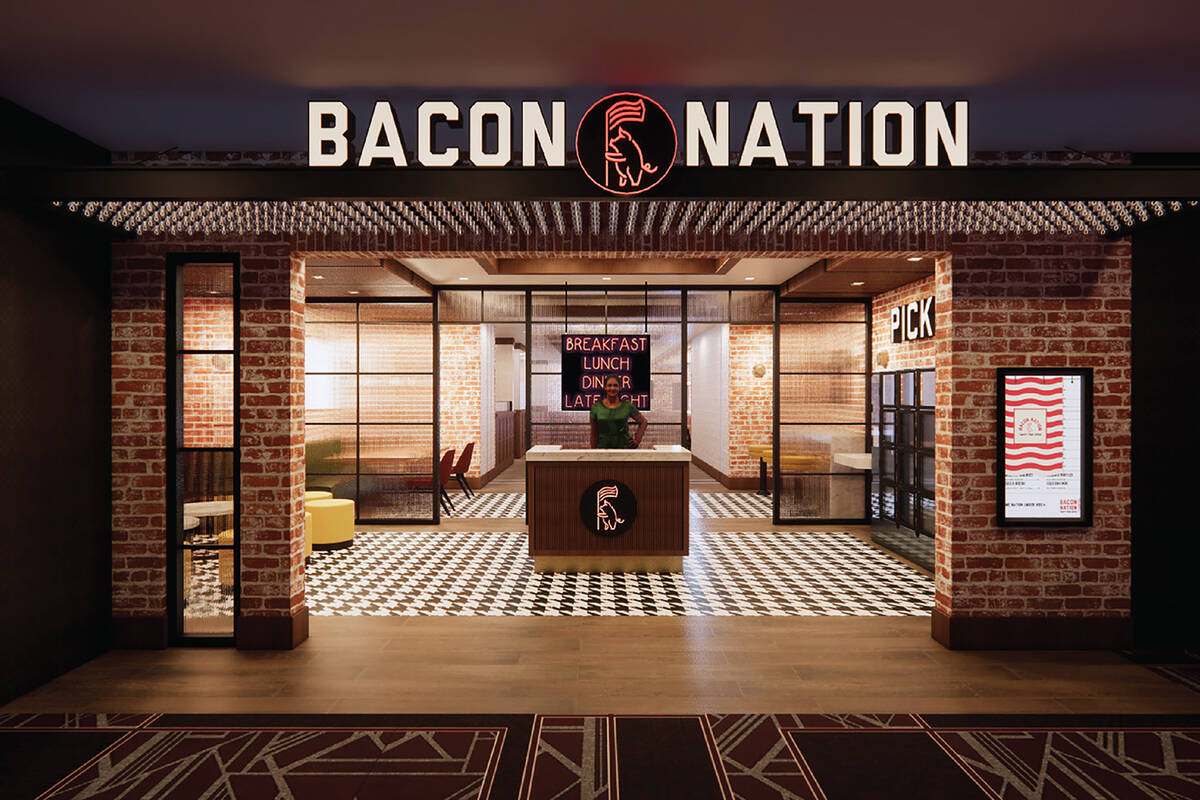 A rendering of the entrance to Bacon Nation, a 24/7 restaurant with dozens of bacon dishes, set to open in fall 2022 in The D hotel-casino in downtown Las Vegas. (PGAL) 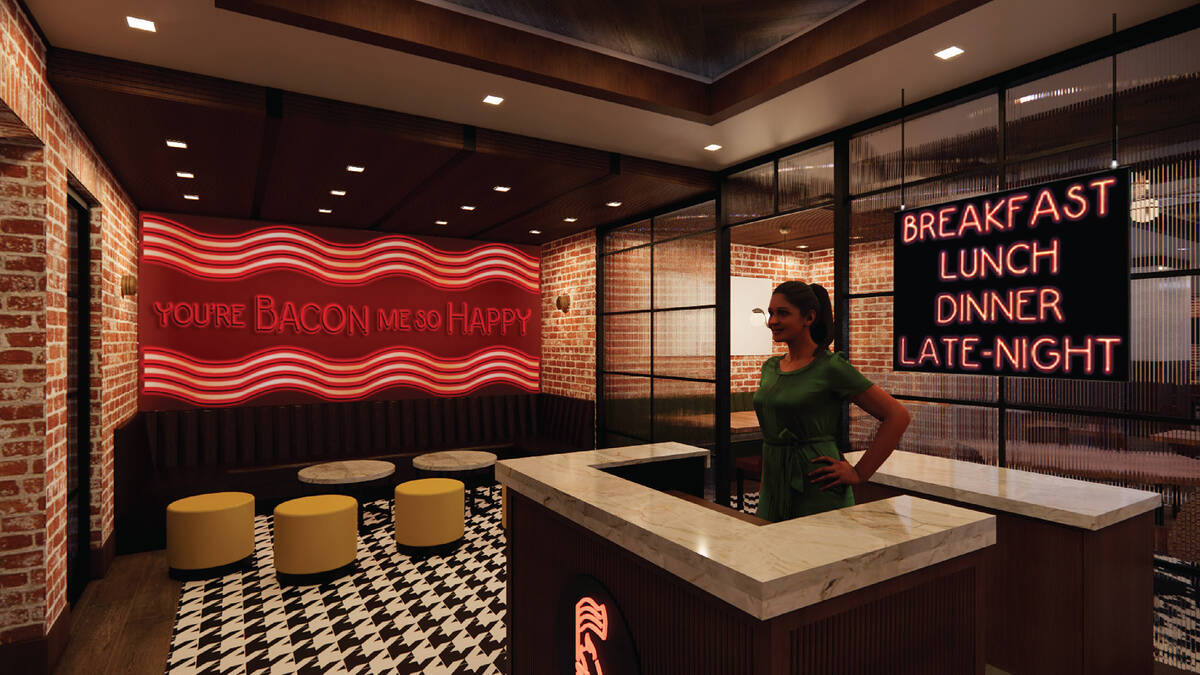 A rendering of the host stand at Bacon Nation, a 24/7 restaurant with dozens of bacon dishes, set to open in fall 2022 in The D hotel-casino in downtown Las Vegas. (PGAL) 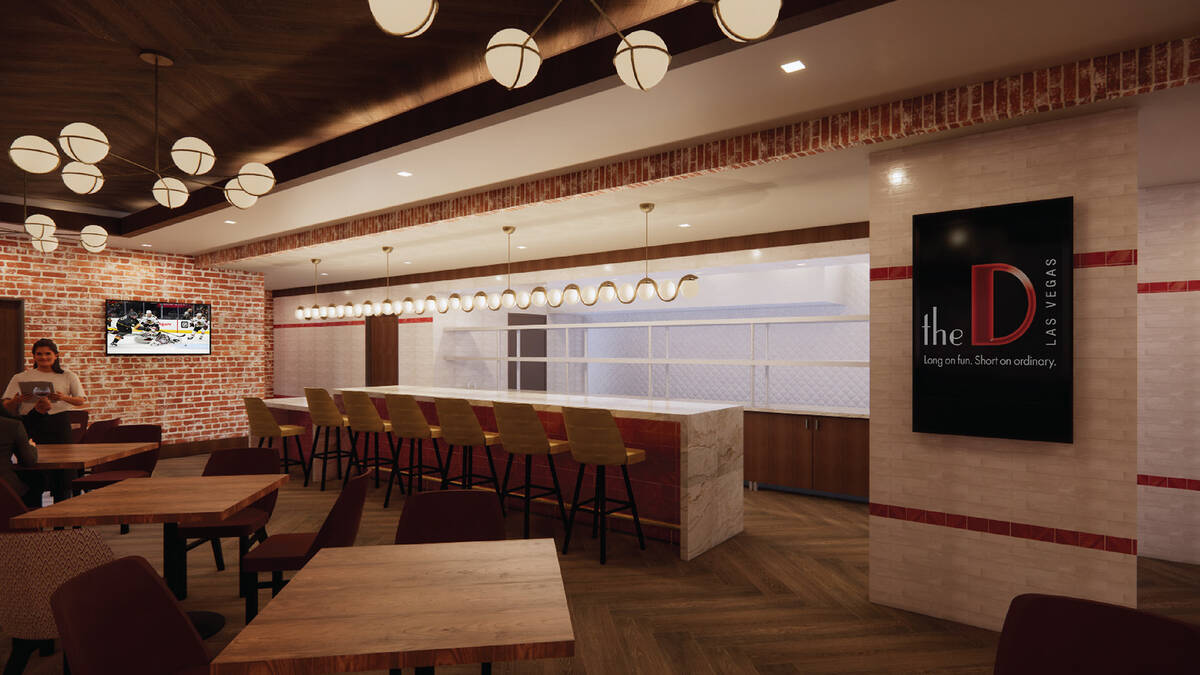 A rendering of the dining room at Bacon Nation, a 24/7 restaurant with dozens of bacon dishes, set to open in fall 2022 in The D hotel-casino in downtown Las Vegas. (PGAL) 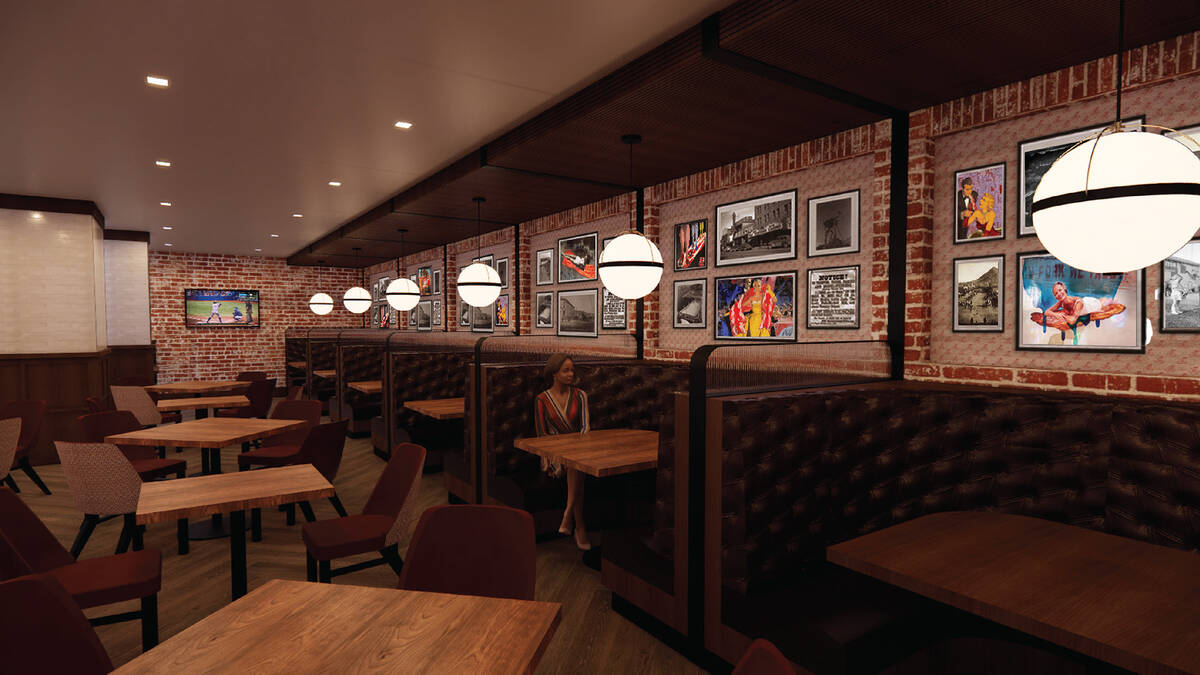 A rendering of the dining room at Bacon Nation, a 24/7 restaurant with dozens of bacon dishes, set to open in fall 2022 in The D hotel-casino in downtown Las Vegas. (PGAL)

This fall at the D, B is for Bacon.

Fall is when Bacon Nation, a 24/7 restaurant celebrating bacon and other porcine pleasures of the plate, is set to debut on the second floor of the D Las Vegas in downtown. Bacon Nation is part of a floorwide expansion that also includes more space for slots and doubling the size of the BarCanada sports bar.

In 2021, the property asked Downtown Hospitality Group of Vegas to create a restaurant to replace the D Grill, which had closed at the beginning of the pandemic. While the team was brainstorming, “we came up with the concept that everybody loves bacon,” said Abe Taylor, a founding partner of DHG and a partner in the new restaurant.

The executives bit, including the big kahuna: Derek Stevens, owner and CEO of the D, who, it turned out, was a big bacon fan. And on the second floor of the D, he thought pork would fly.

“There’s hardly a thing more universally loved than bacon. They had me sold in the various pitches about the different kinds of bacon and sauces. We think Bacon Nation will add another amenity into the D, and another amenity into Circa and the Golden Gate as well,” Stevens said, referring to the other downtown hotel-casinos he owns.

“It’s the right restaurant with the right people in the right location. It’s a great new thing coming to downtown Las Vegas.”

Taylor and Greg Costello, also a founding partner of DHG and a partner in Bacon Nation, are partners in 18Bin, an Arts District spot known for its seasoned french fries with dipping sauces.

“It’s a staple that we wanted to be very good at the restaurant. Building that staple — you have to go back there for the fries,” Costello said. “Following along on that concept, we look at bacon as another staple. Bacon is our french fry.”

Some would say bacon has had its time, at least as an ingredient of the moment. Who can forget those crisp fatty days a decade ago when bacon moved from menu ubiquity to the personal care aisle, with items like bacon lotion? Or bacon toothpaste?

But treating bacon as a staple, as a culinary fundamental, moves it beyond the whims of food trends and Instagram.

“I don’t think bacon ever goes out of style,” Taylor said, and the numbers bear that out. In 2020, nearly 270 million Americans ate bacon, according to food industry research.

Bacon every which way

DHG is still developing the menu for Bacon Nation in partnership with chef Josh Green. The menu will offer about 55 to 65 dishes. “I don’t want to say we’re reinventing bacon, but we’re bringing bacon in ways people haven’t seen before,” Taylor said

Consider bacon flights featuring different styles and flavors. Or boozy adult milkshakes, like an Elvis version made with peanut butter whiskey and garnished with a miniature peanut butter bacon sandwich (an Elvis favorite). Or a reverse BLT, where woven bacon strips replace the bread.

“It’s a bacon bun, if you will,” Costello said.

And the pig isn’t represented only by bacon. Pork belly, pulled pork, pork rib and pork shoulder dishes are also planned. And even those dishes that don’t initially contain pork can get piggy wit it.

“Almost every single item can come with a bacon component,” Taylor said. “If you wanted to add candied bacon to your vanilla milkshake or adult milkshake, that’s an option.”

Bacon with a code

Bacon Nation will encompass about 5,000 square feet, with 130 or so seats. The restaurant will provide breakfast, lunch, dinner, brunch, late-night and takeout service. Bacon presents an ideal focus for this 24/7 coverage because it works in dishes for every service. (By contrast, you would not, for instance, do a 24/7 asparagus restaurant.)

For a few hours in the middle of the night, the partners said, the restaurant will shift to pickup service (especially handy because the D has no room service). Folks may digitally place orders (specifics to come), which are placed in special warming lockers accessed with a code.

It’s a 21st century take on the Automat — and a savvy move. Because at 3 a.m. in Vegas, a reverse BLT is hog heaven. 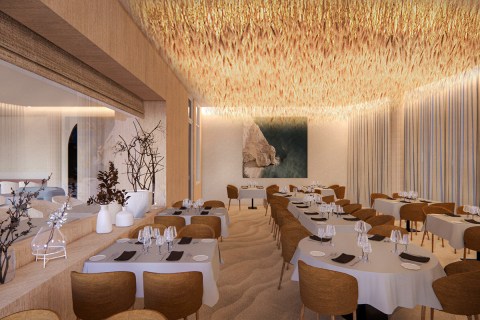