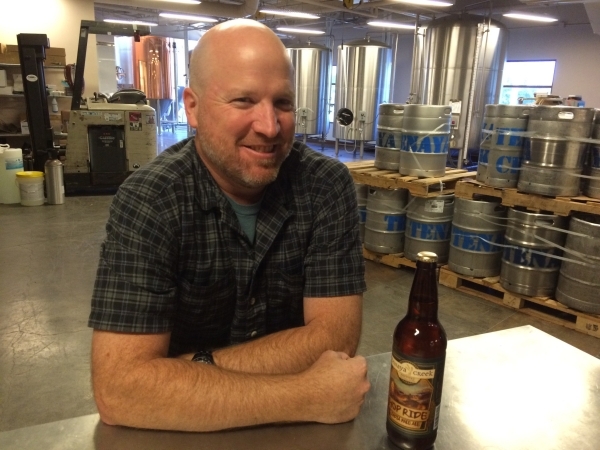 Tim Etter, whose family oversees operations at northwest-based Tenaya Creek Brewery, is shown July 15 discussing plans to move the brewery to a larger location downtown. The new site, across from the site of the former Moulin Rouge on Bonanza Road, will allow the company to brew even more quantities of its select brews, such as the kind on the table beside him. (Jan Hogan/View) 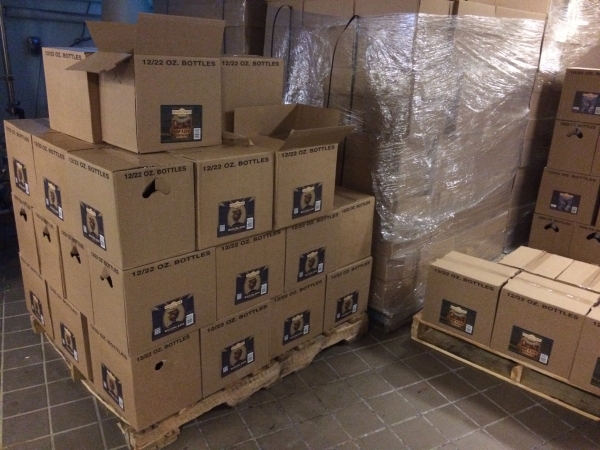 Cases of bottled beer wait July 15 to be delivered at Tenaya Creek Brewery, 3101 N. Tenaya Way. The local brewery plans to close its northwest location to move to one more than twice as big downtown. The new locale will also sport a pub aspect but no poker machines. It will also give tours. (Jan Hogan/View)

It’s been a favorite of many northwest locals for 15 years. Now, Tenaya Creek Brewery plans to close the property across from MountainView Hospital. The location features a pub of fewer than 1,000 square feet with video poker machines embedded in the bartop. The remainder of the building is devoted to making and distributing beer, visible through glass doors.

Local resident Matt Fujishiro comes to Tenaya Creek regularly. What does he like about the place?

“The service, the bartenders,” said Fujishiro, who added it was the kind of place where everybody knows your name. “I’m here on occasion, but it’s been every day this week.”

“Everyone is really disappointed,” said Baca.

The 7,800-square-foot building at 3101 N. Tenaya Way opened in November 1999 with three components: a bar, a restaurant and a brewery.

The restaurant portion was closed in 2008. The brewery and bar were doing well.

The brewery operation, which began with four fermentation tanks, at first supplied only its own operation, but things ratcheted up over time. In 2008, it began supplying beer to local outlets, about 200 kegs a year, Etter estimated. Its first account was Las Vegas Ski & Snowboard Resort. More outlets came on board, and the brew portion of Tenaya Creek expanded. So, in 2010, more fermentation tanks were moved in.

“Last year, we decided we’d expanded as much as we can here,” Etter said. “Ceiling height is important. … We maxed out here. The (original brewery area) has 19-foot ceilings, but the large part is only 12 feet. So, we can’t add more tanks.”

Tenaya Creek now sports 12 of the tall, shiny capsules. But the new tanks are not as large as the owners would like, restricted by the ceiling height.

Added to the equation was the fact Tenaya Creek’s principals — Etter, Christina Roush, Vince Telles and Dan Etter — were now focused on expanding its reach.

“That facilitated the need for us to find a bigger space. …We’re looking to go into Colorado and New Mexico and more markets in California,” Etter said. “California is so big. It’s like another country with their population.”

Tenaya Brewery found a warehouse location for its new home at 831 W. Bonanza Road, a former plumbing supply warehouse built in 1952, across from the former site of the Moulin Rouge. The tanks at the northwest location are scheduled to be moved to the 13,000-square-foot property this fall. The new space has a truss ceiling, allowing for even bigger fermentation tanks.

“We’ll start with larger capacity tanks,” said Etter, “four times the size of what we have now. If we need to, we have the ability to expand to tanks eight times the size.”

What’s the vision from here on out?

“We’re a Las Vegas brewery, a Las Vegas company. I was born here,” said Etter, “so our roots are established. We want this to be our home and our emphasis. We want people to realize that with all there is to see here, Las Vegas is more than just what you see on the Strip.”

Plans are to open the new location by October. The current Tenaya Creek building will be sold. A potential buyer is already showing interest.

All 14 employees will be retained, and the expectation is to hire about six more the first year. That’s because Tenaya Creek is looking to become a destination for tourists and local brew lovers with a tap room and by giving tours, much like Coors and Budweiser do. Etter suggested they might have a carriage that goes around downtown and the Strip.

So, will there be Clydesdales on the 1½-acre property?

“No, we won’t have any horses,” he said. “Maybe some dogs or something.”