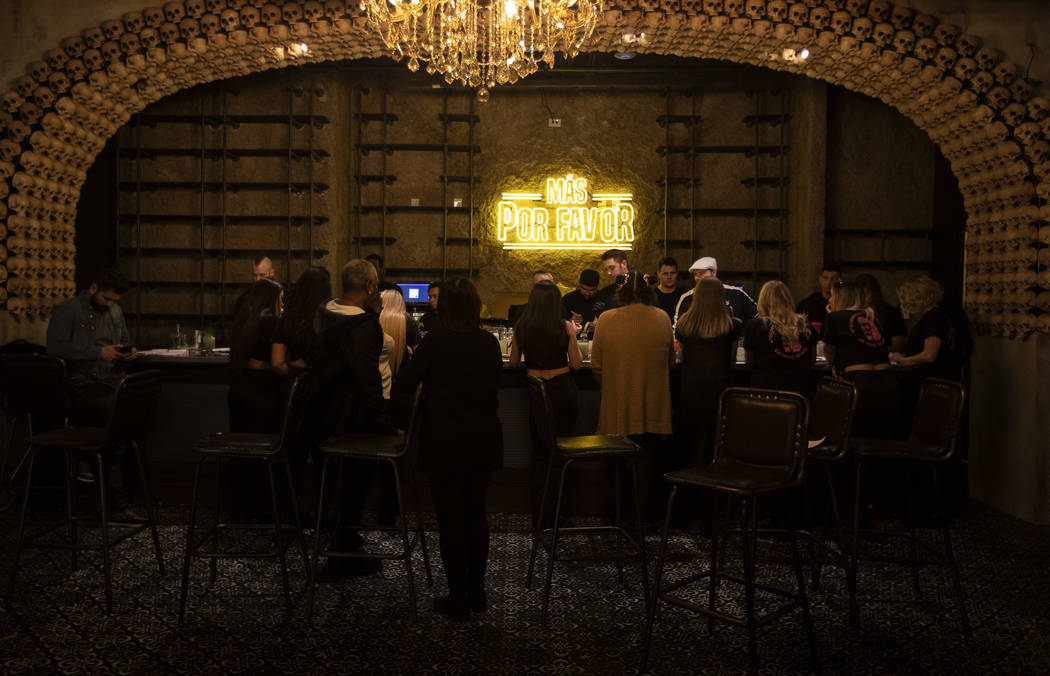 Employees participate in a bar training at the speakeasy bar in Más Por Favor Taqueria y Tequila on Friday, Jan. 17, 2020, in Las Vegas. Above them, an arch is made of fake skulls. (Ellen Schmidt/Las Vegas Review-Journal) @ellenkschmidt_ 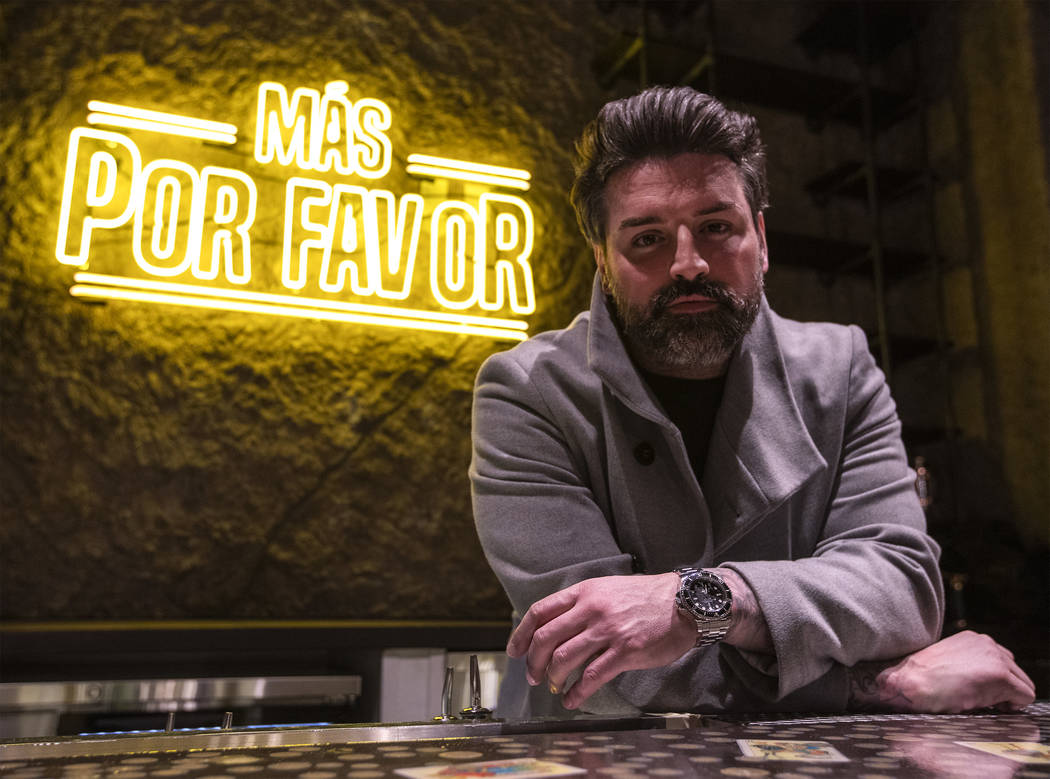 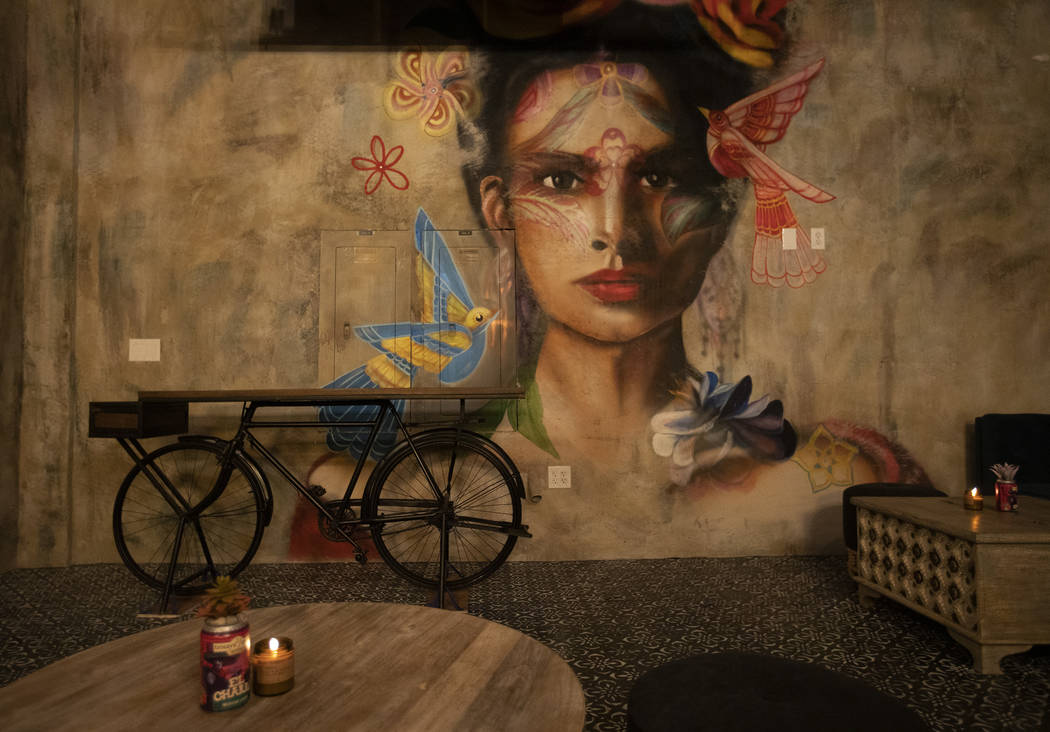 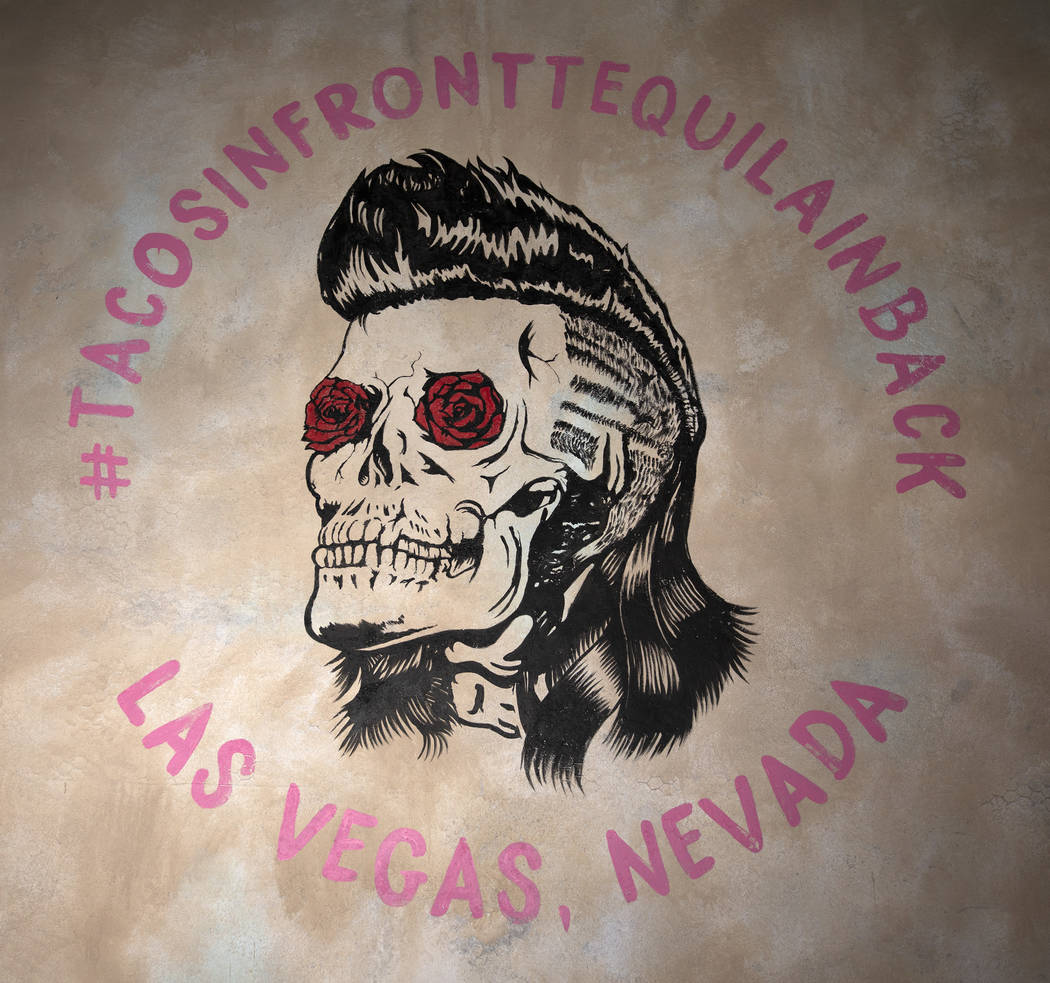 Working with Clique Hospitality spots such as Barbershop Cuts & Cocktails and Clique Bar and Lounge at The Cosmopolitan of Las Vegas, Ryan Labbe certainly has been familiar with high-style projects. Now that he’s planning his own place, it’s in a center with high-style neighbors such as The Golden Tiki and Partage.

So it’s only fitting that Mas Por Favor Taqueria y Tequila, which is set to open Friday, will be an Instagram dream come true.

Some of that is in the form of the art. One wall in the rear lounge area (also known as the “speakeasy parlor”) is dominated by an elegant portrait of a woman by Mallory Dawn, a local artist whose works are displayed at The Cosmopolitan and the World Trade Center in New York. In the front dining area (connected to the parlor by a tunnel-like structure) is a monumental, Dia de los Muertos-evoking skull by Koa Paden, a self-taught artist from Gardena, California, who has created works for numerous celebrity clients.

And the visual delights don’t end there. The lounge area is dominated by two arches reaching to the ceiling, one covered with nosegays of red roses, the other bedecked with skulls. The half-wall that separates the open kitchen from the dining room is covered with talavera tiles, near a spit where pork al pastore rotates as it roasts while sandwiched between two pineapple halves. That room also has numerous Casamigos Tequila barrels, tables constructed from wooden beams and painted metal chairs that bring to mind a Mexico city cantina.

Labbe said it’s his way of bringing some Strip-level fun style to a place for locals.

“A lot of the cool stuff seems to stay at the hotels,” he said. “There’s a whole other level of client out there. I wanted to open something that I would want to go to if I wanted to go off the Strip.”

Labbe said his fondness for Mexican cuisine made that a natural choice.

“It’s all the fun stuff you aren’t supposed to eat, which you want to eat late at night,” he said of the latter, such as Napoleon Make a Dang Quesadilla, the F-Bomb (based on a bag of Fritos) and elotes with a dusting of Flaming Hot Cheetos.

There’s an extensive list of specialty cocktails, house ‘Ritas on tap and of course plenty of cervezas.

As to why he chose Chinatown, Labbe cited his neighbors.

“It’s cool, it’s hip, but it’s approachable,” he said. “It’s been here for years, but you just discovered it. Chinatown — especially this plaza — is booming.”

It would be easy, he said, to have cocktails, dinner and late night at different places, all in the same plaza.