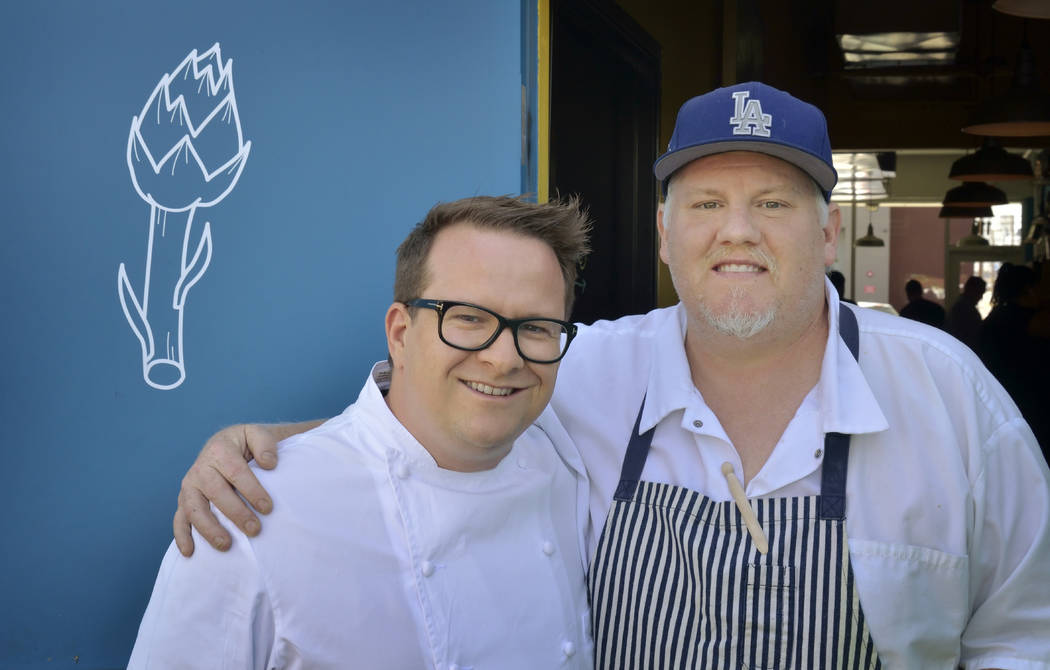 Chefs Brian Howard of Sparrow+Wolf, left, and James Trees of Esther’s Kitchen are shown outside of Esther’s Kitchen at 1130 S. Casino Center Blvd. in Las Vegas on Thursday, April 26, 2018. They are scheduled to participate on May 12 with other local chefs in Vegas UnStripped by Locals, which is billed as “a celebration of local independent Las Vegas culinary talent.” Bill Hughes/Las Vegas Review-Journal

Chef Sam DeMarco served his first public meal since returning to Las Vegas on Sunday, a pop-up brunch at 7th & Carson. And the veteran of First Food & Bar, Rattlecan and Sam’s American has more in store for the downtown spot. The chef, known as Sammy D to his friends, is taking on a consulting chef role that will see some of Sunday’s offerings added to the regular menu, alongside some new creations. Look for a new beverage program, wine list, menu and operating hours by mid-October.

Fall ‘Brawl’ in the books

During the fall edition of Back of the House Brawl Saturday night/Sunday morning, the team of Brian Howard of Sparrow + Wolf and Nicola Costagliola of Restaurant Guy Savoy took on Aria Café’s Sean Farney and Stack’s Adrian Jaime in the parking lot of The Sand Dollar Lounge, with Howard and Costagliola emerging victorious. Each team had to create one dish using white corn and squid ink and another using tuna canned in oil, hazelnut and orange torrone candy, artichoke puree and 200-day aged blue cheese.

Sweets in the spotlight

Nine of Las Vegas’ top female pastry chefs offered original creations built around Trefoils shortbread Girl Scout cookies Saturday night at Girl Scouts of Southern Nevada’s annual Dessert Before Dinner Gala. The top dessert, as voted by the audience, was an homage to Good Humor’s old-fashioned Strawberry Shortcake ice cream bars, created by NoMad’s Becky Quan. “My main focus,” Quan said, “was just to be a crowd-pleaser so everyone could enjoy it and have a fun time. I really love the Girl Scout cookies in general.”

The popular Southern Highlands Italian spot Spaghetty Western has temporarily closed to accommodate a renovation and expansion, with an eye toward an Oct. 10 grand re-opening. The restaurant is expected to double in size to accommodate up to 150 guests, with the bar area going from 10 to 22 seats. Speaking of the bar, local bartending veteran David Cooper has been lending a hand on the remodel, and upgrading the restaurant’s bar program. (You can still find Cooper mixing drinks at Vetri at the Palms.)

Chef Marc Marrone will open the brick-and-mortar Graffiti Bao on Wednesday. The former Tao Group chef launched the concept this year at T-Mobile Arena. Its success has inspired him to expand to the shopping center on the southwest corner of Buffalo Drive and Warm Springs Road.

The former Melting Pot space in Boca Park is being converted into a “Cantonese wine bar” called Chinglish. Chef/owner Po Fai Lam is expected to offer “authentic Hong Kong food” that will draw on that region’s Cantonese and British influences, with perhaps a touch of Portuguese. They’re also promising a well-curated wine list with bottles priced primarily in the $50 to $100 range. Look for an early 2020 opening, in time for Chinese New Year.

Assured Development has announced a new project on Water Street in downtown Henderson that will include an Anderson Dairy Creamery and Great Harvest Bread store, expected to open next spring.

Actor Wilmer Valderrama in a group including singers Maluma and Prince Royce and, at a separate table, rappers Travis Scott and Sheck Wes, at Beauty & Essex at The Cosmopolitan of Las Vegas. Actress/singer Vanessa Hudgens with friends at Lavo at Palazzo. Rapper Baby Jake at Lavo and at Tao at The Venetian. Vegas Golden Knights right winger Ryan Reaves and defenseman Jon Merrill at MB Steak at the Hard Rock Hotel. 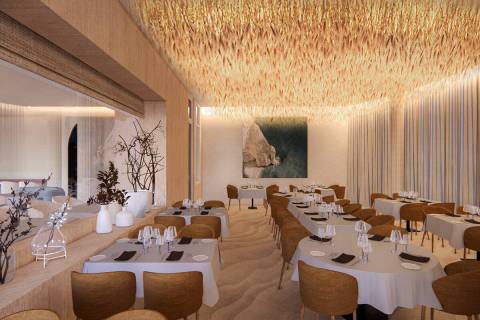