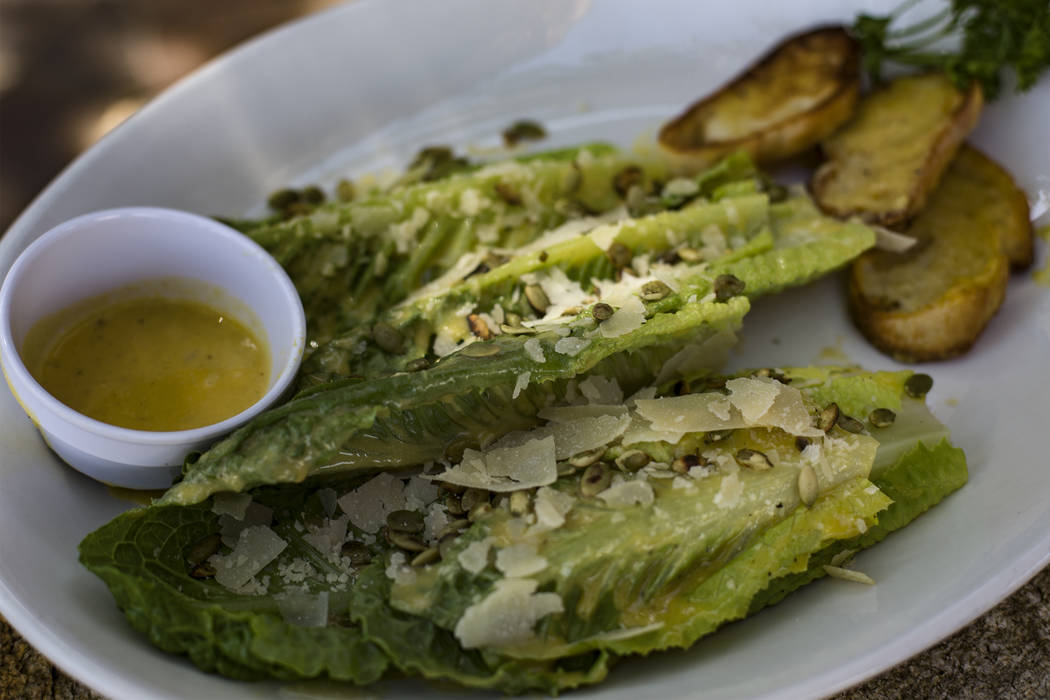 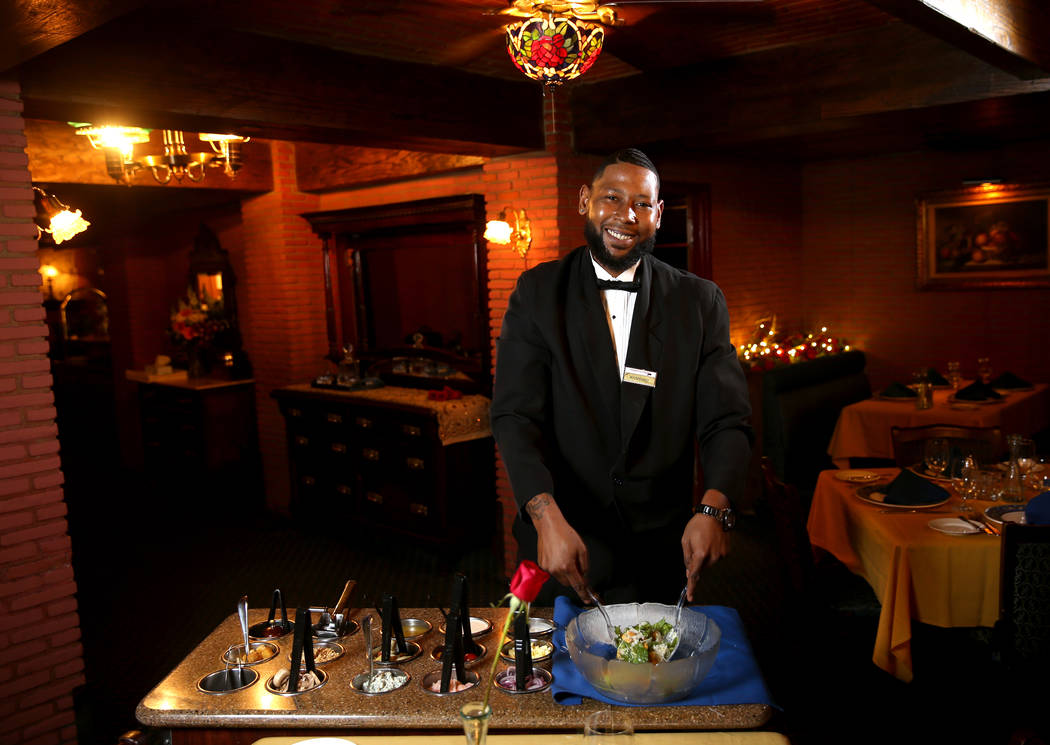 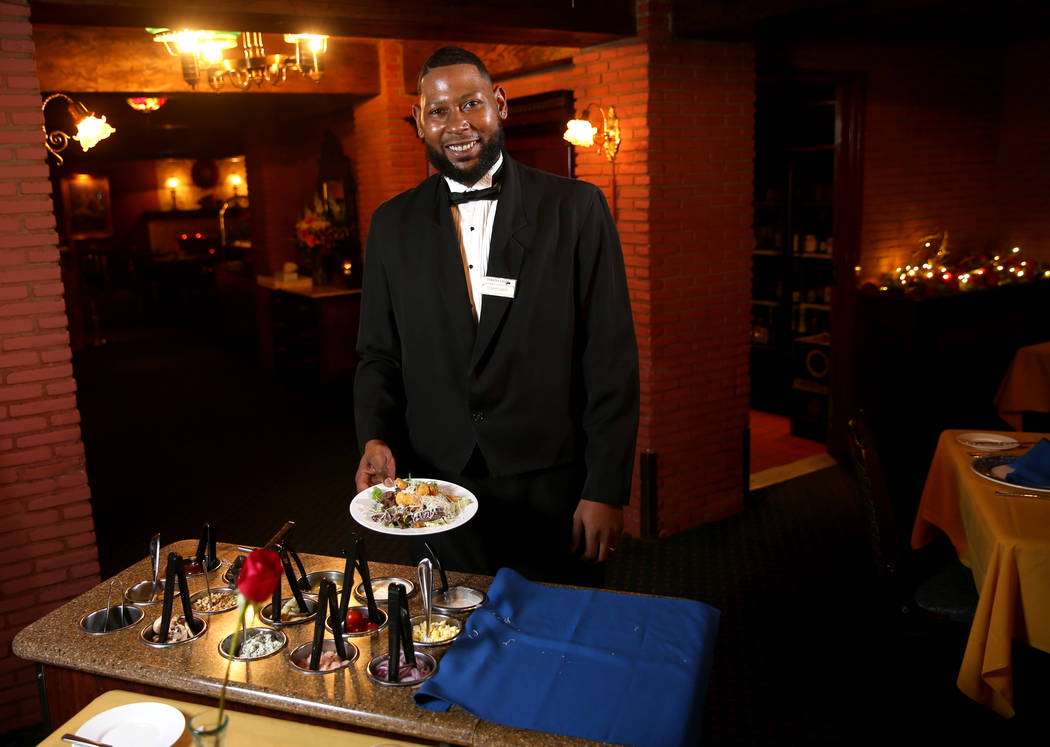 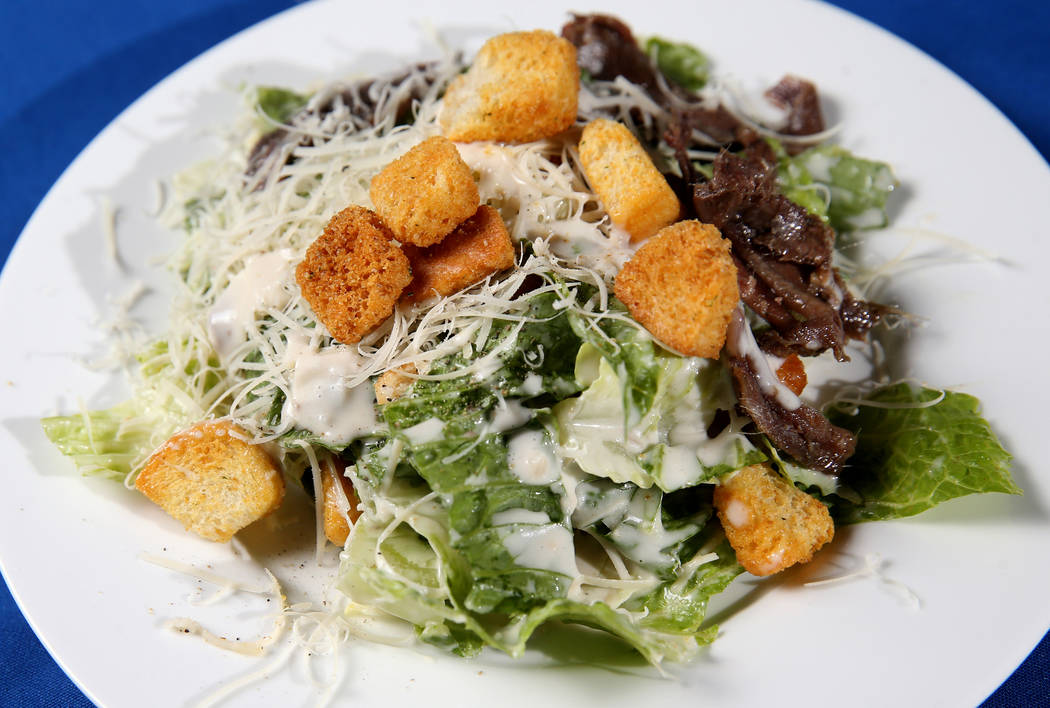 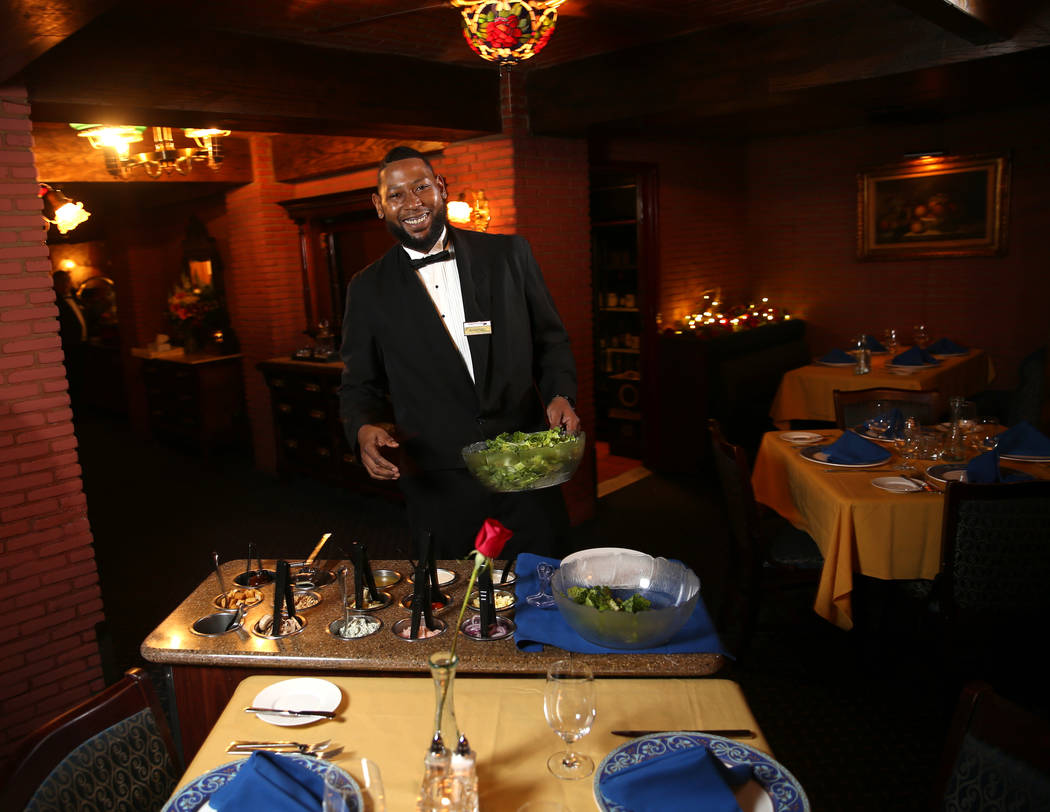 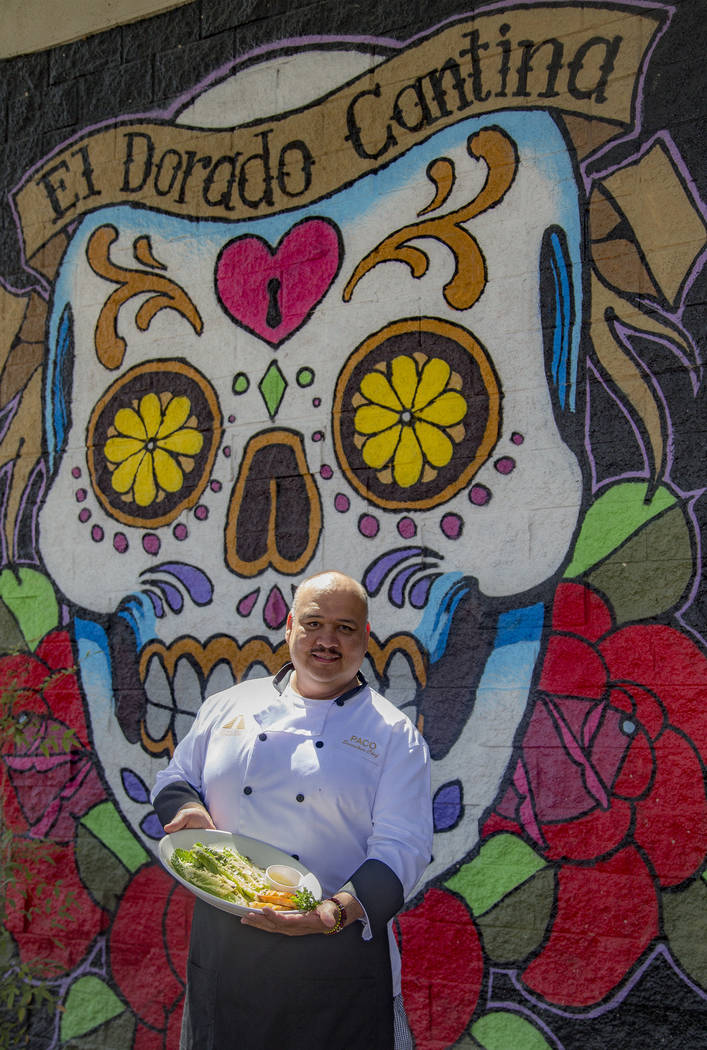 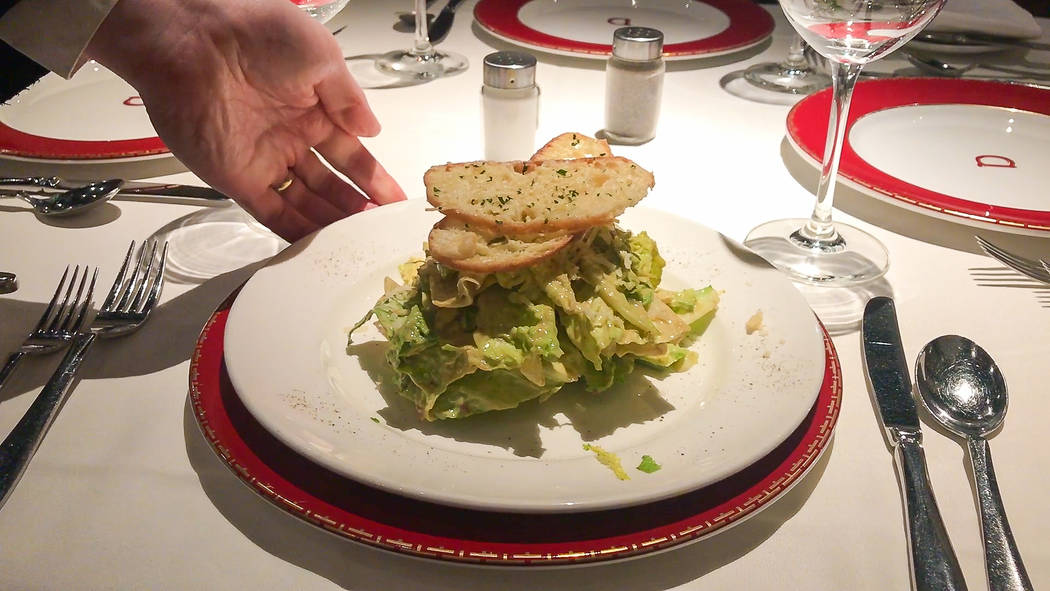 It’s lunchtime on a Thursday at El Dorado Cantina. Ericka Rios wheels a cart to a table and begins to prepare the guests’ first course right before their eyes. But it isn’t one of several styles of guacamole the team prepares tableside. What Rios makes for them is something a bit less predictable, but which has played a tremendous role in the culinary cultures of both Mexico and Las Vegas: a Caesar salad.

Born on the border

For anyone other than a true food historian, however, the biggest shocker was probably the Caesar salad, prepared tableside. If you’re among those confused by seeing the staple salad with an Italian surname in an authentic Mexican restaurant, Cortes wants you to know you’re not alone.

“I have friends who told me that the Caesar salad was from Mexico originally, and I said, ‘No, it’s from Italy,’ ” he recalls. “We went back and forth. Then I found out it’s originally from Tijuana, by a chef back in the day named Caesar.”

It’s been more than 90 years since the dish is believed to have been prepared for the first time in a border town restaurant, and the story of its genesis varies. But Cortes’ version of the salad has some of the most familiar elements.

“He was an Italian guy living in Mexico,” he explains of the dish’s creator, Cesar Cardini. “(And) he was running out of the regular ingredients to make a dressing, like buttermilk and cheese and all that. So he just went to the pantry and grabbed whatever he found. And he was very successful.”

Armed with that story, the Las Vegas chef made a pilgrimage to Caesar’s Hotel in Tijuana, which now houses that Caesar’s restaurant, to try the original.

“I had my mind set on what I was looking for. So I was craving it already, and I was expecting the best.”

What he discovered after two separate visits, however, was room for improvement.

New take on a classic

Cortes is protective of his recipe, which is based on, but not identical to, the one he encountered in Tijuana. It has ingredients common to any great Caesar: egg yolks, olive oil, mustard, garlic. But he adds some dashes of heat and other flavors to make it his own. And he omits what may be the most divisive part of a Caesar: anchovies.

Customers who want more detail on what goes into it, however, only need to order one. Because El Dorado faithfully delivers what many consider the most important aspect of a “real” Caesar salad. Every part of the dish, from the emulsification of the dressing to the tossing of the lettuce, is done tableside.

When presented that way, a Caesar is less a salad than a show, dare we say an experience. And in a town built on showmanship and over-the-top experiences, it has long been an attraction — not always confined to formal restaurants.

Today, Assalone is manager of Hugo’s Cellar at the Four Queens, where the tableside salad cart included with every entrée is nearly as much of a Las Vegas institution at the rose presented to women upon their arrival. Caesar is still a popular choice. But, he says, the experience changed in the late 1990s when the Southern Nevada Health District began to crack down (pun very much intended) on the use of raw eggs.

“Because they didn’t have pasteurized eggs (at the time), that’s when they eliminated making the dressing tableside. So what we have now is a dressing that our chef makes, which is a Caesar salad dressing, but they put a little mayo in instead of the egg, so it makes it a little creamier. They just add it to the lettuce and the ingredients at the table.”

Today, chefs can purchase whole, pasteurized eggs. But Hugo’s still premakes the dressing before building the salad at the table. It’s a faster process that other local restaurants have also adopted, including Fuego Steakhouse at Fiesta Henderson.

For some, however, it’s worth the wait for the old-school preparation.

“It’s exciting for people to see their food being made in front of them,” says chef Ronnie Rainwater of Emeril Lagasse’s Delmonico Steakhouse, where a tableside Caesar has been on the menu “since day one,” and they make it from scratch before every customer’s eyes.

“To me, it kind of takes it back a little bit. (Usually), if you make dressing in a restaurant, you’ve got a blender. You just Brrrrrrrr, emulsify, and you’re all cool. But to do it old school, where it’s just a fork and a spoon and French service — showing you the ingredients and the right amount — you know, it’s entertaining.”