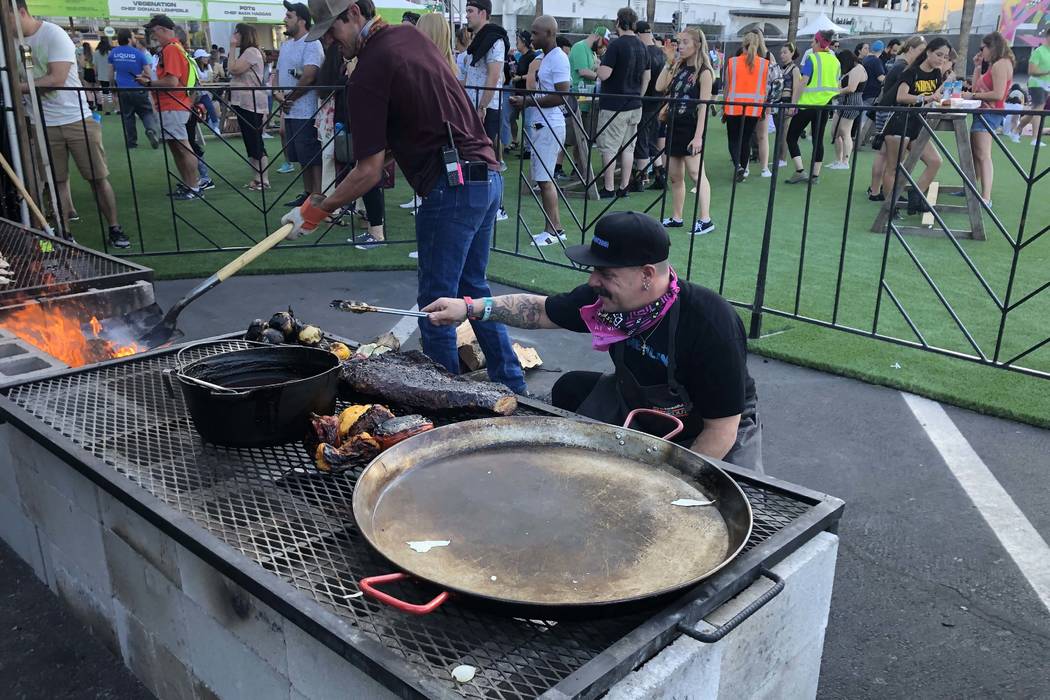 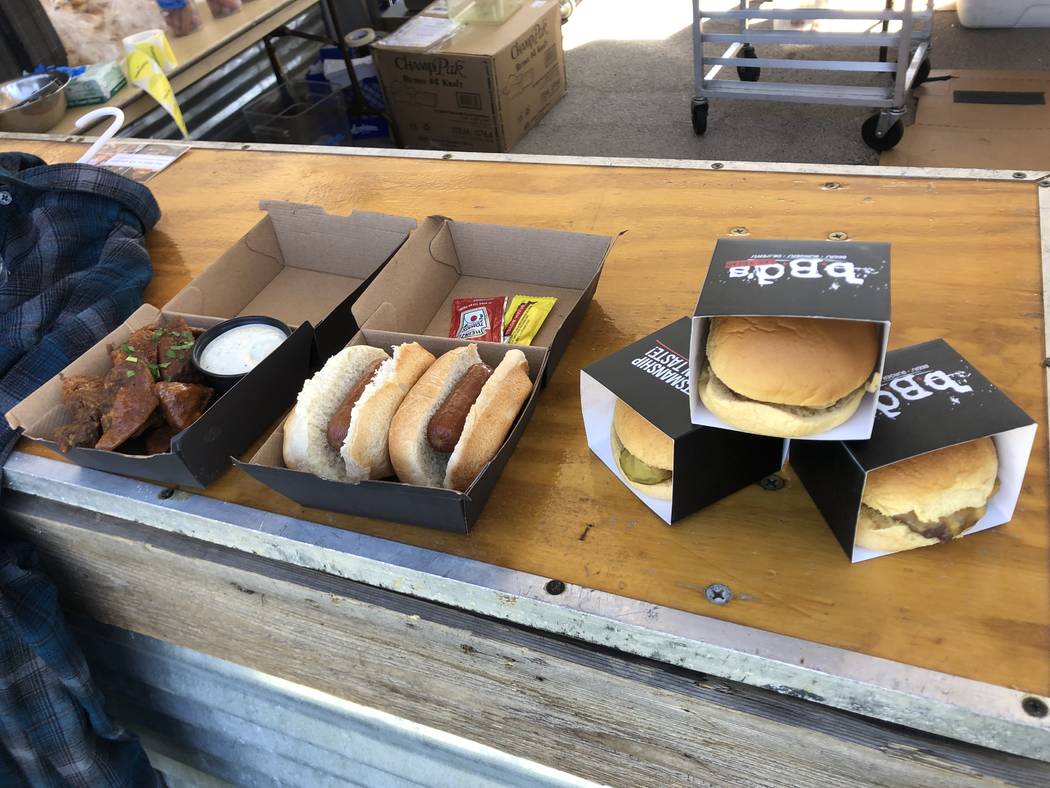 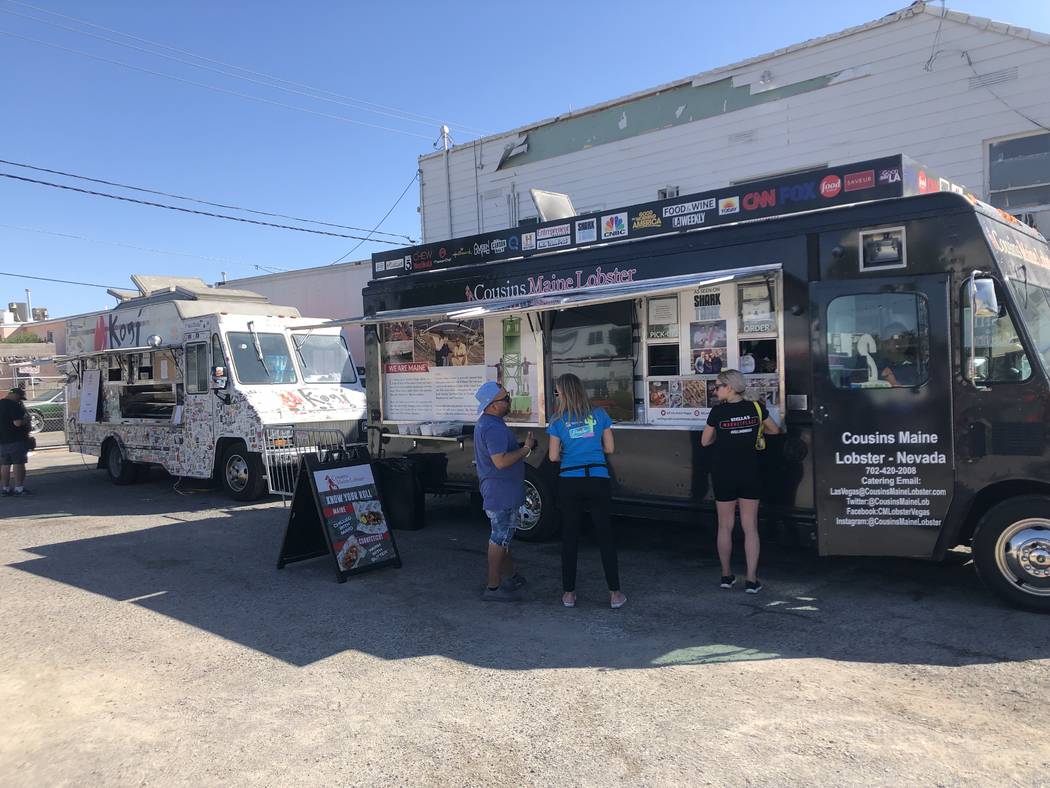 There are food trucks scattered throughout the Life is Beautiful festival. (Al Mancini/Las Vegas Review-Journal) 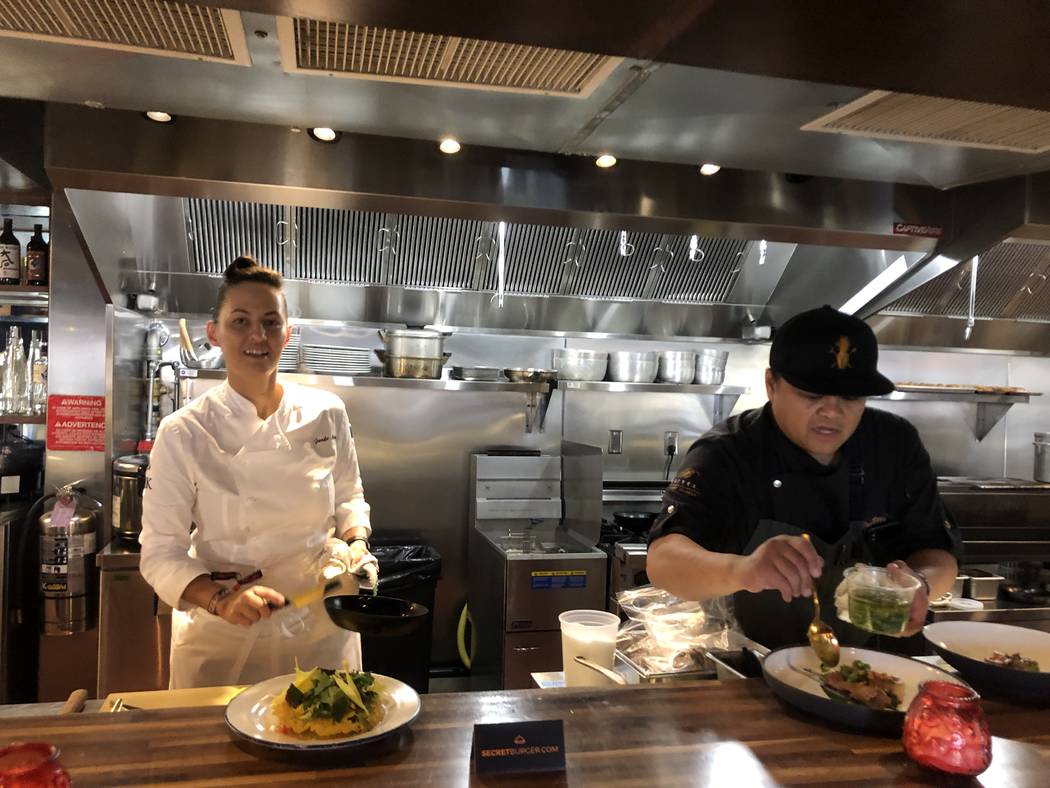 Chefs Jennifer Murphy and Roy Ellamar were featured in the Omakase Cantina on the first night of Life is Beautiful 2019. (Al Mancini/Las Vegas Review-Journal) 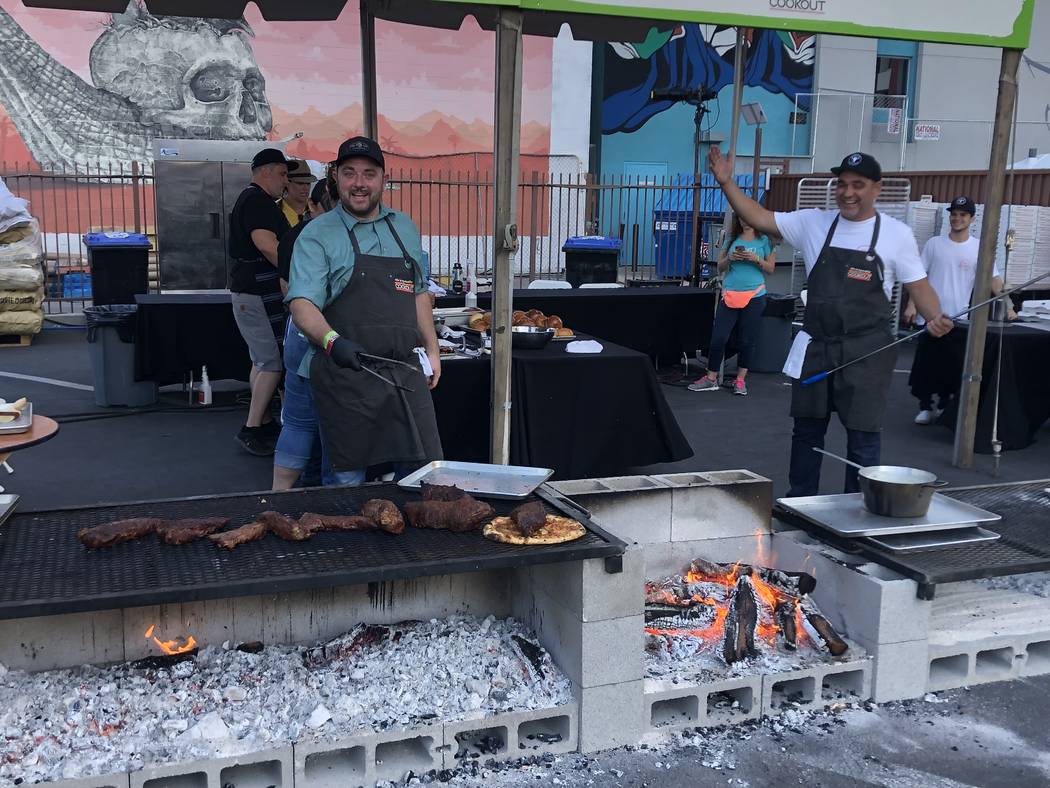 Shortly after 5 p.m. Friday, Vincent Rotolo of downtown Las Vegas’ Good Pie walked one of his pizzas over to a fire tended by chef Justin Kingsley Hall and tossed it onto the grate alongside several tri-tips of beef. Hall didn’t miss a beat. He quickly grabbed one of the massive slabs of meat and jokingly placed it atop the pie, creating what might be seen as the ultimate meat lover’s pizza.

A few yards away, Border Grill and BBQ Mexicana chef Mike Minor tended his own fire in the shadow of El Cortez, putting the final touches some burnt end burritos. As a few dozen guests stood in line to sample their cuisine, or the chicken and pork being prepared by the team from Jose Andres’ China Poblano, others lounged peacefully in the grass or amused themselves on a pair of seesaws. Just across Sixth Street, a set change was underway Life is Beautiful’s Huntridge Stage.

“Open fire cooking (is) definitely something different for the crowd.”” Hall noted of the area, notated on the festival map as The Cookout. “The best part about this is that anybody can come. This is no longer just a VIP experience. We open up at 5, and each chef is just doing 300 portions. So when we sell out, we sell out.”

A few yards to the south, on the same shaded lawn, Diana Edelman was overseeing the Farm Stand, a fairly traditional group of vendor stalls most notable for the fact they will be serving only vegan cuisine for the entirety of the festival. They range from predictable mainstays such as downtown hotspot Vegenation to more niche finds such as the west-side Egyptian vegetarian gem Pots. There are even a few surprises, like Aria’s trendy Catch, which is known for its seafood but came to the festival to show off its vegan chops.

These are just two of the most distinctive dining options available to general admission ticket holders at this year’s festival. But they’re hardly the only representations of Las Vegas’ exploding culinary scene.

The culinary villages dotted throughout the festival grounds feature dozens of stands representing top local restaurants and neighborhood favorites. The fleet of food trucks scattered between those villages, various open lots and the streets within the festival footprint are just as diverse, representing nationally-recognized brands such as Roy Choi’s Kogi truck and Vegas-born concepts like the Chinatown tapas spot EDO.

Many of the existing restaurants within the festival footprint have created special Life is Beautiful menus. On the patio of The Kitchen at Atomic, just across Fremont Street from the stage Monsta X and Slushii will headline on Saturday and Sunday, a team grills up hamburgers and veggie burgers, while wraps are available inside the dining room. The Indian restaurant Turmeric, across Fremont from Downtown Container Park, has installed a gourmet ice cream window.

Within the Fergusons Downtown complex, the brand-new outpost of Mothership Coffee Roasters is offering sandwiches and “gruyere twists,” while chef Dan Krohmer is offering chicken empanadas and street tacos on the patio of his Mexican spot La Monja. In the meantime, Krohmer’s other Fergusons outpost, Hatsumi, has been transformed into a reservations-only experience called the Omakase Cantina that will host a different pair of local chefs creating multicourse formal dinners on each night of the festival.

“Tonight we have Roy Ellamar and Jen Murhpy,” organizer Jolene Mannina explained of the Friday lineup, as the head chef of Bellagio’s Harvest and the former head chef of Gordon Ramsay Hell’s Kitchen finished their preparations.

Those are just a few of dining options available to general admission ticket holders. Plenty of other bites are being offered to guests who spent a bit more for a premium experience. So, however you plan to enjoy days two and three of Life is Beautiful, there will be no excuse to leave hungry.