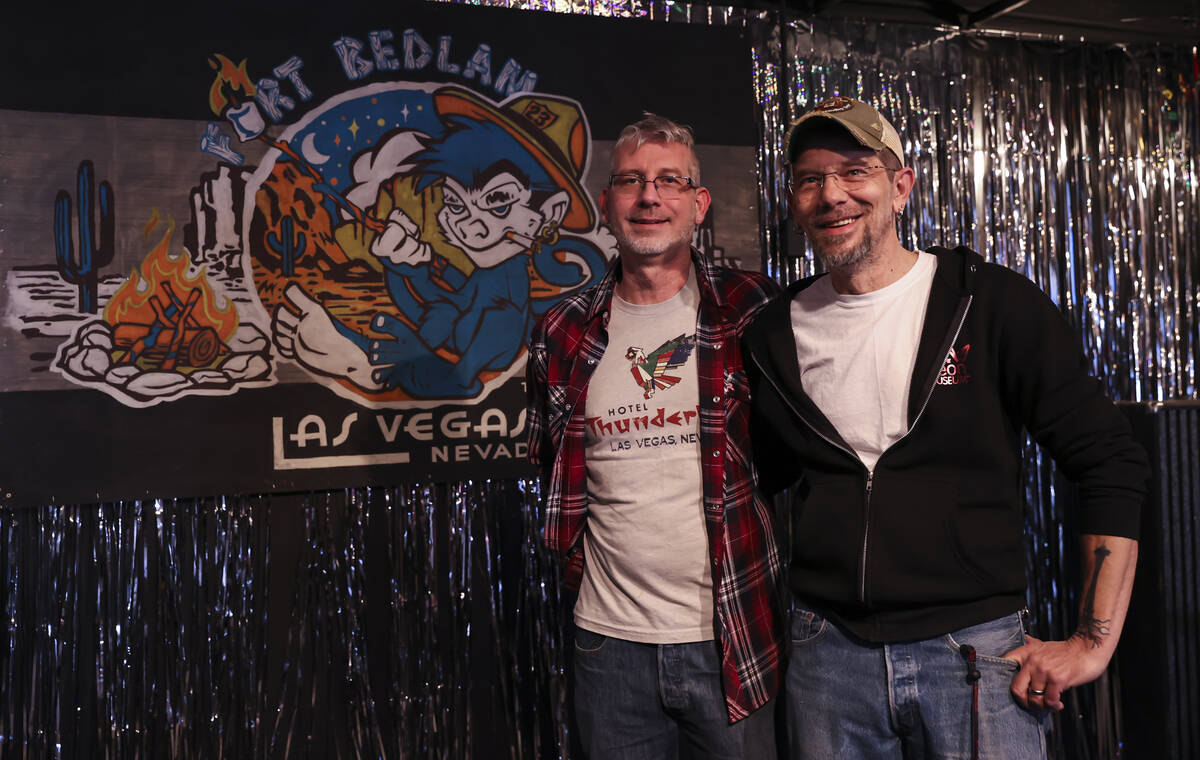 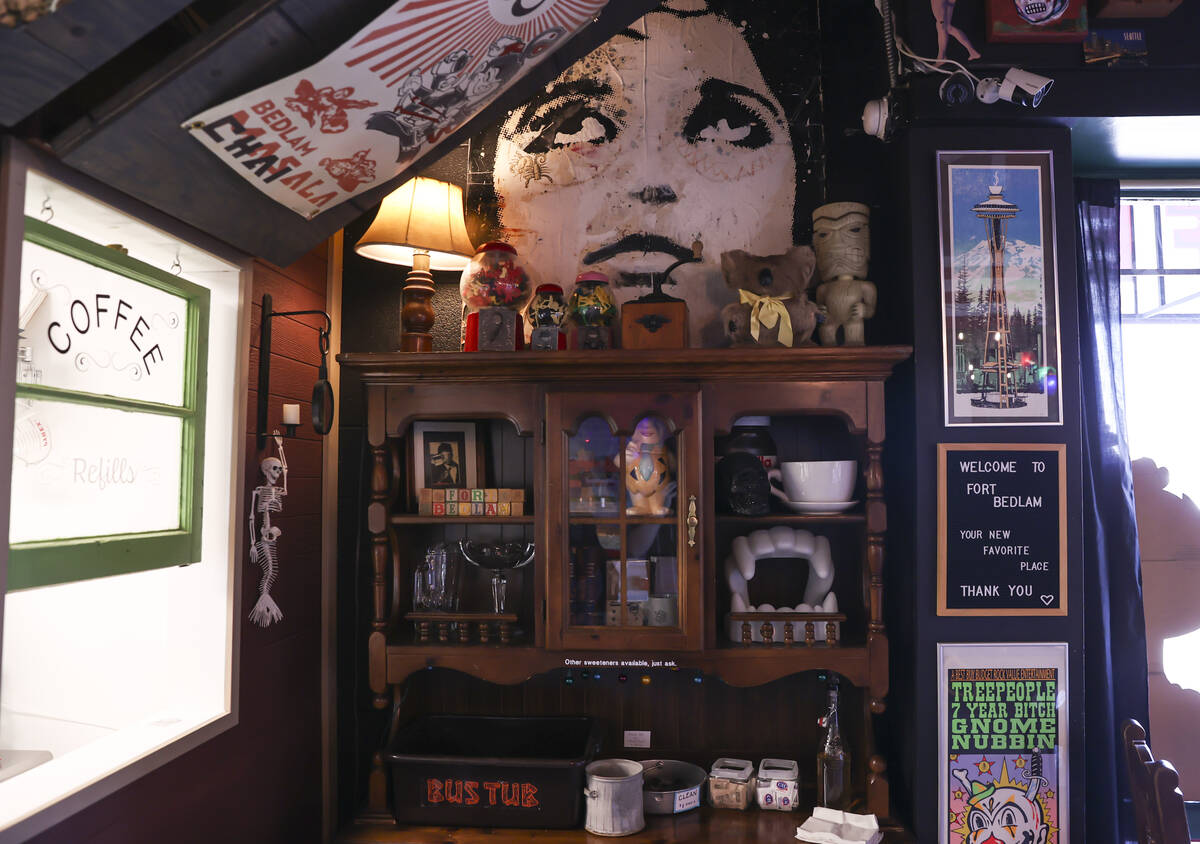 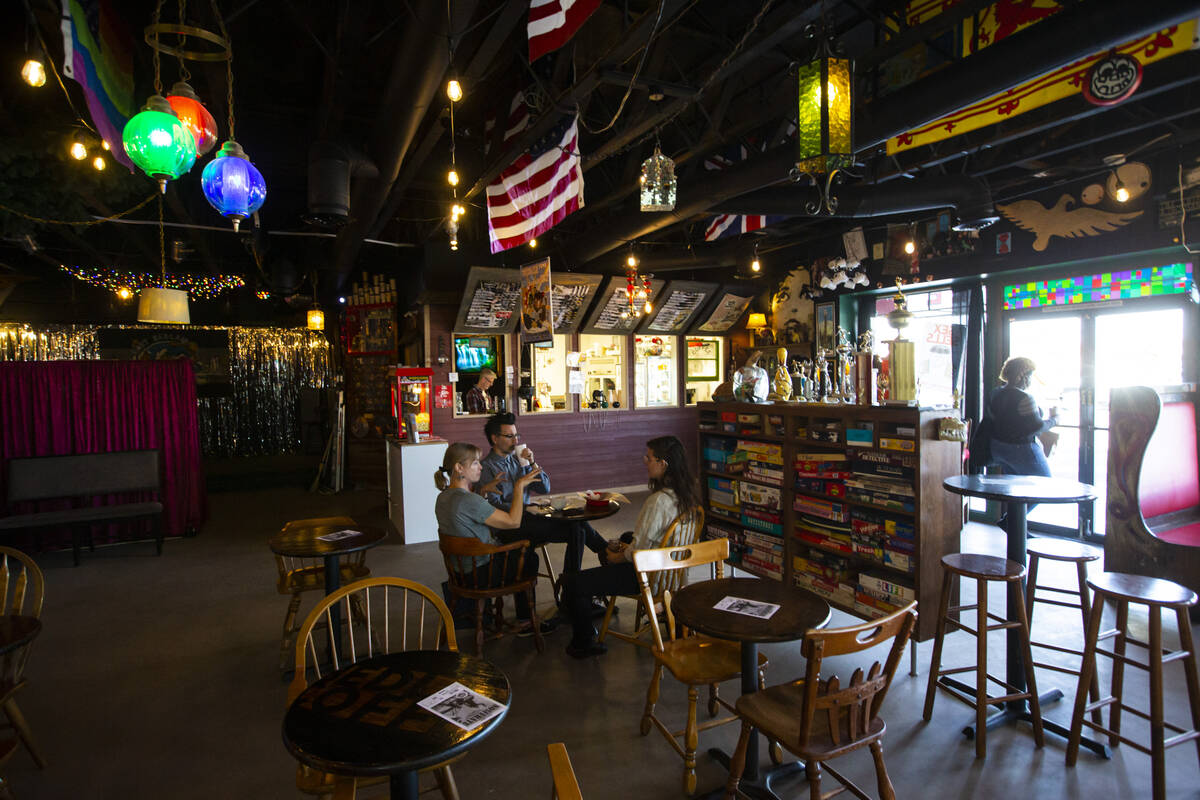 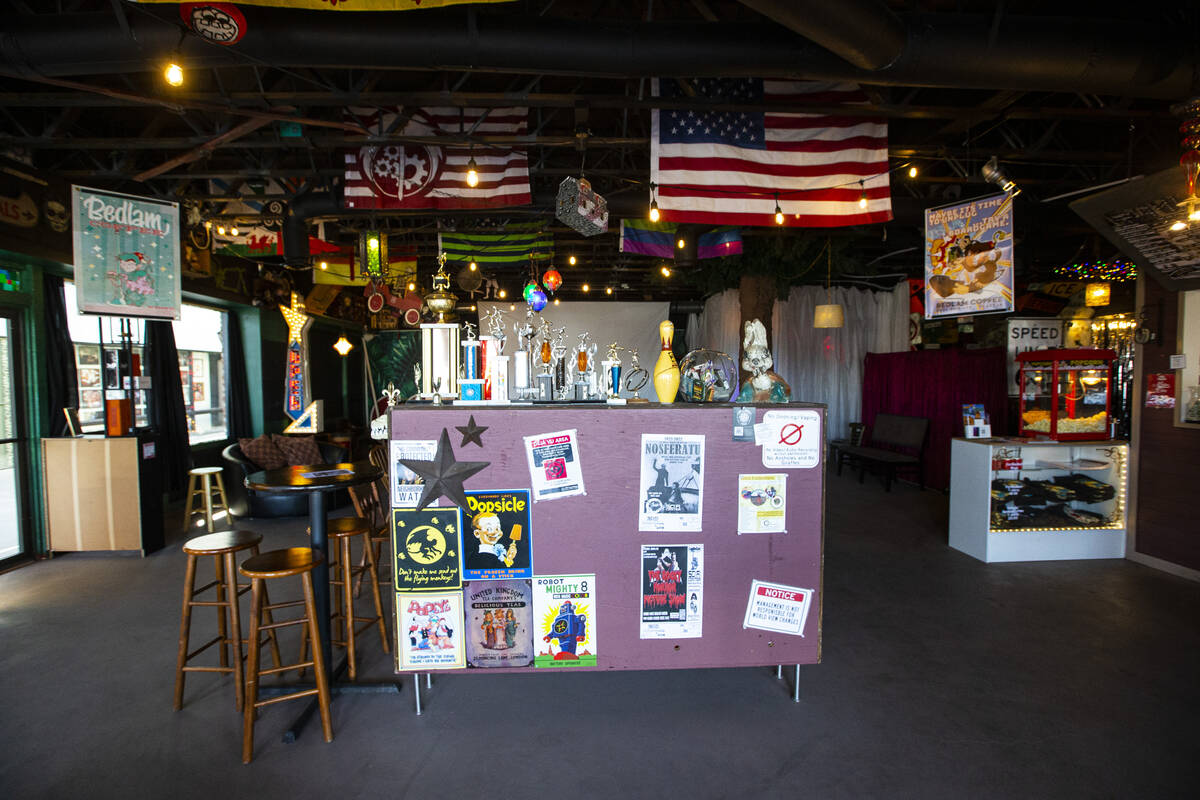 A colorful slice of Seattle has found a permanent new home in Las Vegas. Fort Bedlam, 900 Karen Ave., is a coffeehouse filled with eclectic decor from floor to ceiling. Since October, the funky, welcoming space has served up lattes, mochas, teas and more in Commercial Center, one of Las Vegas’ original retail spaces just south of Downtown and the Arts District.

Owned by Ben Borgman and Chris Connors, Fort Bedlam had its origins in the raucous, bar-filled Belltown neighborhood of downtown Seattle, where they had operated Bedlam Coffee since 2009. The couple had visited Las Vegas numerous times and had hoped to open Fort Bedlam as a seasonal outpost.

“We used to vacation here,” Borgman said. “Our plan was to do summers in Seattle, then winter down here.”

But strict closure protocols in Washington State forced the entrepreneurs to shutter their Belltown operation in 2020. Compelled to reassess their plans, they loaded a nearly museum-level volume of furnishings, art, memorabilia, board games, tchotchkes and beyond onto a 28-foot moving truck. They were off to Vegas for good — in the middle of the summer, no less.

Perhaps familiar to many who have moved here in the hot season, their moving company dropped a metaphorical bomb on the two when it parked the trailer at the Commercial Center: “They delivered it right here in 117-degree heat and said we have three days to empty it,” he said.

Luckily, they got a bit of a helping hand from a new neighbor, William Powell, owner of the Sci-Fi Center, also located at Commercial Center. It was a slog, all the same. Eventually, after nine months of permitting hoops, everything was approved; they could welcome customers.

‘Everyone else is doing it wrong’

Fort Bedlam’s roster of beverages is astounding. It’s displayed above the order window in an edgy, punk rock collage-style befitting a place with roots in the city of the Fastbacks, Mudhoney, Nirvana and Sub Pop Records. There’s also a retro-cute paper menu with camping-themed cartoon imagery from the late ’50s/early ’60s; it also includes a humorous explanatory guide to ordering drinks.

Not counting customizations, the menu lists nearly 50 sippable selections. Of course, there are basics like Americanos, cappuccinos, drip coffee, masala chai and iced tea, but choices quickly trend to the outrageous.

There’s a cinnamon-redolent French Toast latte; the Cherry Bomb, a blend of dark chocolate and the namesake fruit; the Monkey Spice, a cacao-orange-cinnamon concoction and a Nutella-infused mocha.

As for chilled refreshers, Italian sodas are on the list, plus a trio of intriguing lemonades infused with Red Hots, lavender and roses, respectively.

Borgman and Connors are especially proud of their cold-brewed coffee, which they craft in-house in warm months.

“As soon as summer comes and the heat picks up, we do an amazing cold brew. I’m sure if there was a competition I’d enter it. People would be like ‘Ok, we’re done.’ Everybody else is doing it wrong,” Borgman said.

As for food, they keep the selection slim, mostly pastries like cinnamon rolls and cheese danishes from Great Buns Bakery. This summer, they hope to offer fresh, housemade cold-brew popsicles and pistachio ice cream, as well.

What’s with the large pop-up screen in the main coffee room? “The Sci Fi Center is showing movies here,” Borgman said. Last week it was “Nosferatu,” the famous 100-year-old vampire film. Saturday it will be “The Rocky Horror Show.” (Check fortbedlam.com for updates.)

Borgman and Connors hope to expand and diversify Fort Bedlam’s entertainment and cultural offerings, but they don’t see themselves as curators. ”Lots of people are like, ‘Oh, what do you show?’ What we’re doing is, here’s our facilities — we have a stage, we have a screen, we have a pretty big space. What do you want to do? You’re the community. We’re just the house,” said Borgman.

“You guys decide what you’re going to do with this coffeehouse. This is your coffeehouse,” he said, noting that they are open to proposals from all kinds of performers and are interested in events from dance to comedy and beyond.

“Choose your own adventure,” added Connors.

In keeping, there’s even an ongoing series of life portrait classes that run in a side room, complete with nude models. When in session, drapery conceals the classes for modesty’s sake, even in Sin City.

Finally, beyond delicious drinks and fun events, Fort Bedlam’s abundant decorations are a draw unto themselves. They’re random, for the most part, but all have a playful edge, from classic board games like Clue, Mousetrap and Life to a cardboard Sasquatch cutout in the front window and a portrait of Edie Sedgwick emblazoned with cartoon scorpions. For additional ambiance, Emerald City’s KEXP radio station is constantly streamed for an eclectic soundtrack.

And there’s even a bit of a decor mystery. In the main room, there’s a dramatic wood and red-leather booth. It used to be installed in Seattle’s OK Hotel, a venue seen in the film “Singles.” The seating ensemble is supposedly marked somewhere with Kurt Cobain’s initials, but nobody — Borgman and Connors included — can verify if any of the marks on the seating are his. So lace up your Doc Marten boots, order a London Fog (a latte made with tea) and get searching.