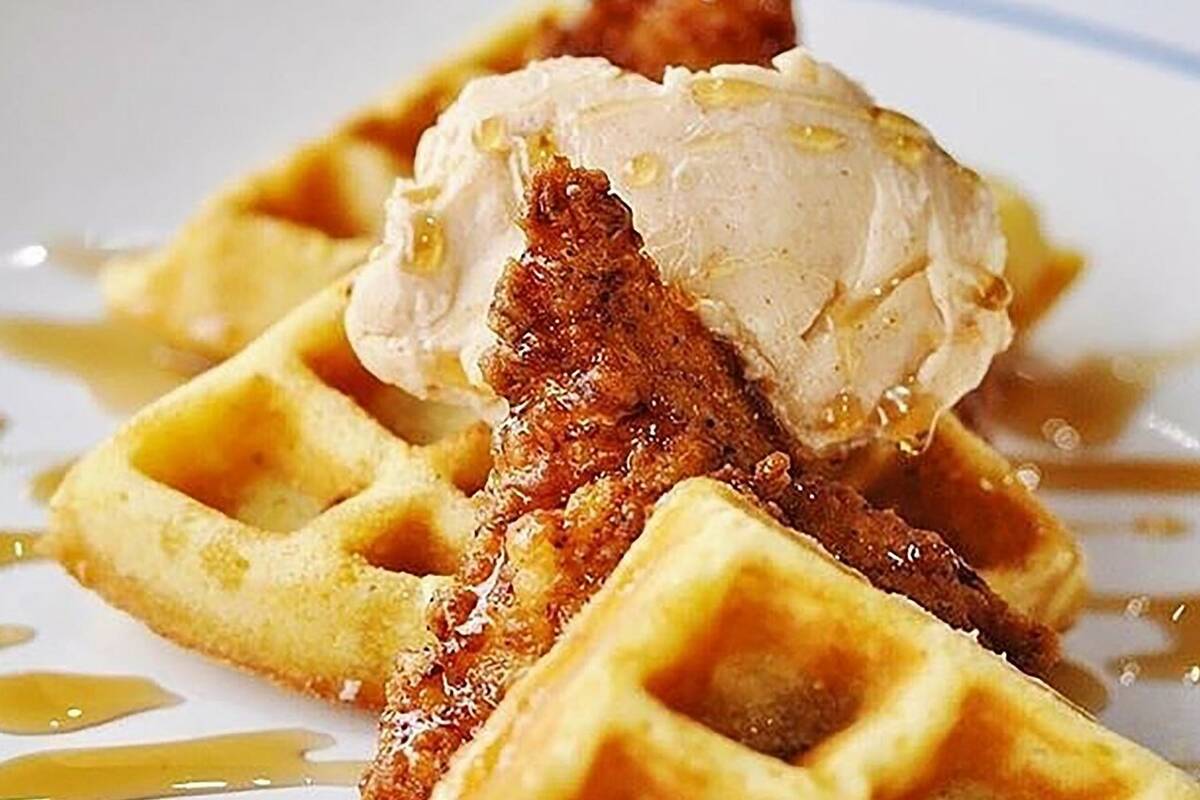 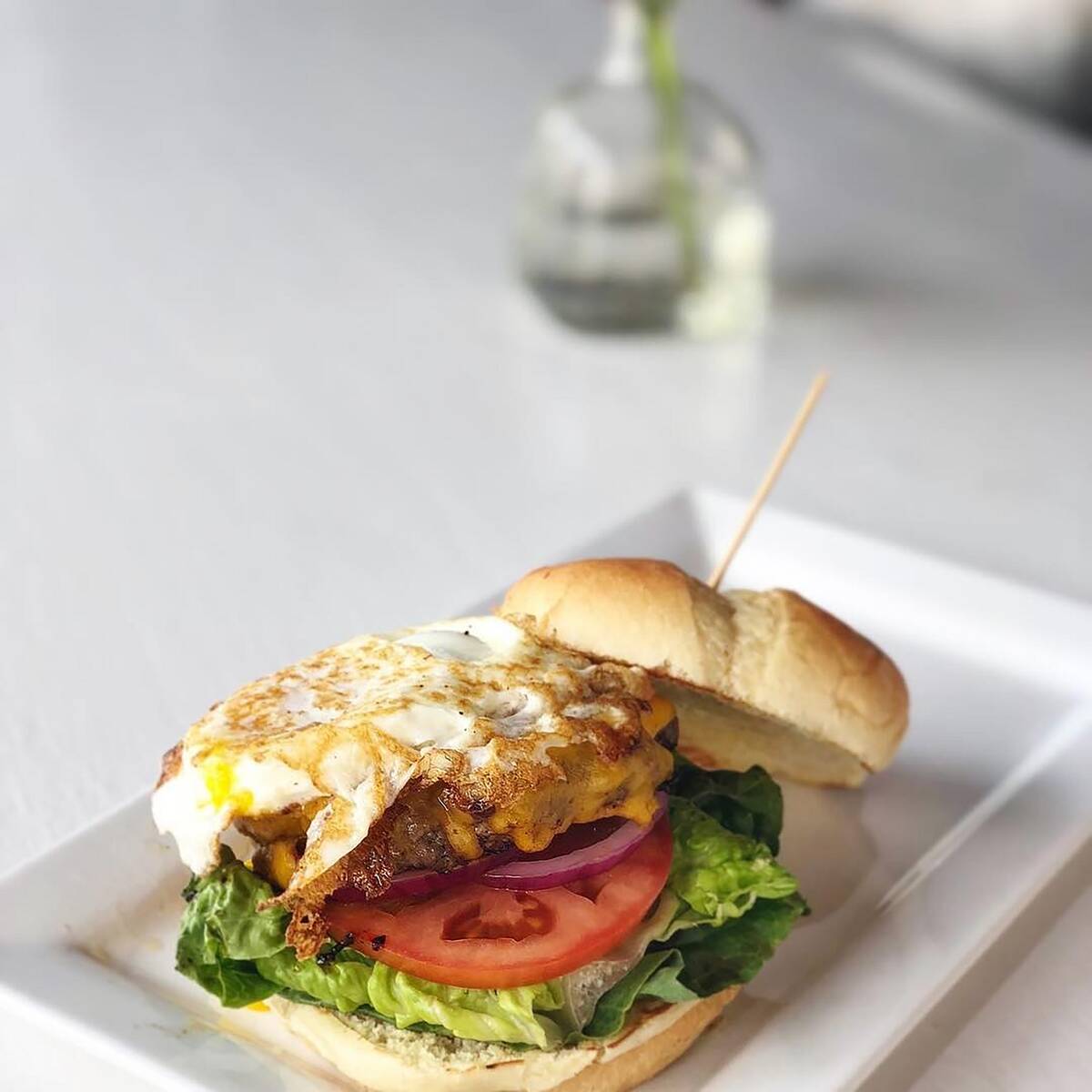 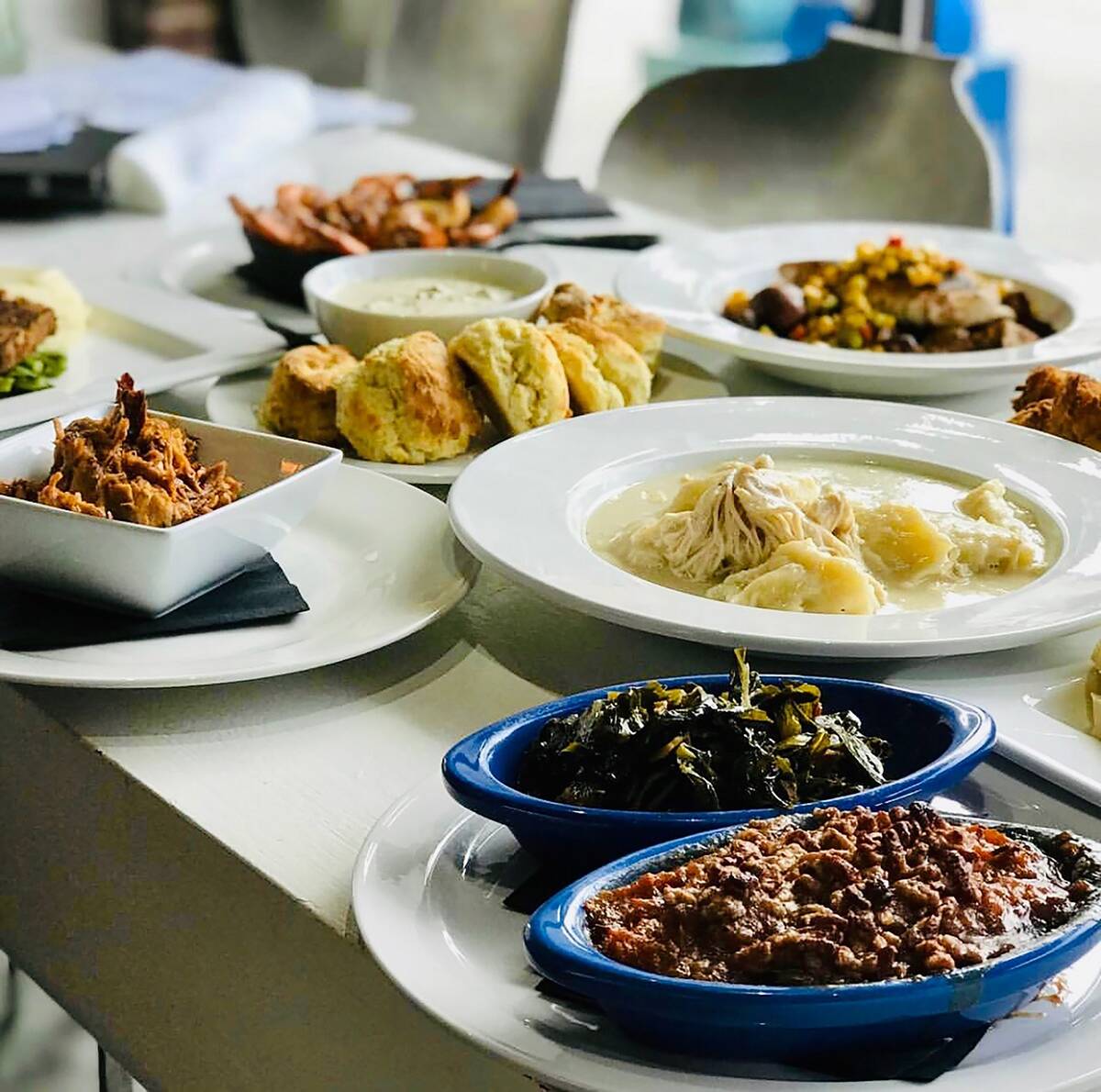 An array of dishes from Nellie's. (Nellie's Southern Kitchen) 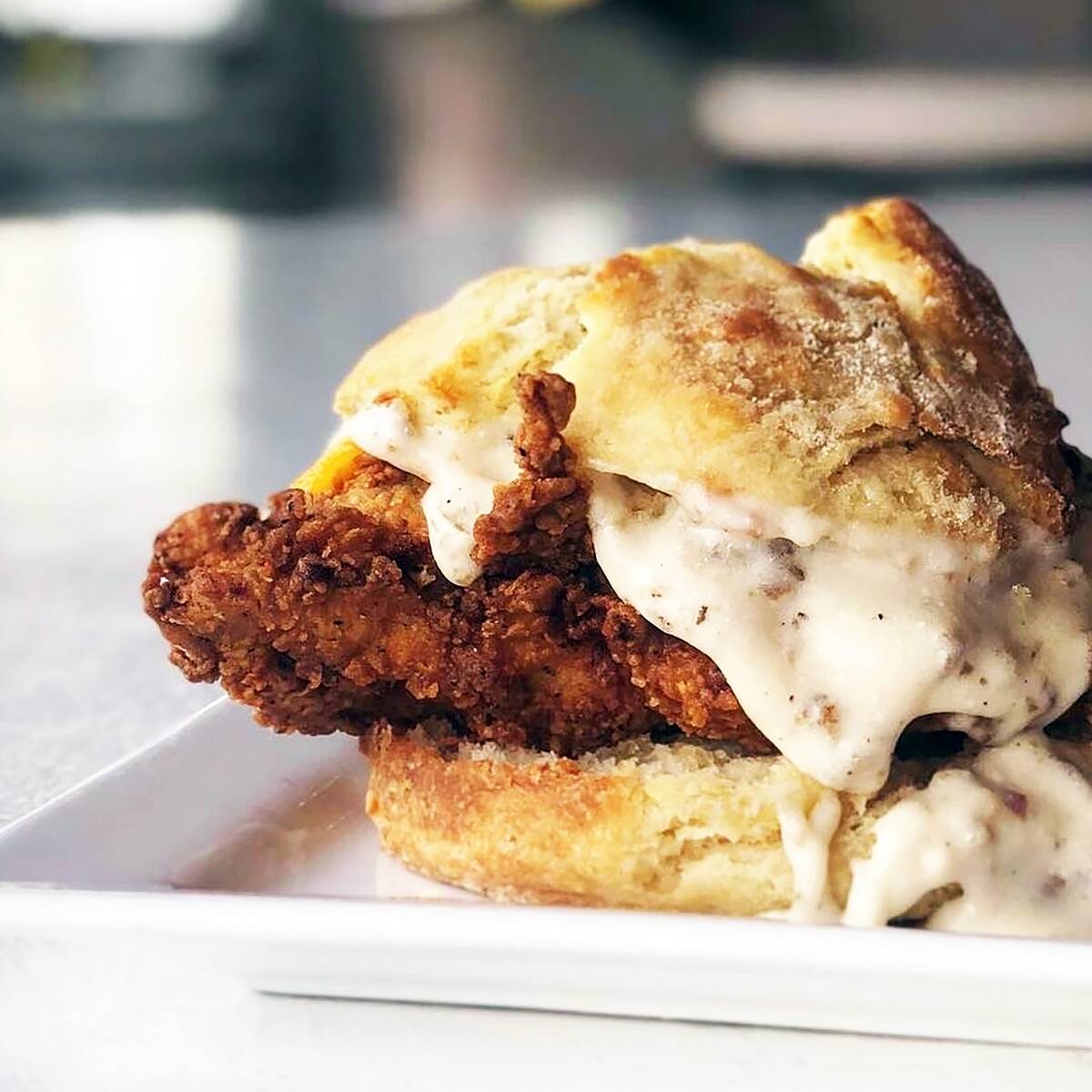 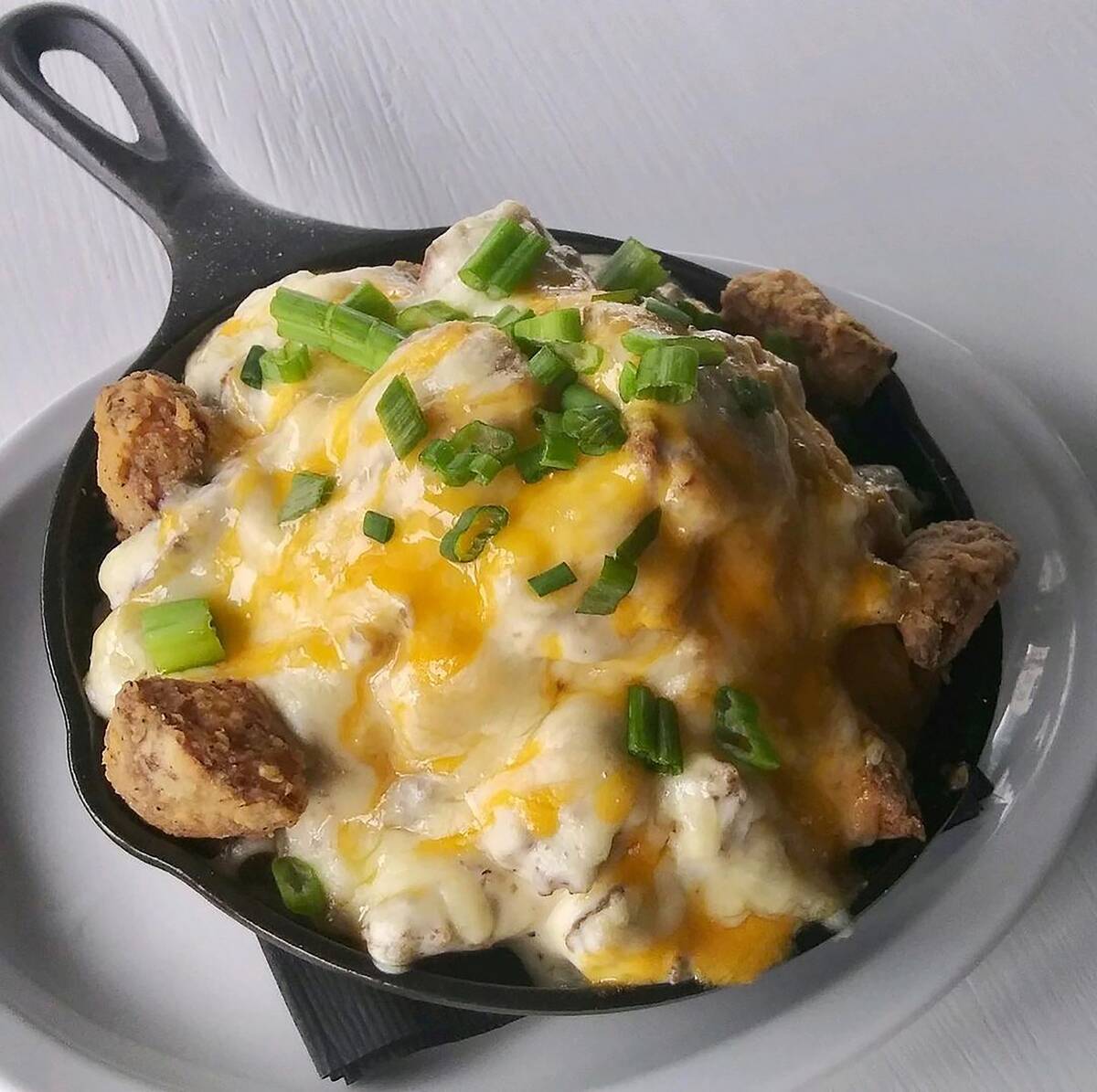 Funny thing about families: They grow, the members evolving and changing, but some things remain constant. For the Jonas family, two constants are music and food.

You may have heard about the family in the context of the first, the three superstar Jonas Brothers having made quite a name for themselves in the past decade and a half. But follow the other thread back a few generations and you’ll find a family that loved making music with each other around the dinner table, enjoying some Southern comfort food while they were at it.

It’ll all come together early next year, when Nellie’s Southern Kitchen — the family’s second — opens at MGM Grand.

In an interview last week, Kevin Jonas Sr., father of the famous brothers, said Nellie was his grandmother, the matriarch of the family clustered in Belmont, N.C., west of Charlotte. Jonas said Nellie worked hard in one of the region’s 24 cotton mills, starting when she was 14. And her work didn’t end with the factory whistle.

“She came home, linted herself off (removing the cotton that clung from the mill) and did Southern cooking,” he said in his soft Carolina lilt. “No matter where I went in the world, her chicken and dumplings — that was home.”

In 2016, the family opened the restaurant in Belmont that would honor and celebrate Nellie and her food, and the tradition will continue with the Las Vegas offshoot.

“It’s Southern comfort food, a little bit elevated, but we’re trying to keep it where everybody can be comfortable, like when they came to see my grandmother,” Jonas said. The chicken and dumplings, made with biscuit-evoking dumplings and pulled chicken in a creamy sauce, will be a signature.

“It’s hearty,” Jonas said. “It’s an incredible value that you get.”

The menu lists a lot of chicken, he said, including fried chicken and “amazing” chicken sandwiches.

There’s pulled pork, too, with the vinegar-based barbecue sauce that’s a North Carolina tradition, the sandwich dubbed Hawg Hill for a spot that’s part of the family’s origin story.

Plus fried okra and chicken-fried steak. Pecan-crusted fried green tomatoes (or without pecans, for those with allergies). Biscuits, which Jonas said are “the bull’s-eye of a Southern restaurant.” Mac and cheese.

Some recipes came from other family members. Sweet Potatoes Caroline, which have a pecan glaze, is one of his wife’s recipes.

“It’s almost a dessert,” Jonas said. “For our kids, it was a staple.” Actual desserts such as peach cobbler, banana pudding and hand pies will be on the menu.

So will an iconic Southern creation. “I’m real proud of our pimento cheese,” he said.

Jonas said there also are healthy and gluten-free options for those who need them, and the older recipes have been tweaked to conform to modern tastes. The food’s made from scratch, he said, with some seasonal and sourced locally when possible.

“These 100-year-old recipes are among the most popular at our restaurant,” he said, adding that he’s heard comments from people who said eating there was like getting a hug from their Southern grandmother. Jonas said the original Nellie’s has become a destination restaurant for the region, with some of those who come for the food wondering why there’s a “shrine” to the Jonas Brothers in it.

But some, he said, travel from around the world specifically for the Jonas Brothers connection — one reason he’s particularly excited about having a restaurant in Las Vegas, with its surfeit of international visitors. And yes, the brothers’ music will be among that played in the restaurant.

He knows Nellie would be proud, both of the restaurants and of her great-grandsons. While Nellie didn’t know the boys as “the Jonas Brothers,” he said her husband — his grandfather — wore a Jonas Brothers T-shirt when he was in the hospital near the end of his life and, because he’d once had a band with two brothers, liked to say they were “the original Jonas brothers.”

Jonas said when the boys were singing around the dinner table and he was taking them out to launch their career, he knew they had potential.

“But I never dreamed it’d go to the place it’s gone,” he said. “I like to say, ‘They traveled in my van, before I traveled on their bus, or their plane.’ “