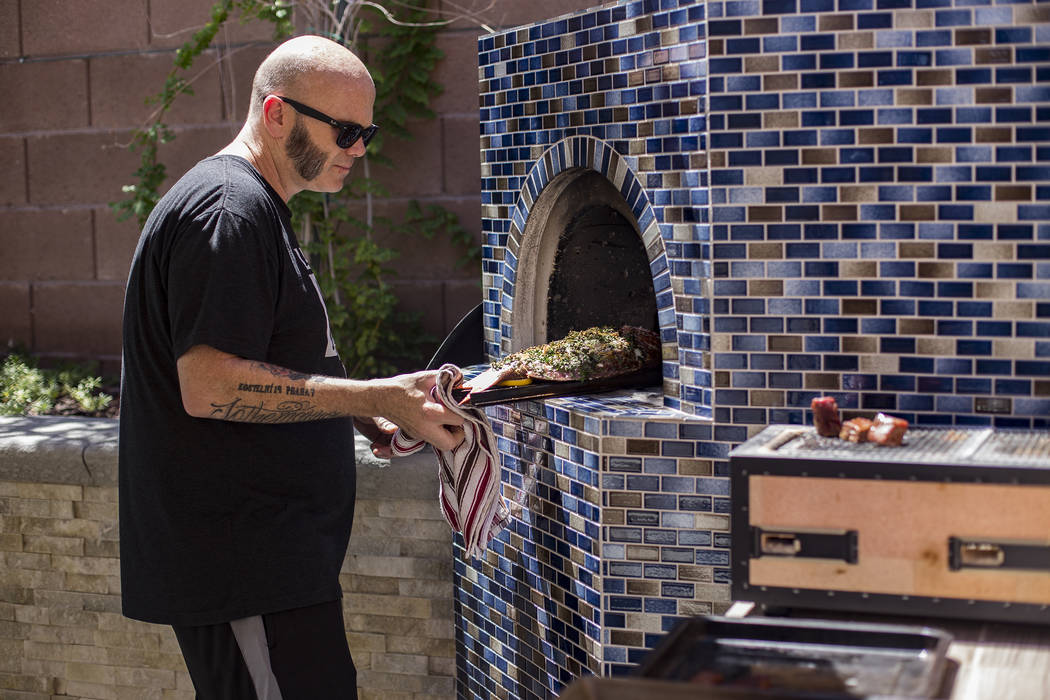 John Courtney, chef of Block 16 at The Cosmopolitan of Las Vegas hotel-casino, pulls out a red snapper from his pizza oven in his backyard in Las Vegas, Monday, Aug. 12, 2019. (Rachel Aston/Las Vegas Review-Journal) @rookie__rae

Congratulations and bon voyage to local F&B veterans John and Paige Courtney, who will be leaving Las Vegas and heading to Park City, Utah. John, who most recently opened Block 16 Urban Food Hall at The Cosmopolitan of Las Vegas as its executive chef, has accepted a position as food and beverage director at the Park City Westgate. His wife, Paige, who is currently a manager at Aureole, will be assistant food and beverage director at the Waldorf Astoria. John will say his official farewells at the Sept. 14 Back of the House Brawl, where he’ll be serving as a judge.

Speaking of the Back of the House Brawl, the late-night food truck cooking competition will be leaving the Strip when it returns from summer hiatus. The parking lot of The Sand Dollar Lounge, 3355 Spring Mountain Road, will be the site of the Sept. 14 and Oct. 19 battles as well as the Nov. 17 season championship. The September festivities will start with a midnight Cock Fight cocktail competition between J.R. Ramirez of The Black Sheep, NoMad’s Adam O’Donnell and Daniel Keaveney of Esther’s Kitchen. Then at 1 a.m., Brian Howard of Sparrow + Wolf and Nicola Costagliola of Restaurant Guy Savoy will join forces to take on Aria Cafe’s Sean Farney and Kaiseki Yuzu’s Kaoru Azeuchi on the trucks.

Other Mama chef Dan Krohmer’s new downtown Mexican spot, La Monja, will open for business Wednesday. La Monja, which is Spanish for “the nun,” is at Fergusons Downtown on Fremont Street, just across the converted motel complex’s courtyard from his Asian restaurant Hatsumi. Krohmer celebrated the new restaurant’s launch with a two-night private party over the holiday weekend.

Ambra Italian Kitchen + Bar has opened at the MGM Grand with a menu of shareable starters such as a seafood tower, handcrafted pastas such as lobster spaghetti and entrees such as 45-day dry-aged tomahawk rib-eye carved tableside and wood-fired whole grilled branzino.

Ivo Angelov has been named general manager of Costa di Mare at Wynn Las Vegas, after 11 years at Le Cirque at Bellagio.

Go ahead, bring the kids

Henderson parents craving some Naked City pizza action no longer need to resort to takeout or finding a sitter. The chain’s location at 10940 S. Eastern Ave., inside PT’s Tavern, is now family-friendly.