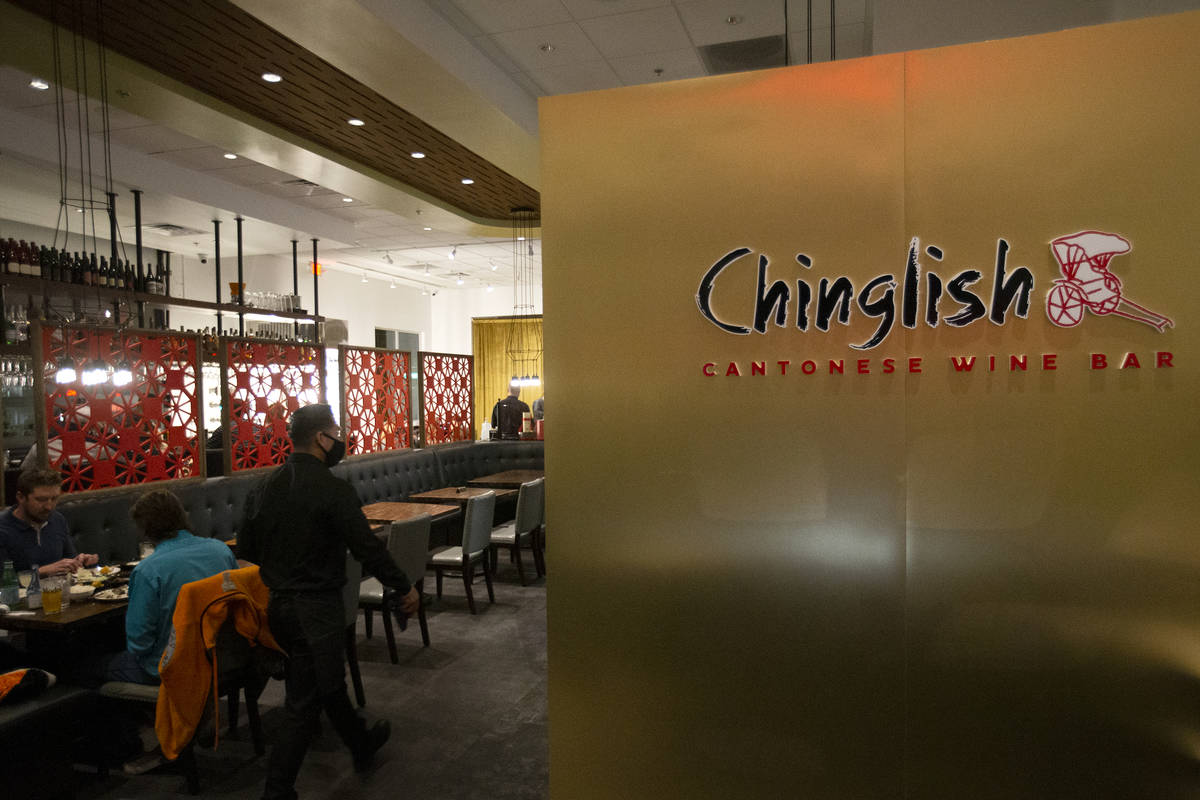 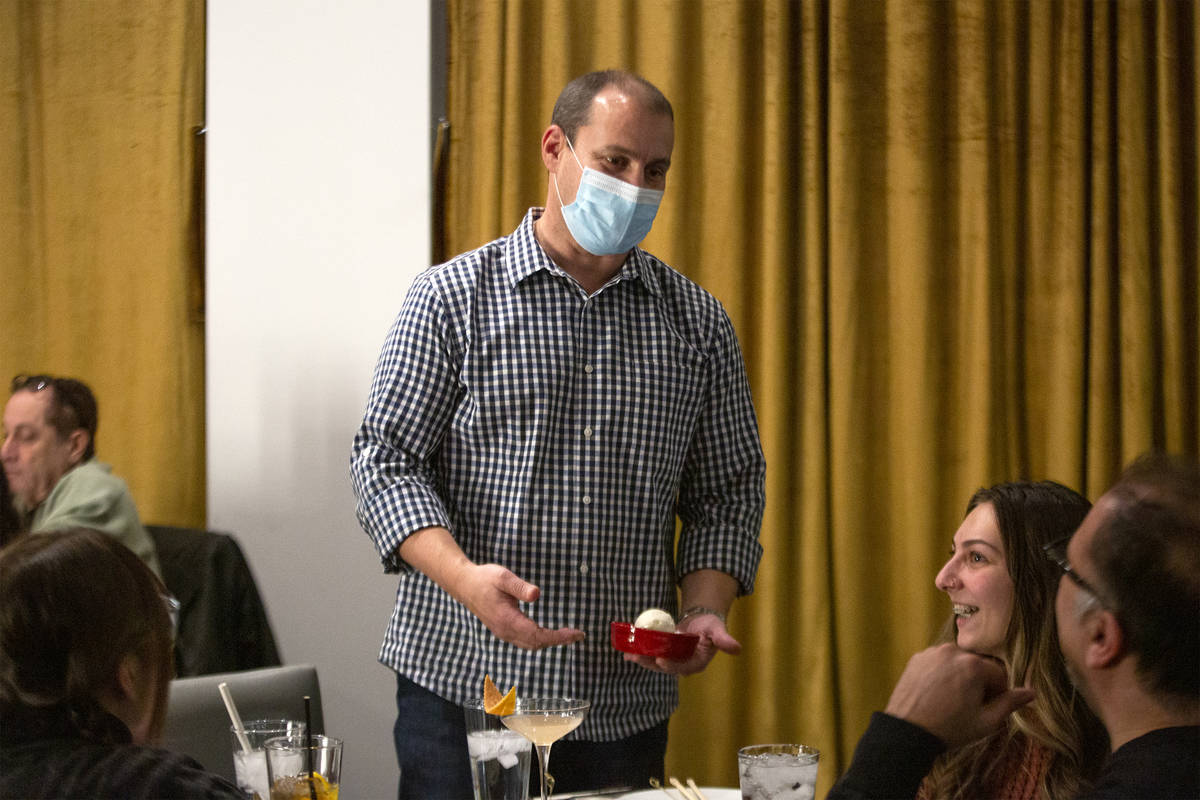 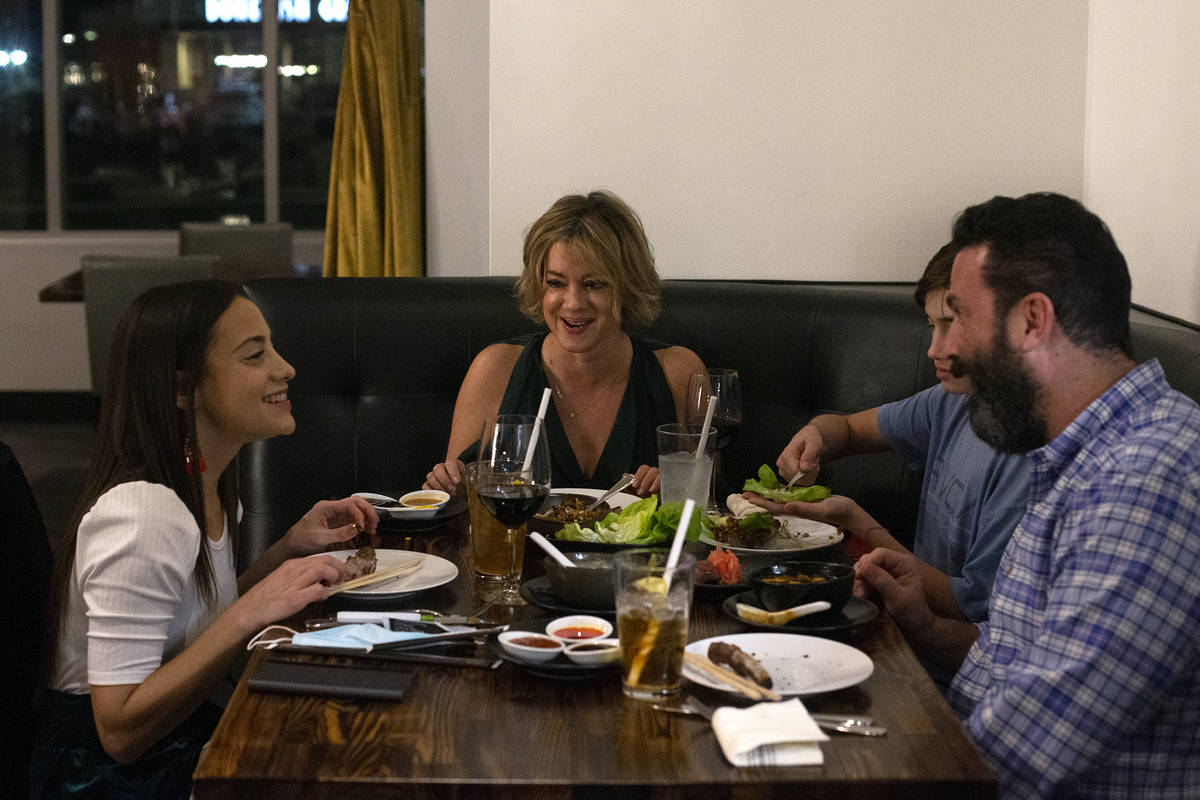 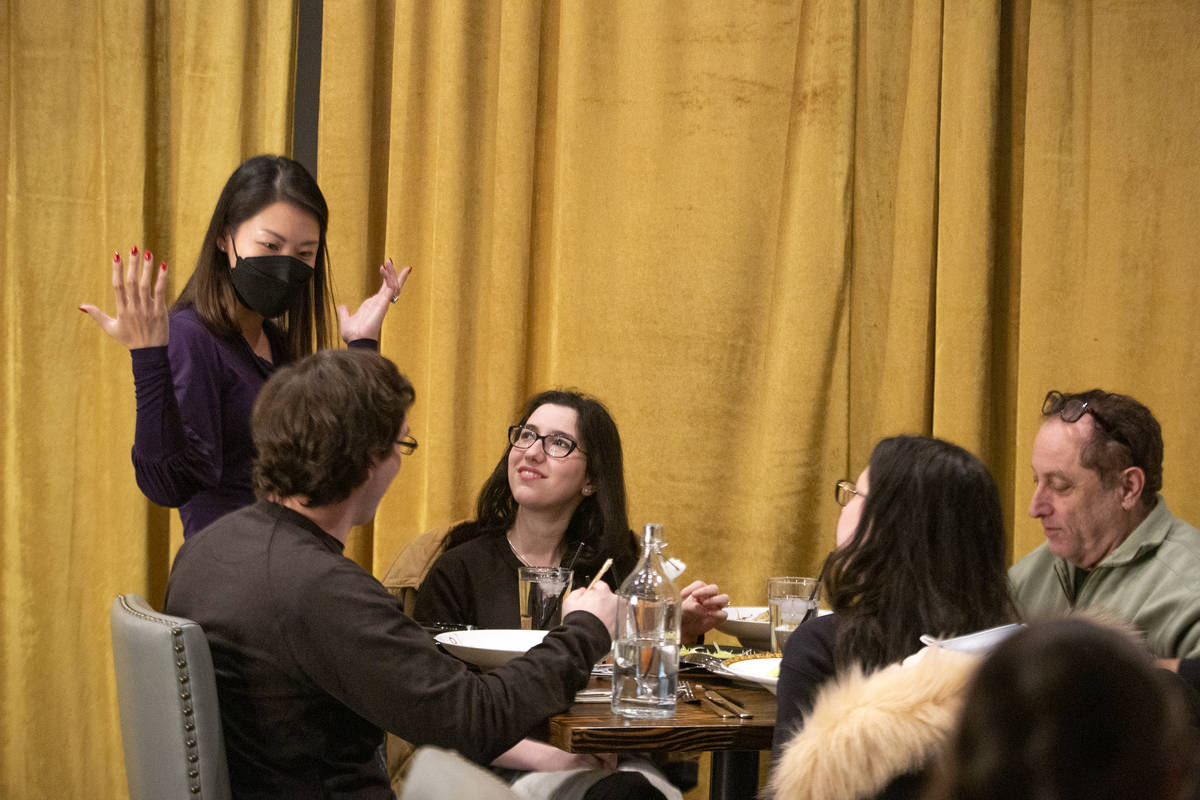 Brianna Winner, center, and her family chat with Chinglish Cantonese Wine Bar co-owner Kitty Heck on Thursday, Dec. 24, 2020, in Las Vegas. The family is Jewish and came to enjoy a kosher meal on the Christmas Eve holiday when many restaurants are closed. (Ellen Schmidt/Las Vegas Review-Journal) @ellenschmidttt 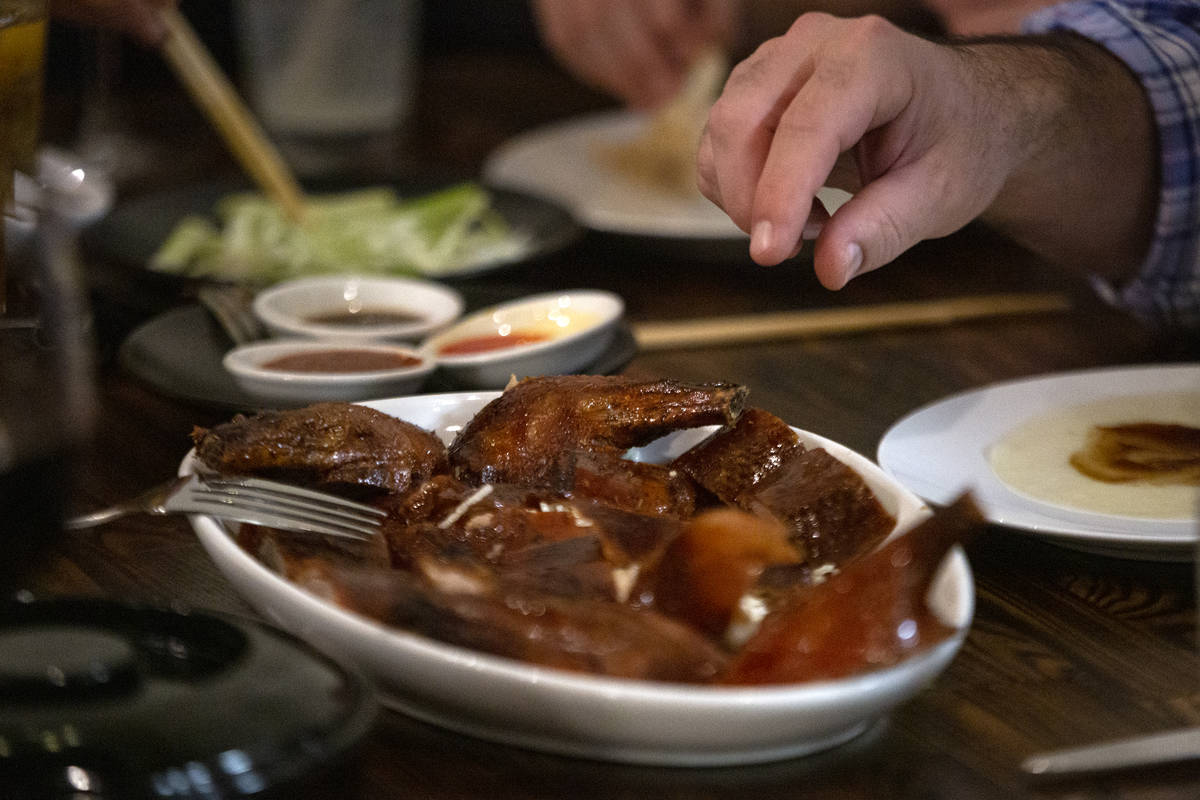 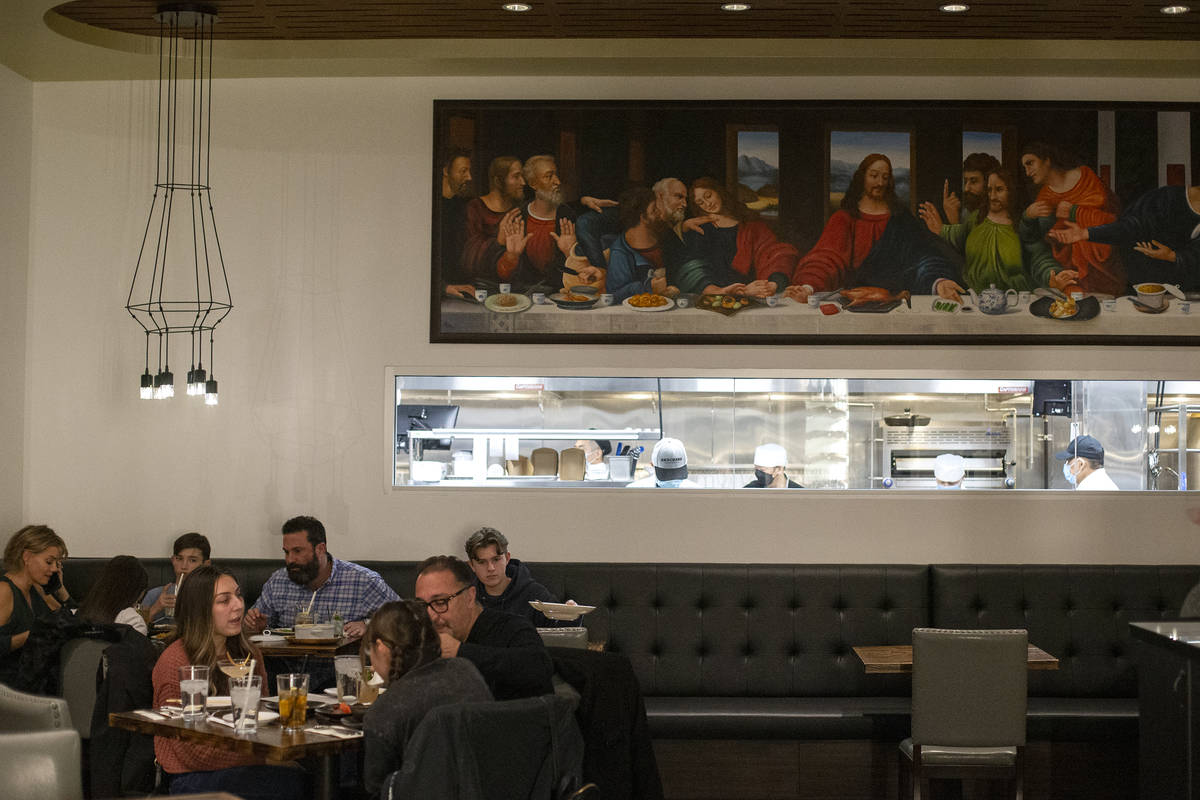 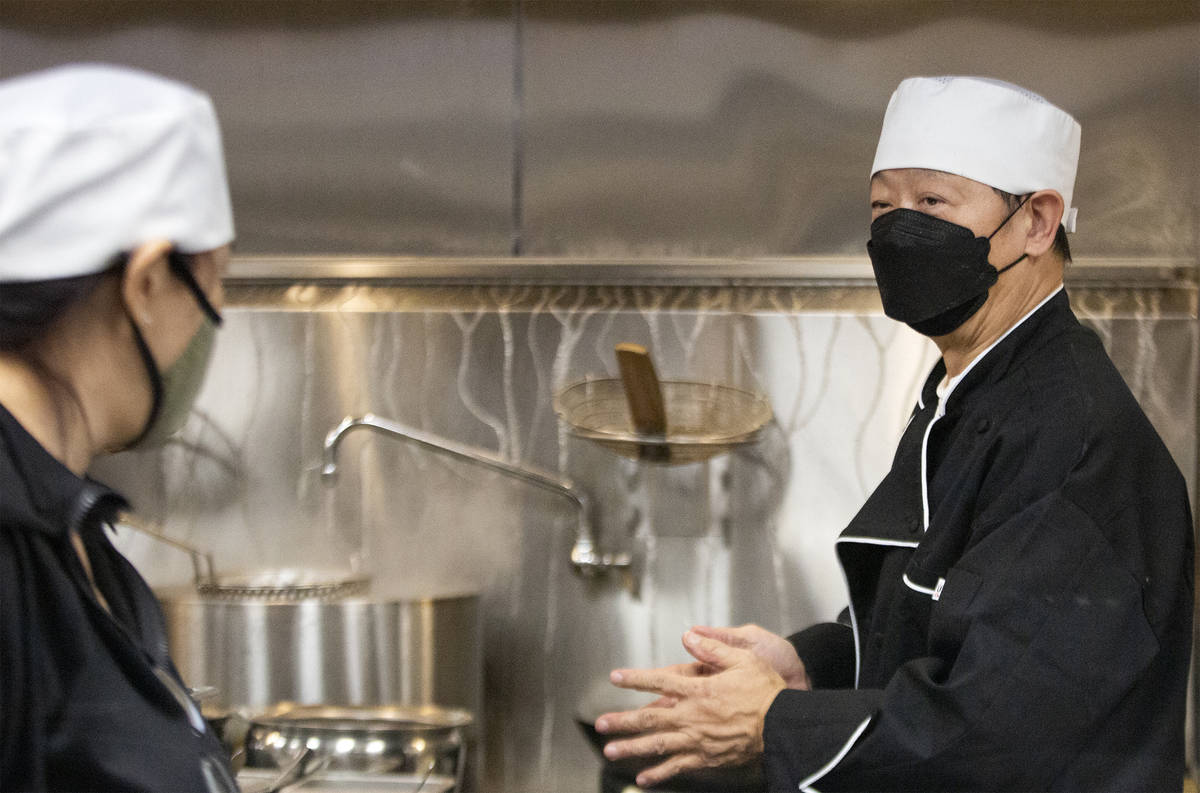 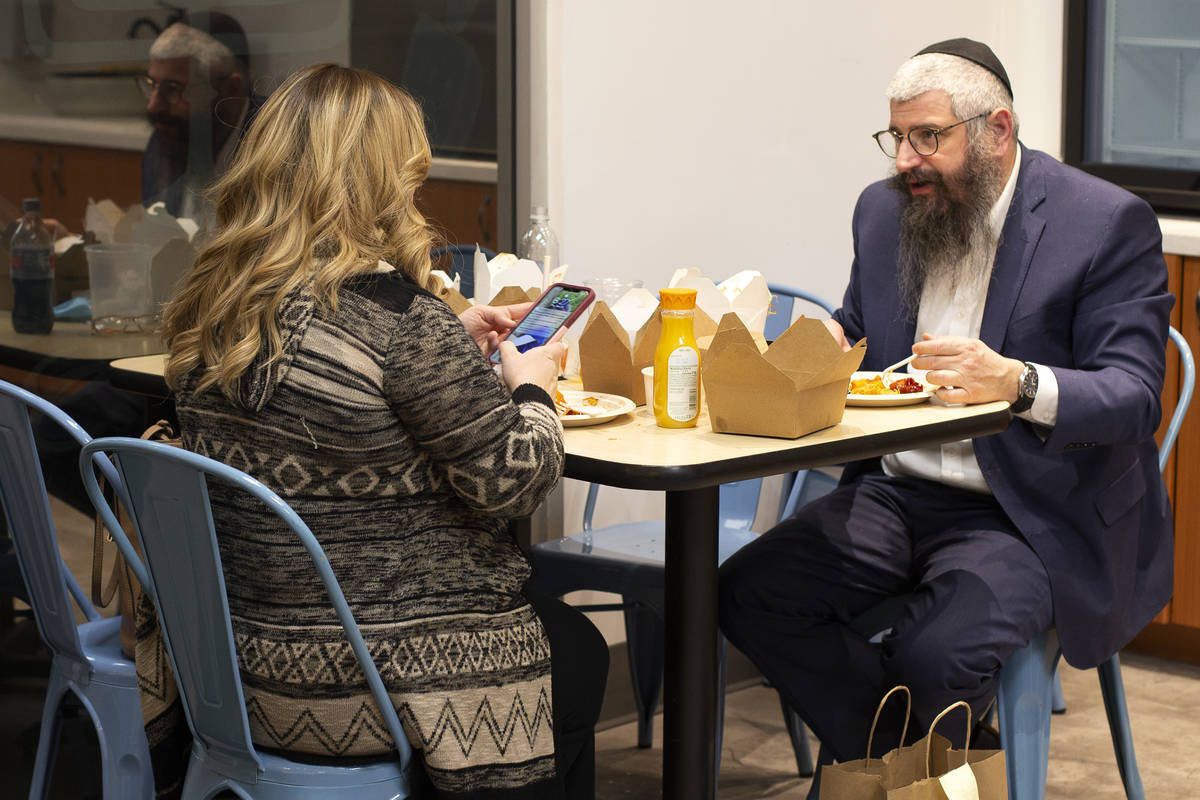 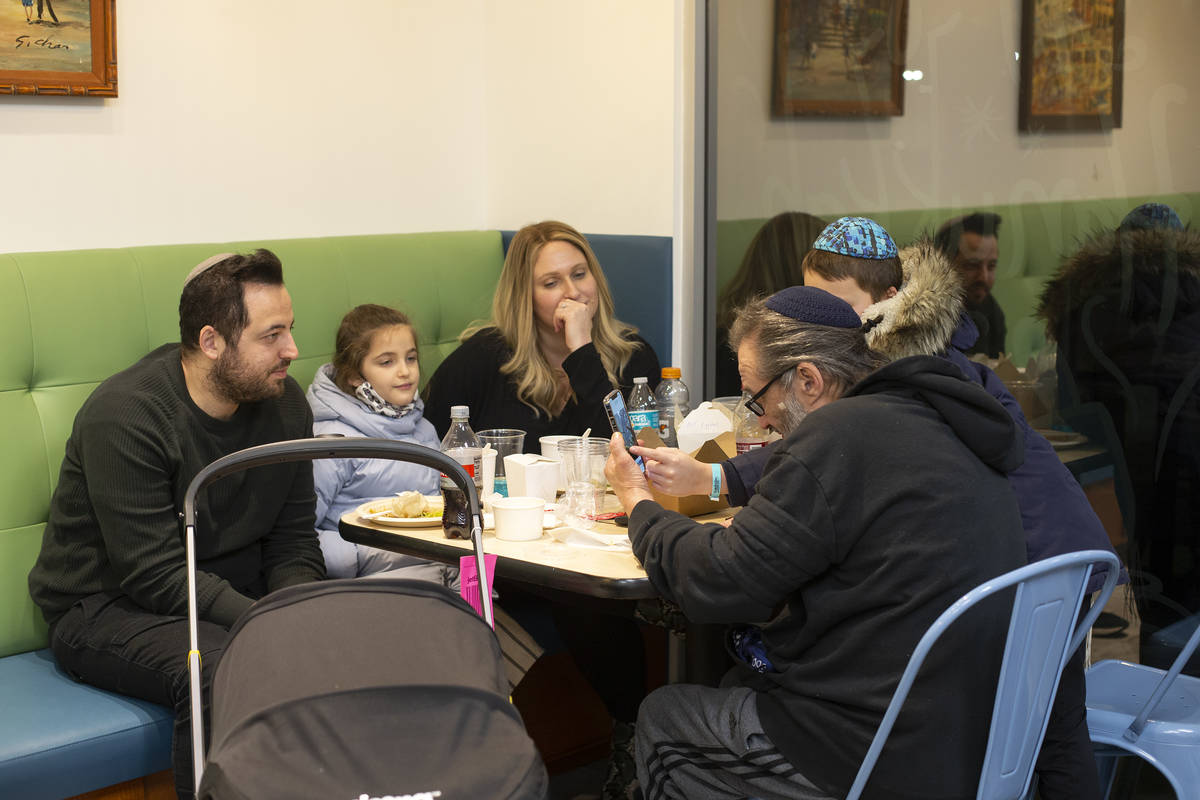 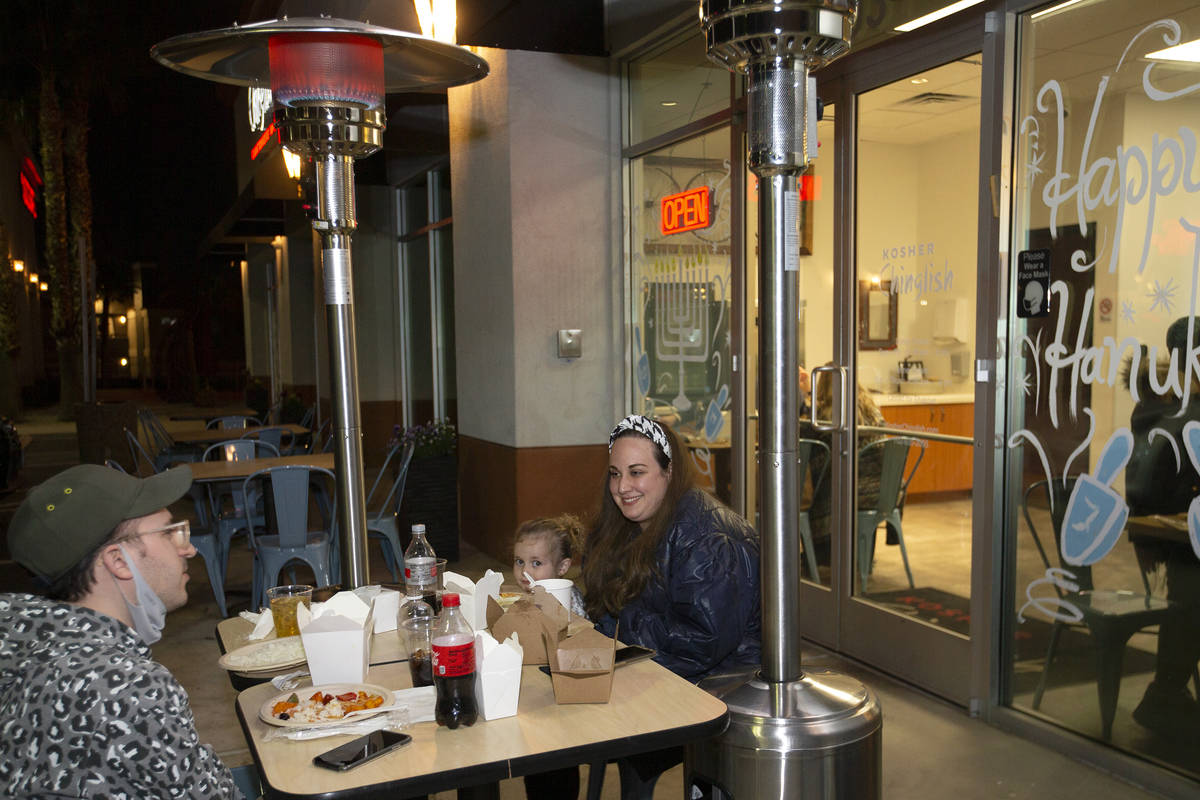 Like so many restaurants operating at 25 percent capacity these days, the dining rooms at Chinglish Cantonese Wine Bar, and the neighboring Kosher Chinglish, were “full” on Christmas Eve, despite looking rather empty. Their socially distanced tables were busy with customers.

In the more intimate, more casual kosher cafe, guests enjoyed dishes such as chicken dumplings, stir-fried eggplant with minced chicken and Mongolian beef. In the wine bar, Jews and gentiles alike sampled everything from beef short rib stewed in yellow curry to some decidedly non-kosher lollipops of pork shoulder and soy-glazed oysters on the half shell. Many washed down their bites with sips of expertly paired wines or sake. In the private dining area, a former U.S. congresswoman from Nevada dined with her party behind drawn curtains.

For many of the Jewish patrons, however, the two Chinglish operations offered more than just delicious Cantonese cuisine with options that honored religious dietary restrictions. The sister eateries, while less than three months old, also brought a much-needed sense of holiday tradition in a year when so many of our routines and rituals have been scuttled by COVID-19.

“I feel like it’s my obligation as a Jew to have Chinese food, especially Peking duck, on Christmas Eve,” joked Andrew Feiler, part of a party of five that had been split between two distanced tables. “It’s been a tradition for my entire life.”

Feiler grew up outside of New York City, where Chinese food for Christmas is a well-known Jewish tradition that can be traced back to the late 19th century. Brittany Winner, seated with her family a few tables away, says she learned of it from her Jewish grandmother while growing up in Orange County, California.

“What my bubby told me was that Chinese restaurants were the only restaurants that were open (for the holiday),” she explained. “So that’s where we went. And after 20, 40 years, it becomes a tradition.”

On Dec. 24 and 25, Chinglish’s idea of combining kosher and Cantonese offerings — to varying degrees in its two kitchens — clearly resonated with Las Vegas Jewish community. But one doesn’t open a restaurant, let alone two of them, simply to indulge a holiday tradition, no matter how dear. For Ken Heck, an observant Jew who married into a Cantonese family with a strong culinary tradition, Chinglish is all about family.

His wife, who has degrees in science and finance, runs the fronts of the houses. He works both dining rooms during dinner hours, after finishing his day job as a money manager. And his in-laws run the two separate kitchens.

Heck’s father-in-law Po Fai Lam, executive chef for both restaurants, is an accomplished chef who worked in prestigious kitchens in Beijing, Hong Kong, Manila and Chicago before opening three restaurants of his own in the San Francisco Bay area. He and his wife Anna Lam, who supervises Chinglish’s kosher kitchen, were first introduced to kosher traditions when Heck married their daughter Kitty.

“For years I’d been going to visit her mom and dad,” Heck explained. “And at some point, it became strange to them that I wouldn’t eat certain things. And they started to become aware of what kosher was.”

It wasn’t until the death of Heck’s mother in 2017, however, that the Chinese chef took a swing at kosher cooking — to assist the family while Ken, the family cook, was sitting shiva.

“They were worried that for those seven days I would have nothing to eat because I couldn’t cook. So they got on a plane, they flew down, and they sat in my kitchen. They moved in basically.”

The chef’s traditional recipes, interpreted through a kosher lens, were a hit. Heck laughed as he recalled his home being unexpectedly crowded with hungry friends through all seven days of mourning, and a rabbi distracted by the cuisine when it was time for prayer on the final evening.

“I looked over at the rabbi, and said ‘Rabbi the sun is down.’ And he said ‘Well, in 10 minutes the sun will still be down. Are there any more dumplings?’ ”

Beyond giving Lam the chance to flex his kosher culinary muscles, the visit sowed the seeds for the chef and his wife to move closer to Kitty and her stepchildren. They eventually sold their interest in the California restaurants, and moved to Las Vegas.

Once her parents were in town, Kitty and Ken Heck created their Wine Bar to give Dad a place to show off his elevated Cantonese cooking, which they believe is unlike what most Las Vegans have come to expect.

“Dad’s food has subtle flavors and fresh ingredients,” Ken explained. “Every dumpling is hand-folded. Every eggroll is hand-rolled. Nothing comes out of a bag. And it’s something that Kitty wanted to show to our friends and our community.”

The kosher restaurant next door, he said, was a way to make it a truly a family affair.

“Because I’m kosher, they wanted that I should be able to participate, and experience this food. And they thought my friends would also want to experience it.”

It took a while to adapt some recipes for the kosher side of the business, and find substitutes for ingredients such as dark soy sauce that don’t have kosher counterparts. When asked through Ken about that process, the chef asks that his daughter translate his reply, to assure none of the nuance is lost.

“At the beginning, kosher was very difficult,” Po Fai Lam admitted. “Now it has gotten much more comfortable. The things we use are different. I need to preserve our flavors as best as possible with limited ingredients, and it can be challenging. We’re still working through how to get more Cantonese kosher dishes on the menu.”

Until then, customers seem to approve 0f the offerings on both menus.

“I grew up in Queens, and I grew up with Mott Street and Bowery, and the best Peking duck houses in New York City,” customer Annemarie Feiler explained during her Christmas Eve meal. “And honest to God, this Peking duck is my favorite. It’s better than Mott 32 (on the Strip).”

Just as importantly, Winner’s twin sister Briana said, it allows family members with different traditions to dine out together.

“One of the reasons that I like Chinglish is that she keeps kosher at home, and I don’t keep kosher. And this is a restaurant where was can come together, and we can be together, and eat together without worrying. It’s really cool.”