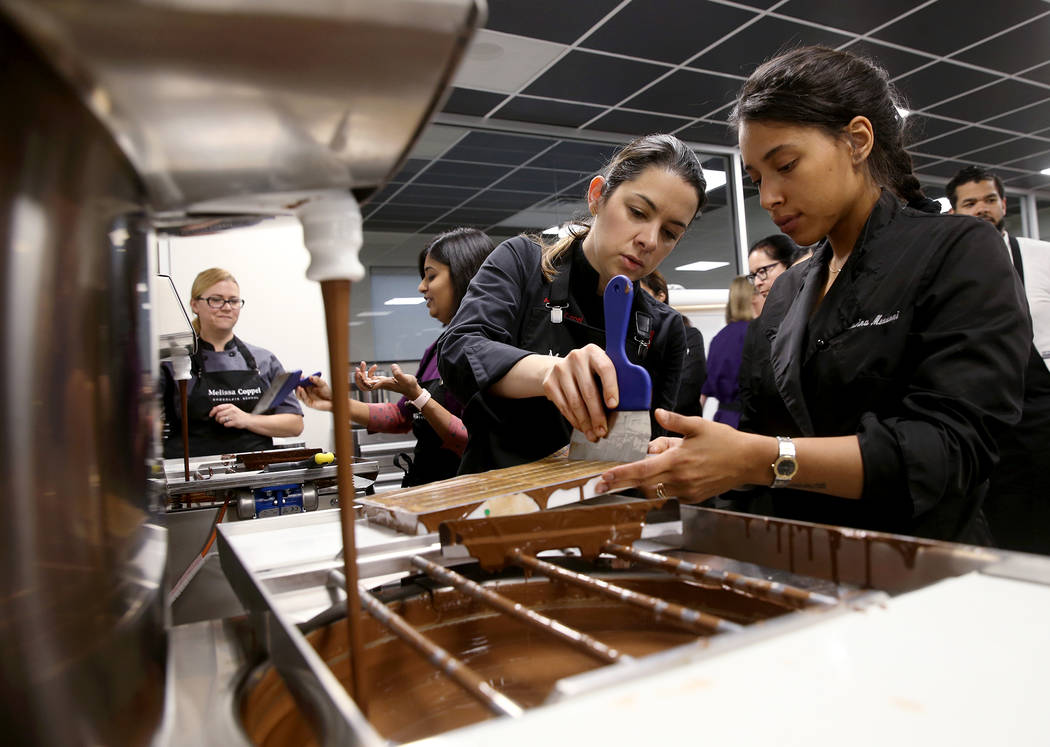 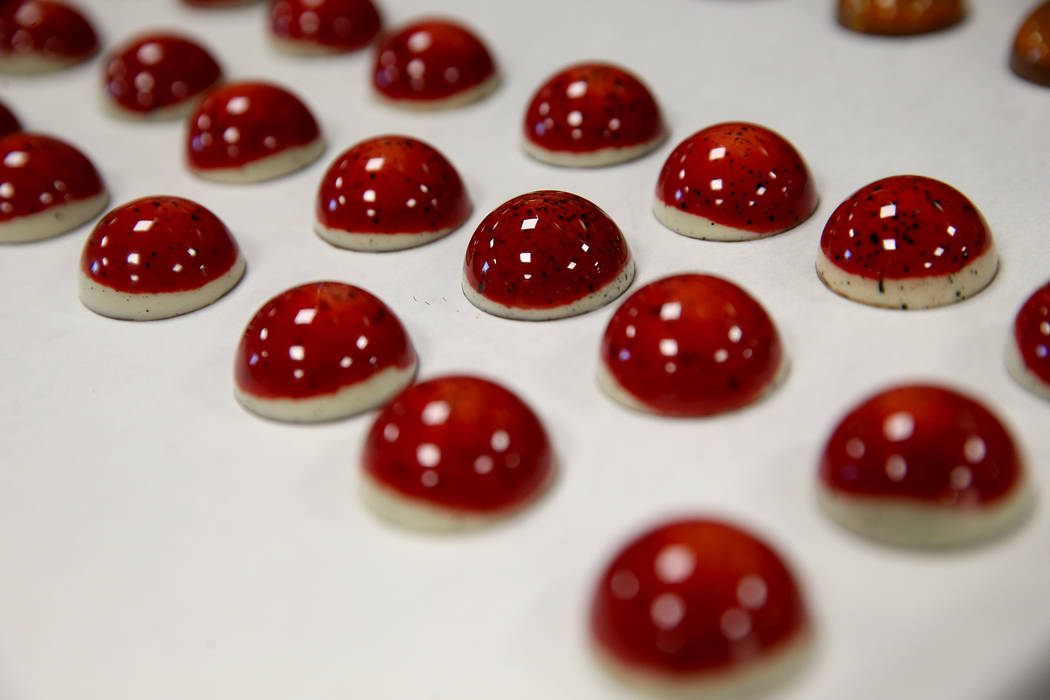 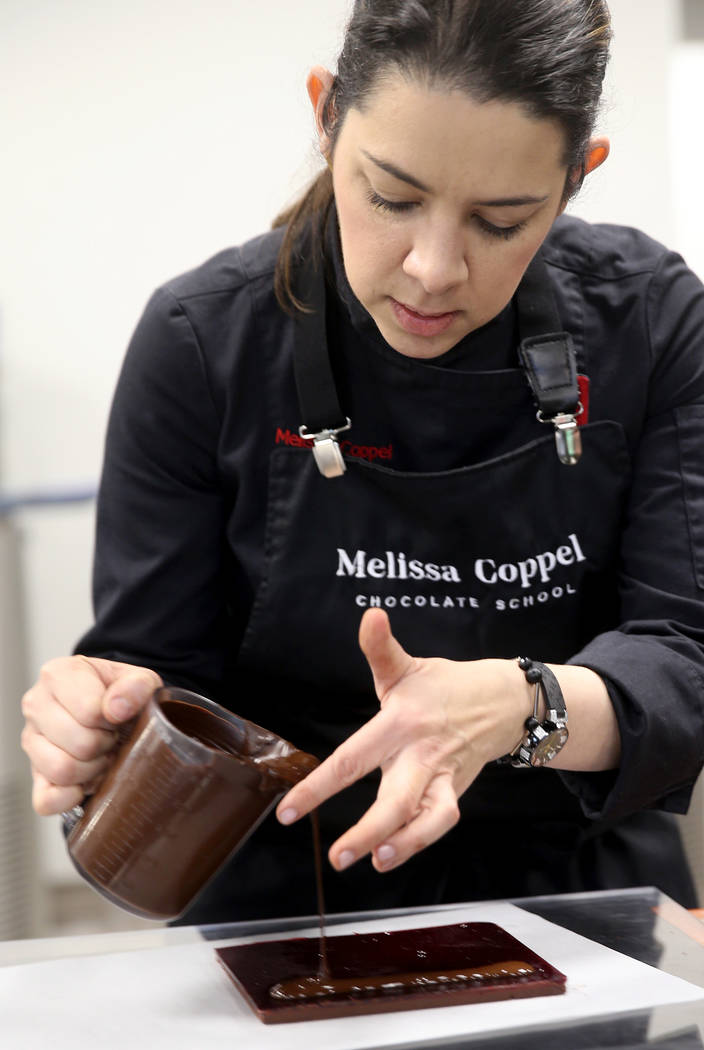 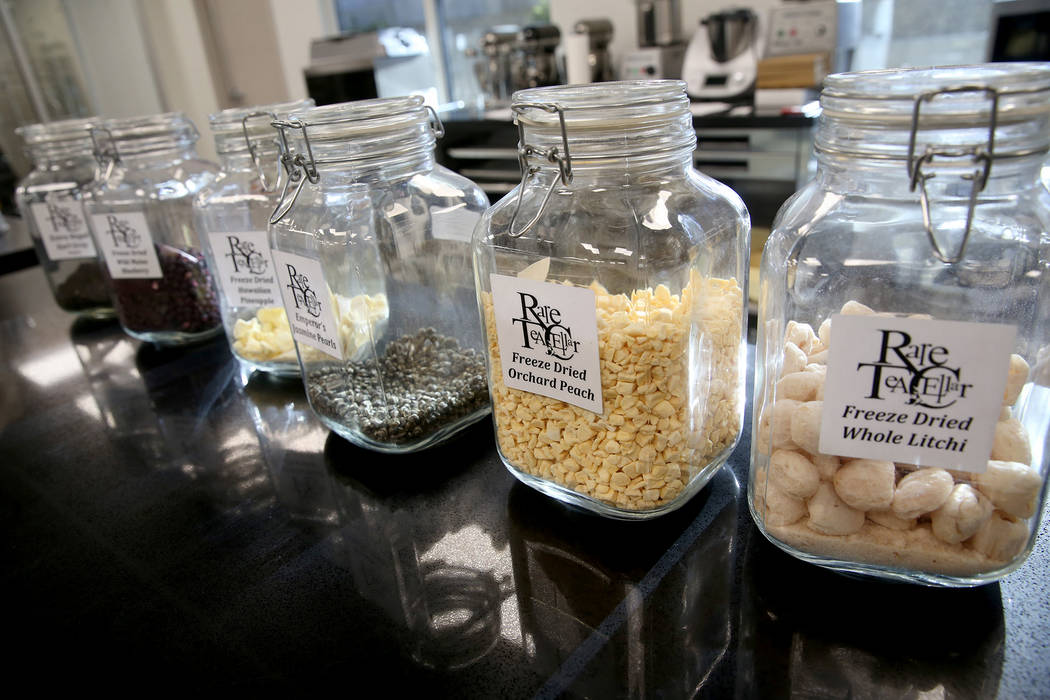 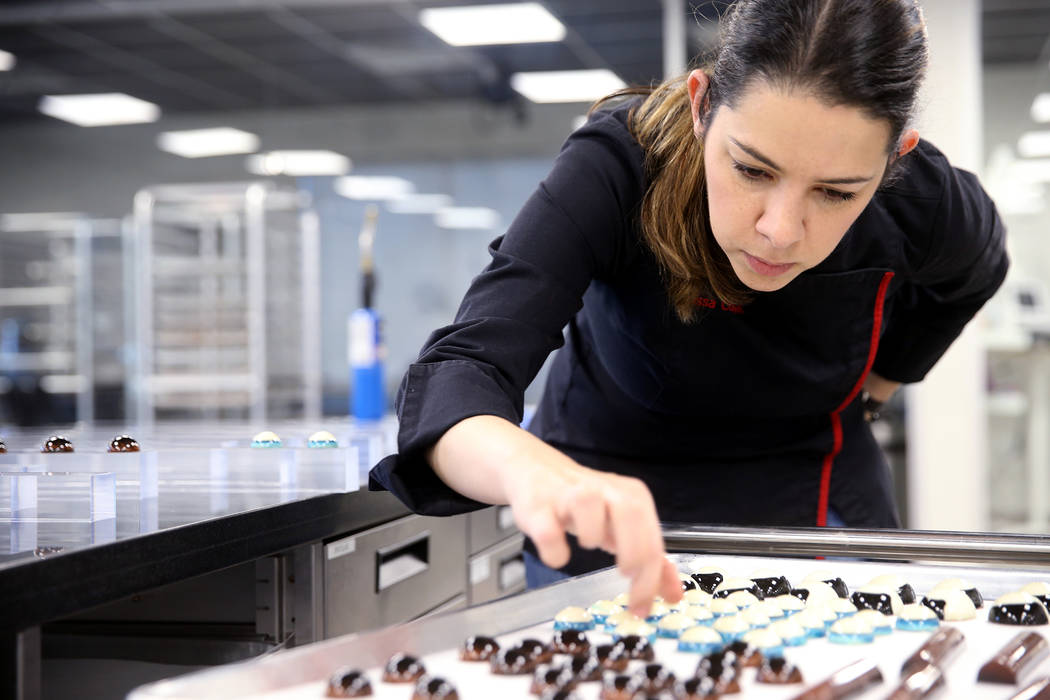 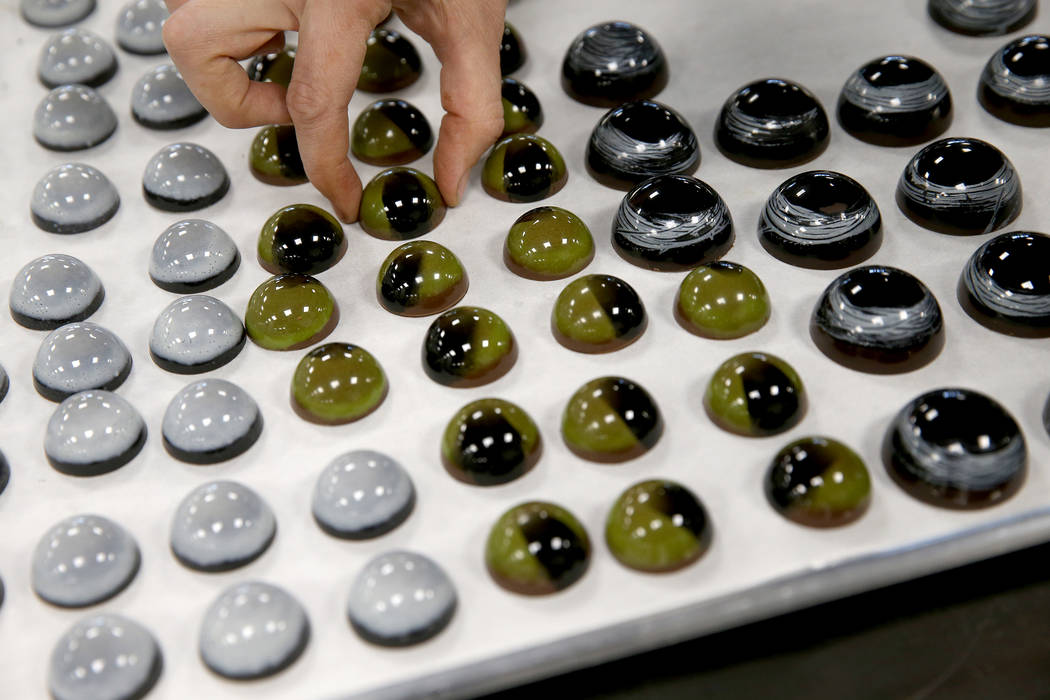 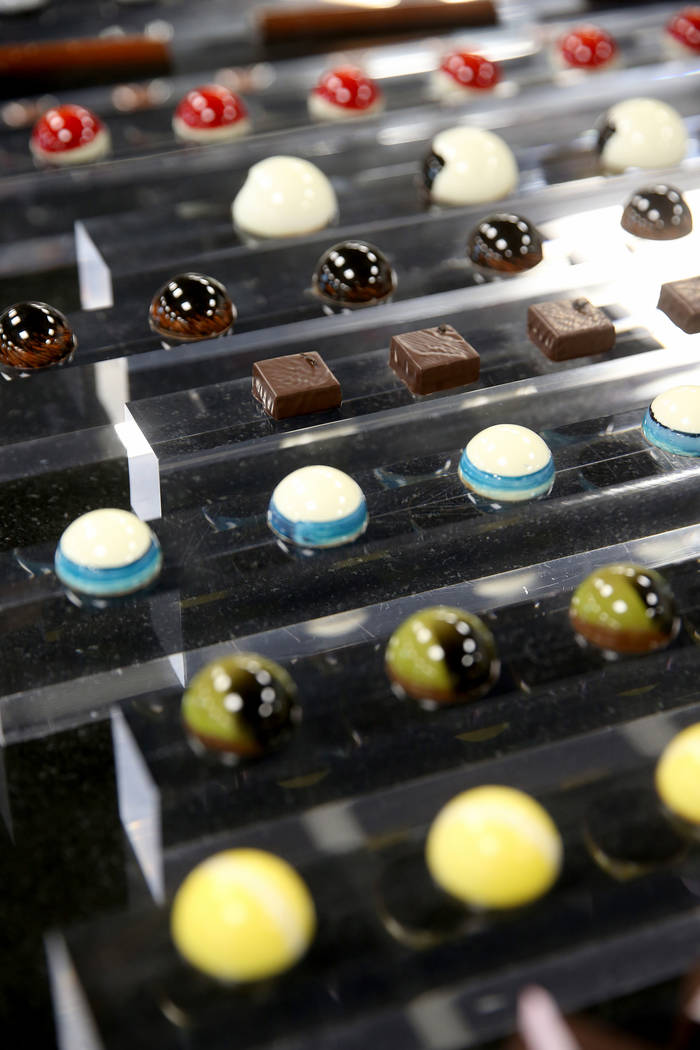 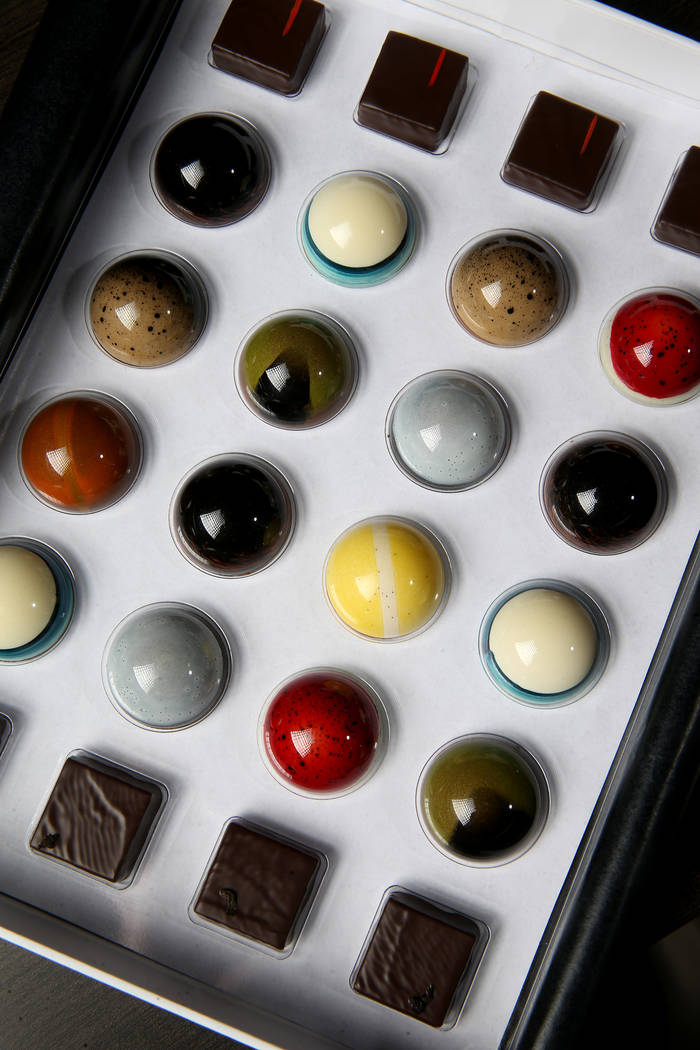 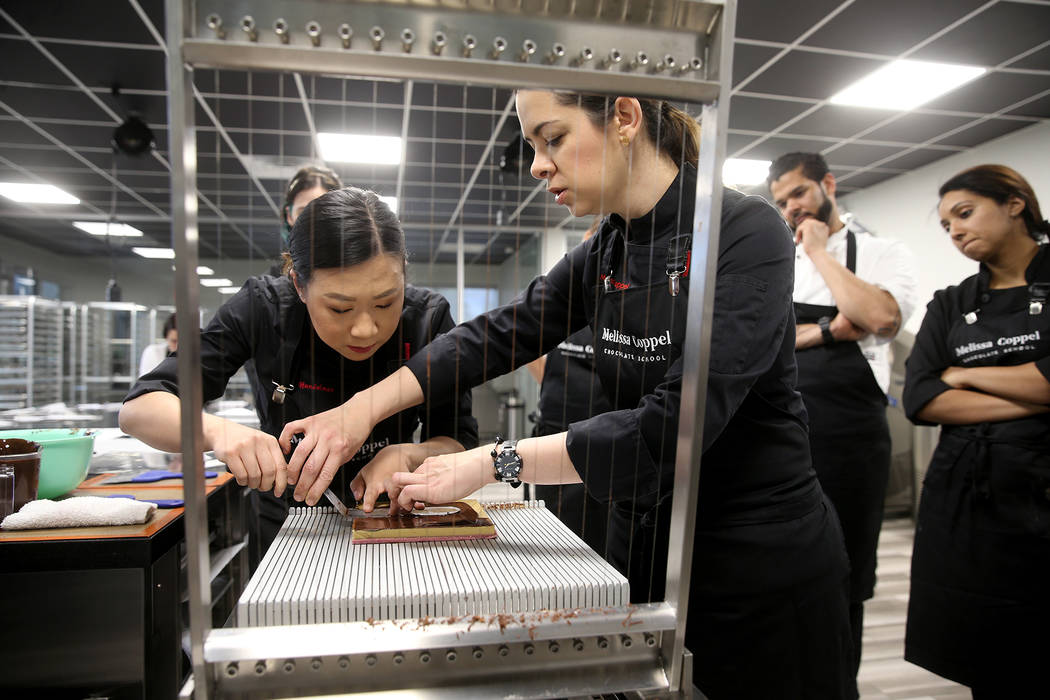 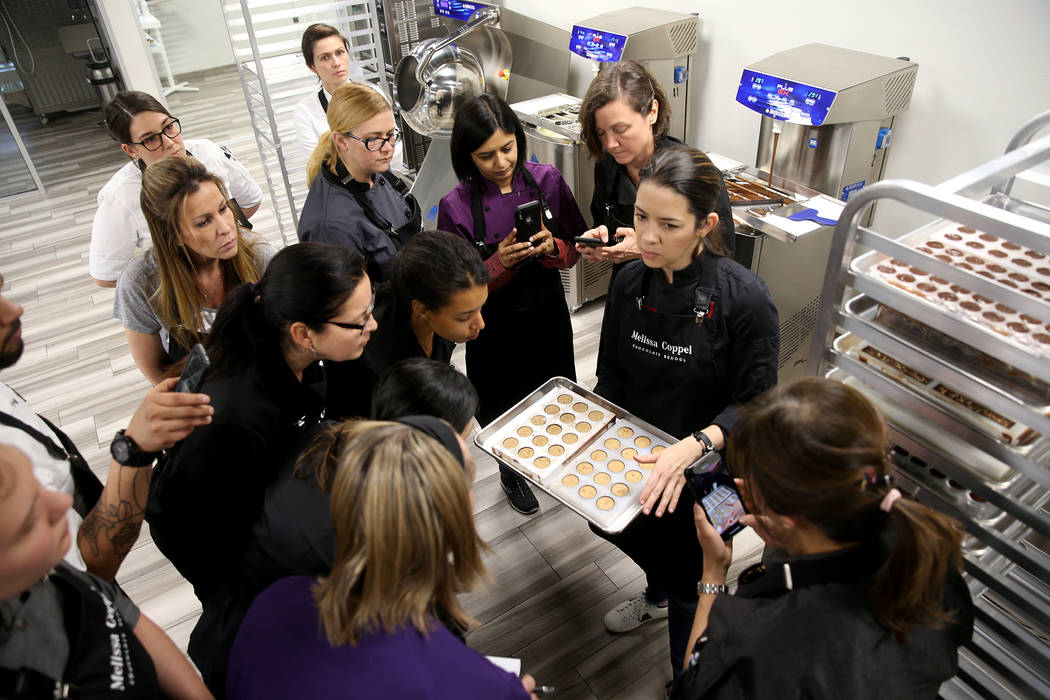 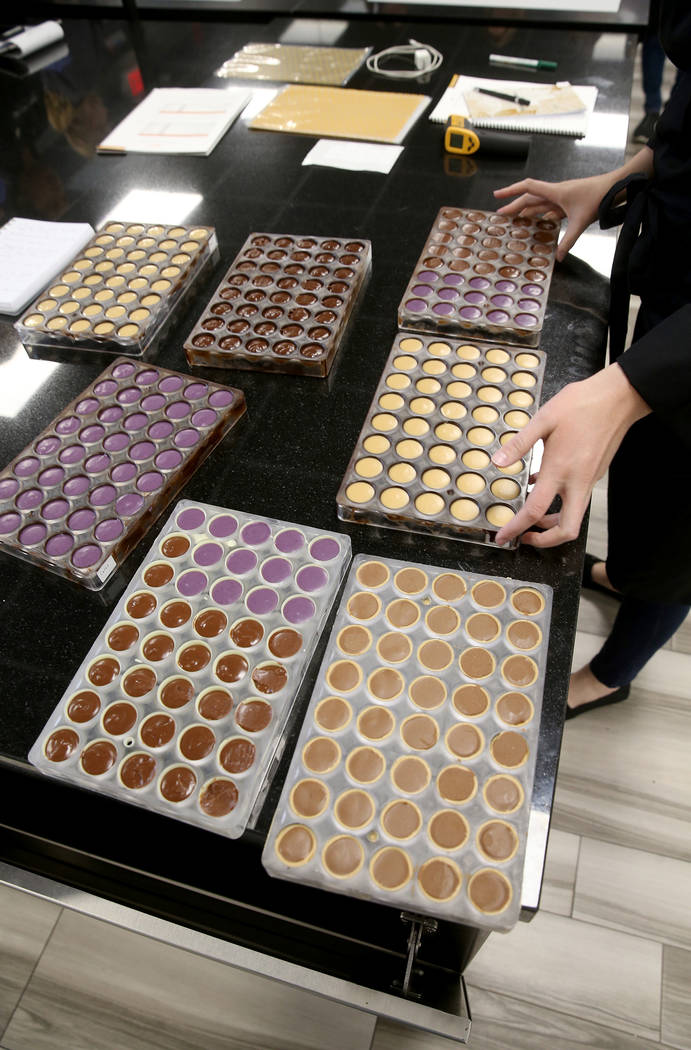 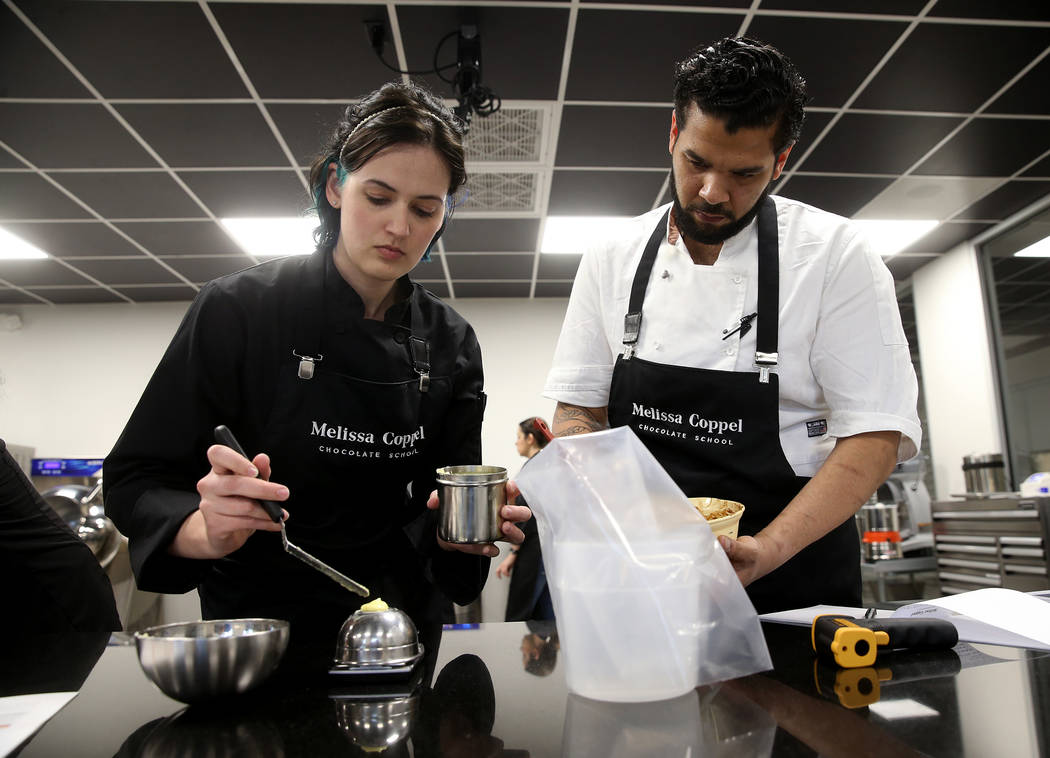 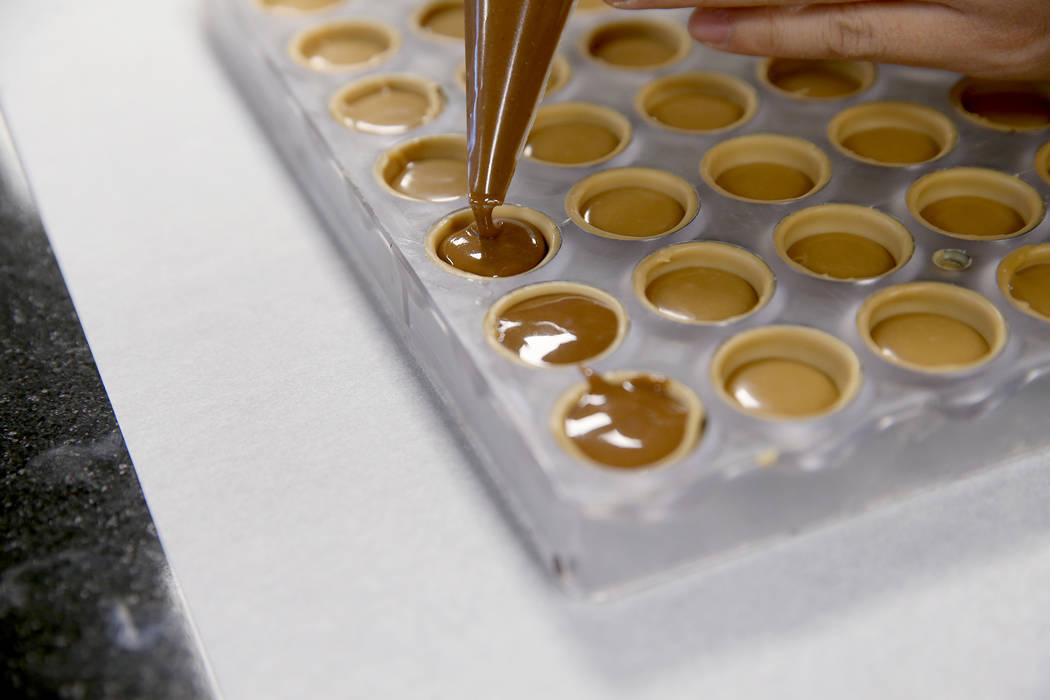 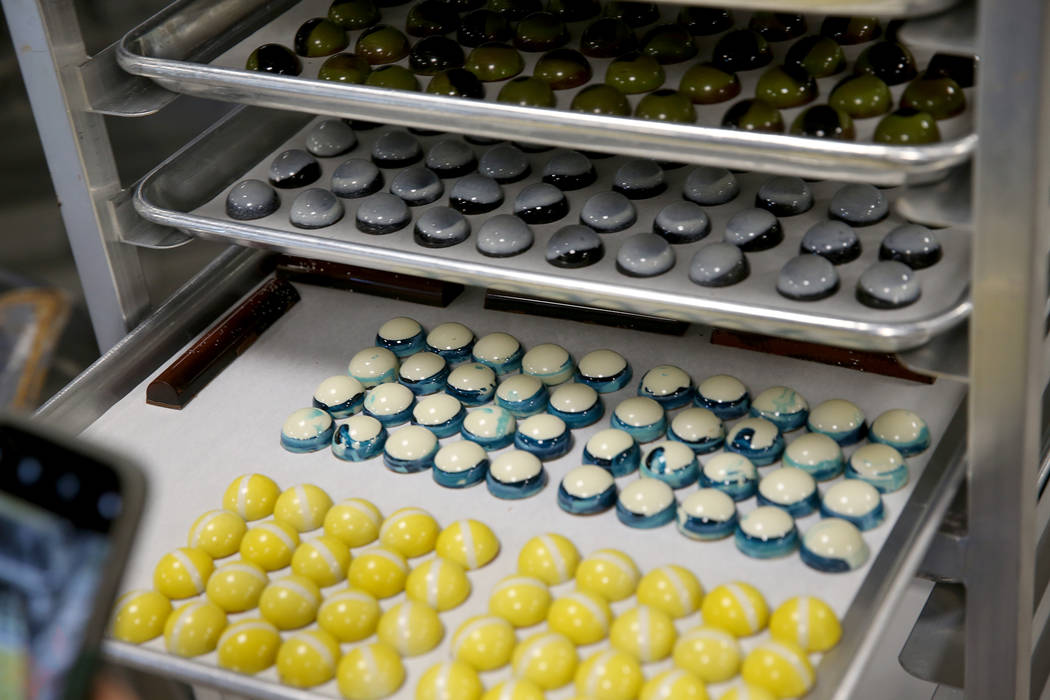 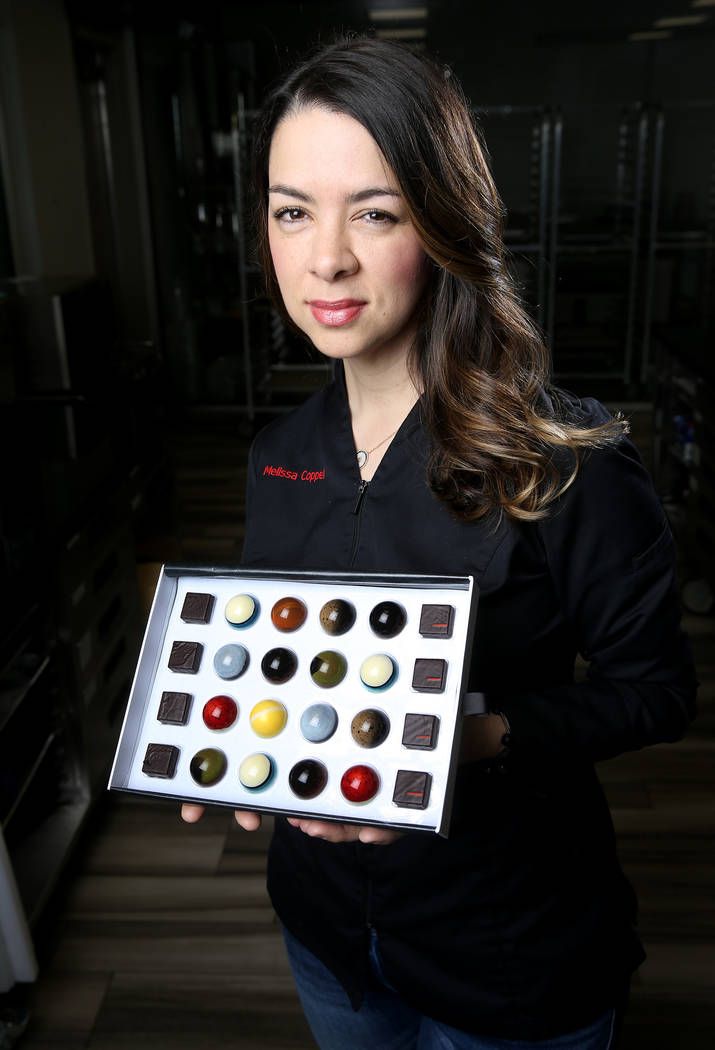 Melissa Coppel shows some of her creations at her Las Vegas chocolate school Friday, May 17, 2019. (K.M. Cannon/Las Vegas Review-Journal) @KMCannonPhoto

They came from as far as Canada and the U.S. East Coast to a tucked-away office complex in The Lakes — a quest somehow reminiscent of the Beatles’ 1968 trip to the Indian ashram of Maharishi Mahesh Yogi. But instead of studying transcendental meditation, these truth-seekers wanted to learn the secrets of chocolate. Their master: Melissa Coppel, owner/founder of the Melissa Coppel Chocolate and Pastry School.

Coppel, 38, is a native of Colombia who studied in Argentina and at the French Pastry School in Chicago before landing in the MGM Grand kitchens of Joel Robuchon. She launched her school about two years ago and averages about one class a month there and one a month in another country, with Japan, Singapore and Scotland checked off so far this year.

“I’m the only woman in the world who travels doing chocolate,” Coppel said.

Through social media and extensive word of mouth within the pastry and chocolate industry, her fame has spread, to the point where students sometimes exclaim, “We can’t believe we’re meeting you!” Coppel mimes a double-take and her continuing reaction: “Me?” Her acclaim surprises her, she said, “absolutely, every day. I just can’t believe it. I’m just a passionate person, sharing what I love.”

What’s so special about her chocolates? Coppel’s vast creative forces and obsession with perfection led her to experiment with new ingredients and techniques for her molded creations.

“It’s been done for years the same way,” she said. “How boring is this? How can I transform it into something? I started incorporating all these elements of pastry,” which resulted in dessert bars with flavors such as apple tart or cheesecake encased in a chocolate shell.

Besides playing with flavors, she worked on appearance; her bonbons have colors, patterns and a sheen that makes them look more like unset jewels than sweets to be savored.

“Her work is phenomenal,” said John Kraus, owner of pastry shops in the Minneapolis area and a former instructor at the French Pastry School. “There’s no one else like her. It’s evident that she paved her own path, and that’s really pretty incredible. It’s remarkable and it’s a beautiful profession and she’s got her place in it.”

“Melissa’s a pioneer,” said Evin Breton, a chef in New York City who attended a three-day class in May on the advice of his mentor. “She’s really doing great work here.”

“I don’t copy anyone,” Coppel said. “It’s very easy to know who’s copying, who’s not copying. We live on images.”

Her students are drawn to that pioneering spirit.

“I’ve been studying chocolate, and Melissa’s school kept coming up,” said Kimberly Chisholm, a native of Australia currently living in Calgary, British Columbia, who also attended the May class. “People said she was so knowledgeable, and so thorough.”

Michelle Pennell, who has a chocolate shop in Huntsville, Alabama, said she heard about Coppel through social media and “the pastry world.”

“I needed to break the daily cycle and learn from a master of the craft,” Pennell said.

And after the course?

“Every aspect was covered, from start to finish,” Pennell said.

“Best thing I’ve ever done, in terms of chocolate,” Chisholm said. “She is so willing to nurture and share information. Not a moment of arrogance.”

Coppel’s teaching style stemmed from her own experience, and examples of what not to do. When she was working at Joel Robuchon and returning to Chicago about once a month to further her education, she remembers feeling sad instead of motivated when leaving after a class. And then, when teaching male pastry chefs in Poland, it clicked: Those teachers had made her feel like she could never be on their level. They were egocentric, and hard on people who didn’t know as much as they did.

“No wonder I have a different approach to teaching,” Coppel said. “True learning only happens when you feel comfortable. Talent is 1 percent. The rest is the hard work and the passion you put into it.”

“When she starts her class, she kind of has an oath,” said Benoit Cornet, executive chef at Southern Glazer’s Wine & Spirits, who worked with Coppel at Joel Robuchon and has taken some of her classes. “She explains to every student from everywhere who come from all kinds of backgrounds that her school is not a place for ego. Here, we’re all the same way. We’re here to learn. She learns, too, from the students.”

“When they see me,” Coppel said, “they have hope.”