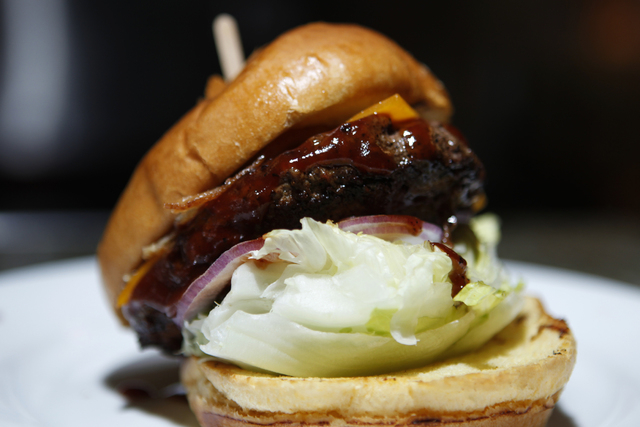 Each week Neon spotlights a different cuisine in the Dining Guide, with casual American restaurants this week. Restaurants are rated on a letter-grade scale, from A to F. Opinions by R-J critic Heidi Knapp Rinella (H.K.R.) are indicated by initials. Price symbols are based on the cost of an average entree: $ = entrees less than $10; $$ = entrees $10 to $20; $$$ = entrees $20 to $30; and $$$$ = entrees more than $30.

Add to Las Vegas’ fusion profusion the Hawaiian-Mexican cuisine of Braddah’s, where you can get a burrito, bowl or taco (or salad) with things like kalua pig and huli-huli chicken instead of carne asada or carnitas. It’s counter-service; you follow along the line and tell them what to add to your order. We loved our kalua pig burrito despite the grease that drained from it, and also tacos with huli-huli chicken and pulehu steak (no, not together) and a starter of guacamole and chips. (2/21/14 H.K.R.)

A friend’s attempt to tempt us into a vegan offering — the Tree of Life sandwich — failed but we ended up tasting it anyway, and seldom has vegan tasted so good. The Vegan Specialty Cake wasn’t as successful, but we thoroughly enjoyed the LGBTQ with its bacon and bacon jam, and the baba ghanoush with warm pita triangles. (8/23/13 H.K.R.)

Buldogis specializes in fusion food — that would be Korean flavor added to the classic American hot dog — and it works pretty well, as in the Banh Mi Dog, which comes with Vietnamese-inspired slaw and a slice of pork belly. Buldogis is breaking out into burgers, too, and the Bulgogi Burger successfully melded the two cuisines with bulgogi (Korean grilled beef), slaw and mayo. Fried pickle spears were pretty good, but we thought the Classic Buldogis fries needed a bit more seasoning. (11/16/12 H.K.R.)

The Carnegie Deli’s prices are up there — no doubt about that — but so are its portions and the quality of its food. It’s been eons since we tasted sauerkraut as wonderfully pungent as that which topped our open-face Reuben with its tender pastrami and blanket of Swiss, or corned beef with as many layers of flavor as that which formed the foundation of our huge platter of hash. And borscht was a bracing, refreshing feast of textures and flavors. (5/11/12 H.K.R.)

Service at The Daily Egg was with a smile but without a sense of urgency, but the food was so good we decided to just relax and go with it. What made it all worthwhile was the Classic Gyro Omelet, the chicken Shawarma Breakfast Pita, crispy home fries, a big fluffy pancake and a cup of well-varied fresh fruit. (1/11/13 H.K.R.)

When the only flaw we noticed during dinner at DB Brasserie was a too-thick chocolate sauce that wouldn’t easily flow out of its cup, you know Daniel Boulud’s casual spot is doing things as the master intended. We loved the country pate Bourguignon, Alsatian tarte flambee, Frenchie burger, steak frites, profiteroles and Black &White Fondant. (9/12/14 H.K.R.)

The Dillinger feels more like a bar than a restaurant but don’t let that put you off, because it’s warm and welcoming, just like its home community of little Boulder City. And the food transcends any idea of bar fare, with such dishes as a deftly fire-roasted artichoke, the brisket sandwich, the Ortega burger with its split-and-roasted Ortega pepper, and sides of onion rings and slightly sweet cinnamon-dusted sweet-potato fries. (12/14/12 H.K.R.)

The Egg &I — sister restaurant to the five Egg Works in the valley — was positively packed when we went late on a weekday morning. The draw, no doubt, is the simple American fare, kicked up a notch in dishes such as house-made shredded corned beef hash and eggs, a Sicilian Skillet with Italian sausage, marinara, peppers and onions and warm banana muffins rich enough to qualify as an indulgence. (6/21/13 H.K.R.)

Elixir bills itself as “a local lounge” but, following the recent practice among poker bars, its menu lists far more than bar food. Stuffed mushrooms were a good way to start, but we thought the flavors in the French onion soup, beef stroganoff and chicken roulade were a little too generic. (12/16/13 H.K.R.)

Grill 55 is first and foremost a bar — the laid-back counterpart of the hotel’s Envy Steakhouse — so the atmosphere can get a little crazy during busy times at the adjacent Las Vegas Convention Center, but it serves nothing in the way of old-school bar food. We loved the Truffle Reggiano Fries, the Devil’s Eyes fried deviled eggs, the Signature 55 Burger and the barbecued chicken flatbread pizza. (11/9/12 H.K.R.)

Plate-sized pancakes that are light and fluffy but still substantial enough to hold together, porous enough to absorb the butter and syrup, can be somewhat of a challenge. But not at The Griddle, where they come off the griddle perfectly. We had them as part of a Lumberjack platter that also included a couple of eggs and bacon or link sausage. Also worthy of note: the crab cake Benedict, one of a long list of The Griddle’s Benedicts and one with a crab-centric base and a well-executed Hollandaise. (6/29/12 H.K.R.)

Johnny Mac’s has been around since 1983 — making it practically ancient by Southern Nevada standards — and that’s reflected in the old-school bar-and-grill nature of the place and dishes like a tomato-basil pizza that was neither thick nor thin and a shepherd’s pie evening special. But they keep up with the times, too, with such touches as the creative and well-conceived watermelon barbecue sauce on crispy-skinned wings that do Buffalo proud. (7/11/14 H.K.R.)

A chef/owner of Korean origin gives some of the dishes at this mom-and-pop a bit of Asian-fusion flavor, which makes the breakfast grind a lot more interesting. We liked the kalbi and eggs with rice, the Korean omelet with seasoned potatoes and the friendly, accommodating service. (11/14/14 H.K.R.)

While we thought the menu descriptions could be a little more clear we mostly liked the food at MTO Cafe, including a cheesy potato soup with bacon, French onion soup and the Spam Madame. We also liked the atmosphere of the bright, airy space across from Las Vegas City Hall, with whimsical art for a dash of fun. (3/14/14 H.K.R.)

One step from fast food, the counter-service Mac Shack offers economical, well-prepared pasta dishes in a sleek, casual atmosphere and seems to be of particular interest to busy families. We designed our own rigatoni dish with marinara, meatball and sun-dried tomatoes, and also liked the Farmhouse Pasta, farfalle with creamy sauce, ham and peas. But we’d advised skipping the oh-so-plain garlic loaves. (8/10/12 H.K.R.)

Pot Liquor serves tender, moist, deeply flavored barbecued meats (the “C.A.S.” stands for “contemporary American smokehouse”) but also yanks the Southern tradition out of the doldrums with dishes like deviled eggs with chicken skin cracklings, a fried-green-tomato salad with goat cheese, chili with a corn cake underneath and fries with Alabama white barbecue sauce. (11/21/14 H.K.R.)

That Presto is different from the average neighborhood cafe isn’t immediately noticeable but is manifested by its healthful emphasis and the Turkish flatbread pides, with a crust that’s lighter than a pizza. We loved our Italian pide and some ahi tuna sliders and were positively crazy about the very offbeat mushroom soup. (3/7/14 H.K.R.)

Rise &Shine is adorable, with big flower-shaped umbrellas suspended from the ceiling and servers in pajamas, but whimsy wouldn’t be enough if the food didn’t measure up. It does, in fact, in entrees such as The Ultimate Steak &Egg Breakfast and corned-beef hash and eggs, as well as the restaurant’s pot of bread and French-press coffee, which comes with a timer. (10/4/13 H.K.R.)

Five locations in the valley

Multiple locations in the valley

Smashburger is the new burger chain in town, and while its name may seem a little off — who wants smashed food, aside from, maybe, potatoes? — the burgers, which are smashed onto a flat-topped grill as they’re cooked, are juicy and addictive. We loved the Sin City Smashburger, with its fried egg, bacon, cheese, grilled onions, haystack onions and signature smash sauce, a create-your-own option with everything but the kitchen sink, the fried pickles and the Smashfries. (8/11/12 H.K.R.)