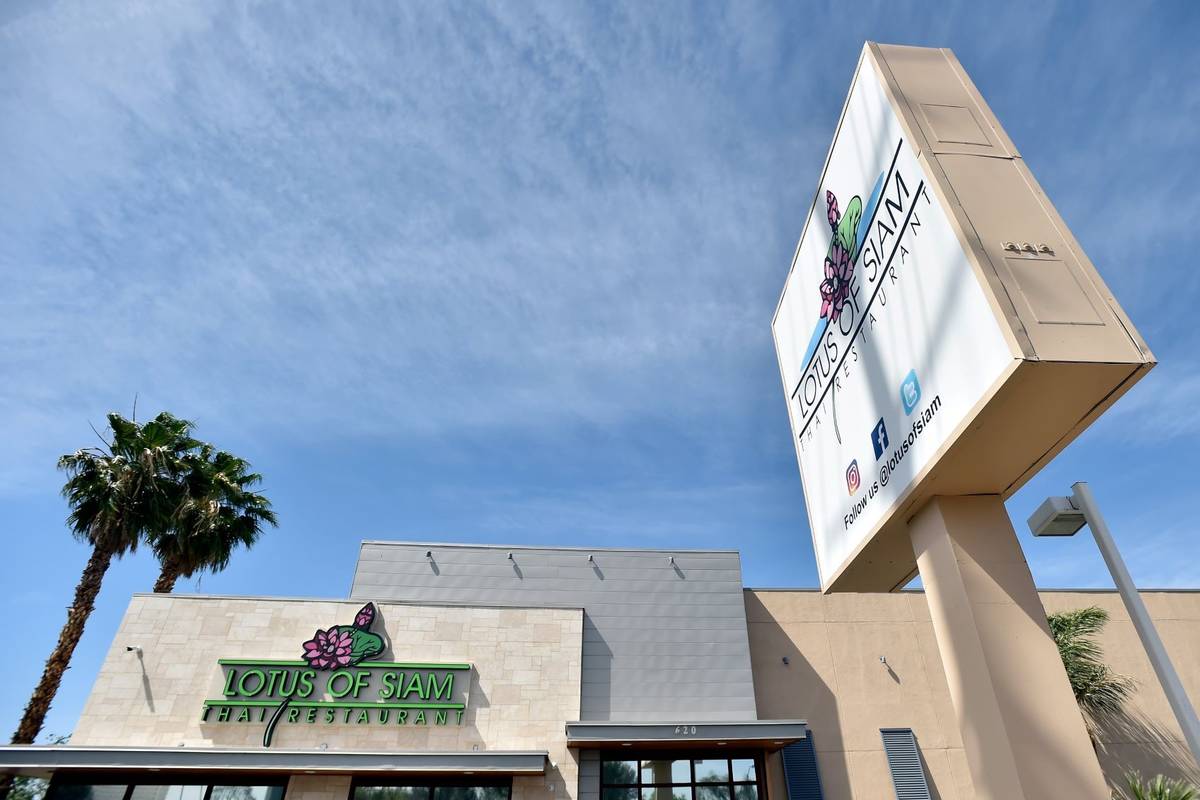 Lotus of Siam restaurant is seen along East Flamingo Road in 2018 in Las Vegas. This location will remain open, while the East Sahara Avenue location will temporarily close. (Las Vegas Review-Journal)

Restaurant owners have been lamenting the worker shortage in Southern Nevada for months, and the lack of applicants has pushed one venerable Las Vegas restaurant to temporarily close one of its locations.

The family-owned and award-winning Northern Thai restaurant Lotus of Siam announced Monday in a Facebook post that it temporarily closed its location at Commercial Center, near the corner of East Sahara Avenue and Maryland Parkway. Its second location at 620 E. Flamingo Road remains open.

“The Sahara location is basically the first child for Chef Saipin so for her to make that decision was hard but we had to be considerate of our employees,” said Manager Courtney Barnett.

Barnett said Lotus of Siam. has been unable to fill open positions at the Sahara restaurant and the staff shortage meant current employees had to work overtime and pick up extra shifts.

“It was draining both physically and mentally. We needed to put their health first,” she said. “We also pride ourselves on the service we give our guests. With us being so short staffed, we weren’t able to live up to those expectations.”

Lotus of Siam is not alone. A number of Las Vegas Valley restaurants such as Hofbräuhaus and Omelet House say unfilled positions have meant longer wait times for customers and over-worked employees. It’s also become a nationwide problem impacting not just independent restaurants and nationwide chains but other industries as well.

The U.S. Chamber of Commerce reported earlier this month there are half as many available workers for every job in the country as there have been on average over the past 20 years.

“The worker shortage is real — and it’s getting worse by the day,” chamber President and CEO Suzanne Clark said in a release. “American businesses of every size, across every industry, in every state are reporting unprecedented challenges filling open jobs.”

Barnett said for now the Commercial Center location will remain closed until it can hire enough employees. She said even though staff relocated to work at its Flamingo location that site is “surprisingly” still short-staffed.

Barnett said in total Lotus of Siam is looking to fill at least 20 positions, mainly for back-of-house operations.

“The sooner we hire people and get them trained and make sure everybody is knowledgeable about health standards — because that’s a priority for us — we’re going to open our doors again,” said Barnett.