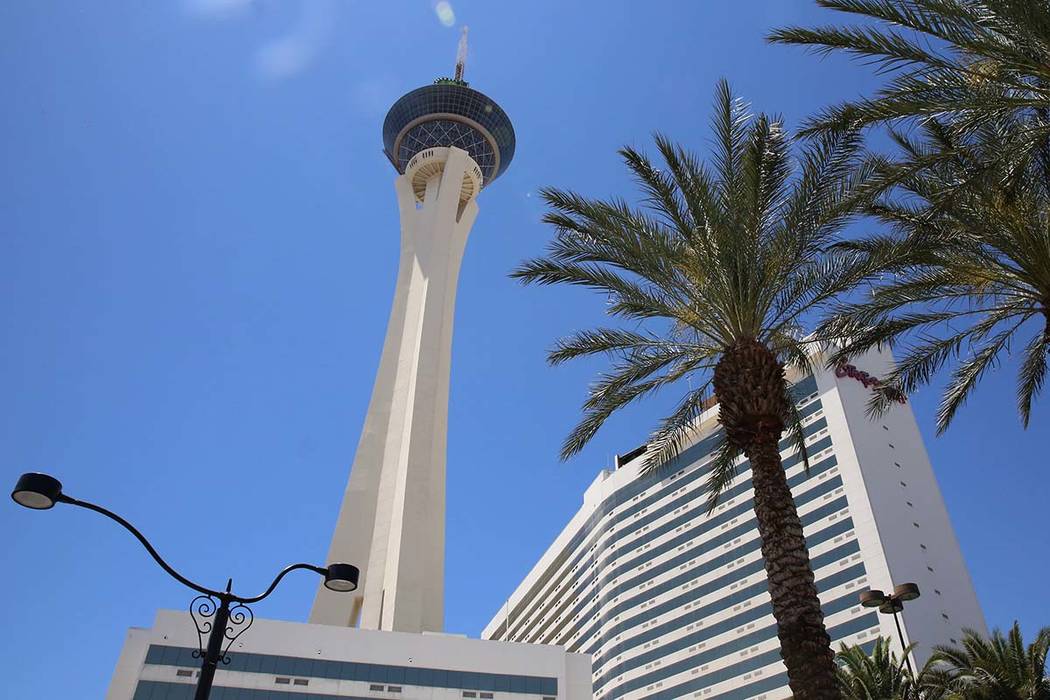 The Stratosphere hotel-casino on Monday, June 12, 2017, in Las Vegas. Golden Entertainment, operators of the PT’s Pubs chain is acquiring a company that owns four Nevada casinos, including the Stratosphere and Arizona Charlie's for $850 million. Bizuayehu Tesfaye/Las Vegas Review-Journal @bizutesfaye

The newly-rechristened Strat is promising its Blvd & Main Taphouse and View Lounge will open later this month, in time for the NHL playoffs and college basketball postseason.

With more than 6,000-square-feet of space on the main casino floor adjacent to the sports book, Blvd & Main will pair craft beer with elevated pub cuisine. It and the 3,000-square-foot View will be decorated with original works by local artists such as Manny Avila, Liz Lagumina and Biscuit Street Preacher and Devin Valdivia.

The Blvd & Main menu will be overseen by executive chef Johannes Bernau, a veteran of now-closed Springs Cafe by Wolfgang Puck, Santa Fe Station’s Charcoal Room and e by Jose Andres, who recently returned to Las Vegas after a stint in Southern California working with Signature Brands. It will offer creative comfort food such as poutine, Buffalo-fried oysters and a stone-fired flatbread topped with pepperoni, ground beef, corned bison, bacon and mozzarella.

Guests will be able to wash those down with a pick from a beer collection curated by PT Brewing Company’s Dave Otto. Otto is an O.G. of the local brewing scene who dropped out of UNLV more than 20 years ago to take an assistant brewer’s position at the now-defunct Holy Cow Casino.

He’s developed a signature beer to roll out for the taphouse’s opening: a mild golden ale called Jaywalker that’s 5.2 percent alcohol by volume with a touch of malt sweetness, low bitterness and a hint of “old world” hop aroma. It will be poured alongside two of his other creations for Strat parent company Golden Entertainment’s PT’s taverns: Sean Patrick’s Irish Red and Hualapai IPA. Other local brews featured among the bar’s two dozen taps will be CraftHaus Evocation Saison, Tenaya Creek Bonanza brown ale and Banger Brewing’s Morning Joe.

Cocktails in the taphouse and lounge will be created by Jason Shullo, Golden Entertainment’s corporate director of beverage. Before joining the Golden team, Shullo spent time behind the bars of Aureole, Twist by Pierre Gagnaire and STK.

The Strat is in the midst of a $140 million upgrade and rebranding that included a February name change from Stratophere to Strat.