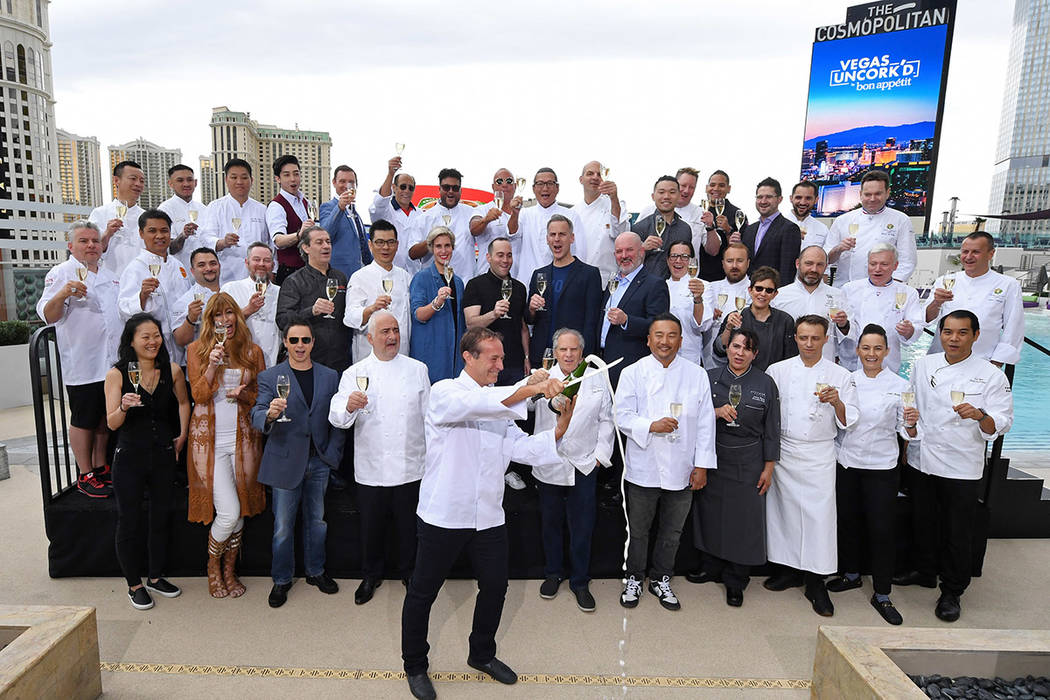 Chef Bruce Bromberg (front) marks the beginning of the 13th annual Vegas Uncork'd by Bon Appetit presented by the Las Vegas Visitors and Convention Authority featuring chefs from Caesars Palace, The Cosmopolitan of Las Vegas, MGM Resorts International, The Venetian Resort and Wynn Las Vegas, with a ceremonial champagne saber-off at the Boulevard Pool at The Cosmopolitan of Las Vegas on May 9, 2019 in Las Vegas, Nevada. (Photo by Ethan Miller/Getty Images for Vegas Uncork'd by Bon Appetit)

Dozens of chefs representing some of the Strip’s top restaurants gathered Thursday at The Cosmopolitan of Las Vegas to launch the 2019 edition of Vegas Uncork’d by Bon Appetit.

In keeping with tradition, the food festival officially opened with at a Saber-Off: the opening of a champagne bottle with a saber. This year’s kickoff was held at the Cosmo’s Boulevard Pool. And despite some early rain showers, the weather cleared up enough for all the chefs to come out of their cabanas for it.

Bruce Bromberg, chef partner in the Blue Ribbon restaurants, did the honors standing in front of the all-star cast of culinary talent. And unlike previous years, where it’s taken several tries to get the job done, he had the bubbles flowing with one fell swoop.