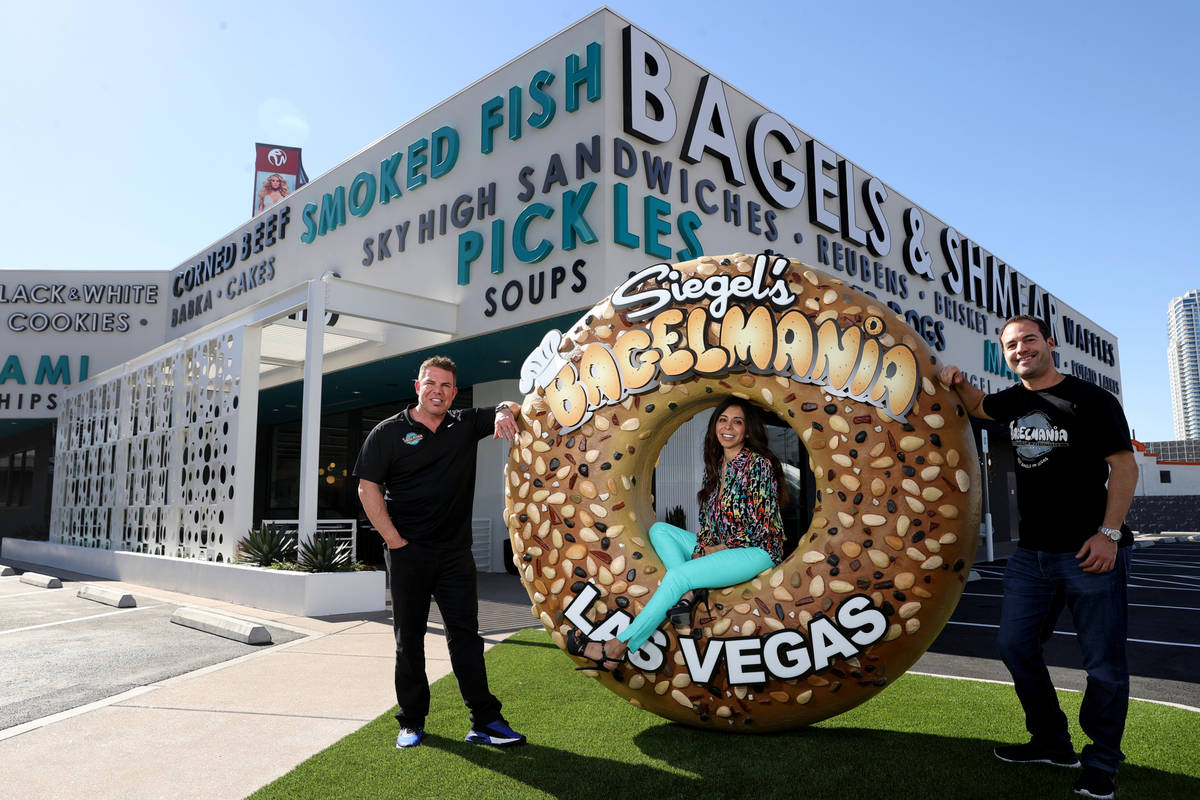 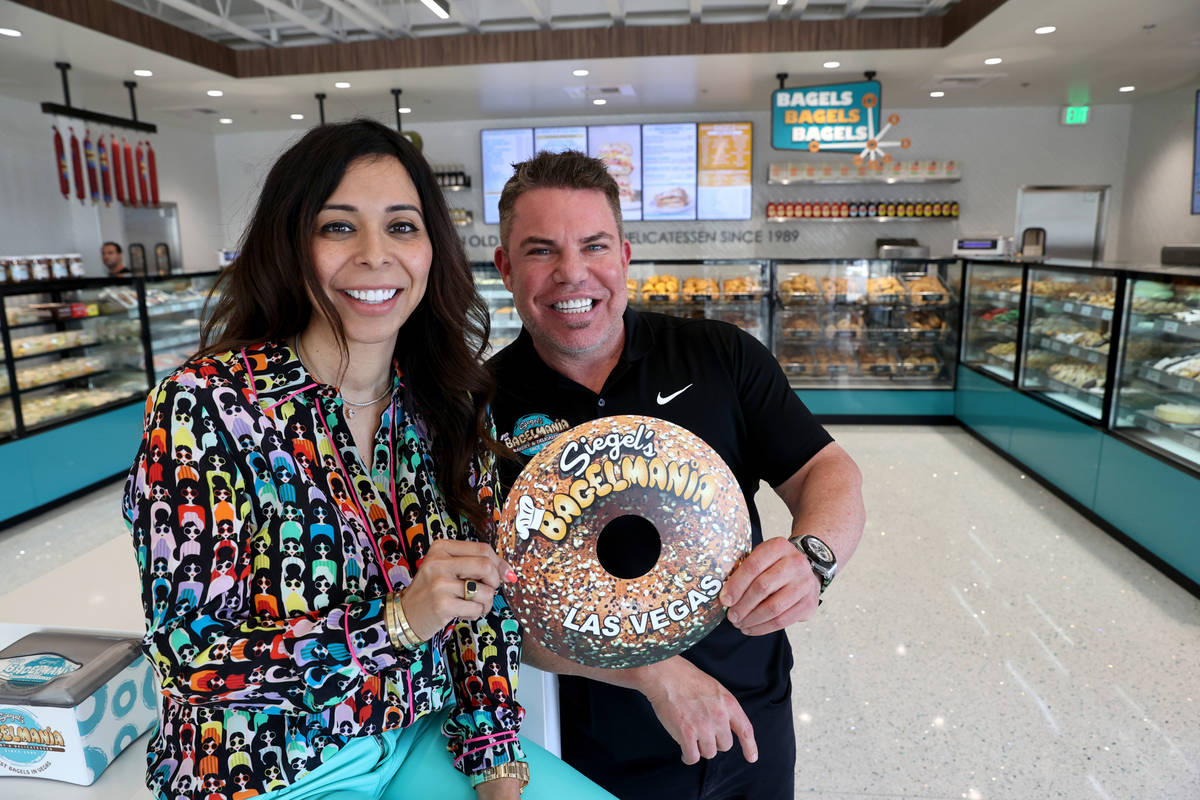 Stephen and Judi Siegel owners of Siegel's Bagelmania on Convention Center Drive in Las Vegas Monday, May 24, 2021. The deli and eatery opens on Friday next to the West Hall expansion of the Las Vegas Convention Center. (K.M. Cannon/Las Vegas Review-Journal) @KMCannonPhoto 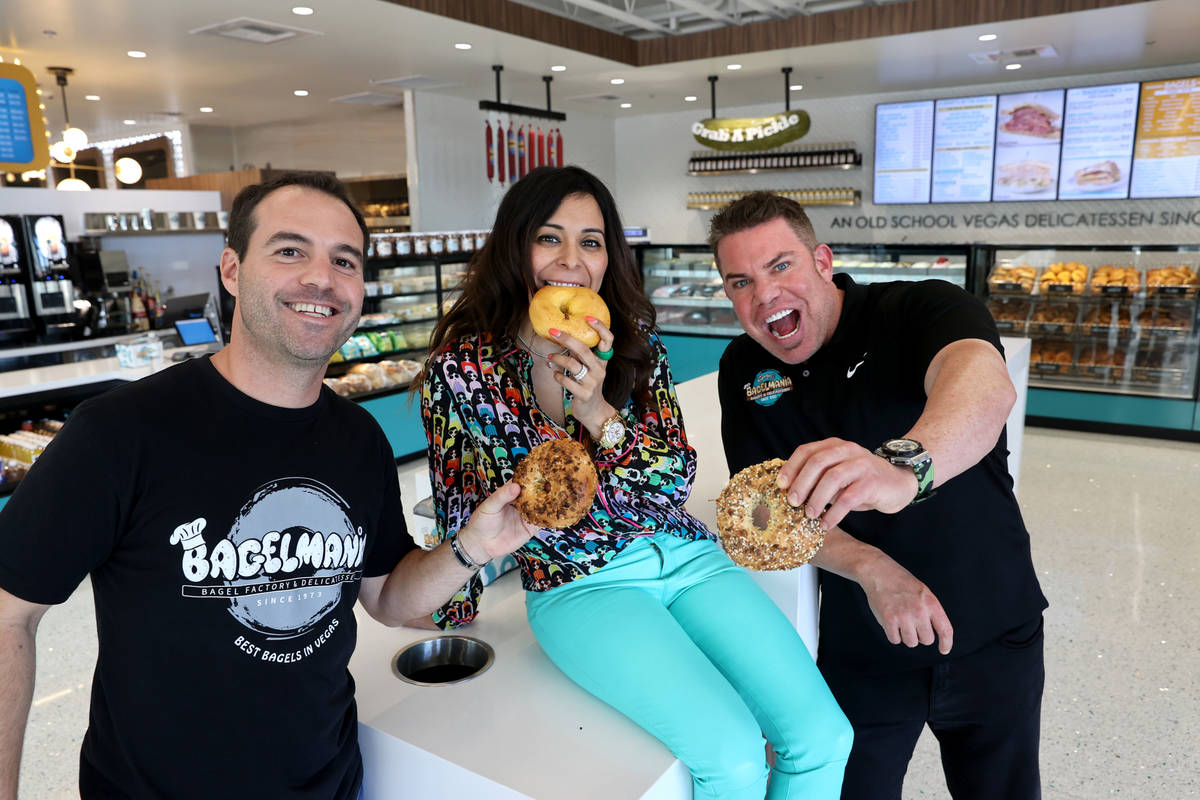 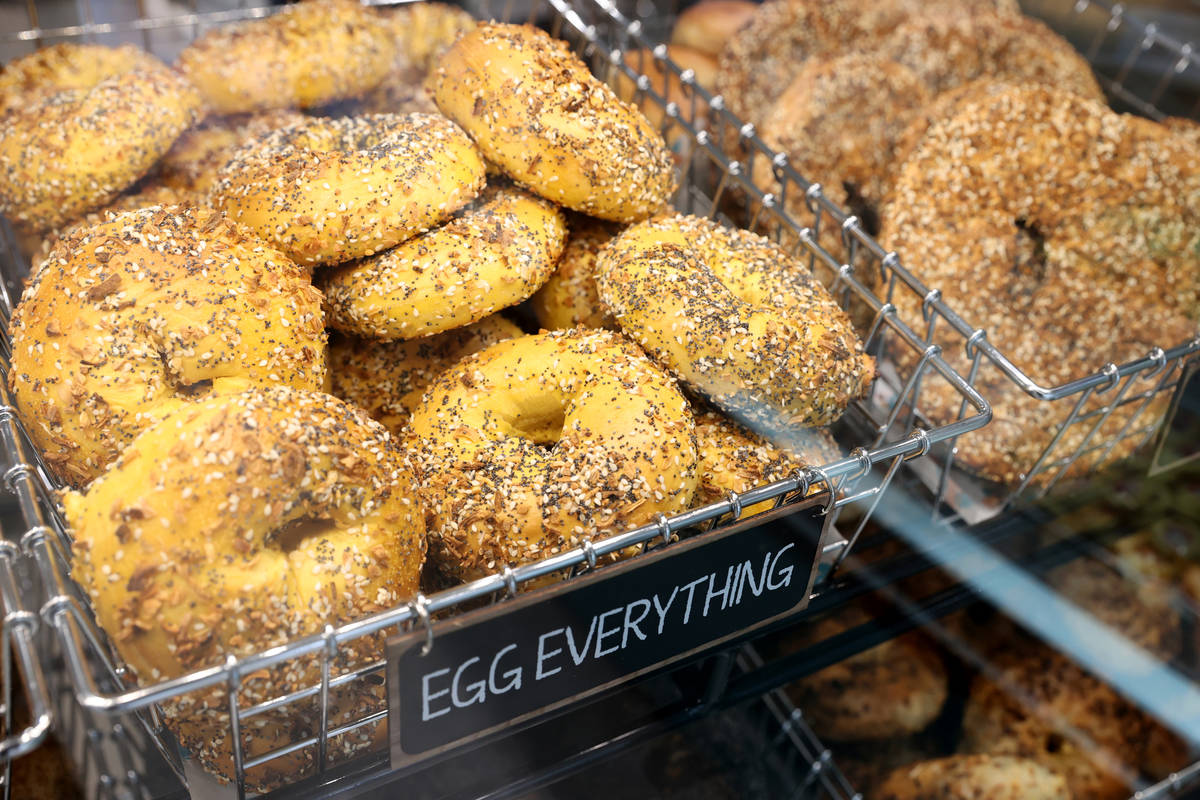 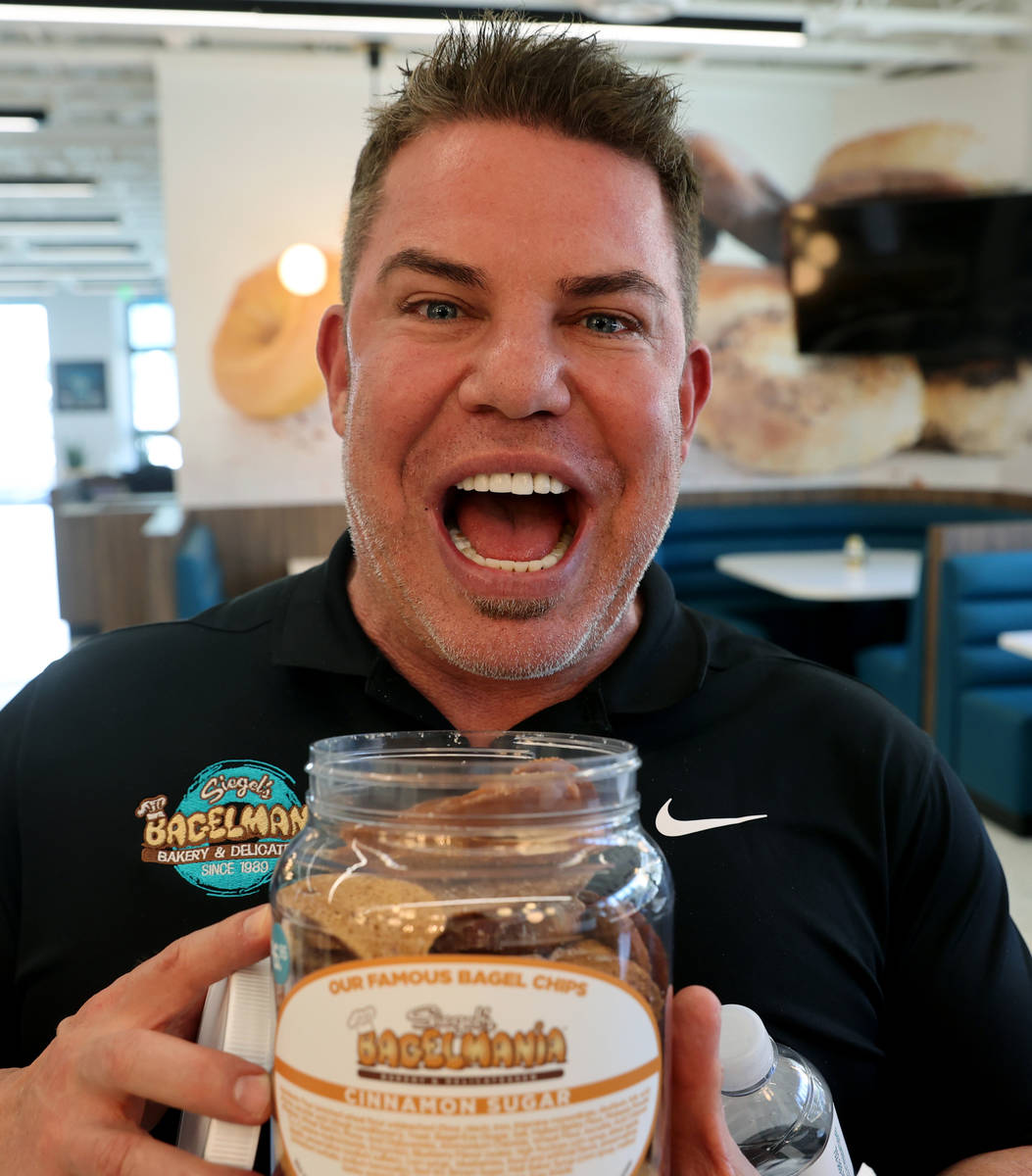 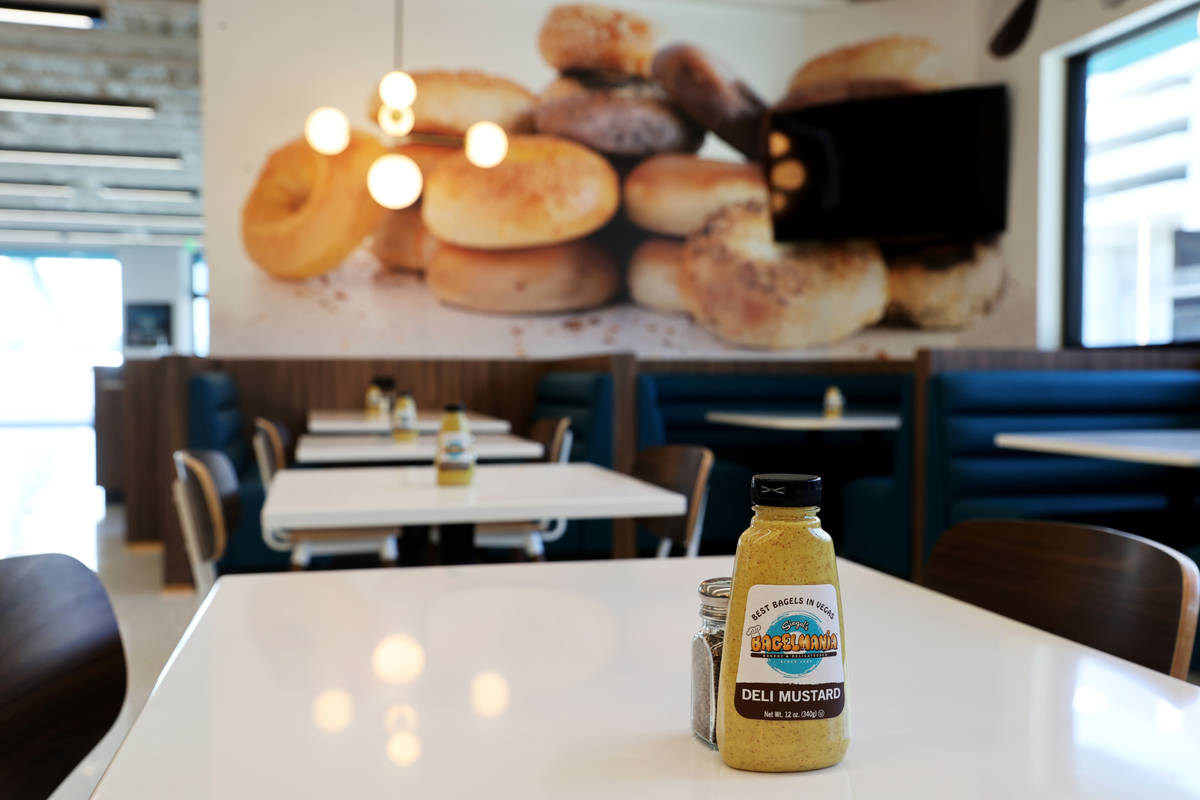 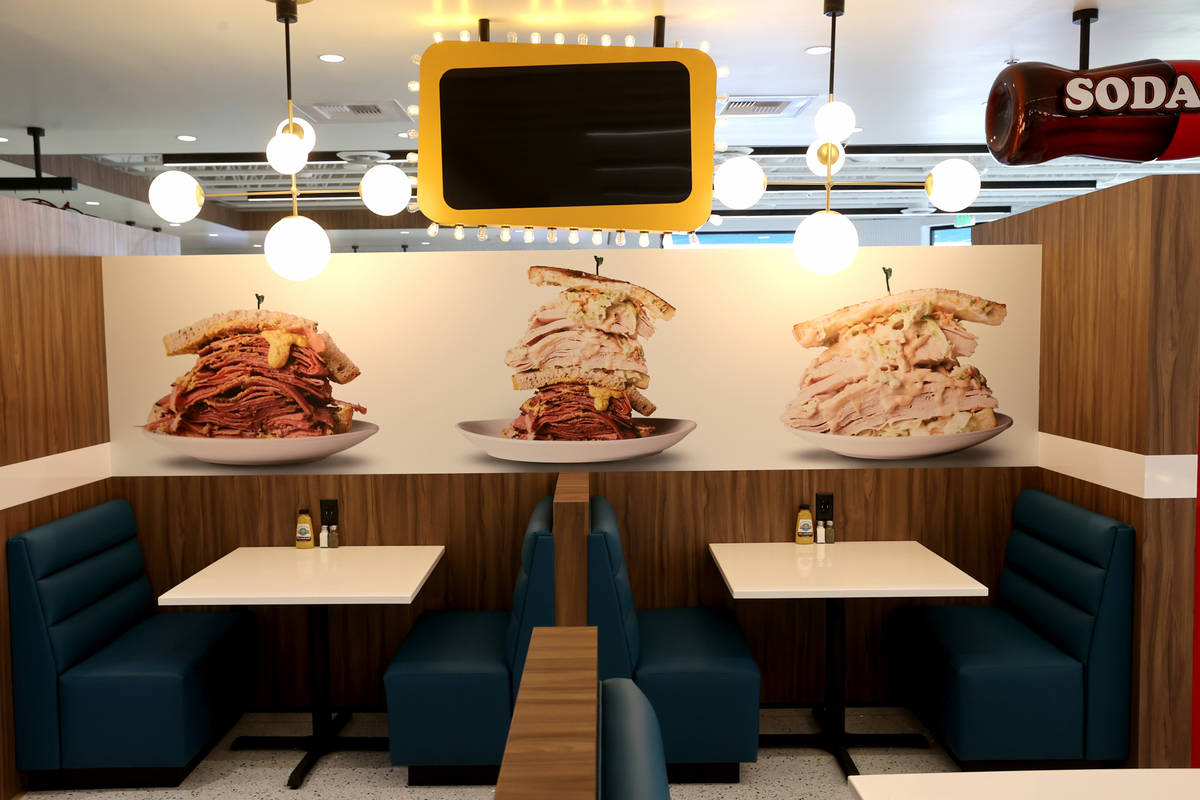 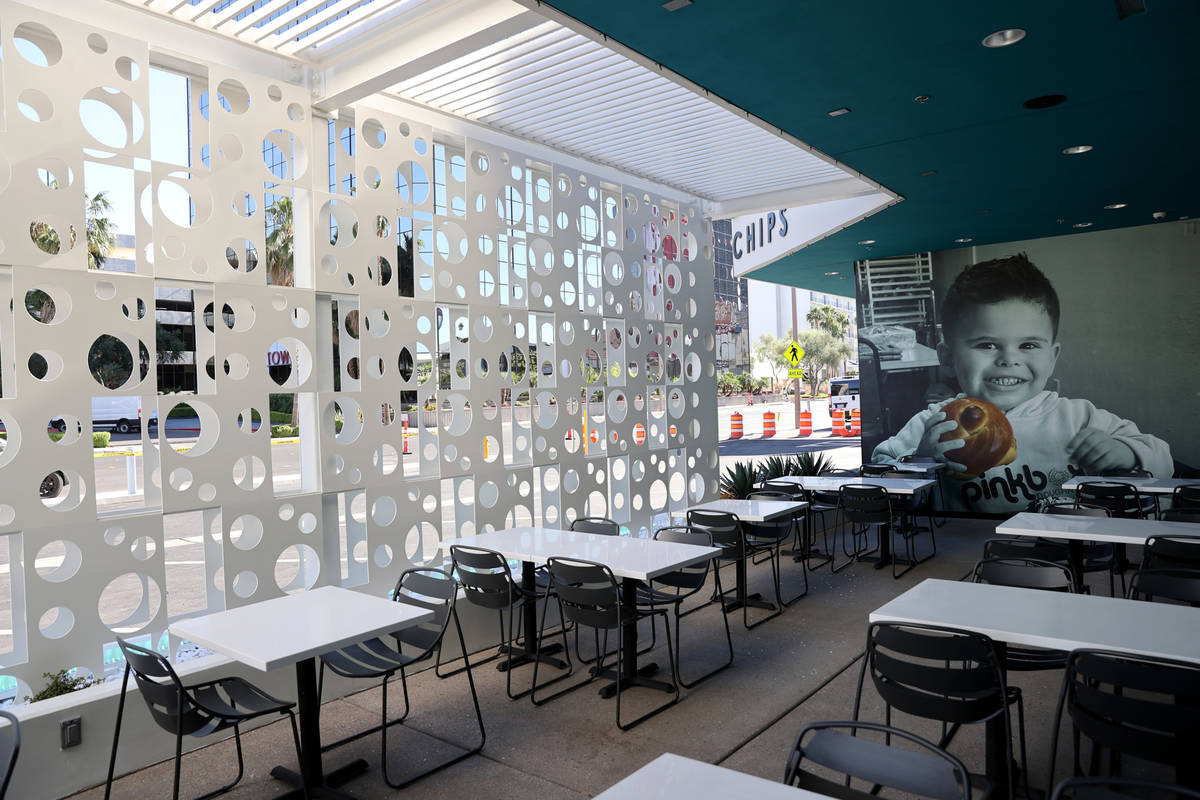 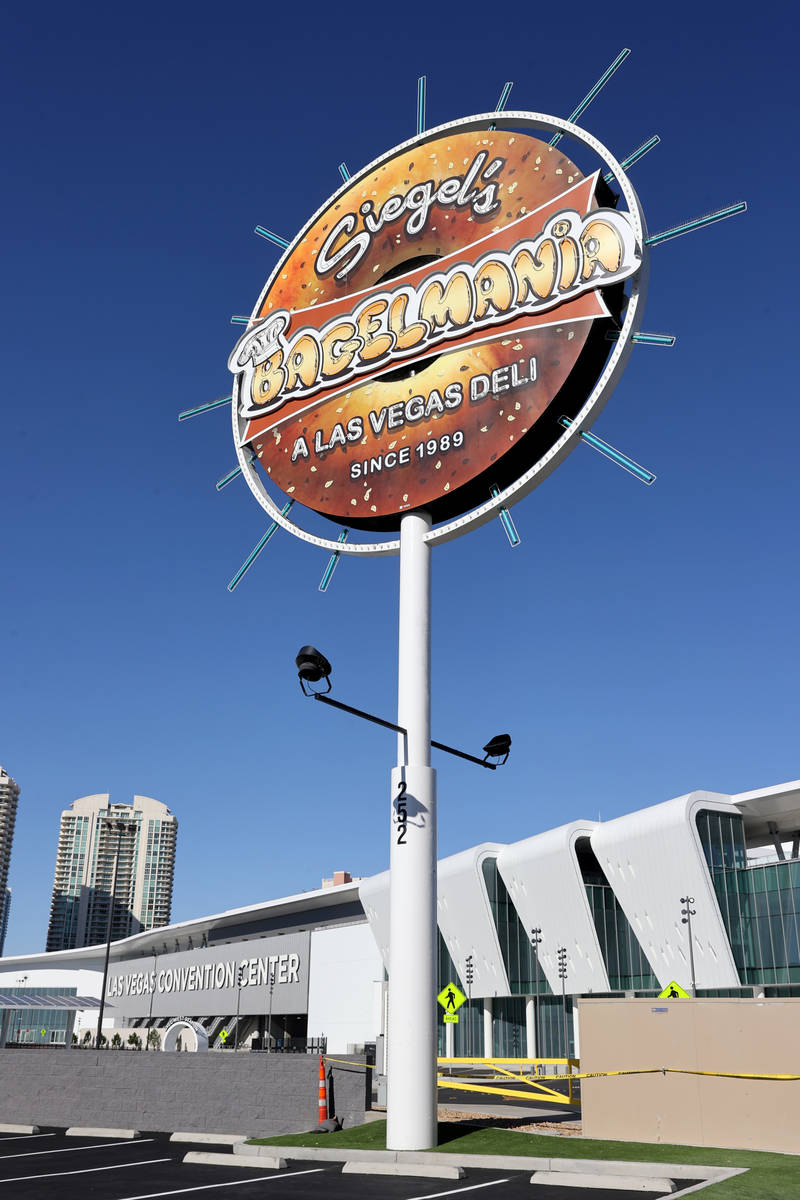 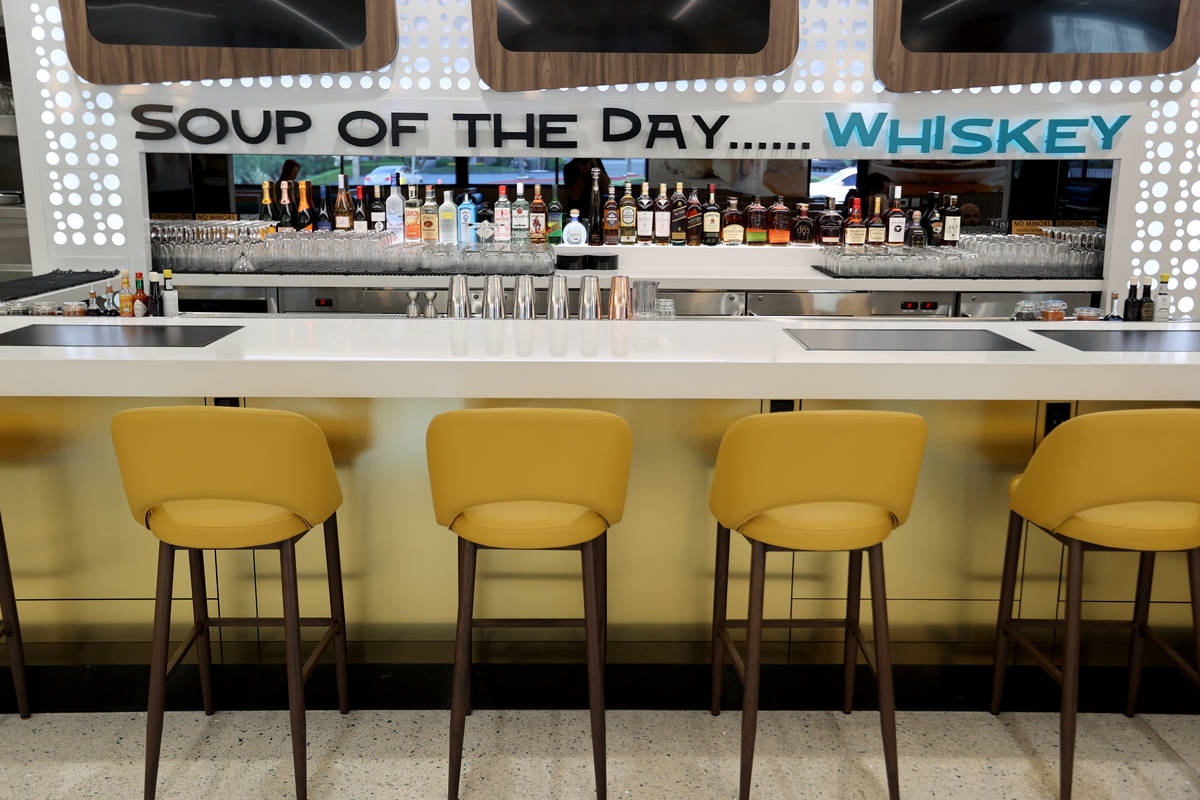 The bar at Siegel's Bagelmania on Convention Center Drive in Las Vegas Monday, May 24, 2021. The deli and eatery opens on Friday next to the West Hall expansion of the Las Vegas Convention Center. (K.M. Cannon/Las Vegas Review-Journal) @KMCannonPhoto 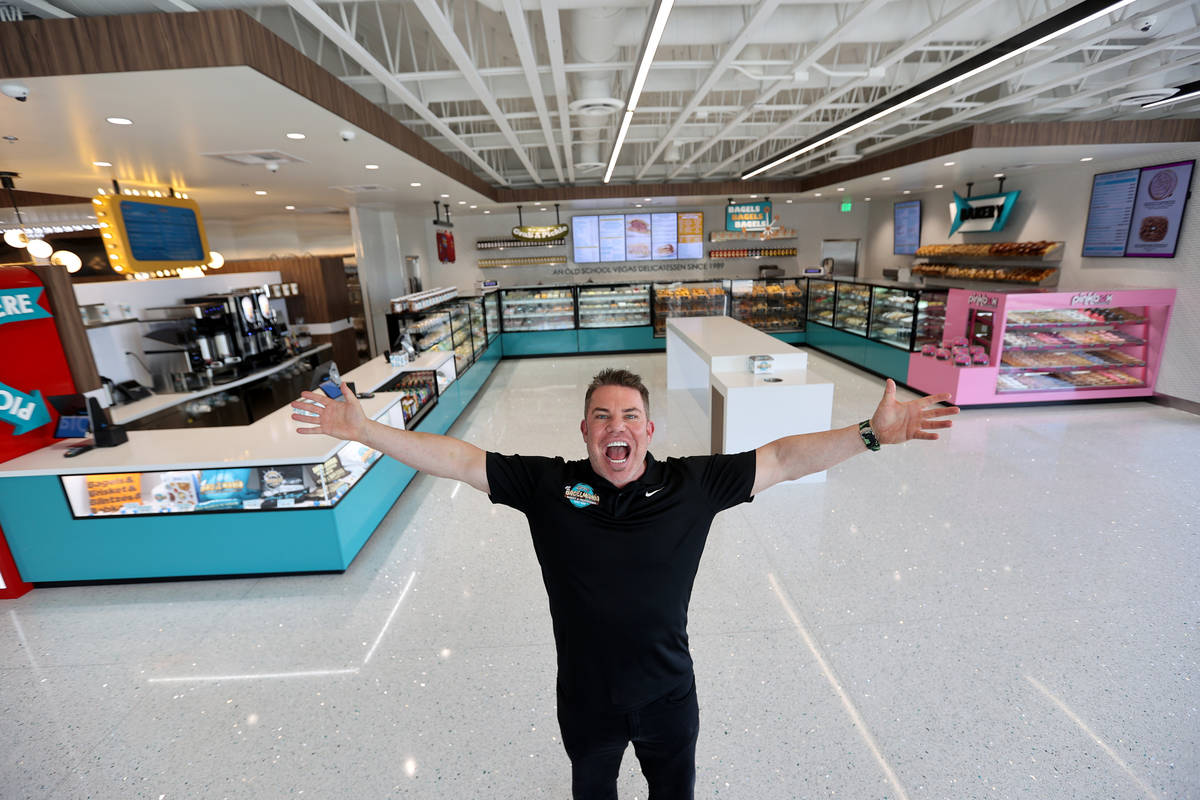 As Las Vegas continues to reopen and the sprawling West Hall convention center expansion sits like a sleeping giant, awaiting its first show in two weeks, there are signs of life in the immediate neighborhood. Siegel’s Bagelmania will open Friday at 252 Convention Center Drive.

If the “Bagelmania” name is familiar, it’s because the 10,000-square-foot space is the descendant of Harrie’s Bagelmania, a landmark on East Twain Avenue between Paradise Road and Maryland Parkway since 1989.

“All the who’s who of the Strip would go there to eat,” as well as many locals, said Michael Crandall, the company senior vice president. “That was the place to go. That tradition has stuck. They still go there to eat.”

Well, they did until Sunday, when the old Bagelmania closed to make way for the new. (There’s also a smaller version in the A gates at Terminal 1 at the airport.)

Owners Stephen and Judith Siegel bought the original in early 2018, renamed it Siegel’s Bagelmania and began tweaking the old recipes. Stephen Siegel said he was most influenced by the great delis of Los Angeles, where he grew up.

“We are a West Coast deli,” Siegel said.

And theirs may be the only Jewish deli with a sign reading “Soup of the day: whiskey,” which is over the bar.

Which is not to say Las Vegas hasn’t known its Jewish delis. One of the first may have been Foxy’s, which opened in 1955 on the northeast corner of Sahara Avenue and the Strip, later home to Holy Cow! Casino and Brewery and now Walgreens.

While most of those that have dotted the Strip over the years are gone, Greenberg’s Deli survives at New York-New York, and the suburbs are dotted with spots including Bagel Cafe to the west and Weiss in Henderson.

Freddie G’s Deli & Diner, which used to be in the Hughes Center, was owned by Freddie Glusman, owner of Piero’s Italian Cuisine on Convention Center Drive.

Glusman, who frequented the original Bagelmania dating to its early days, said he thinks the new one is “a stroke of genius. … It’s going to liven up the street a little.”

One thing Jewish delis tend to have in common is stacked-up-to-here sandwiches, which at Bagelmania include The Goodman, with hot pastrami, Swiss, cole slaw and Russian dressing, $16.95; The Mensch, grilled roast beef with melted cheddar and horseradish aioli on a toasted pretzel bagel, $16.95; and the Monte Carlo, a riff on a Monte Cristo named to honor the former Strip resort, $16.95.

Many of the dishes are named for local luminaries, such as Freddy G’s Salami and Eggs, $12.95, tagged with his ever-present admonition: “Don’t mess it up, kid.”

Plus there are Benedicts, breakfast basics, top-notch burgers for burger-lover Stephen Siegel, soups, hot and cold sandwiches, fish platters, hot dogs, pizza bagels, desserts (“Siegel Sweets”), beer, wine and cocktails including a blood mary selection, and on and on. And on.

Design elements are a mix of whimsical and historical. The private dining room is adorned with an expansive mural of the immediate area in 1964, when it was the Somerset Shopping Center. Printed memorabilia left behind in the office of Somerset developer Irving Kishner lines the men’s room, while the women’s room is decked out in retro pink tile and flamingo wallpaper.

There are 110 seats in the restaurant, with 40 more in the dining room and 40 on the patio.

Entrance is through the deli, which showcases a vast variety of house-baked breads including seeded and seedless double-baked rye, pastries, deli salads, cheese and any kind of deli meat you can imagine. Smoked fish imported from Acme in New York. Shmears in numerous flavors, with vegan and light varieties on the way. House-made ranch and Thousand Islands dressings, cherry applesauce, latkes, cole slaw and kugel. New, kosher and hot pickles. There’s a big grab-and-go selection that’ll be handy for those conventioneers.

And, of course, their own special-recipe classic boiled bagels.

Dividing the deli from the restaurant is the “soda pop” case, with brands popular in in Jewish delis, a few legacy labels and novelty flavors such as pickle.

The Siegels say they can’t choose a favorite dish, although 6-year-old son Jaxon is particularly partial to The Hulk Smash, and parental favorite Fresca is on the soda fountain.

As the Siegels also own Pinkbox Doughnuts, a Pinkbox counter with 20 to 25 rotating varieties is near the front door and the doughnuts show up atop Pretty in Pink Pancakes, $13.95, and MapleBacon Doughcro Pancakes, $13.95.

Lori Nelson-Kraft, senior vice president of communications and public affairs for the Las Vegas Convention and Visitors Authority, said the original Bagelmania had been a staple lunch spot for the staff because of its proximity to the convention center, and that they’ll frequent the new one.

“The staff there really has that Jewish-deli customer service, of bantering with the customers, tossing in that free rugelach when you have a sizable order,” she said. “They’re loud and fun and they remember your order. From a local standpoint, it’s a great addition.”