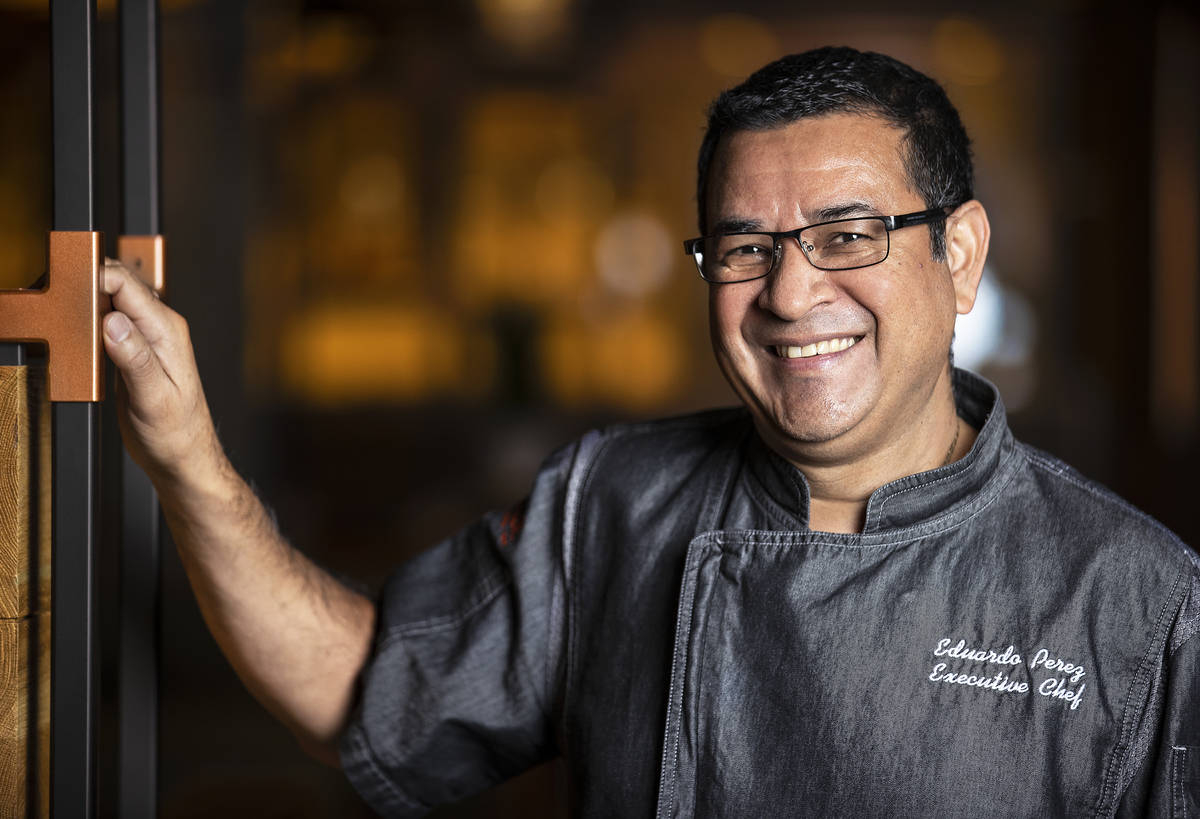 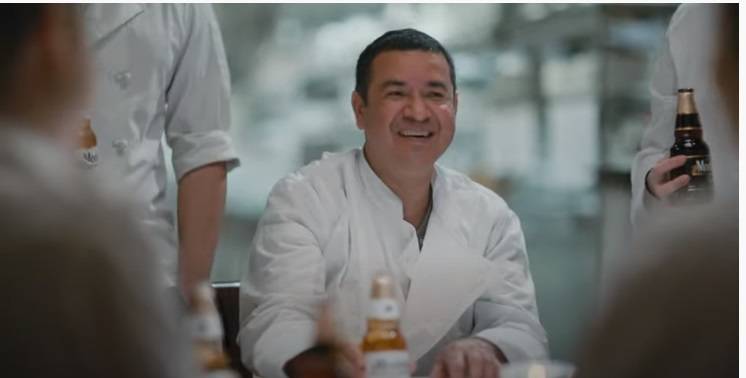 Chef Eduardo Perez in a screengrab from the Modelo commercial. (Modelo) 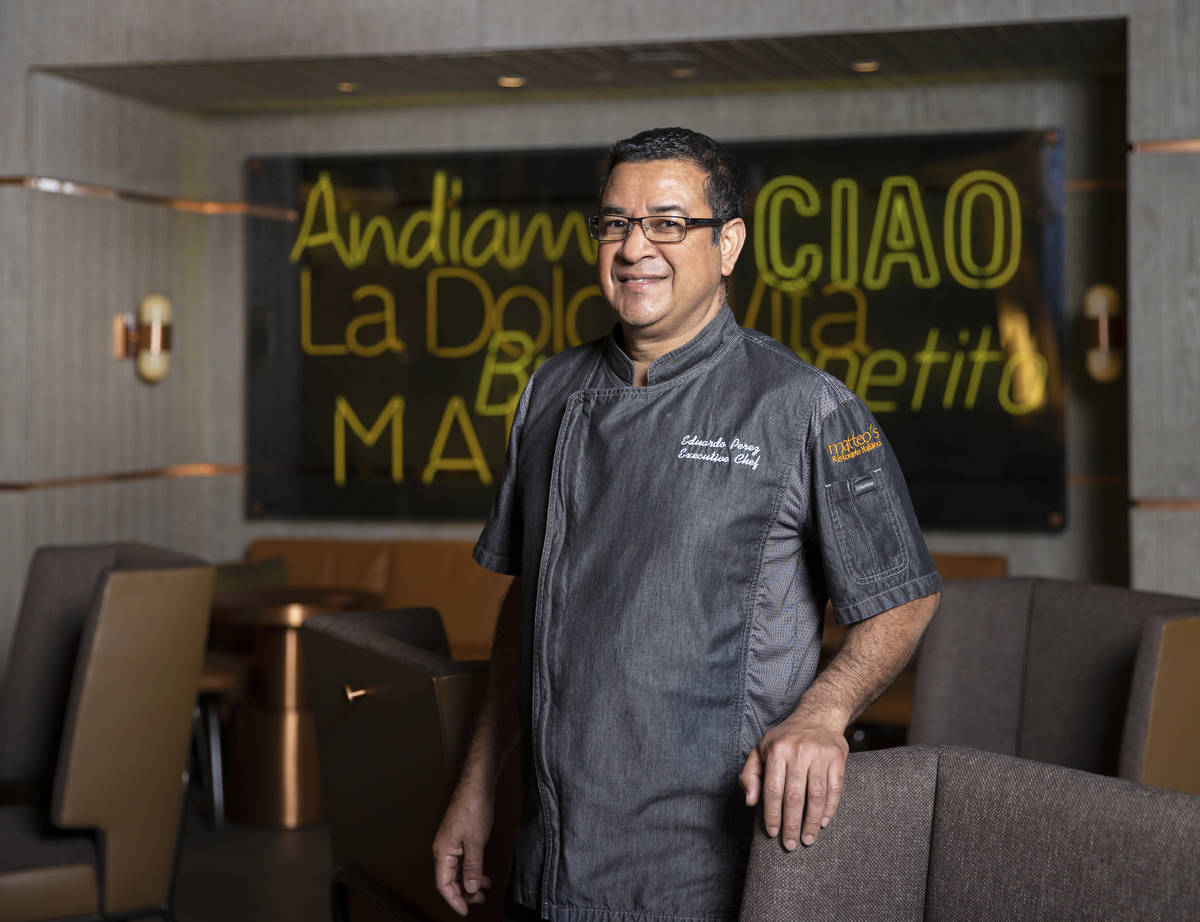 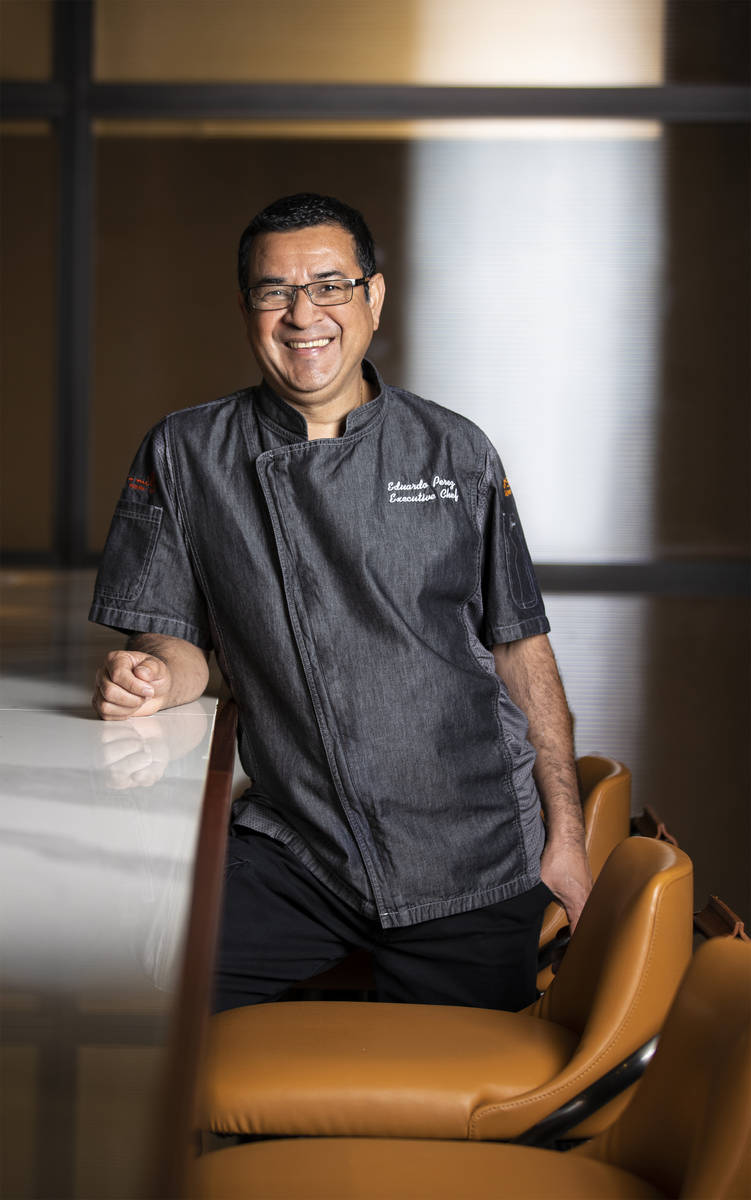 If you happen to be taking in a football game or two on TV this weekend, keep your eyes peeled for a commercial for Modelo Especial and Negra beers, which spotlights executive chef Eduardo Perez. While the commercial doesn’t say it, he’s a Las Vegan and leads the kitchen at Matteo’s Ristorante Italiano at The Venetian.

Perez isn’t an actor or a model; the man doesn’t even have an agent. So how did he end up on national TV, on a commercial for an international company?

“They found me,” Perez said. “One day I got a message from this talent company in Chicago: ‘They want to use your story.’ ”

He doesn’t know how they heard about his story, but it’s a compelling one. And it’s even more compelling than what’s recounted in the commercial, “The Fighting Spirit of Eduardo Perez,” which will run through March.

In 1986, at age 18, Perez left his native Guatemala to come to the U.S. His first job was at Spago in Beverly Hills, California. The commercial says he started as a dishwasher, but those who know Perez’s story will tell you he actually started as a gardener.

“I guess I didn’t tell them the first part of my story,” he said of the talent company.

From garden to chef

Working as a gardener led directly to his career as a chef.

“I got to meet all the people who worked in the restaurant during the time I was taking care of the herbs outside,” Perez said. “Sometimes, the chef would stop by and say, ‘Do you have this herb that I need for a special?’ And I had it.

Not only did they know who he was, they realized that he had the ambition and enthusiasm to succeed.

Wolfgang Puck’s organization has a practice of moving people around his restaurants as they climb the ladder. One of the cooks who remembered Perez from the garden returned to Spago as executive chef.

“He asked me if I wanted to do pizzas. I said, ‘Sure.’ He said, ‘You’re going to be making pizzas for the next two years.’ I thought he was joking, but he was not.”

But Perez had his sights set higher. When the executive chef moved on and the executive sous chef moved up, he asked Perez what he wanted to do. Pasta, he said. Before that, the chef told him, he’d need to work the pantry station, making appetizers and salads. He eventually was moved to pasta.

“For a long, long time,” Perez said with a laugh. “They didn’t want to take me off of it.”

The company sent him to help open a restaurant in Malibu, California, in the early ’90s. He remembers the chef telling him he wanted Perez to stay and asking him what he wanted to do.

“I wanted to keep learning,” he said. “I had the cooking side, but I wanted to learn the administrative side of the business. Back at Spago, the chef was promising me the same thing.”

But Spago was a shorter commute, so back he went, only to get stuck on the pasta station. And then the executive chef changed again.

“One Sunday we were playing around, and I said, ‘How about if you work pasta and I work the grill?’ ” he remembers. “Working the grill, you were in charge of the whole line, you’re running the show. It was a big deal. He looked at me and said, ‘OK, let’s do it.’ From then on, he worked pasta and I worked the grill. Wolfgang would walk in and say, ‘Eduardo, is Joseph doing OK on pasta?’ just kidding around.”

But he reached the point where he’d learned all he could at Spago, so he took a job at the Coyote Cafe that was going to open at the new MGM Grand. Wolfgang Puck found out and offered him a position at his cafe at the same resort.

“I was the sous chef, but I was running the restaurant,” Perez said. “The executive chef was busy opening new Wolfgang restaurants.”

Perez went to help with the opening of Spago in Mexico, then David Robins, who’s now a managing partner for operations and the company’s corporate chef in Las Vegas, brought him to Spago at the Forum Shops at Caesars. He spent seven years there. “I learned so much from David and the crew.” Eventually, he was named executive chef at Puck’s Lupo at Mandalay Bay.

But his kids were grown, and after a few years, Perez had learned all he could there. It was time to move on, to become executive chef of Smith & Wollensky in Miami.

“That was another big job,” he said. “Just doing crazy numbers, a lot of volume. Crazy, crazy busy.”

And then Matteo Ferdinandi, whom he knew from the Puck organization, came calling, wanting Perez to work at the Las Vegas restaurant that would be an offshoot of his Factory Kitchen in Los Angeles. Three times Ferdinandi flew to Miami.

“I knew at Smith & Wollensky there was the opportunity for growth, but it would take a lot longer than with Matteo,” Perez said. So he left Miami, spent six months training with Factory Kitchen executive chef Angelo Auriana, and opened the Las Vegas restaurant at The Venetian in December 2018 (the name was later changed to the more descriptive Matteo’s Ristorante Italiano).

“Matteo’s is more of a restaurant where we can apply what we’ve learned, have ideas to share with chef Angelo,” Perez said. “We can come up with new dishes, execute them properly, offering our clients something different every time. I have the freedom to create and to teach.”

And through the commercial, he’s sharing a little of his immigrant experience.