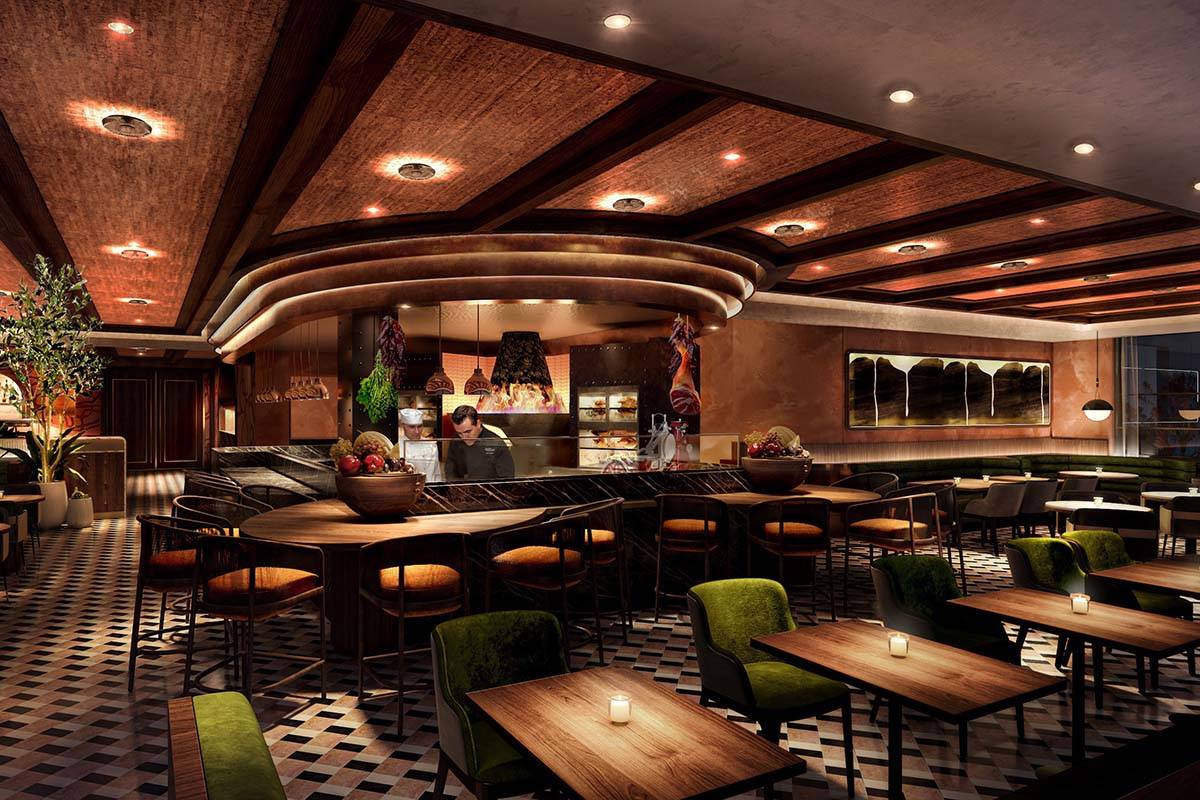 A rendering of the dining room at Olives. (Virgin Hotels Las Vegas) 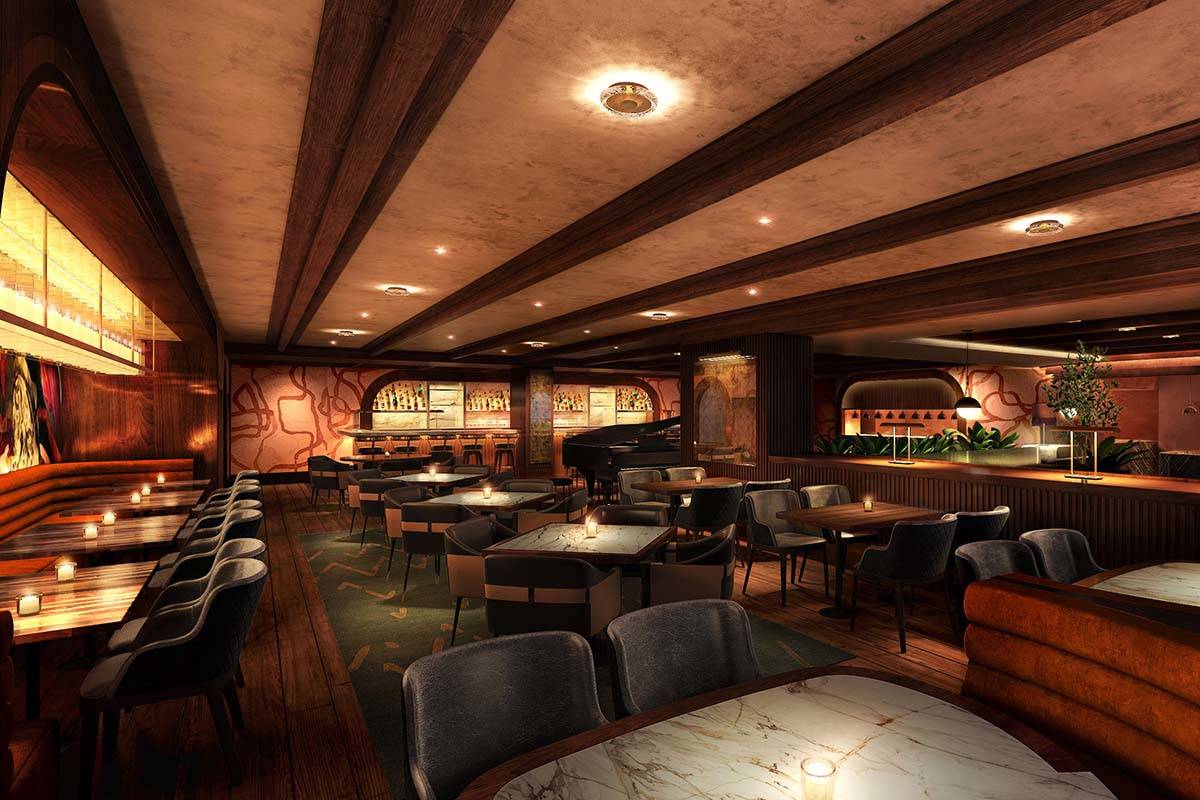 A rendering of the lounge area at Olives. (Virgin Hotels Las Vegas) 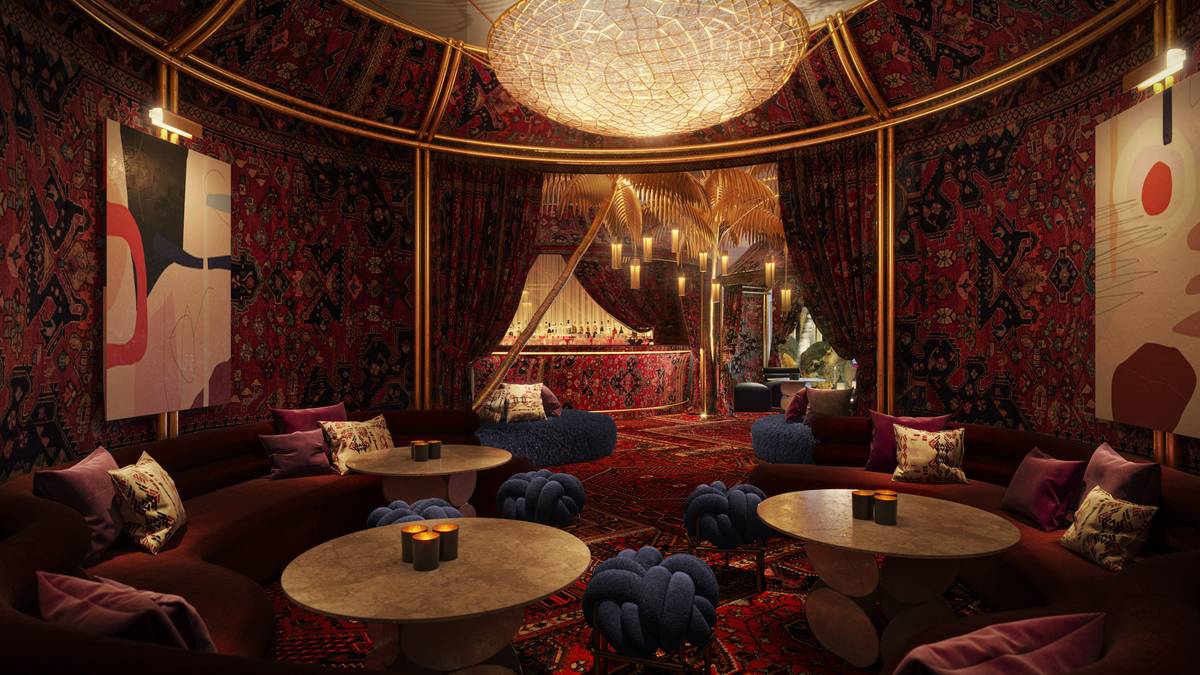 A rendering of the Shag Room, part of the Commons Club area of the hotel. (Virgin Hotels Las Vegas) 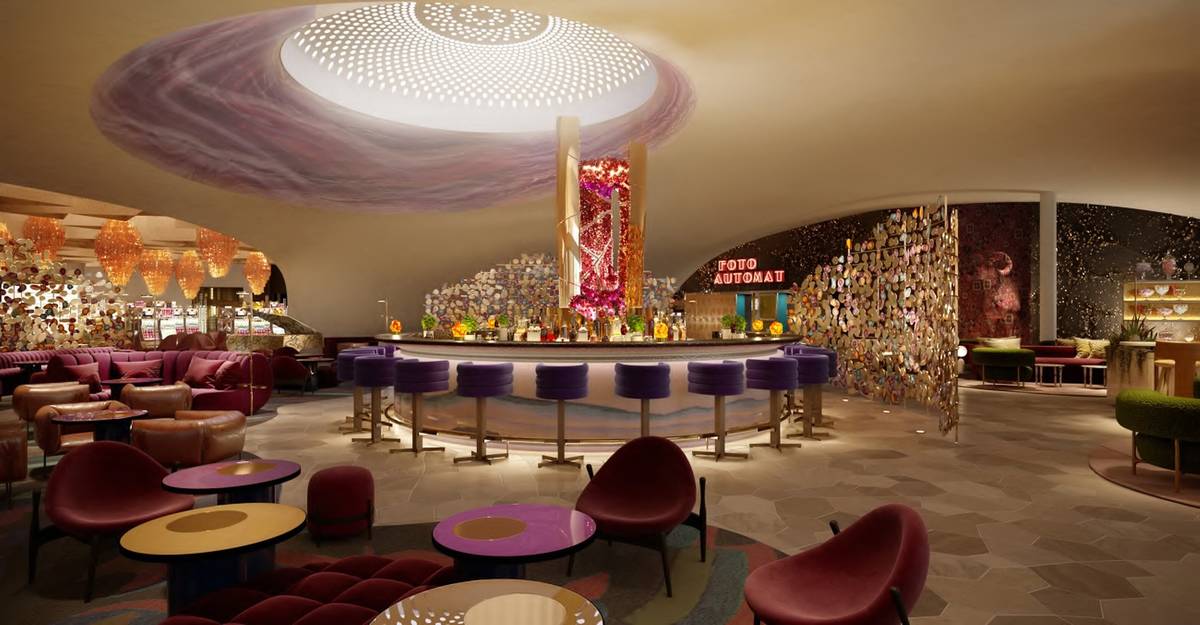 A rendering of The Bar at Commons Club. (Virgin Hotels Las Vegas)

The new Virgin Hotels Las Vegas, tentatively scheduled to open in November, will offer a taste of the old and the new — literally.

Among their restaurant portfolio, the developers of the project that will replace the Hard Rock Hotel are bringing back the best of that property’s restaurants in the form of Nobu, which opened with the resort in 1995, and MB Steak, a newer addition that had built a strong following.

The new hotel, for which a final opening date is to be announced around the middle of this month, also will share in the return to Las Vegas of multiple James Beard Award-winning chef Todd English. English’s Olives opened with the Bellagio in 1998 and was a prominent presence there until it was replaced by the relocation of Spago two decades later.

In a March interview, English said the new Olives will very much evoke the old one.

“It’s a next-generation Olives,” he said. “I always like to say 2.0. In the vein of Mediterranean, I’m going to definitely keep that. I think what most people want is a lot of interesting, fun ideas. It will be some of the stuff I’m known for and have done in Vegas for 20 years. Beef carpaccio — we used to sell 150 a day.”

But the new Olives won’t be all about meat; English said it will be “very much plant-based-friendly, which Mediterranean food is.”

English said it’s important to him to attract locals.

“Back before online reservations, if you had a local number, we would make sure you had a table,” he said. “I think that’s something that’s important. Where we’re situated in the casino, it’s easy to get to us as well.”

English said he plans to have a residence here and is excited about returning to Las Vegas. (He also is planning a food market/hall at Area15, scheduled to open this month.)

Richard “Boz” Bosworth, president and CEO of Virgin Hotels Las Vegas, said English was a natural choice for the property.

“I’ve been a consumer fan of Todd and Olives dating back to 1999 in Charlestown, Mass.,” Bosworth said. “Of course, being a resident of Las Vegas for a number of years now, I used to frequently go to Olives at Bellagio as well as Todd English P.U.B.,” which was at The Shops at Crystals but has closed.

“We had an extraordinary interest in bringing Todd into the fold,” he said. “He’s a great partner — everything we want in a culinarian.”

Bosworth said English also had assisted with attracting some of the resort’s other restaurant partners.

Besides Olives, Nobu and MB Steak, they are:

Night + Market from Los Angeles, which has a stated mission of “delicious Thai food to facilitate drinking and fun-having amongst friends.” It recently was a James Beard nominee for best wine program.

Kassi Beach Club from Nick Mathers, creator of Elephante in Santa Monica and Kassi Club in Los Angeles. The poolside restaurant and ultralounge promises “coastal Italian flavors with a spirit of the Mediterranean.”

Casa Calavera from Hakkasan Group, with traditional Mexican cuisine amid “a relaxed open-air, feet-in-the-sand experience” for dining and an energetic “pre-party” nightlife atmosphere.

Money, Baby! from industry veteran Justin Massei will have indoor and outdoor patios with sports betting and interactive games

There also will be a Commons Club, a signature feature of each Virgin Hotels property. It will have The Kitchen at Commons Club, serving breakfast through late night, including dishes that reflects Virgin’s British roots; The Bar at Commons Club; The Shag Room, with social events and some live entertainment; and the Funny Library Coffee Shop, complete with communal workspace.