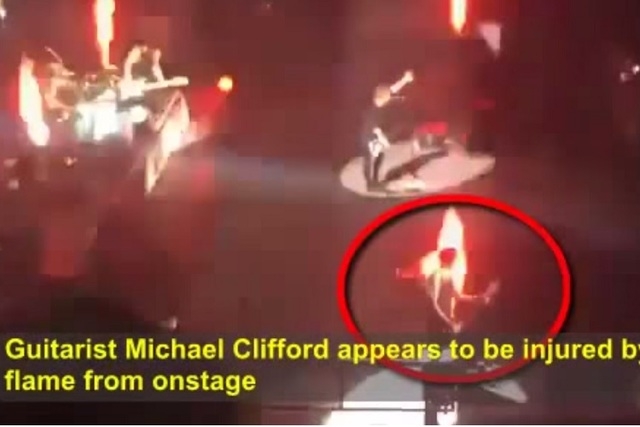 LOS ANGELES — Aussie boy band 5 Seconds of Summer had to cut its Saturday show in London short after its guitarist, Michael Clifford, suffered burns to the face in an onstage pyrotechnics accident.

The mishap occurred while the band was playing its hit “She Looks So Perfect” in its second night at the Wembley Arena in London. In videos uploaded to social media by fans, Clifford can be seen accidentally walking into a pyrotechnics display, lighting his hair on fire. He then rushed off the stage, fanning away smoke with a towel.

Clifford’s bandmate Ashton Irwin then told fans that they would not be continuing with the show.

“Michael has hurt himself so we will not be continuing the show right now,” Irwin said. “Just want to say thank you so much for coming. He is okay.”

Concerned fans quickly made #GetWellSoonMichael a trending topic on Twitter, but Clifford took to social media later that night to reassure fans that he was fine, posting a selfie with bandages covering the burned side of his face.

5 Seconds of Summer members Calum Hood and Luke Hemmings also tweeted about the incident, with Hood calling Clifford “a trooper” and Hemmings saying the guitarist is “in good spirits.”

A spokesperson for the band confirmed that Clifford has been given the “all clear” by doctors, and will play Sunday night. There will, however, be no pyrotechnics during Sunday’s show.

“Michael is recovering well after being given the all clear by doctors,” said a statement from the spokesperson. “He will join the band on stage tonight at the SSE Arena for their third and final London show. Michael and the band would like to thank all the fans, well wishers and particularly last night’s audience for their support. There will be no pyrotechnic production for the show this evening.”