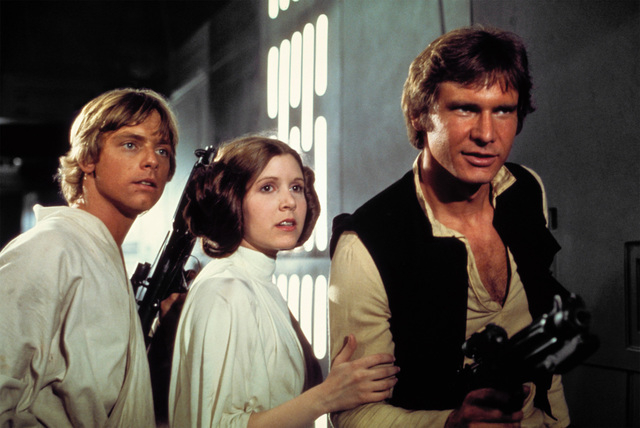 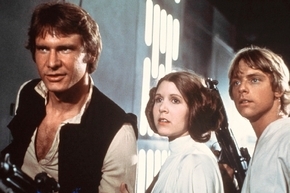 This publicity film image provided by 20th Century-Fox Film Corporation shows, from left, Harrison Ford as Han Solo, Carrie Fisher as Princess Leia Organa and Mark Hamill as Luke Skywalker in a scene from the Star Wars movie released by 20th Century-Fox in 1977. The classic Star Wars film that launched a science fiction empire is being dubbed in the Navajo language, with casting calls scheduled Monday in Burbank, Calif., and on May 3 and 4 at the Navajo Nation Museum in Window Rock.

With his roguish charm, the gallant scoundrel Han Solo has long been one of the favorite characters in the “Star Wars” universe.

Now fans will finally get to learn the smuggler-turned-hero’s backstory.

Disney announced Tuesday that Christopher Miller and Phil Lord, the duo behind “The Lego Movie,” will direct a feature about Han Solo’s life before “Star Wars,” slated to hit theaters in 2018.

The as-yet untitled movie will be written by Lawrence Kasdan and his son, Jon Kasdan. That screenwriting duo will probably satisfy the legions of devout “Star Wars” fans — the elder Kasdan co-wrote “The Empire Strikes Back” and “Return of the Jedi,” in addition to J.J. Abrams’ upcoming “Star Wars: The Force Awakens,” due in December.

No casting was announced, although social media speculation immediately centered on Chris Pratt, the ascendant star of “Guardians of the Galaxy” and “Jurassic World.”

“Folks, let’s be honest: Chris Pratt isn’t just the best person to play Han Solo; he IS Han Solo. There is Chris Pratt … and everyone else,” tweeted blogger Charles Clymer.

Other fans were more ambivalent.

“I really don’t know how I feel about this. No one can be Han Solo except Harrison Ford,” said Casey Calvert on Twitter.

Disney said the movie’s story will explore how young Han Solo became the smuggler and thief whom Luke Skywalker and Obi-Wan Kenobi first encountered in the cantina at Mos Eisley.

“This is the first film we’ve worked on that seems like a good idea to begin with,” said Miller and Lord in a statement released by Disney. “We promise to take risks, to give the audience a fresh experience, and we pledge ourselves to be faithful stewards of these characters who mean so much to us.”

The movie will be produced by Kathleen Kennedy, whose list of credits include “E.T.,” “Jurassic Park” and “Star Wars: The Force Awakens.”

“The Lego Movie” was a critical and commercial hit, earning more than $468 million worldwide at the box office.