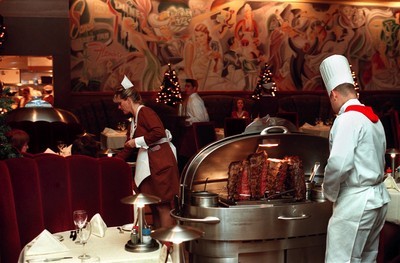 Heidi’s Picks is a weekly selection of restaurant suggestions from Review-Journal critic Heidi Knapp Rinella. Her reviews are done anonymously at Review-Journal expense.

Firefly isn’t the only tapas restaurant in Las Vegas — and the others are praiseworthy — but it brought the old Spanish tradition here and continues to do it proud, not only with traditional tapas dishes but also those that borrow from other cuisines and cultures. Among the best are Serrano ham and Manchego cheese, tortilla Espanola, albondigas, Firefly fries, stuffed dates, eggplant cannelloni and, for dessert, banana-Nutella sandwiches with Nutella dipping sauce. (11/20/08)

That sauces are the secret to the top-notch food at Galerias Gourmet became clear almost immediately upon seating, when we were served two smooth salsas and an herbed cheese to go with the requisite chips. Also worthy of note: Queso Fundido with cactus strips; an avocado stuffed with shrimp, mushrooms and Oaxaca cheese; the Salvador Dali, which was pork tenderloin with an exquisite sauce based on guava, rose petals and herbs; and the Francisco Toledo, chicken with a pineapple-coconut sauce with onions and jalapeno. (6/20/08)

Lawry’s the Prime Rib has a limited menu — mostly prime rib cut at the table by a guy pushing a domed silver cart, with a couple of seafood selections and a ribeye steak tossed in — but maybe it’s just that stick-to-what-you-know philosophy that had made the company so consistently reliable for 70 years. We love the prime rib (both the California cut and the slightly larger Lawry cut) and also the crisp-crusted sourdough bread, Spinning Bowl Salad, mashed potatoes, creamed corn and lovely Yorkshire pudding. (11/20/08)

Chef Marcus Ritz’s former Marc’s may have fallen into oblivion but he sure hasn’t, rising quite nicely with Mezzo. Ritz’s personality is a big part of the appeal — he comes out and talks to each party whenever possible — but no more so than his food, which on the evening of our visit included an excellent salad of roasted beets with Gorgonzola and candied walnuts, starter of meatballs (although the promised pizza strips were forgotten), gnocchi and eggplant Parmesan. And the prices — including the wines — are reasonable. (8/15/08)