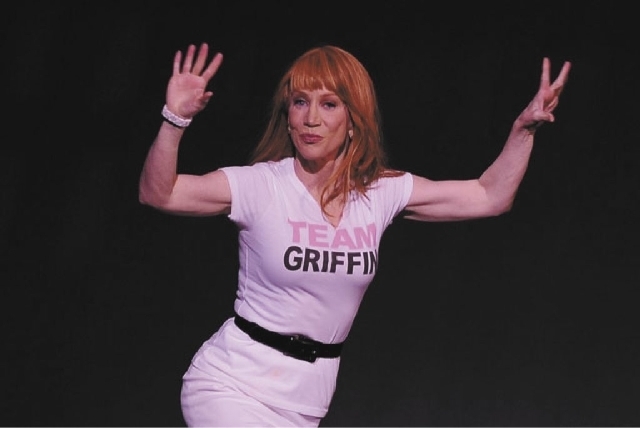 Kathy Griffin, who will perform Friday at The Mirage, says she is upset women were once again passed over to host late-night talk shows. (Courtesy)

Kathy Griffin will record her next comedy album, “Kathy Griffin: Live from Las Vegas,” on Saturday at The Mirage. She gave me that news, in between putting clown noses on Britney Spears, Celine Dion and Bruce Jenner.

“You haven’t seen Britney here, have you?” I said.

“Every time I play The Mirage is her weekend off. What is she, on welfare? Is she working or not?” Griffin said.

Griffin asked me for inside information. I told her I know a disappointed front-row Spears fan who joked to me that Spears even lip-syncs the part where she says, “Hello, Vegas.”

“I remember one year, she opened the Billboard Awards to the backdrop of the Bellagio fountains, and I think she thought she was in Niagara Falls,” Griffin said.

“She’s no Celine,” Griffin said. “Celine is still at her birth weight.”

I asked Griffin what she wants people to know about her show Saturday.

“I’m actually taping it, making an audio recording, because as the current Grammy winner for best comedy album, I have the nerve to try to get my seventh consecutive Grammy nomination for comedy album,” she said. “ ‘Kathy Griffin: Live from Las Vegas.’ ”

The nice thing about an audio special is she can be more uncensored than in TV specials, she said.

Griffin was referring to my two recent interviews with the perfectly nice sister and father of Britney, in which we discussed our shared Louisiana roots and Daddy Spears’ barbecue grill.

“I know your game, Doug,” Griffin said. “You manipulated them with your Southern roots to get information out of that poor Jamie Lynn, as if she hasn’t been through enough.

“Can you confirm Jamie Lynn Spears was at least drunk on the phone call, or did she speak in tongues? I know they’re very religious,” Griffin said.

“She’s the most well-spoken of the Spears,” I said.

“My Emmy is more important to me than people or organs,” she said.

Then, since Griffin lacks an attention span, suddenly we were talking about the family that rhymes with “CarTrashians.”

“ ‘Keeping Up With the Kardashians’ this year has accidentally turned into a reality show,” Griffin said. “It’s obviously what they call a ‘soft-scripted’ show. But this year, they bit off a little more than they could chew.”

“You’re totally right,” I said. “It finally did turn into a real show, because Bruce Jenner went ‘all female,’ ” I joked.

“Maybe the ‘B’ in LGBT is Bruce,” I joked, and I hereby apologize to everyone for that insensitive joke.

“He’s got the gold medals, he might as well get one of the letters,” Griffin said.

I asked Griffin for final thoughts about her Las Vegas show.

“Put the kids to bed,” she said. “I never cease to be amazed at how many families think it’s a really good idea to, as a family, take a nice stroll down the Strip with the kids in a double-sided stroller at 2 a.m.”

“It would be cool if you could bring Anderson Cooper,” I said of her best friend, “and he could push you around in a stroller on the Strip. I think that’s your show.”

“Anderson knows I can’t wait for my first Rascal (mobility scooter). And what better town to break it in,” Griffin said.

“Trust me, I would love nothing more than to go on stage on a Rascal with an oxygen tank, a colostomy bag, and maybe have a walker off to the side with the tennis balls on the legs, because that’s the way to do Vegas in August — just as little mobility as possible.”

Just a reminder from Norm Clarke’s column: You can see the real Grumpy Cat, who has inspired an Internet of memes, at 6 p.m. today at The Linq’s Kitson shop for, yes, a book tour stop.