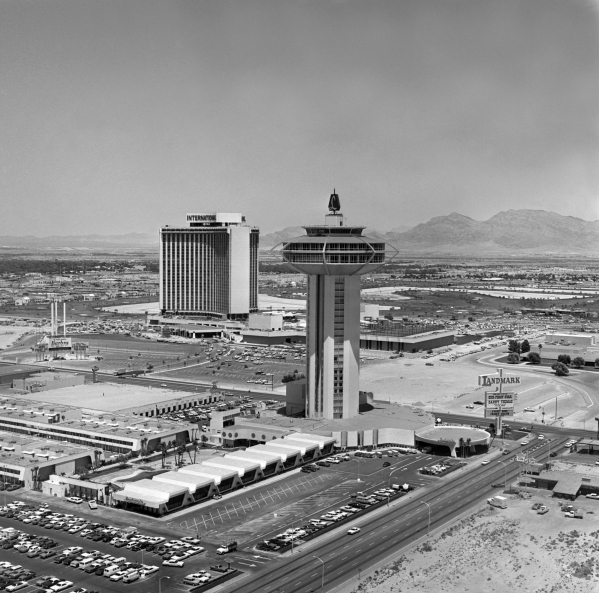 Lorraine Hunt Bono sang at the opening of Howard Hughes‘ Landmark Tower hotel in 1969 and fought for its preservation.

On the 20th anniversary of its implosion, she still believes the demolition on Nov. 7, 1995 was a mistake.

The 346-foot tower inspired by Seattle’s Space Needle “was iconic and part of the history of Las Vegas. Had they kept it, it could have been the office for the Las Vegas Convention and Visitors Authority,” said Hunt Bono, owner of Bootlegger Bistro.

But she was on the losing end of the votes. “Only two other (LVCVA board members) stood with me to save it — Marilyn Gubler and Paul Christensen.”

Then known as Lorraine Hunt, she had second thoughts when she was selected, as a county commissioner and a LVCVA board member, to be among a trio that would press buttons to trigger the implosion.

“But I was there for the opening and I thought I should be part of the ending. So technically I opened and closed the Landmark,” she said.

“My husband (radio show host Dennis Bono) introduces me as the singing Unibomber.”

Her quartet, the Lauri Perry 4, performed in the Skyroom at the top of the Landmark on opening night, July 1, 1969.

The highlight of the evening was when a mysterious helicopter hovered outside the tower.

She was singing “Satin Doll” when a bright light from the helicopter shined into the windows “all the way around,” she recalled.

Sensing panic among some patrons, she did what she was taught. “Having grown up in the restaurant business I was taught to calm people down.”

She told the crowd, “As you know, Howard Hughes owns this hotel and he’s a very bashful man so why don’t we go to the windows and wave at him.

“As they waved, the helicopter turns around and zooms away,” she said.

“A security guard comes up to me and says, ‘How did you know that was him?'”

It was never verified, she said, by the ultra-private billionaire who owned a half dozen hotel-casinos, but she’s not alone in thinking Hughes just wanted to check out the party.

Jack Jones, Paige O’Hara and Clint Holmes are among the pro talents teaming with gifted students for Monday’s “Experience the Arts … Dream!” benefit for Las Vegas Academy. O’Hara, best known as the voice of Belle in “Beauty and the Beast,” will perform a Disney medley backed by a student orchestra. The benefit starts at 5:30 p.m. Monday in the Rio’s Pavillion Ballroom. Ticket information: 702-799-7800.

Nov. 8, 2002: IBF super middleweight champ Laila Ali (Muhammad’s daughter) defeats IWBF and WIBA titleholder Valerie Mahfood in an eighth-round TKO at the Stratosphere to claim all three crowns. She holds them until she retires undefeated in 2007, though some critics say she dodged tough bouts.

“It is one of the great ironies of life the only way to make marijuana legal is for stoners to leave the house to vote. That obviously didn’t happen.” — Jimmy Kimmel, referring to Ohio voting down the legalization of marijuana last week.

— Norm Clarke’s column appears Sunday, Monday, Wednesday and Friday. He can be reached at 702-383-0244 or norm@reviewjournal.com. Find more online at www.normclarke.com. On Twitter: @Norm_Clarke.