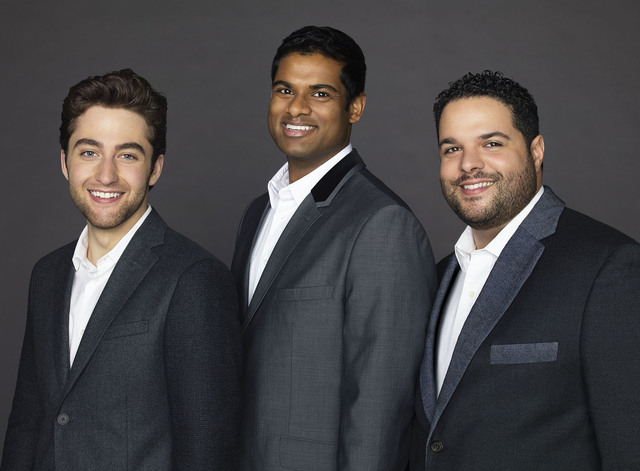 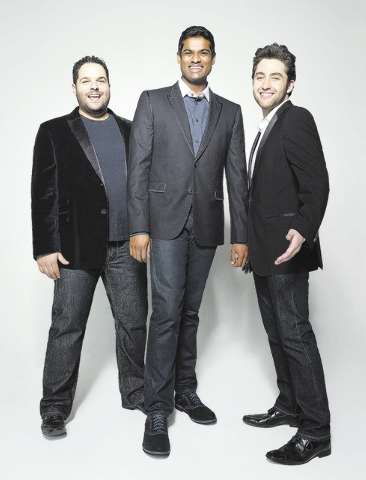 In the old days, casinos might have been skeptical about a new group doing its first full-length show in Las Vegas on the busiest weekend of the year.

But with the operatic trio Forte, that’s part of the fun. It might even be a selling point to join in on a warp-speed journey that singer Josh Page says “really is still unfolding as we keep moving forward.”

“It’s cool that the public knows that we’ve never done this before,” he adds. “We’re going to be learning so much and experiencing it along with (fans). We hope that gives it a special feel also.”

The three singers found each other online to compete on “America’s Got Talent” last summer. They didn’t win. But, just as young Jackie Evancho lost the 2010 season to Las Vegan Michael Grimm, it doesn’t seem to matter.

“Columbia Records approached us minutes after the results came out. They basically signed us right on the side of the stage,” says Fernando Varela, who sings in the trio with Page and Sean Panikkar.

“We literally recorded our album within seven days of leaving the show,” Page says.

There are many TV singing competitions, and attention spans are short. The three had to choose between rush-recording an album or joining the package of “Talent” finalists for a tour that played the MGM Grand for one night in October.

“It’s really about capitalizing on the opportunities that you have,” Panikkar says. “So many people go on the show and they’re exposed to millions of people, but they don’t have a plan in place.”

The three spoke recently in a conference call from their different home states: Page in New York, Panikkar in Michigan and Varela in Florida. The Skype era makes it possible to put together a group that met in person only days before its “Talent” audition.

Page became a viral video star after he was called up to sing at a Josh Groban concert in Madison Square Garden. Varela found him on YouTube after they had each auditioned for “Talent” as soloists. They got to talking.

“We’ve both tried this in the past, but what if we got together and tried to create a group? What do we have to lose at this point?” Page remembers.

He thinks the group’s online origins might even have given Forte a “subliminal” appeal to viewers. “It created something I think represents the true soul of America, different people coming together to create harmony.”

Panikkar came onboard after the first singer they found, Hana Ryu from South Korea, had to drop out because of visa issues. Panikkar already had a legitimate opera career, performing in November with the Milwaukee Symphony and last week as tenor soloist in the San Francisco Symphony’s “Messiah.”

People who saw him on “Talent” are now paying to see him in classical settings. “I use it as an opportunity to do something good for opera,” Panikkar says. “The opera world is kind of 100 years behind the times as far as marketing. They don’t know how to reach such a wide audience.”

Forte’s self-titled debut album is basically a “greatest hits” of “popera,” or “classical crossover” as it is known in the record industry. Backed by the Royal Philharmonic Orchestra, the trio covers all the big songs they did in 90-second versions to advance each week on TV, from “The Prayer” to “My Heart Will Go On.”

“We’re basically singing pop music in a classical style,” Panikkar says of an album rounded out by favorites such as “Bridge Over Troubled Water” and “Unchained Melody.”

But the three say they realize the dynamics of a 90-minute show are different from the need to knock one out of the park every week in a singing competition.

“We’ve kind of had that mindset as we’ve been putting the show together, this is not Carnegie Hall, this is Las Vegas, home to some of the greatest entertainers in our history,” Varela says.

“We do have a lot of fun together and I think that will translate into our show,” Page adds. “We’re going to discover a lot more about ourselves and about being in a group together.

“We get to finally show what it is to come to a Forte show, which is something we’re learning while we create it.”