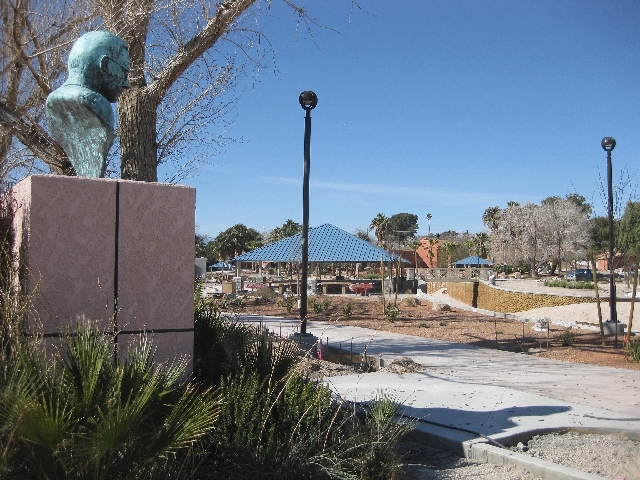 A bust of David G. Lorenzi, the original landowner, overlooks the recently renovated park that bears his name. 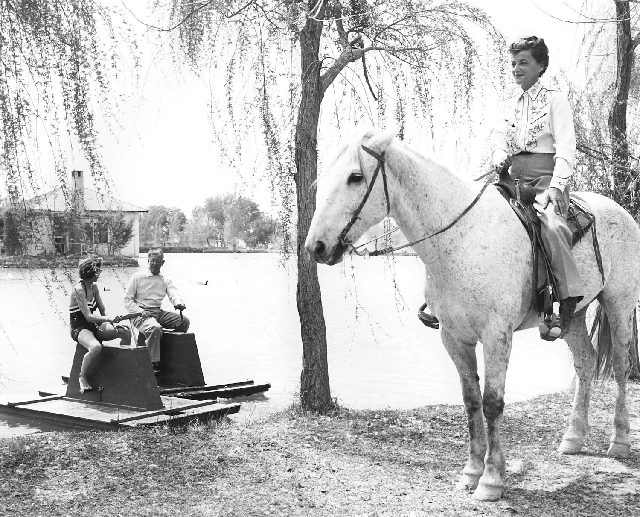 Las Vegans enjoy the Twin Lakes at Lorenzi Park on April 10, 1955. The recent renovation includes adding a band shell on an island. 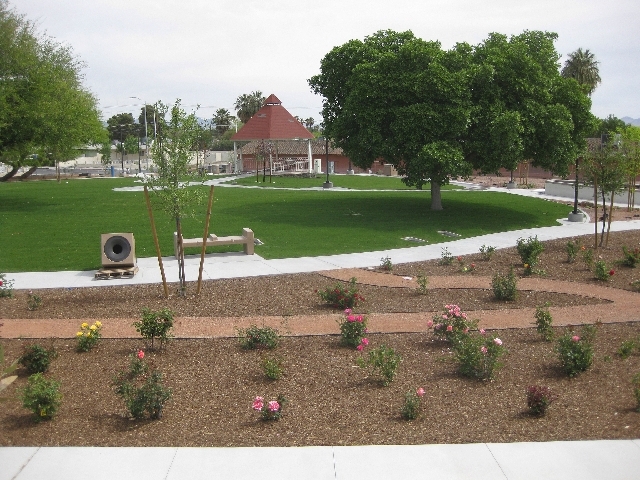 Lorenzi Park has been a part of Las Vegas since 1926, when immigrant David G. Lorenzi transformed his 1912 purchase of 80 acres into a resort. With a pool, dance pavilion, lakes and orchards, it was fun for the whole family. Since then you could say the park has reinvented itself as often as Las Vegas.

The city hopes the most recent changes, $30 million worth, will preserve the history of Lorenzi Park while simultaneously putting a new face on it.

“When I was a kid, this was the park where I learned to fish with my dad. … I fed the ducks with loaves of bread and chased the geese,” says City Councilman Ricki Barlow, an integral figure in the park’s renovations. “Walking the park in the last five to 10 years, I realized kids weren’t doing that anymore.”

Barlow noticed the pond was full of algae, the swings were broken, slides splintered, grass neglected, and there was a lot of “etch-a-sketch,” also known as graffiti, covering the walls. It was easy to see why the community no longer saw Lorenzi Park, 3333 W. Washington Ave., as a safe source of family fun.

The Bureau of Land Management’s Southern Nevada Public Lands Management Act funded the renovations, which range from a giant splash pad to a band shell for entertainment on the lake. The former is the type of feature common in hot cities, a way for kids to cool off. The latter, however, serves as a nod to the park’s roots.

Originally called Lorenzi Lake Park, the highlights included the islands formed on the man-made lake and the bridge that led visitors to them. The south island and its band shell, with a movie screen, let the public take in live music or a film while sprawled on the grass or rowing on the lake.

Barlow sees the new band shell as an opportunity to host future Jazz in the Park concerts and other musical endeavors. This way the park transitions from a daytime venue to a nighttime one.

The lake was a crucial part of the park’s face-lift. When Lorenzi purchased the parcel in 1912, it was a desert spring. He later turned it into a farm before turning that into the resort known as Lorenzi Lake Park. From 1926 to 1940, the public gathered there to watch Fourth of July fireworks. Private poker parties were held there. Dances took place every Wednesday and Saturday night. There were even women’s prizefights.

When the resort sold in 1940, though, the fun came to an abrupt halt. Thomas Sharpe took over ownership, but the property went neglected until Lloyd St. John entered the picture in 1947. Yet another transformation came about: a dude ranch called Twin Lakes Lodge.

“We restored the lake and tried to make it look like the Twin Lakes it originally was,” Marlene Siska, an architectural designer for Lorenzi Park, says of the recent renovations. “We left the north island for the birds.”

Merely giving visual reminders of the park’s past wasn’t enough for the design team. They also erected kiosks throughout the park that give detailed explanations of its history. For example, the eight bungalows of the Twin Lakes days are described as “motel rooms” that helped “market the resort for dude ranch vacations, conventions, reunions, and as a home for Nevada Test Site workers and out-of-state divorce seekers in need of a six-week residency.”

Las Vegas didn’t take ownership of the park until 1965, when it became the public park the valley knows it as today.

“It wasn’t unusual from the ’70s on for families to gather there Fridays and Saturdays for barbecues,” says Lonnie Zimmerman, deputy director of Las Vegas Parks, Recreation. “Lorenzi Park is truly an urban park with an urban pond, so it allowed for that outdoorsy activity, fishing and picnics on the lake.”

In the past five to 10 years, however, the park started to appear more run down and fewer families frequented it, the way they did 20 years ago and beyond.

The renovations, the first phase of which took place in 2009, are an effort to turn that around. A Western-themed playground was installed, a bridge connecting the park to the island’s band shell was built, the rose garden was refreshed, turf and decomposed granite were added for play fields, a new restroom building, shaded picnic areas and a more sophisticated irrigation system were added.

Barlow realizes, however, that you can’t just build it and they will come. He plans to spread the word through his annual back-to-school fair, which will be at 8 a.m. Saturday at the Sammy Davis Jr. Festival Plaza at Lorenzi Park. The park will also officially reopen that day at 11 a.m.

His hope is that parents will see the changes and want to come back to show their kids the same experience he had growing up.

“The broken window syndrome has been proven across the nation,” Barlow says. “If you don’t repair them, it causes more broken windows and Lorenzi Park had a couple broken window panes. We had to come in with the Bureau of Land Management to repair those broken windows, if you will, to attract new people to the park.”