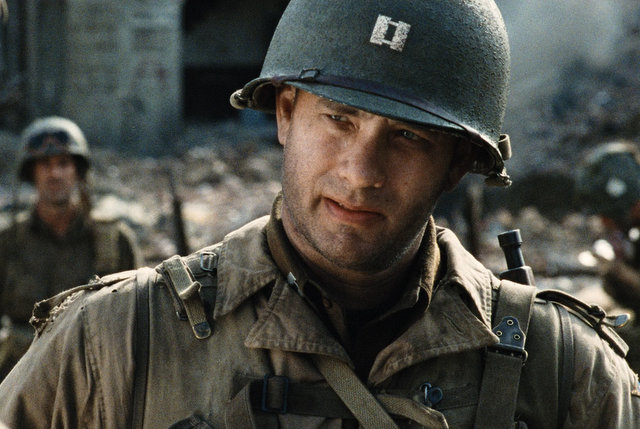 Most men tend to think they live by a different set of rules, manly rules. For example, even if you’ve never swung a hammer in your life, you own one because you assume you likely have the skills to use it. You’ve never had to rebuild an engine, but for some reason you assume it’s probably not that hard. And finally, when you watch a movie, no matter how emotional, you will not cry. You’re a dude, you don’t cry in movies.

Many a man will see “The Fault in Our Stars” this weekend and that’s exactly what this movie will try and make you do, cry like a newborn baby.

I haven’t seen “The Fault in Our Stars” yet so I can’t comment on it, but I can comment on these five movies.

Here you go guys, five movies, plus five more, you can get a little salty eyed at and keep your man card.

This movie is two and a half hours of slap you in the face awesomeness. As you watch Maximus lose everything and then become a slave, only to rise and become the unofficial leader of the world’s most powerful empire is both breathtaking and inspirational.

Why is it OK to cry during this film? Well, first off, if you watch the scene when Maximus is “reunited” with his wife and son and don’t get choked up you likely don’t have a heart. In addition to that, this movie is packed with so much action and testosterone that you know you’re shedding tears over a super manly flick.

“You know if going to Rumelle and finding him so that he can go home. If that earns me the right to get back to my wife, then that’s my mission.”

Steven Spielberg’s WWII epic changed the genre forever. The film is shot masterfully and acted brilliantly. There are several moments in the film that will get the toughest guy fighting back tears, like watching Vin Diesel try and save the little French girl, or watch Tom Hanks heroically defend his country until his last breath.

While all of these moments and many more can elicit emotions you weren’t aware you had, likely the most powerful thing is the great gratitude you feel for those brave men and women who make the ultimate sacrifice for us.

“You’re 5 foot nothin’, 100 and nothin’, and have barely a speck of athletic ability. And you hung in with the best college football players in the land for two years. And you’re gonna walk out of here with a degree from the University of Notre Dame. In this life you don’t have to prove nothin’ to nobody but yourself. And after what you’ve gone through, if you haven’t done that by now, it ain’t gonna happen.”

Just writing that nearly gets me choked up. This is the first movie on the list that most women don’t understand. My wife will never be able to comprehend how I can get emotional every time I see “Rudy” but I didn’t cry when we got married. It’s hard to explain why, but the story of Daniel E. “Rudy” Ruettiger strikes a chord in just about every male.

Watching Rudy defy every single challenge thrown at him is inspiring to the point that when the film ends and you’ve wiped your tears you’re ready to go out and make a difference in the world. Nearly every American male has had a moment when they’ve accomplished something and thought, “Man, I’m kind of like Rudy.”

So, while women may not get it, we fellas do and we will watch that movie over and over and over again and start to sniffle every single time Notre Dame Stadium breaks out into the chant, “Rudy. Rudy. Rudy.”

“Go back to England and tell them that Scotland’s daughters and her sons are yours no more. Tell them Scotland is free.”

Before there was the Gladiator Maximus in our cinemas, there was the farmer William Wallace. In 1995 Mel Gibson introduced the world to Scotland’s famous son and he instantly became the hero of men across the world.

“Braveheart” is a sweeping epic that inspired nearly everyone who saw it and continues to do so. No matter how crazy Gibson may get, his turn as Wallace will forever stand as a standard of period piece epics.

As men we think about defending the honor of our women, our home and our family. No one does this better than William Wallace, the man who started a war over the murder of his bride.

As the film comes to an end and Wallace screams, “Freedom!” if you don’t get goose bumps and teary eyed check your pulse, because you’re likely dead.

“You’re trying? Now? Where were you when it mattered? I needed this guy back when I was a kid. I don’t need you now. Everything’s already happened.”

“Warrior” was an underrated film from 2011, which is too bad, because it’s an excellent movie and left the manliest of men wiping tears from their cheeks.

Unlike “Rudy” a lot of women get why this one tugs at your heart strings. The story of two brothers who are literally fighting for their livelihood with a recovering alcoholic father who is fighting to get his boys back well make you stand up and cheer as you smile through tears.

All of the players in the film are fantastic, including Tom Hardy, who you’ll barely recognize as Batman’s foe Bane. But the real star of the show is Nick Nolte as the brothers’ repentant father. Your heart breaks for Nolte’s character even though he likely deserves much of the treatment he’s receiving.

Watching Tom Hardy’s character console his broken father in their hotel room is one of the most powerful scenes in any sports film and the closing shot of the two brothers should leave your couch saturated with tears.

So, there you have it men. Five films you can watch and cry during without fear of any repercussions. Truth is, there are many more, but as a treat here are five more that are OK to shed a tear or two during.

“Sometimes I wonder, will God forgive us for what we’ve done to each other? Then I look around and realize, God left this place a long time ago.”

“This list is an absolute good. The list is life. All around its margins lies the gulf.”

“And you just remember that your old man walked Ben Wade to that station when nobody else would.”

“It makes it worse that no one will just come out and say it. Like, ‘hey man, you’re gonna die.’”

“You died on a Saturday morning. And I had you placed here under our tree.”