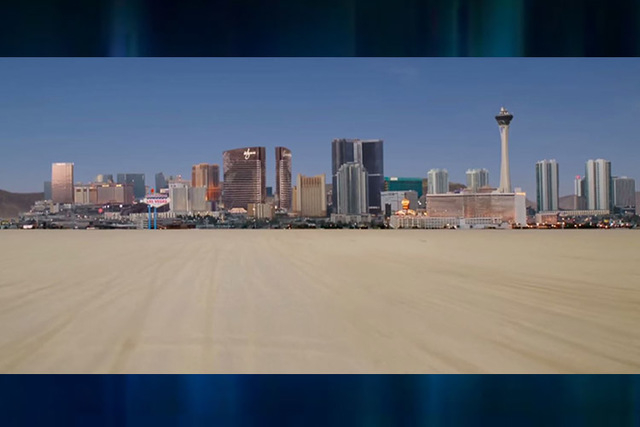 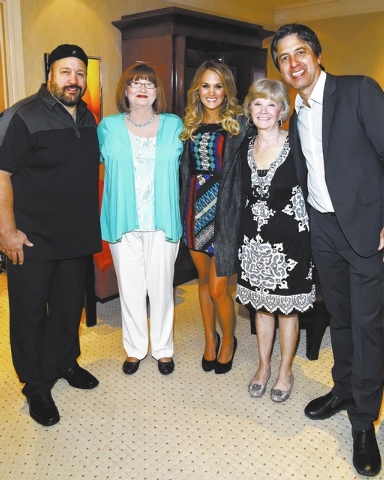 Kevin James (left) most recently performed with Ray Romano (right) April 4 at The Mirage, where he was greeted backstage by Carrie Underwood (middle), her mom Carol (on her daughter's left arm) and Underwood's other guest Donna Wasson. (Courtesy photo by Krystle Jurate/Cashman Photo)

On Monday, Kevin James will begin filming the art-heist comedy “Paul Blart: Mall Cop 2” at the Wynn for eight weeks — the first full feature Steve Wynn has ever approved on the property.

James, a headlining comedian at MGM’s rival Mirage hotel, has proved to be a big-screen star.

On Wednesday, I posed all the relevant questions to the spokesman for the hotel’s role in the film, Michael Weaver, SVP of Marketing for Wynn.

Weaver was a vice president at Caesars Entertainment when “The Hangover” was filmed there.

Big question No. 1: Where will filming happen in the hotel?

“It will be the length and breadth of the resort — nightclubs, pools, restaurants, hotel lobby, shopping esplanade,” Weaver said.

Big question No. 2: If Steve Wynn worked with “Vegas Vacation” when he owned Mirage, but he hasn’t approved features at Wynn hotel until now, what was it about this script that enticed him?

“It was intriguing to us, because the script fully integrates the artwork and the resort into a movie,” Weaver said. “The resort ends up being a co-star in the movie.

“Eighteen million people saw the last movie Kevin James did. So it’s significant exposure. Millions of people will see it.”

Big question No. 3: If the Wynn hotel is a co-star, what’s the payday for the hotel?

“There’s a combination of mutually beneficial circumstances that involve both Sony Pictures and for the resort,” is all Weaver would say.

“We’re very happy with the exposure we’re going to get. And I think Sony sees the benefit of being able to film in one of the great luxury resorts in the world.”

Big question No. 4: Obviously, no one at the Wynn is worried this movie will give thieves a by-the-numbers primer on how to steal art from the Wynn, right?

“If a potential thief were to follow the same strategies as the bad guys do in this movie, they would not be very successful. It’s very comedic, and a lot of fun,” he said.

Big question No. 5: Since Weaver was at Caesars during “The Hangover” production, what does he think of the potential for this sequel to the first “Mall Cop,” which grossed $227 million.

“There are a lot of movies that get brought to Las Vegas, and they’re not necessarily beneficial to Las Vegas. They’re interesting movies, they’re intriguing, they’re dramatic.

“But every once in a while, a movie comes along that is good for the town, like ‘The Hangover’ is, that makes people want to travel here and vacation here. I think this is that type of movie. It’ll be good for the city.

“This is about luxury and getting away, and being in paradise. So it’ll show a different type of Las Vegas than ‘Hangover’ did but equally appealing.”

Big question No. 6: As an insider, tell us why hotel executives either approve or reject a film.

“Two factors are involved in that. One is: Will it be favorable for the hotel? And second is: How invasive is the production itself?

“(Sony executives) have been extremely helpful and aware of the fact we are running a five-star resort and that is our primary focus, and they have been very willing to work around that.”

But let’s be honest. Tourists dig seeing films shot behind ropes and all that.

“They love that,” Weaver said. “Kevin James has been very present over the past week. And customers have found it exciting.”

By the way, this is one of the first movies benefiting from new state tax incentives for filmmakers. Sony gets those tax breaks, the Wynn Las Vegas does not.

Big question No. 7: Does the Wynn have any other film projects in the loop, say, a George Clooney caper?