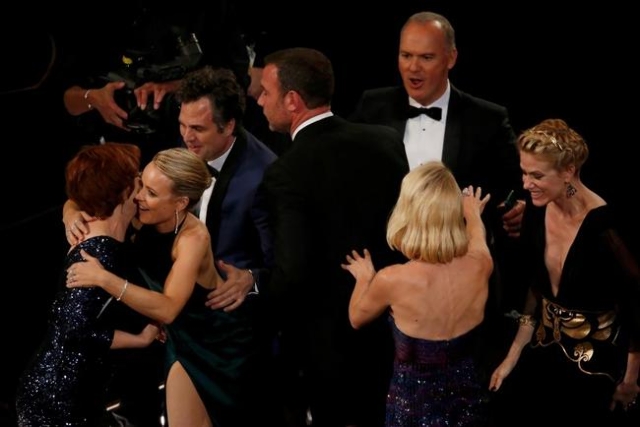 The cast of the film "Spotlight" react after they won the Oscar for Best Picture at the 88th Academy Awards in Hollywood, California February 28, 2016. REUTERS/Mario Anzuoni 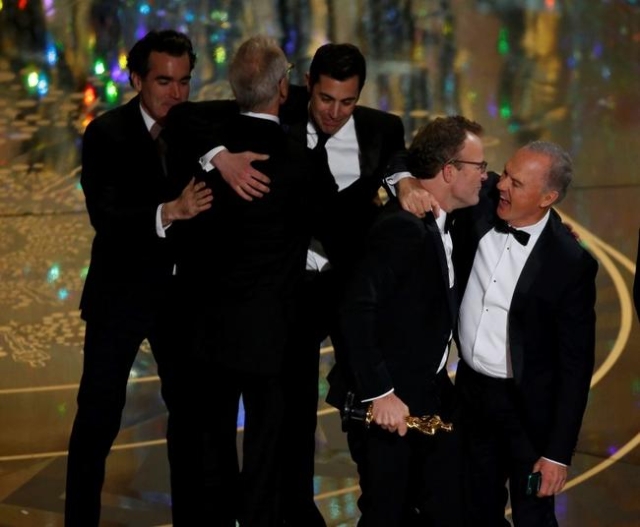 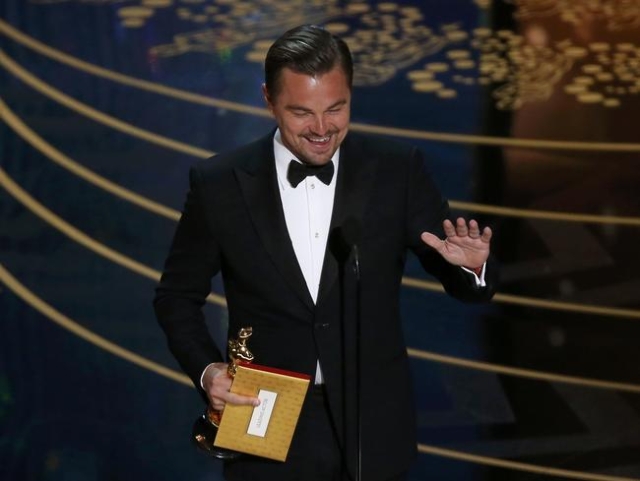 Leonardo DiCaprio accepts the Oscar for Best Actor for the movie "The Revenant" at the 88th Academy Awards in Hollywood, California February 28, 2016. REUTERS/Mario Anzuoni 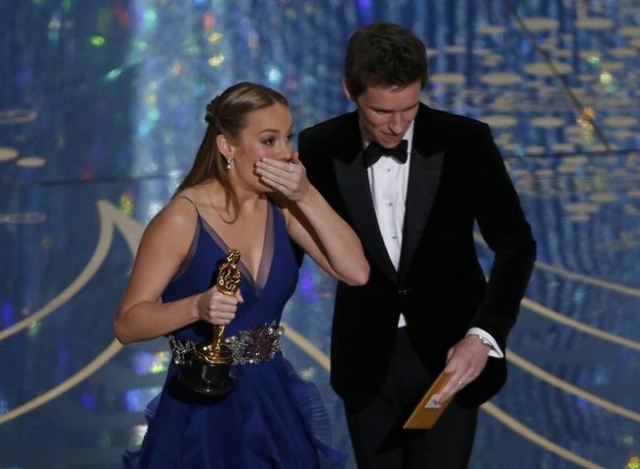 Brie Larson reacts as she takes the stage to accepts the Oscar for Best Actress for her role in "Room" from presenter Eddie Redmayne at the 88th Academy Awards in Hollywood, California February 28, 2016. REUTERS/Mario Anzuoni 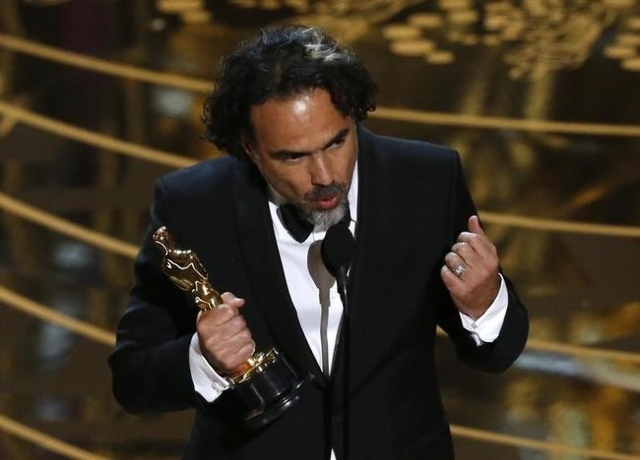 Mexico's Alejandro Inarritu wins the Oscar for Best Director for the movie "The Revanant" at the 88th Academy Awards in Hollywood, California February 28, 2016. REUTERS/Mario Anzuoni 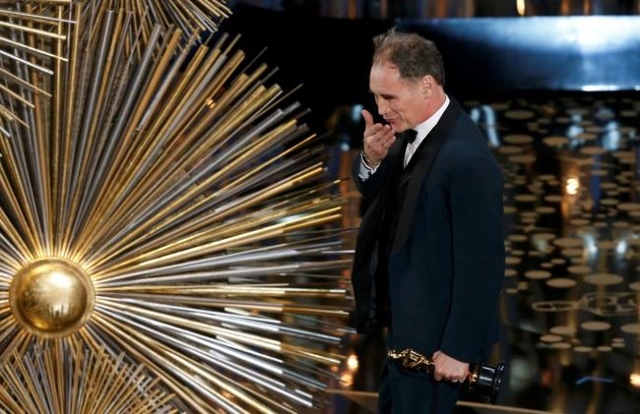 Britain's Mark Rylance blows a kiss after receiving the Oscar for Best Supporting Actor for the movie "Bridge of Spies" at the 88th Academy Awards in Hollywood, California February 28, 2016. REUTERS/Mario Anzuoni 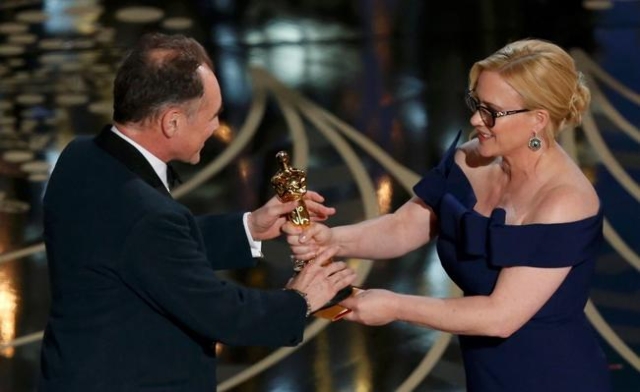 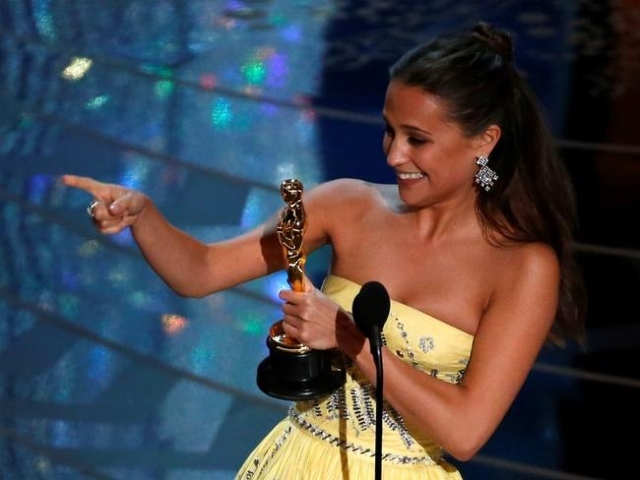 Alicia Vikander receives the Oscar for Best Supporting Actress for her role in "The Danish Girl" at the 88th Academy Awards in Hollywood, California February 28, 2016. REUTERS/Mario Anzuoni

LOS ANGELES — In an upset victory, newspaper drama “Spotlight” won best picture at the 88th Academy Awards over heavily favored survival epic “The Revenant.” The drama about the Boston Globe’s investigation into the Catholic Church sexual abuse scandal also nabbed a statue for its screenplay, while “Mad Max: Fury Road” picked up a leading sixOscars exclusively in technical categories.

It was a politically charged evening, one in which winners and presenters used their moment on stage to shine a light on issues ranging from global warming to campus rape. Sunday’s ceremony also unfolded in the wake of perhaps the biggest controversy the celebration of filmmaking excellence has faced. A backlash over the lack of nominations for actors of color for the second straight year threatened to overshadow the broadcast itself, leading to boycotts from top figures such as Spike Lee and Jada Pinkett Smith, a viral hashtag #OscarsSoWhite, and a protest outside the Dolby Theater led by Rev. Al Sharpton.

Returning for a second stint as the broadcast’s host, Chris Rock lost no time dispensing with the elephant in the room. In a monologue that took on the issue of race head-on, Rock went on to note that he considered quitting the hosting gig, before saying he reconsidered.

“The last thing I need is to lose another job to Kevin Hart,” said Rock. He added, “If they nominated hosts, I wouldn’t even get this job. You all would be watching Neil Patrick Harris right now.”

That wasn’t his only zinger. The comedian called the Oscars the “the White People’s Choice Awards,” dubbed Hollywood “sorority racist,” and said that black performers want more “opportunity” to loud applause. Race was a subject that Rock returned to throughout the program with gags that included imagining nominated films such as “The Revenant” and “The Martian” recast with African-American actors like Whoopi Goldberg and Tracy Morgan, and a bit that found him interviewing moviegoers outside an urban L.A. theater about the diversity controversy. A year after scoring a filmmaking Oscar for “Birdman,” Inarritu became only the third person in history to win back-to-back Oscars, joining an exclusive group that also includes John Ford and Joseph L. Mankiewicz. In an evening where race dominated the conversation, Inarritu urged this generation to “liberate ourself from all prejudice” and looked forward to a day when “the color of the skin becomes as irrelevant as the length of our hair.”

As expected, DiCaprio earned his first Oscar after five previous nominations for pushing himself to physical extremes as a hunter left for dead in the wilderness. His victory came at the expense of Michael Fassbender (“Jobs”), Matt Damon (“The Martian”), Bryan Cranston (“Trumbo”), and last year’s winner for “Theory of Everything,” Eddie Redmayne, nominated for “The Danish Girl.” Accepting his statue, DiCaprio, who is active in environmental causes, noted that the production had to leave Canada for Argentina in search of snow.

“Climate change is real,” said DiCaprio. “It is happening right now. It is the most urgent threat facing our entire species and we need to work collectively together and stop procrastinating.”

Brie Larson nabbed the best actress Oscar for her portrayal of an abducted woman in “Room.” The first-time nominee prevailed over past winners Cate Blanchett (“Carol”) and Jennifer Lawrence (“Joy”), as well as Saoirse Ronan (“Brooklyn”) and Charlotte Rampling (“45 Years”).

In a moment of gratitude that alluded to the technological changes roiling the entertainment business, Larson looked beyond streaming services and on-demand platforms to thank moviegoers “…for going to the theater and seeing our films.”

“Spotlight’s” victory wasn’t the only unexpected twist at the Oscars. Mark Rylance scored a best supporting actor win for his portrayal of a Soviet agent in “Bridge of Spies” over heavily favored “Creed” star Sylvester Stallone. Best known as a theater actor, the Steven Spielberg drama marks Rylance’s highest-profile film to date. He will reteam with the director in next summer’s “The B.F.G.”

“I’ve always just adored stories,” said Rylance. “So for me to have the chance to work with, I think one of the greatest storytellers of our time, Steven Spielberg, has been such an honor. And unlike some of the leaders we’re being presented with these days, he leads with such love.”

Alicia Vikander, a Swedish actress, who had head-turning roles this year in the likes of “The Man From U.N.C.L.E.” and “Ex Machina,” scored a best supporting actress statue for her portrayal of an artist whose husband undergoes gender reassignment surgery in “The Danish Girl.” Vikander thanked director Tom Hooper, co-star Eddie Redmayne, and her parents for “giving me the belief that anything can happen. Even though I never would have believed this.”

As befitting a presidential election year, many of the speeches had a proselytizing undercurrent. There was even an appearance by a candidate-that-wasn’t.

Vice President Joe Biden, who swore off a run for the White House, made the trek from D.C. to Hollywood to introduce best song nominee Lady Gaga (“Til It Happens to You”) and to raise attention about sexual violence on college campuses.

And “The Big Short’s” Adam McKay used his victory for adapting the screenplay for the financial crisis drama to urge viewers, “Don’t vote for candidates that take money from big banks, oil or weirdo billionaires.”

Best song winner Sam Smith, honored for the “Spectre” theme “The Writing’s on the Wall,” used his moment at the microphone to dedicate his award to the LGBT community.

Costume design winner Jenny Beavan (“Mad Max: Fury Road”) made a nod to the film’s story of apocalypse and societal collapse in her speech, saying, “It could be horribly prophetic — ‘Mad Max’ — if we’re not kinder to each other and if we don’t stop polluting our atmosphere. “

“Amy,” about the life and death of Amy Winehouse, nabbed a best documentary award, with the filmmakers saying they embarked on the film in order to reclaim the legacy of the late “Rehab” singer, whose stormy personal life often obscured her musical genius.

“This film’s all about Amy,” said director Asif Kapadia. “About showing the world who she really was. Not the tabloid persona.”

After six prior nominations, Ennio Morricone, the man best known for providing the backdrop to classic spaghetti Westerns such as “The Good, the Bad, and the Ugly,” earned his first competitive Oscar for “The Hateful Eight.” His victory brought the crowd at the Dolby to their feet.

“The Revenant” made history nabbing a third consecutive cinematography Oscar for Emmanuel Lubezki, whose swirling camera and lengthy tracking shots were previously honored with “Birdman” and “Gravity.”

Despite ranking as the highest-grossing film of 2015 and the third highest-grossing film in history, “Star Wars: The Force Awakens” was shut out in each of the five categories in which it was nominated. Its presence was felt, however. C3P0, BB-8, and R2-D2 were called on to present an award, while J.J. Abrams, credited with recapturing the initial trilogy’s sense of adventure in the latest installment, presented best director.

Despite the rancor that surrounded this year’s ceremony, the calls for boycotts and criticism of the Oscars for its lack of nominees of color has led to change. The Academy of Motion Picture Arts and Sciences, the group that hands out the awards, has vowed to overhaul its recruitment process with the goal of doubling the number of female and minority members by 2020.

It’s also prompted calls for more inclusion behind and in front of the camera, as well as in the boardrooms and executive suites at major studios. A USC study released in the lead up to theOscars, found that out of 109 movies, and 306 broadcast, cable and digital series, a third of speaking characters were female, less than 30% were from minority groups and a mere 2% were lesbian, gay, bisexual or transgender.

During the broadcast, Academy president Cheryl Boone Isaacs took the stage to say that the changes in the group’s rules and makeup were necessary, and that its members needed to try to do more to encourage greater diversity across the film industry.

“Our audiences are global and rich in diversity and every facet of our industry should be as well,” said Isaacs. “Everyone in the Hollywood community has a role to play in bringing about the vital changes the industry needs so that we can accurately reflect the world today.”

Performance by an actor in a leading role: Leonardo DiCaprio in “The Revenant” (WINNER) Bryan Cranston in “Trumbo” Matt Damon in “The Martian” Michael Fassbender in “Steve Jobs” Eddie Redmayne in “The Danish Girl”

Performance by an actress in a leading role: Brie Larson in “Room” (WINNER) Cate Blanchett in “Carol” Jennifer Lawrence in “Joy” Charlotte Rampling in “45 Years” Saoirse Ronan in “Brooklyn”

Performance by an actor in a supporting role: Mark Rylance in “Bridge of Spies” (WINNER) Christian Bale in “The Big Short” Tom Hardy in “The Revenant” Mark Ruffalo in “Spotlight” Sylvester Stallone in “Creed”

Performance by an actress in a supporting role: Alicia Vikander in “The Danish Girl” (WINNER) Jennifer Jason Leigh in “The Hateful Eight” Rooney Mara in “Carol” Rachel McAdams in “Spotlight” Kate Winslet in “Steve Jobs”