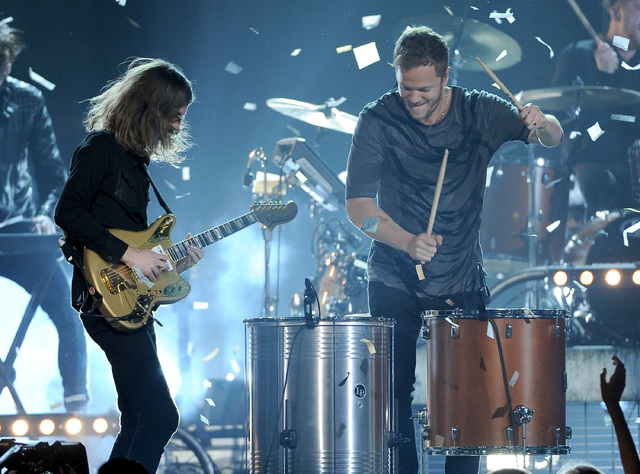 Wayne Sermon, left, and Dan Reynolds, of the musical group Imagine Dragons, perform at the Billboard Music Awards at the MGM Grand Garden Arena on Sunday, May 18, 2014, in Las Vegas. (Photo by Chris Pizzello/Invision/AP) 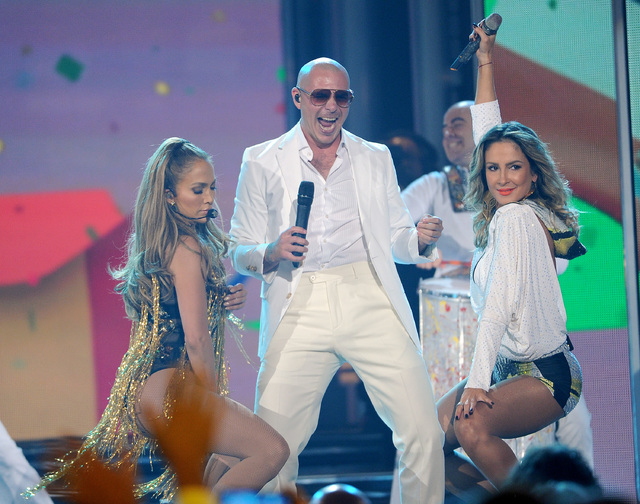 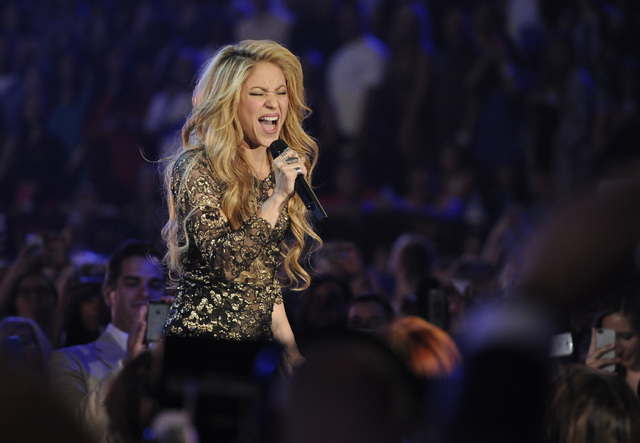 Shakira performs at the Billboard Music Awards at the MGM Grand Garden Arena on Sunday, May 18, 2014, in Las Vegas. (Photo by Chris Pizzello/Invision/AP) 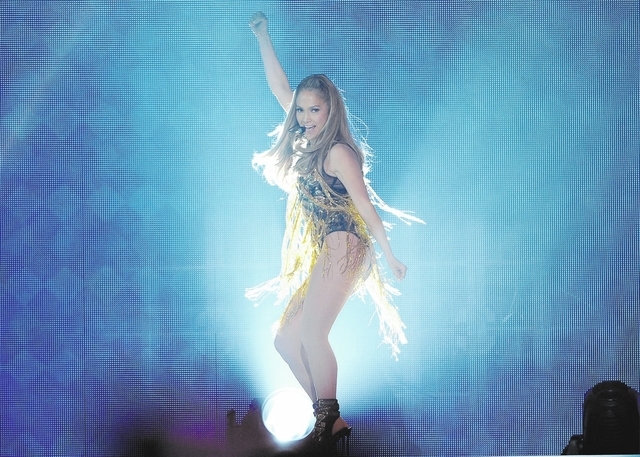 Jennifer Lopez performs on stage at the Billboard Music Awards at the MGM Grand Garden Arena on Sunday, May 18, 2014, in Las Vegas. (Photo by Chris Pizzello/Invision/AP) 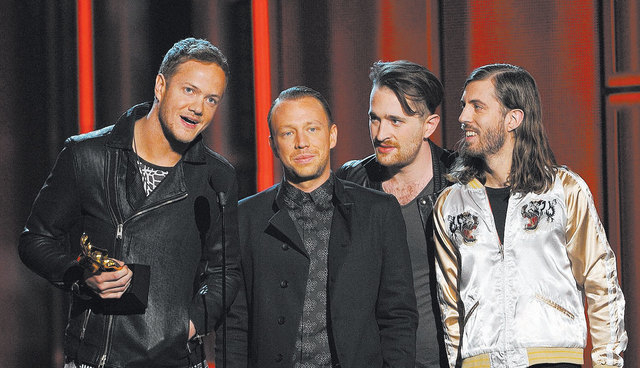 Imagine Dragons members, from left, Dan Reynolds, Ben McKee, Daniel Platzman and Wayne Sermon accept the award for top rock album Sunday at the Billboard Music Awards at the MGM Grand Garden. The group also has a collaboration in the works for the upcoming film "Transformers: Age of Extinction." (Chris Pizzello/Invision/AP) 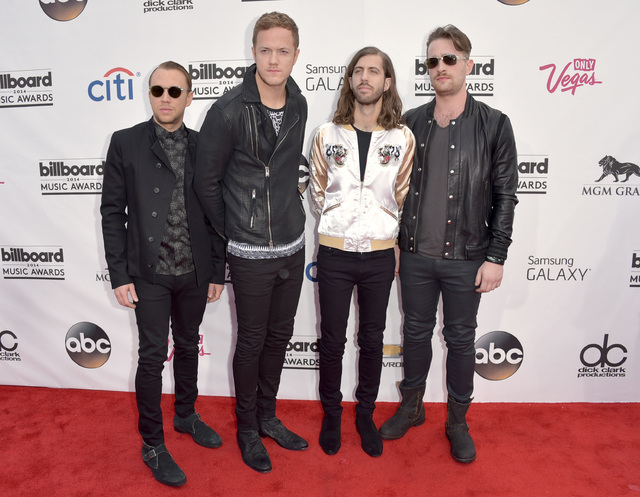 Ben McKee, from left, Dan Reynolds, Wayne Sermon and Daniel Platzman, of the musical group Imagine Dragons, arrive at the Billboard Music Awards at the MGM Grand Garden Arena on Sunday, May 18, 2014, in Las Vegas. (Photo by John Shearer/Invision/AP)

The Billboard Music Awards are a musical mashup, but they haven’t quite figured out how to carry today’s stars into the spirit realm. Michael Jackson still got his own stage.

Sunday’s three-hour ABC broadcast offered its usual cross-polination of pop, country, rock and hip-hop stars. But this year’s most unusual segment was a dimensional illusion of the late superstar, blended with live dancers on a separate stage at the rear of the MGM Grand Garden’s floor.

“It sent chills down my spine,” host Ludacris said of the hologram-like effect.

There were still enough live stars on hand to keep an arena crowd screaming, even if some of the biggest names, including Katy Perry and Miley Cyrus, performed off-campus by remote access.

Billboard magazine’s charts carve music into micro-niches, but the Billboard awards put them all in a blender for one show, even if there were few true collaborations and most performances were split onto twin stages.

Broody New Zealand teen Lorde sang the sepulchral “Tennis Court” all in black, while Las Vegas’ homegrown Imagine Dragons flipped on a confetti storm of light and energy. Latin rhythms drove the opening World Cup anthem and a later performance by Ricky Martin fired up a crowd that endured the frequent down time of commercial breaks.

Backstage, though, performers sounded excited about seeing people from other sides of the charts.

“Before you know it there won’t even be genres. It’ll just be music,” Florida Georgia Line’s Tyler Hubbard mused to reporters. “It’s honestly a beautiful time. … Every genre seems to be on fire right now. Everybody’s open-minded. It’s a beautiful thing.”

After watching Miranda Lambert and Carrie Underwood perform an explosive — with actual mushroom fireballs — duet, Hubbard volunteered to “collaborate some “bro country” with some “bra country” and see what happens.”

For her part, Underwood said Shakira “would be absolutely wonderful” to work with. “I’m all about the female power.”

Like most radio fans these days, “I don’t just listen to one kind of music,” Underwood said.

Country star Luke Bryan was down with Imagine Dragons and the Snoop Dogg duet with 2 Chainz. But that John Legend? People get all wrapped up in a Frank Sinatra past, he said, “but your iconic figure is right there playing piano for you,” Bryan said of Legend’s string-backed ballad “You and I.”

Homegrown Las Vegas rockers Imagine Dragons joked to the press room about jumping on the 215 Beltway to get to the arena and become one of the night’s biggest winners, the shortest distance traveled by any of the performers. The band has been working on its next album at its home studio. “It has a lot of emotion,” frontman Dan Reynolds said, and will reflect the group’s rise to fame, “going through these crazy changes.”

Host Ludacris dropped by the press room during an early break in the telecast to say he was 90 percent finished with the next “Fast and Furious” installment, adding it’s “a little hard” without late co-star Paul Walker, but “we’re going to make sure we carry on his legacy the right way.”

YouTube violin sensation Lindsey Stirling put the celebration of major music into perspective when she told media room reporters, “I’m so grateful no record label would believe in me,” because she “would have signed any terrible deal.”