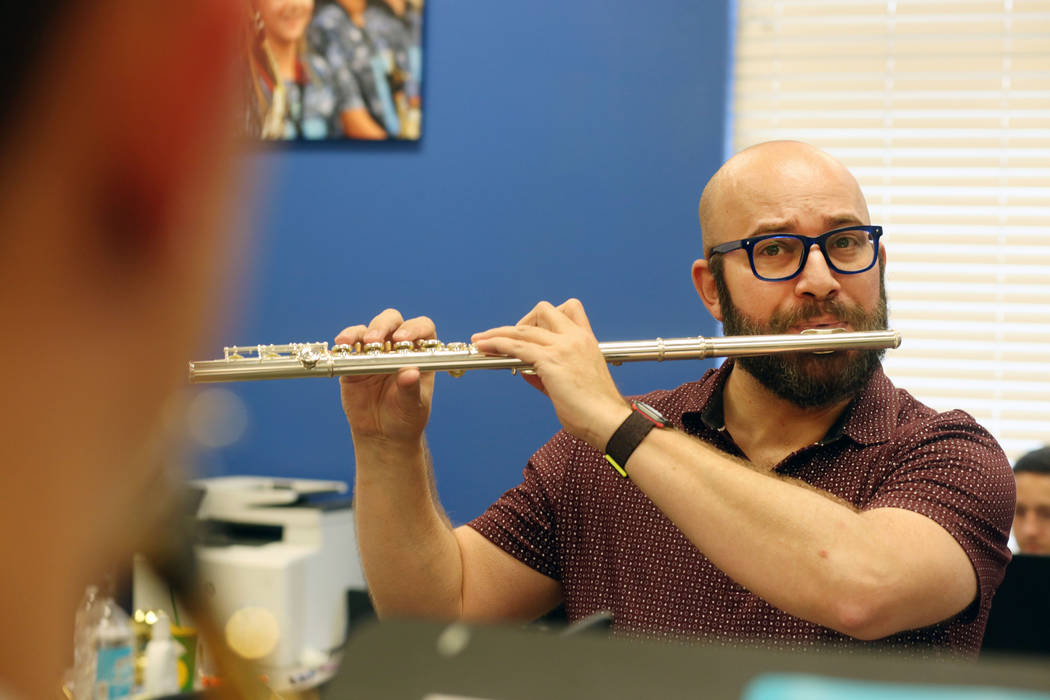 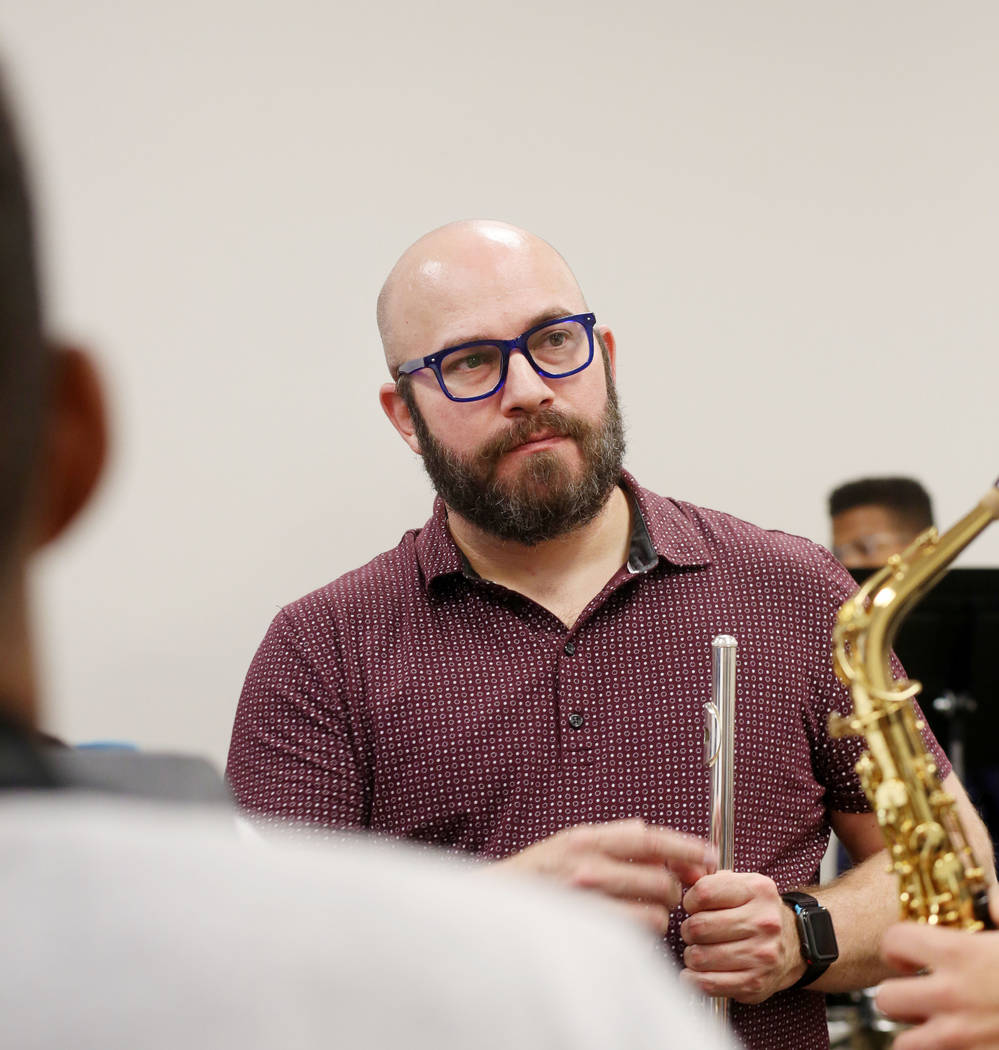 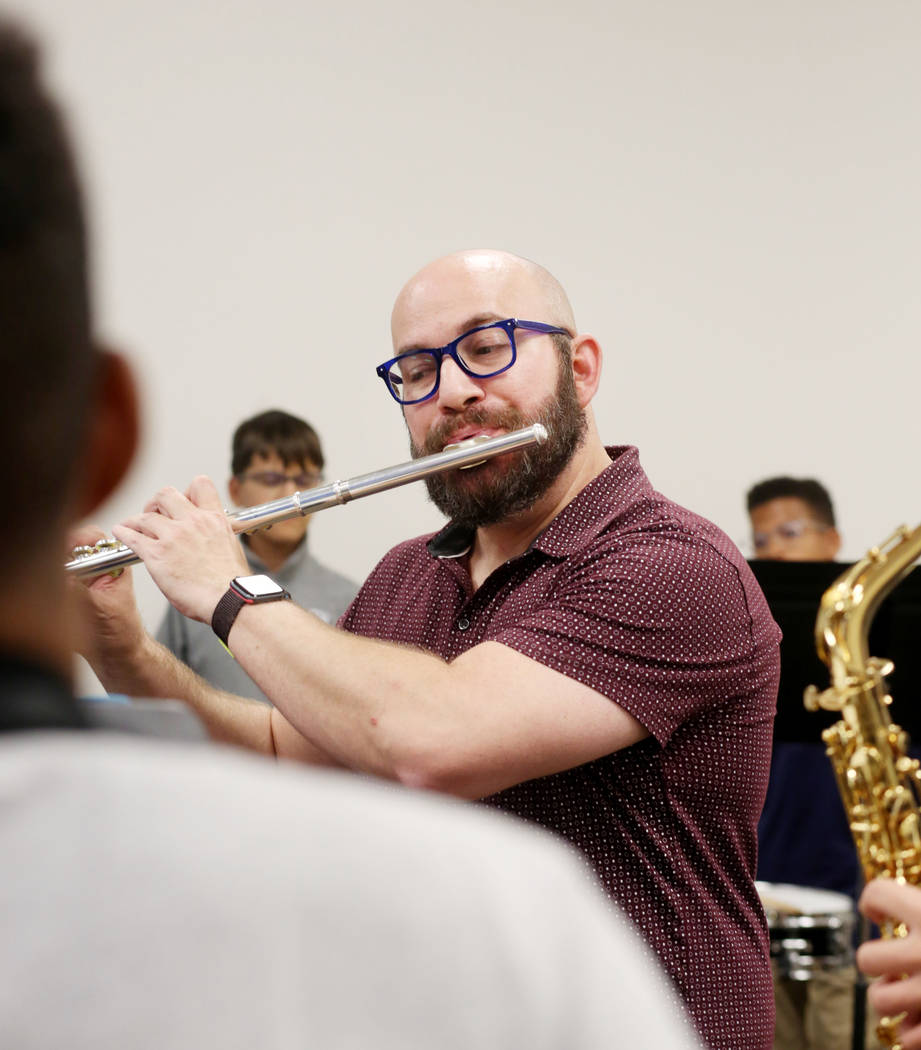 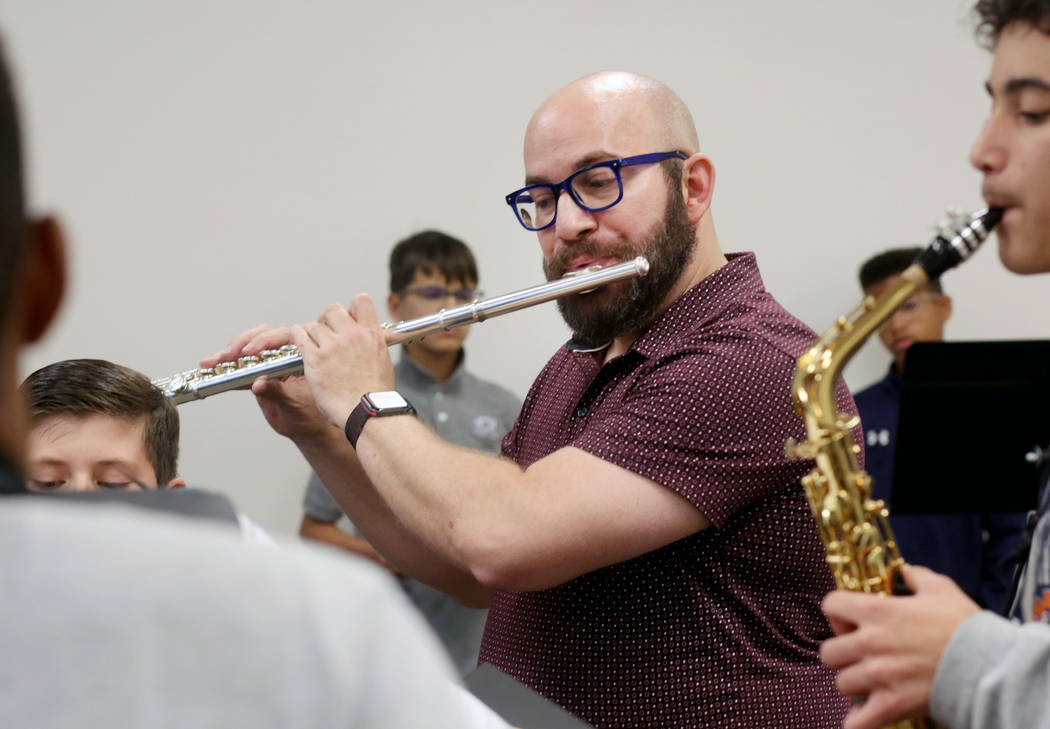 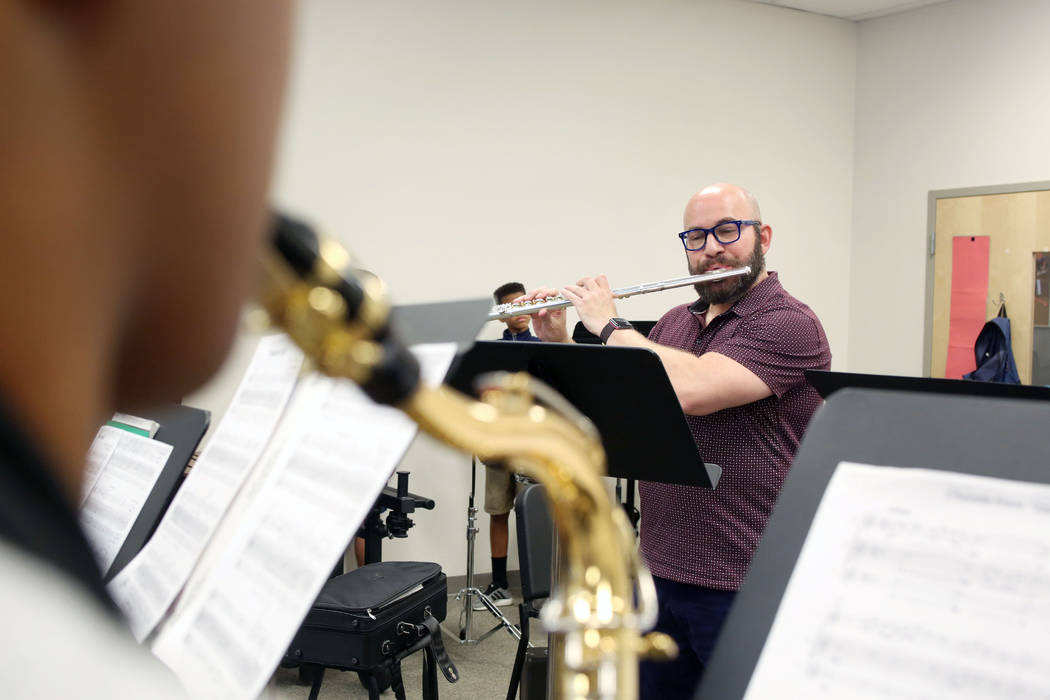 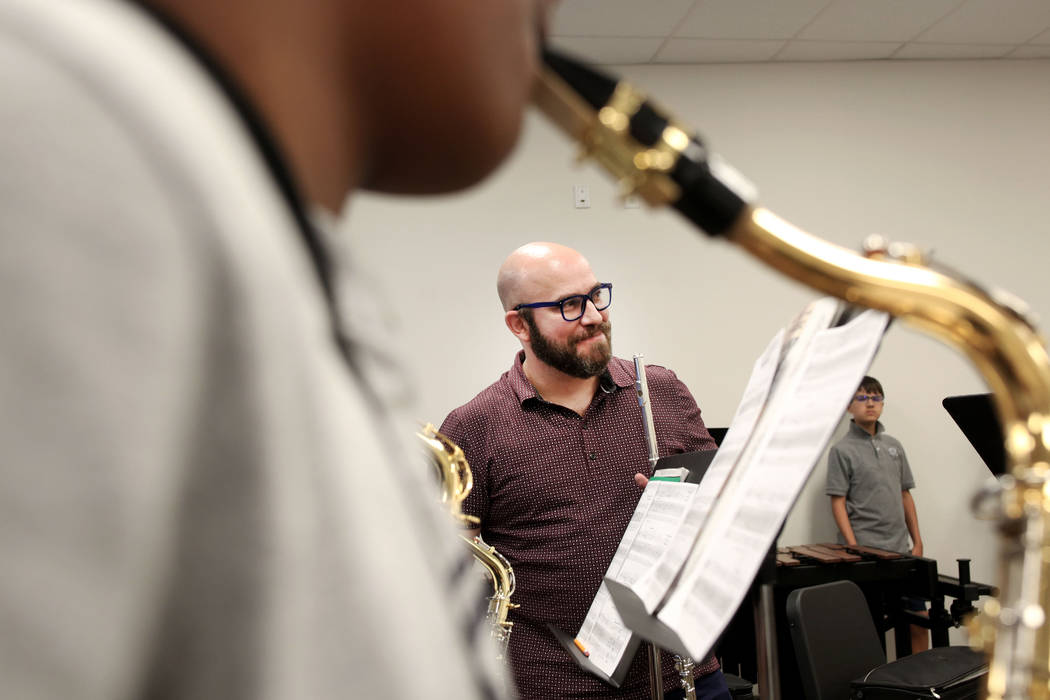 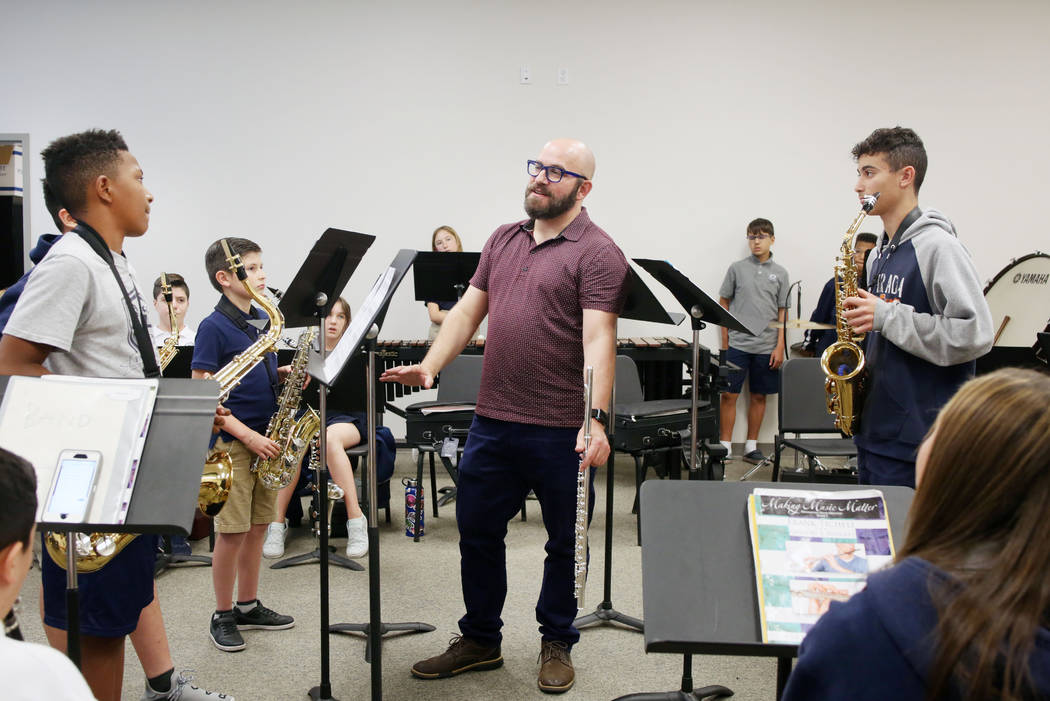 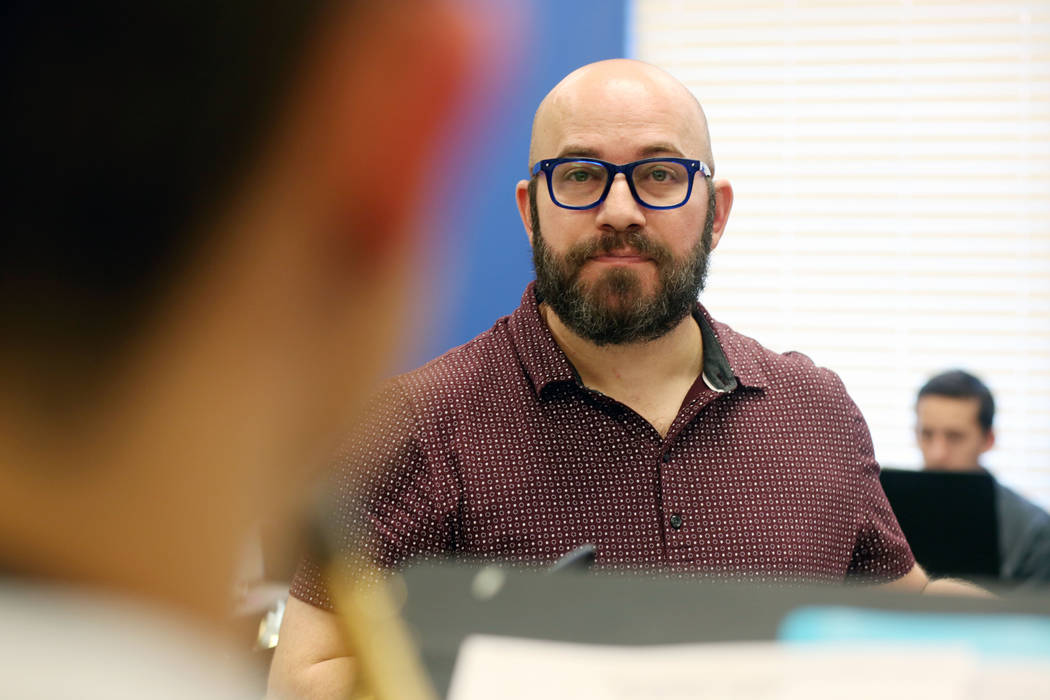 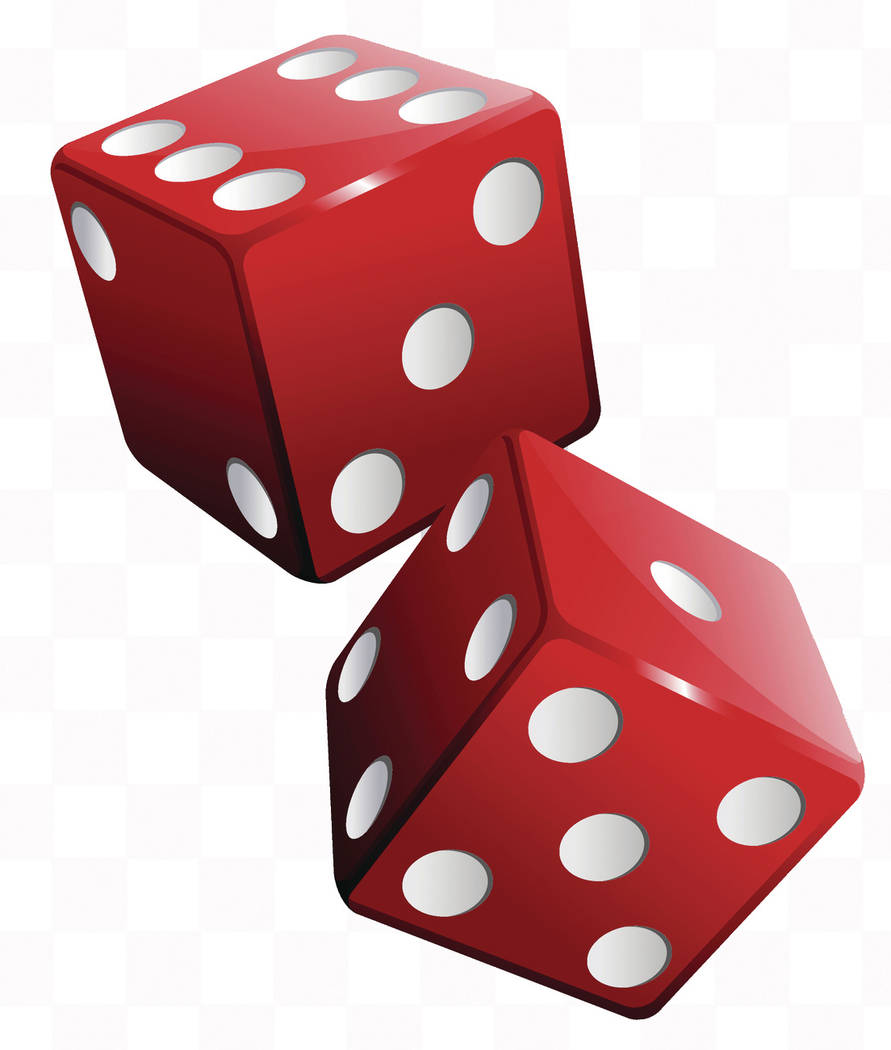 It was Chuck Maguire’s first day of conducting the new orchestra at Desert Springs United Methodist Church and the string players didn’t show up.

Under the stress of completing his doctorate at UNLV and a now-collapsing orchestra, he sought wisdom by asking himself what his recently deceased music professor would have done.

“I thought, ‘What would Gerald Welker do?’ He would take the 10 wind players and do it with them,” Maguire says.

With that, The Desert Winds, a Las Vegas-based wind ensemble, was born. This year, the nonprofit orchestra celebrates its 10th anniversary.

Maguire hadn’t planned on staying in Las Vegas after completing his doctorate of musical arts in conducting at UNLV’s School of Music. But he found that the city grew on him.

“I care about music education. I want kids to know they can go to college and don’t need to major in music but can get music scholarships,” Maguire says. “Las Vegas is a city that’s ripe to make change happen.”

Maguire has carved out a space in Las Vegas where he can do everything he loves within all levels of music.

He conducts the 46 musicians of The Desert Winds and the high school students who comprise The Honor Winds youth ensemble.

He teaches band to middle school students at Pinecrest Academy Inspirada. And, as director of the Conservatory, he oversees the music programs and 20 teachers for all three Pinecrest locations.

In its 10 years, he’s fostered the growth of The Desert Winds from a 10-piece ensemble into a community band that holds multiple concerts throughout the year.

“I did not anticipate it would go beyond the first season,” Maguire says. “But it’s grown, the quality of players has risen. A lot of pro and college level musicians play with us.”

Today, The Desert Winds and The Honor Winds are under the umbrella of the Making Music Matter Foundation, which also produces a yearly summer camp in which the musicians provide free private music training for campers.

“We try to cover every level of musician,” Maguire says.

Review-Journal: When did you first realize your love for music?

Chuck Maguire: I was in third grade and I heard Leroy Anderson’s “Sleigh Ride.” The high school band came to my elementary school. I remember hearing it for the first time, with the conductor. And I fell in love. That piece did it for me. So I remember going home that night and telling my dad and he said, ‘Well, you have to go to college.’ I said I don’t want to go to college. I don’t want to go anywhere past 12th grade. He said I had to play an instrument. I went to my room and cried. I was very upset I couldn’t just skip playing an instrument and be the guy with the stick leading the group. Eventually in fifth grade I started playing trombone. I hated it and switched to flute.

What kind of challenges do you face in leading a nonprofit?

The largest challenge is always money. In the nonprofit sector, there are so many people with so many different causes and all have equal needs. In the sea of nonprofits, how do you portray a music organization that pays for lessons the way that you do an organization that maybe supports the homeless? It’s a challenge of convincing people that what you’re trying to do is worthwhile. As a nonprofit, we are not making money. We spend every dollar we have and most gets spent on children we’re training or music we’re playing, but we’re not in the business of pulling in millions and millions.

How do you describe culture in Las Vegas?

“There’s not enough culture in Las Vegas.” I got tired of hearing that. It’s a frustrating term to hear people say because Las Vegas does have culture. It does sometimes take a backseat to the entertainment aspect of the Strip. But the community is being well reflected. We get so focused on things on the news, we come to concerts to remember that we have things in common. I think it’s vital that we’re here and have the opportunity to make a difference and make art and make music. There is culture and it’s happening and it’s awesome.

How have your teachers inspired you as a musician?

I can look back to every aspect of what I’m doing and there is a music teacher who infused that knowledge or catalyzed that level of growth that brought me to a place of understanding.

If you’re going to be a really good teacher, you’re a lifelong learner. I’ve had so many teachers who were lifelong learners. My English teacher in high school was a novelist. My science teacher researched lupus. These were professionals in their field who chose at some point to come to education because they cared enough about kids. That was so inspirational to me that they cared enough about kids and building kids up. It’s partly inspiration, partly knowledge and every teacher has a difference role.

What instruments do you play?

I have a very cursory level of knowledge on every instrument: piano, flute, piccolo, saxophone, oboe, clarinet, French horn, trumpet, euphonium, mallet percussion. I took lessons on every instrument. I felt like I needed to be well-versed on how every instrument sounds. I use that knowledge on beginners and it’s so much fun. I have a lot of friends who ask me: “You have a doctorate; why do you teach middle school?” The answer is simple, because I can. So many people feel so lofty and separated from the basic elements of society and want to conduct professional symphonies, which is cool. I have all this knowledge and inspiration and anything you can do to help inspire kids at that age, you have a role in shaping them. 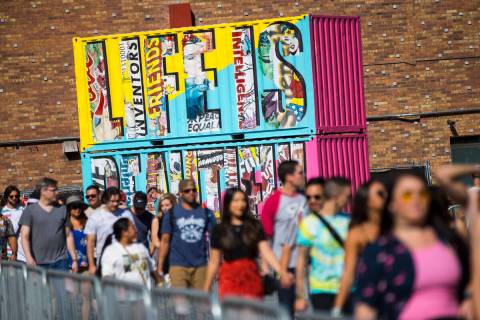