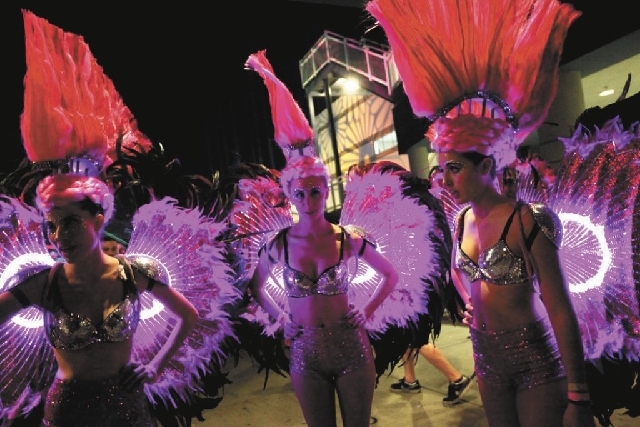 Entertainers chat before performing at the Electric Daisy Carnival early Sunday morning at the Las Vegas Motor Speedway. About 500 performers work during the weekend event, entertaining in the crowds and on stages. 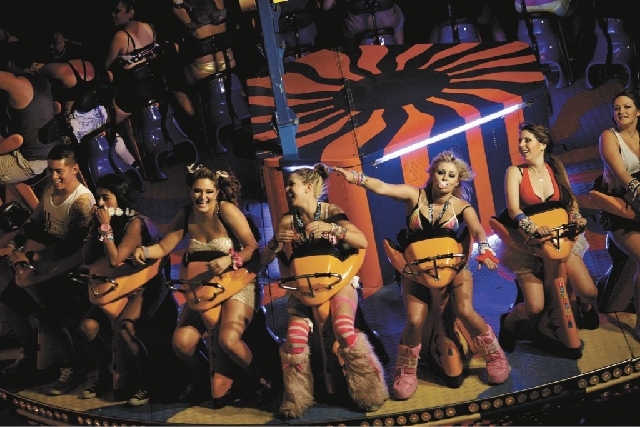 Festivalgoers take in a carnival ride at the Electric Daisy Carnival early Sunday morning at the Las Vegas Motor Speedway. 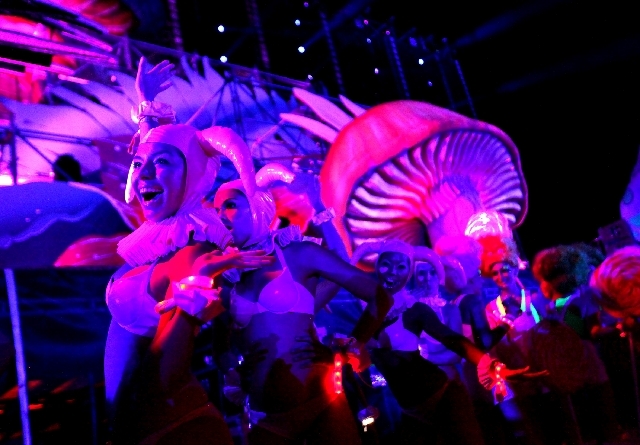 Almost 500 costumed performers were hired to entertain revelers throughout the three-day festival this weekend. 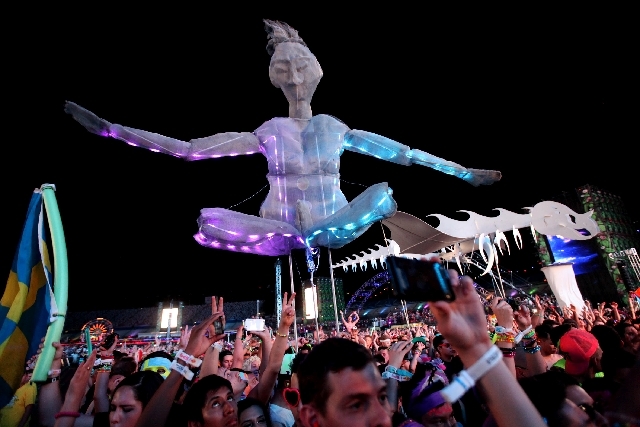 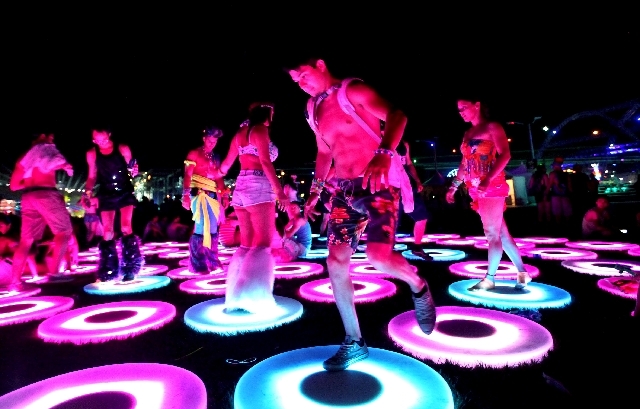 Brian Taraszka of Chicago walks with others on an interactive art installation early Sunday at the Electric Daisy Carnival. 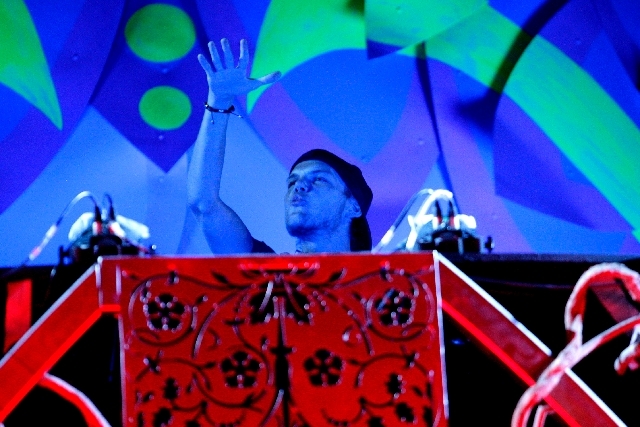 Avicii plays at the Kinetic Field at the Electric Daisy Carnival at the Las Vegas Motor Speedway on Saturday. 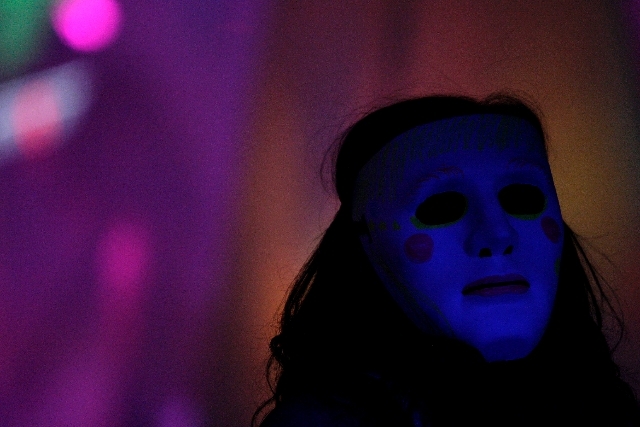 Masks were popular at the Electric Daisy Carnival at the Las Vegas Motor Speedway early Sunday.

Heart-racing music isn’t the only thing that sends jolts of energy through Electric Daisy Carnival attendees.

The sights and performances from non-DJ entertainers electrify the crowd of more than 100,000 just as much.

Roaming in between stages, stilt walkers camouflaged with stuffed animals pose for pictures with bystanders.

Elsewhere, a larger-than-life, inflatable, potato-shaped costume laced with spikes turns heads as it walks down the crowded speedway.

Those performers are among almost 500 hired by Insomniac Productions for the sole purpose of giving attendees a second-to-none experience at the three-day extravaganza.

“We make the experience more rounded and give them something a little bit different,” said Jon Dutch, a member of the wanderlust circus crew. “If you look around here, it’s definitely about the experience of the place. It’s not just about going (for the music), you see some amazing performance and costumes, too. That really adds a lot to the EDC experience.”

Each performer plays a specific character throughout the event and is barred from breaking it among the crowd.

Wearing a white tank top strapped with black suspenders and bowtie, a newsboy cap and pink glitter across his face, Dutch is playing the role of a classic strongman. True to character, Dutch used his strength during an acrobatic stunt on Friday in the middle of Kinetic Field, EDC’s largest venue. With a jam-packed crowd surrounding them, Dutch stacked a man and dancer on his shoulders. The 20-foot-high stunt drew a roar from the crowd.

His distinguished background is one of many in the cast of performers, who include people from cities across the country and different day jobs.

Take Jeff Vue, 26, of Fresno, Calif. By day, Vue is a manager of a Panda Express restaurant. During EDC weekend, Vue transforms into a robotic cop dubbed “dancerformer.”

“The crowd sees you as a performer, and it warms your heart and it opens up their heart,” Vue said. “Everyone here loves each other, and that’s what it’s all about.”

The performers are separated into three subcategories: dancers, circus performers and elaborate costume wearers. All share the same driving force .

“The crowd is what drives us,” Vue said. “It motivates us, as performers, to pump up the crowd and make them come alive with the music.”

The same fan-to-entertainer connection is what sparked Hillary Wagener to become a performer. The 20-year-old attended EDC a year ago as a spectator. This year, Wagener played an electric butterfly, a role she described as a “mix between Las Vegas showgirl, go-go dancer and Victoria’s Secret model.”

Her costume was nothing short of glamorous, with big light-up butterfly wings, sparkle eyes and an edgy bright pink mohawk.

Tasked with applying makeup for 500-plus performers are five makeup artists. Each has a specific job whether it be airbrushing, glam artistry or “specialty” makeup.

Sometimes, the small makeup staff leads to a logjam. According to Wagener, she arrived at EDC at 2 p.m. Saturday. But it was 11 p.m. before she was finished and ready to entertain the crowd.

Despite the wait time, the one-of-a-kind experience of entertaining a sold-out crowd makes up for it.

“It’s an adrenaline rush to be up in front of that many people with camera and lights everywhere,” she said. “People are constantly filming you and trying to take pictures of you. And you’re within five feet of a famous DJ, so that’s always exciting.”