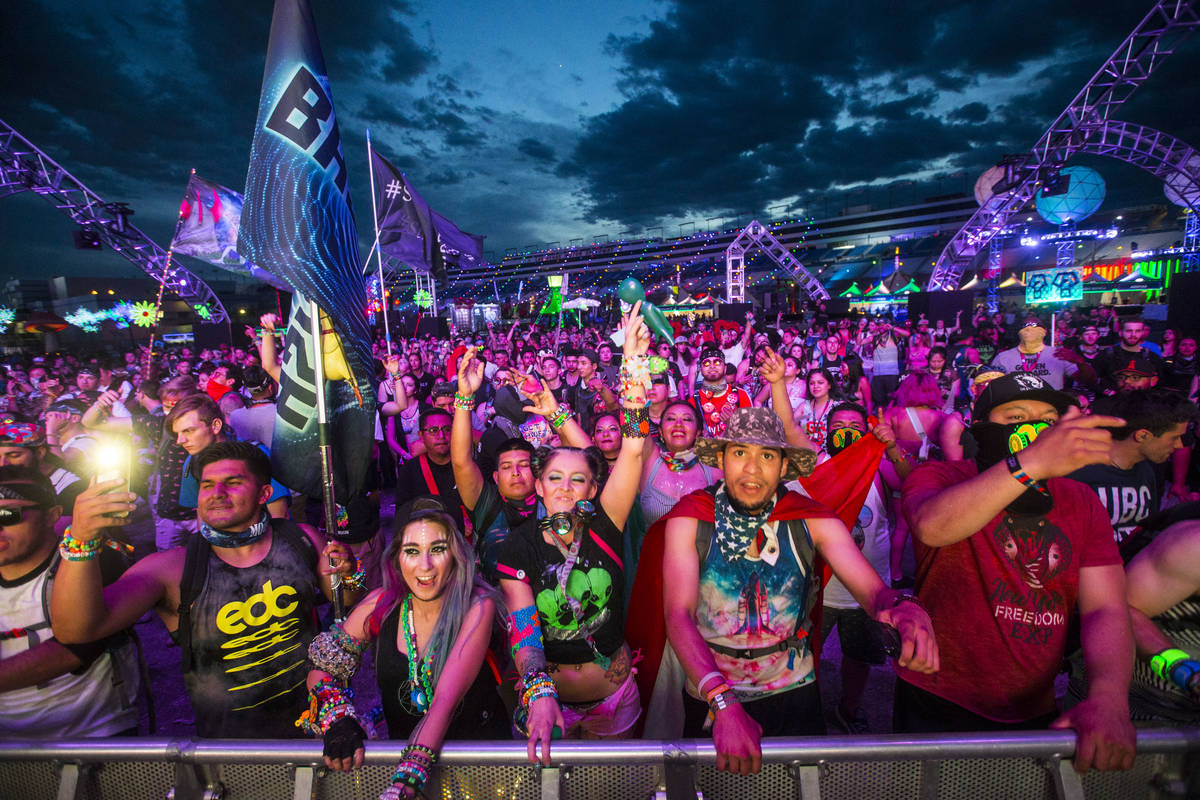 Attendees dance as Dateless performs at the Stereobloom stage during the third day of the Electric Daisy Carnival at the Las Vegas Motor Speedway in Las Vegas on May 20, 2018. (Chase Stevens/Las Vegas Review-Journal)@csstevensphoto 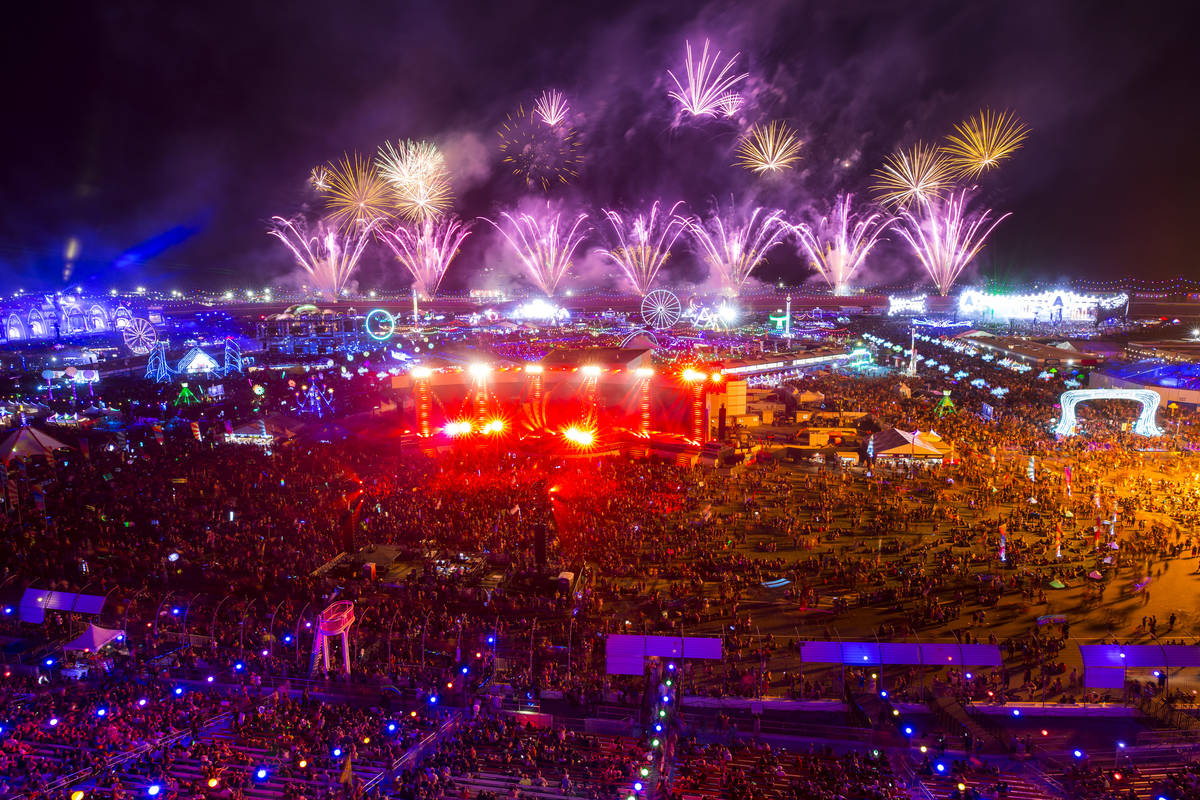 Fireworks go off on day two of the Electric Daisy Carnival at the Las Vegas Motor Speedway on Sunday, May 20, 2018. (Las Vegas Review-Journal) 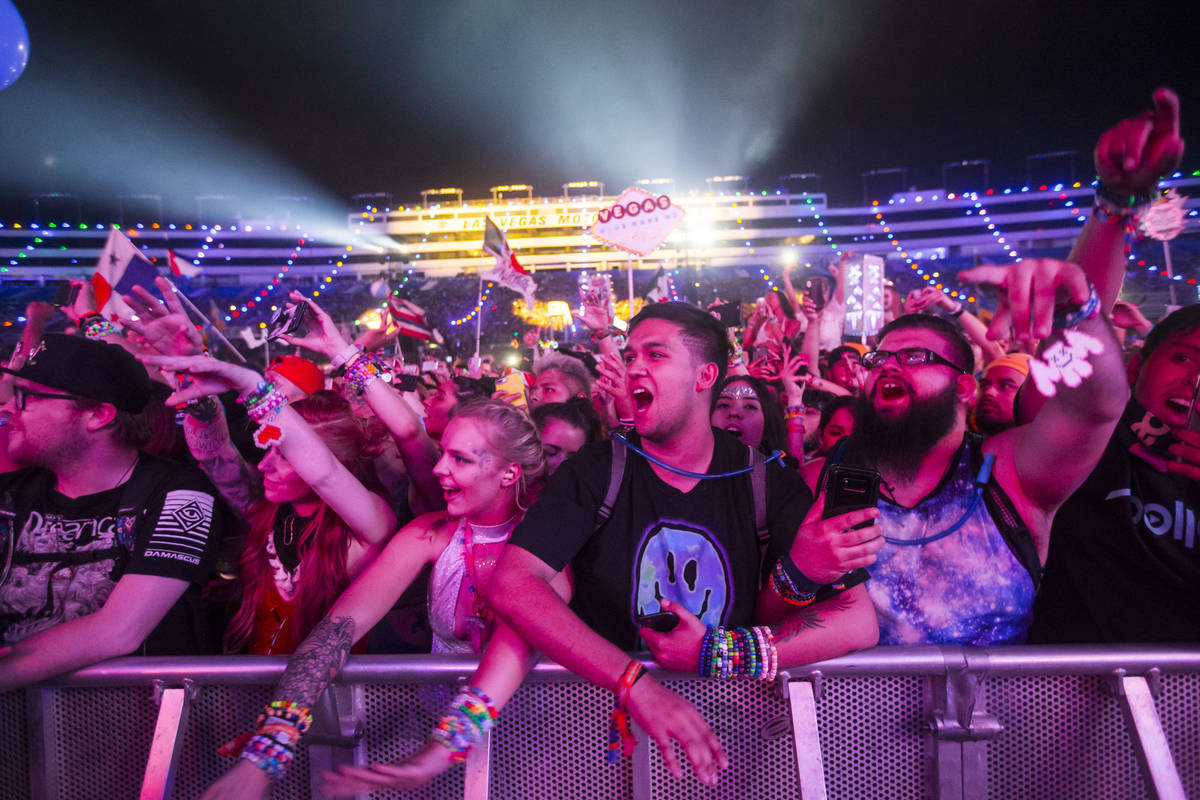 Attendees sing along as Post Malone performs at the Cosmic Meaddow stage during the third day of the Electric Daisy Carnival at the Las Vegas Motor Speedway in Las Vegas on Sunday, May 20, 2018. (Chase Stevens/Las Vegas Review-Journal) @csstevensphoto

Though festival organizers announced but two weeks ago that the three-day dance music marathon would be held as planned on May 21-23 at the Las Vegas Motor Speedway after being rescheduled twice before due to coronavirus concerns, EDC has now been bumped to October 22-24.

“As we expected and were assured prior to announcing the festival for May, Nevada state officials announced they would lift social distancing requirements as of May 1, creating a path for EDC to happen with strict safety guidelines in place,” EDC founder Pasquale Rotella wrote on an Instagram post breaking the news. “We just had a meeting in Las Vegas this past Friday with police, fire, medical, and other agencies involved with EDC to plan out details surrounding the event.”

But earlier today, Clark County officials approved a proposal that would allow for the reopening of large-scale gatherings like EDC only when 60 percent of county residents were vaccinated.

Currently, 44 percent of the eligible Clark County population has been vaccinated.

“Unfortunately, the rate at which people get vaccinated before EDC is out of our control,” Rotella wrote. “It might happen in time, it might not. Either way, we can’t take that risk.”

Judging by his post, Rotella was determined to make EDC happen in May.

“Our team has been working around the clock to organize this event,” he wrote. “We currently have over 40 trucks en route to the Las Vegas Motor Speedway from all over the country… The team and I are heartbroken, as I know many of you are as well. For those who have stayed with us on this journey, I thank you. Your trust & loyalty is what gives us strength to keep moving forward.

Tickets automatically will be transferred to the new date, while refunds also will be available for those who can’t or choose not to attend in October.

“I continue to believe it’s important we get back out on the dance floor as soon as possible,” Rotella wrote, “and I won’t give up on trying to make that happen.”