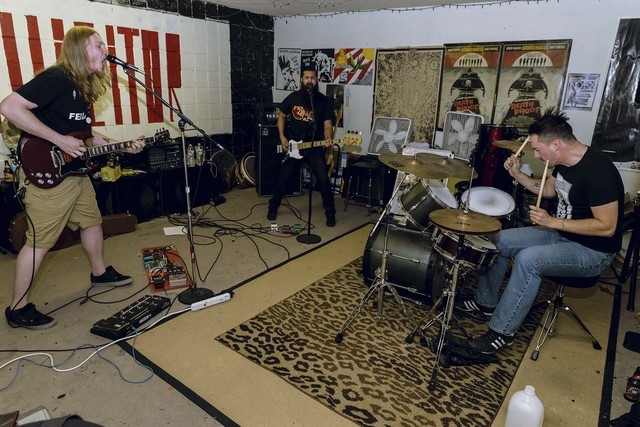 The song is as hard as the cement wall it’s reverberating off of, filling the room with a sound as thick as the air in the stuffy rehearsal space.

The tune in question is “City of Gold,” a fierce, melodic hardcore punk call to arms evocative of bulging veins and red faces, which surges from singer-guitarist Bob Gates’ cellphone through the PA in his band’s practice spot.

The name of the group is painted on the wall behind him in scarlet lettering: Illicitor.

It’s a new band that comprises familiar faces: Gates and bassist Zobi Naqshband from the late, great Holding On To Sound (HOTS), long one of Vegas’ best and most beloved punk bands before the group called it quits around this time last year, along with drummer and new recruit Micah Malcolm, best known for his anvil-fisted playing in The Quitters.

A glance at Malcolm’s cymbals says it all: They’ve been hit so hard, the metal’s been abraded and hunks are missing. They look like a boxer’s chipped teeth.

“Whenever he drums, he looks like he’s two seconds from breaking everything,” Gates notes.

He describes what it’s like when all three of them play together.

“Bang! Bang! Bang!” he exclaims, snapping his fingers. “The intensity is up there.”

Intensity is the starting point for Illicitor, the band’s ignition switch.

“The songs came out harder and angrier,” says Gates, long hair flowing out from underneath a ball cap. “HOTS had more of the dub and reggae influence. We do hint at that sometimes, but I feel like there’s more of a rage to our music, more urgency.”

Gates and Naqshband initially formed Illicitor with former HOTS drummer Vanessa Tidwell, who played with the band during its one and only show thus far in February. But they parted ways with her soon thereafter, bringing in longtime HOTS fan Malcolm, who was at Illicitor’s first gig.

“You could see them trying to prove that ‘We’re not HOTS anymore,’ in a good way,” says Malcolm, who will make his live debut with the band on Sunday at Beauty Bar. “I could definitely tell that the mission statement had changed with Illicitor — for the better.”

For Gates and Naqshband, Illicitor afforded them the opportunity to contribute more as songwriters, whereas in HOTS, singer-guitarist Bennett Mains penned much of the material.

“There’s lots and lots of songs that I’ve been writing for years and years that I never got to play in HOTS because Bennett had a pretty strong hold on the songwriting process,” says Naqshband, who acknowledges there was some initial nervousness about starting fresh after being in HOTS for so long.

But really, it doesn’t matter how it works — it only matters that it does.

“That’s what all this is,” Gates says. “Just sticking with it.”