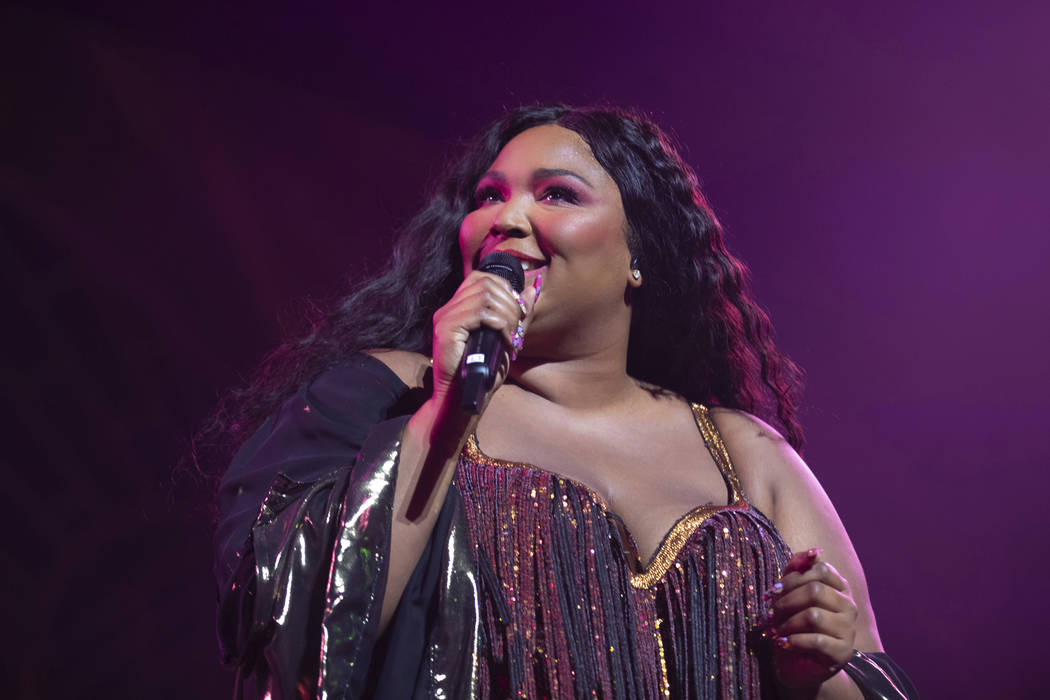 Singer/songwriter Lizzo performs on stage at The Anthem on Wednesday, Sept. 25, 2019, in Washington. (Photo by Brent N. Clarke/Invision/AP) 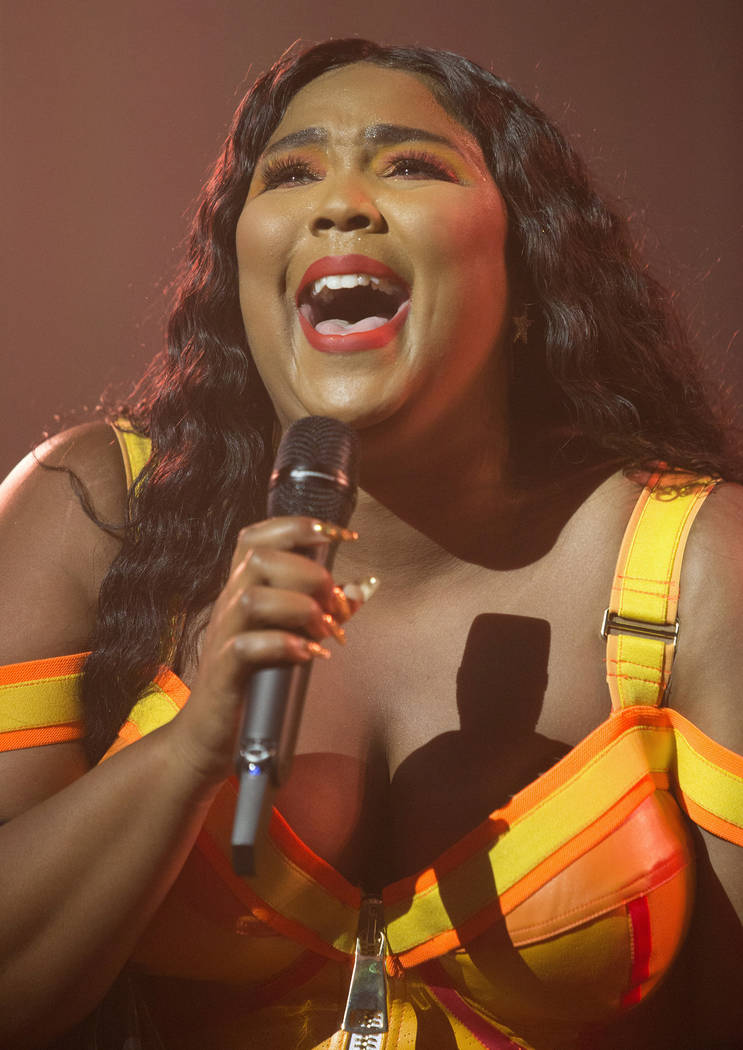 Lizzo performs in concert during her "Cuz I Love You Too Tour" at The Met on Wednesday, Sept. 18, 2019, in Philadelphia. (Photo by Owen Sweeney/Invision/AP) 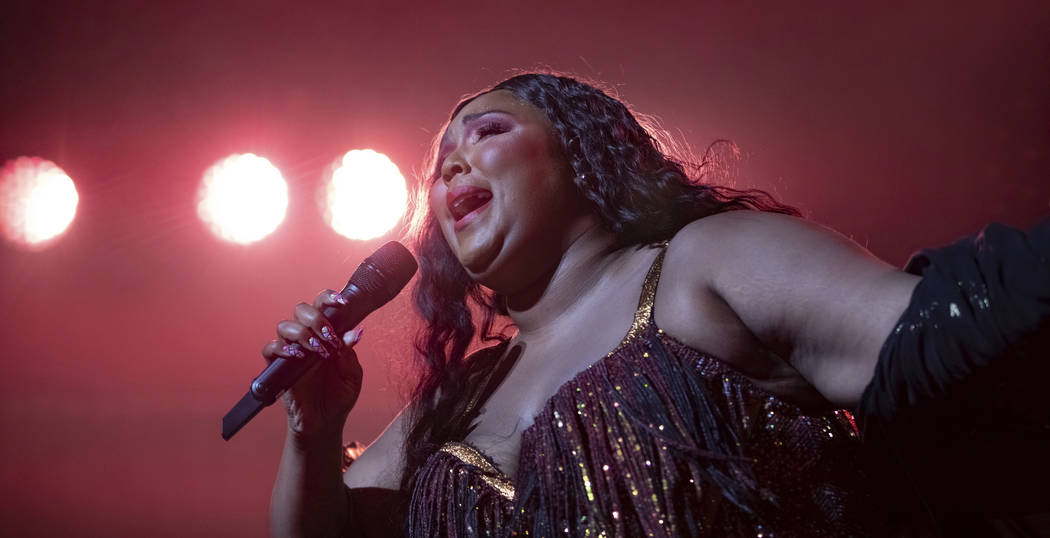 Singer/songwriter Lizzo performs on stage at The Anthem on Wednesday, Sept. 25, 2019, in Washington. (Photo by Brent N. Clarke/Invision/AP)

It has no hands, because it’s a song.

Yet you still feel like you’re getting slapped with a celebratory high-five, or 10, as it spins.

Such is the power of Lizzo.

Take the tune in question, “Good as Hell,” an irrepressible mood enhancer that’s like a booster seat for your self-esteem.

Everything about the song — the frisky piano line, the finger snaps, the human emoticon on the mic with a voice as blood-warming as a pilsner glass of Jack Daniel’s — says, “It’s all going to be OK!” with about 37 additional exclamation points that we didn’t feel like typing.

This is what Lizzo does.

The 31-year-old pop/hip-hop/R&B do-it-all is having a breakout year by being, among other things, one of the biggest, most charismatic personalities on the airwaves with an inherent knack for lifting spirits in song.

What makes her especially endearing is that all the good vibes she engenders seem so well-earned and hard-fought.

Lizzo certainly doesn’t fit the mold of a contemporary pop star, a proudly plus-size square peg who lived in her car for a year as she worked to gain a foothold in the music industry and contemplated quitting the business as she struggled to make a name for herself.

Her success was far from preordained.

But here Lizzo is, her latest album and major label debut, “Cuz I Love You,” among the year’s most critically acclaimed, a top-five hit that she’s supporting on a sold-out tour.

With Lizzo hitting Las Vegas this weekend, here are five tunes to help you feel the “Love” and then some.

Sounds like: An inhibitor of inhibitions. Opening with a guitar lead that squeals like rubber being laid on wet asphalt, Lizzo settles into a breathy lower-register purr with an assist from Missy Elliott. “I been waitin’ on this one!” Elliott exhorts on the intro. Yeah.

Message: “Thick thighs save lives.” So says the humanitarian in the vocal booth. “Slow songs, they for skinny (ladies),” Lizzo observes on the chorus. “Can’t move all of this here to one of those. I’m a thick (lass), I need tempo.” And tempo Lizzo gets on this hot-and-bothered call for dance-floor egalitarianism, where size doesn’t matter — until it does.

Sounds like: A Sunday sermon of self-love. Lizzo testifies to the merits of bear-hugging your true self with the fervor of a preacher at the pulpit with locust showers in the forecast.

Message: You can’t really love others before finding a way to love yourself. “True love ain’t somethin’ you can buy yourself,” she explains. “True love finally happens when you by yourself.” Being comfortable being alone is the first step, according to Lizzo. “I’m my own soulmate,” she sings. “No, I’m never lonely.” Besides, there are clear benefits to being the object of one’s own affection. “She never tell me to exercise / We always get extra fries,” Lizzo says of being her own best friend. “I get flowers every Sunday / I’ma marry me one day.”

Sounds like: R&B Zoloft, with Lizzo sing-rapping over a hand-clapping beat and a duck-and-cover bass line that comes at you as if you owed it money.

Message: Tony Robbins, go pound sand. Lizzo’s got the whole life coach thing down pat as evidenced here — and she looks appreciably better in a star-spangled bikini top as well (See: the video for “Tempo”). Her point on this one: If you’re looking for a pick-me-up, look in the mirror. “I am my inspiration,” she professes on the song’s bridge, getting herself all worked up for a chorus that eyes a relationship on equal terms. “Love you so, but if you don’t, I have to leave,” she sings, fancying herself a catch who’s no longer down with the chase.

Sounds like: The Big Gulp of grrl power. Her voice bouncing atop the beat like it was coated in rubber, Lizzo puts her femininity to work until its back is sore and it’s due overtime pay.

Message: “Switchin’ up the messagin’ / I’m about to add a little estrogen,” Lizzo sings. “Buy my whip by myself / Pay my rent by myself / Only exes that I care about are in my chromosomes,” she continues on this anthem of self-reliance. Really, this song isn’t just for the ladies, though: Its overriding theme of handling your business and taking care of yourself — by yourself — first and foremost, applies to pretty much everyone. So while its title alludes to gender, its meaning extends far beyond as much.

Sounds like: A shoulder rub feels. This understated ballad pairs a minimalist beat with maximalist emoting on a song that’s as candid as a diary reading.

Message: “Big Grrrl Small World.” The very title of Lizzo’s independently released second record spells out where she’s coming from. While she may be unabashedly body positive, it doesn’t mean that she got to this place easily. “I swallow my pride and my ego / I wear my flaws on my sleeve and my skin like a peacoat,” she sings here. “I see someone like me ashamed to be / And honestly, I’m really, really / I’m fed up with’ it.” This is the sound of a woman coming into her own. She hasn’t done so alone.