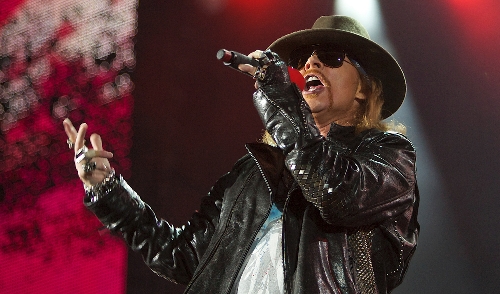 Becoming a rock star is a series of steps — kind of like getting sober, which inevitably follows.

Step 12: So few ever get here, is it really worth mentioning?

Well, for Dizzy Reed it is, and the Guns N’ Roses keyboardist got there quicker than most, joining the band in 1990, just as GNR was scaling the heights of its commercial peak.

“They were pretty much the biggest band going at the time,” Reed says of graduating from Hollywood clubs to private jets almost overnight. “I literally went from the Whisky A Go-Go on Thursday nights to flying around the world.

“I remember at one point, we were about three years into the ‘Use Your Illusion’ tour,” he continues, referencing the road work for GNR’s two-album set from 1991. “I was sitting around with some of the crew guys, and they’re telling bus stories. It came to me, and they’re like, ‘Dizzy, got any good bus stories?’ And I started laughing, like, ‘I’ve never been on a tour bus.’ ”

Reed is alluding to the fact that, while still a formidable touring act, GNR isn’t quite the draw it was, at least in the States, when the band’s gigs were guaranteed sellouts in any city with a hockey arena and electricity.

Everyone knows why: Only singer Axl Rose remains from the band’s classic lineup, as GNR has seen more musicians come and go than the local free clinic.

And then there’s the band’s long-gestating “Chinese Democracy,” an album that took nearly a decade-and-a-half to complete before being released in November 2008 to mediocre sales, moving well under a million copies in America.

The album is both nuanced and immediate, textured and visceral.

On it, Rose’s voice remains a force of nature, and just as volatile, a hair-on-fire howl tempered with a wounded-sounding lilt.

With Rose leading the way, there’s a sense of growth on the record, one that’s as personal as it is musical.

“Forgive them that tear down my soul / And bless them that they might grow old / And free them so that they may know / That it’s never too late,” Rose sings on “Madagascar,” giving voice to a sentiment that is hard to imagine him uttering 20 years ago, when he was singing venomous screeds like “Get in the Ring.”

But as Reed notes, many things have changed within the GNR camp in addition to the lineup, particularly the temperament.

“When I joined the band, it was almost self-destructive,” he says. “It was just consume, consume and do whatever the hell we wanted. It’s not really like that any more. It’s more of a business, but we’re still a band. That’s what people need to realize. I’ve mellowed out quite a bit. The booze and the drugs and whatever else, that’s not as much a part of it now.”

Of course, some of the band’s old habits remain intact, such as Rose’s peculiar habit of making fans wait for hours before taking the stage.

Reed, who does a fair amount of press, is in the somewhat challenging position of always being asked to answer for someone else, namely Rose, a mercurial figure who rarely grants interviews.

Reed knows there’s a disconnect between the public perception of Rose and the guy he’s been palling around with for more than two decades now as the longest tenured member of the band after the singer himself.

“He’s a good friend, and he’s pretty funny, man,” Reed says. “A lot of times before we go onstage, he’ll tell us a joke he just heard or something that he read that was really funny, then it’s like, ‘OK, let’s go play.’

“It’s not always a sunny, great day,” he adds, acknowledging the ups and downs of the band, “but if I didn’t enjoy it, I wouldn’t do it. And I’m still really digging it.”

Reed has another reason to be enjoying himself of late, as Guns N’ Roses was recently selected for inclusion in the Rock and Roll Hall of Fame.

Of course, this raises the obvious question: Who from this notoriously fractious band, past and present, will show up at the ceremonies?

And with the honored acts normally performing at the induction gala at some point, who will actually take the stage as Guns N’ Roses?

Reed is wondering the same things.

“I haven’t received any sort of schedule or itinerary yet, and I really don’t know much about the whole process, but I’ll do whatever, man,” Reed says, a pro at handling these kind of thorny questions. “I always say that I’m always the last to know. I could be in Tahiti or something and get a phone call, who knows?”

It’s fitting that he ends the thought with a question.

Uncertainty, drama, suspense: The members of Guns N’ Roses may have changed over the years, but at least some things have remained constant.