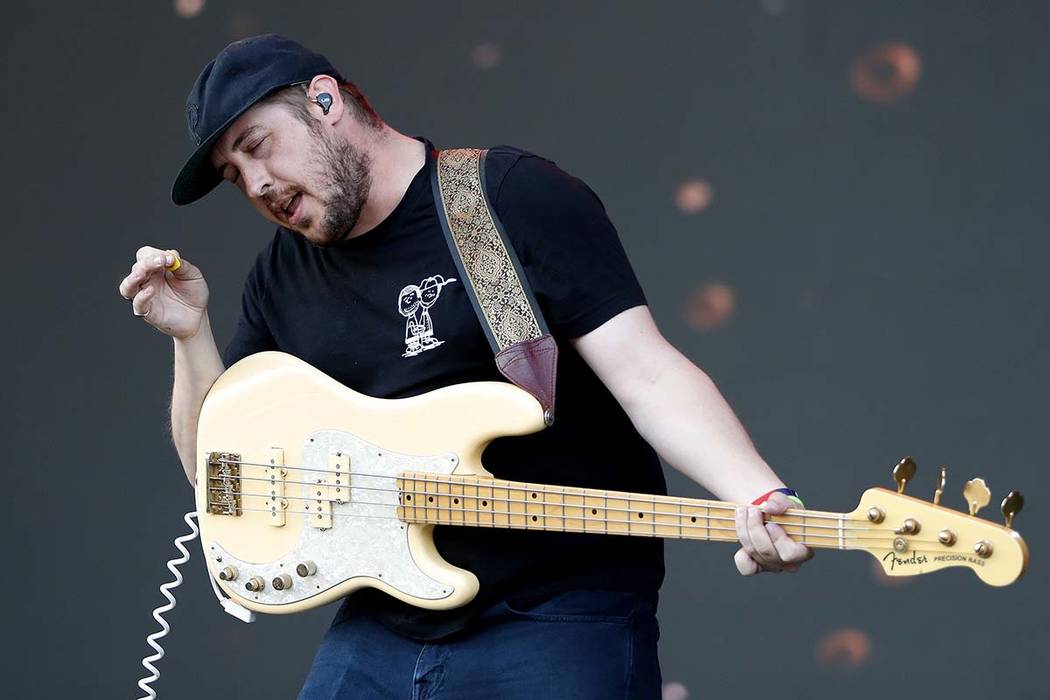 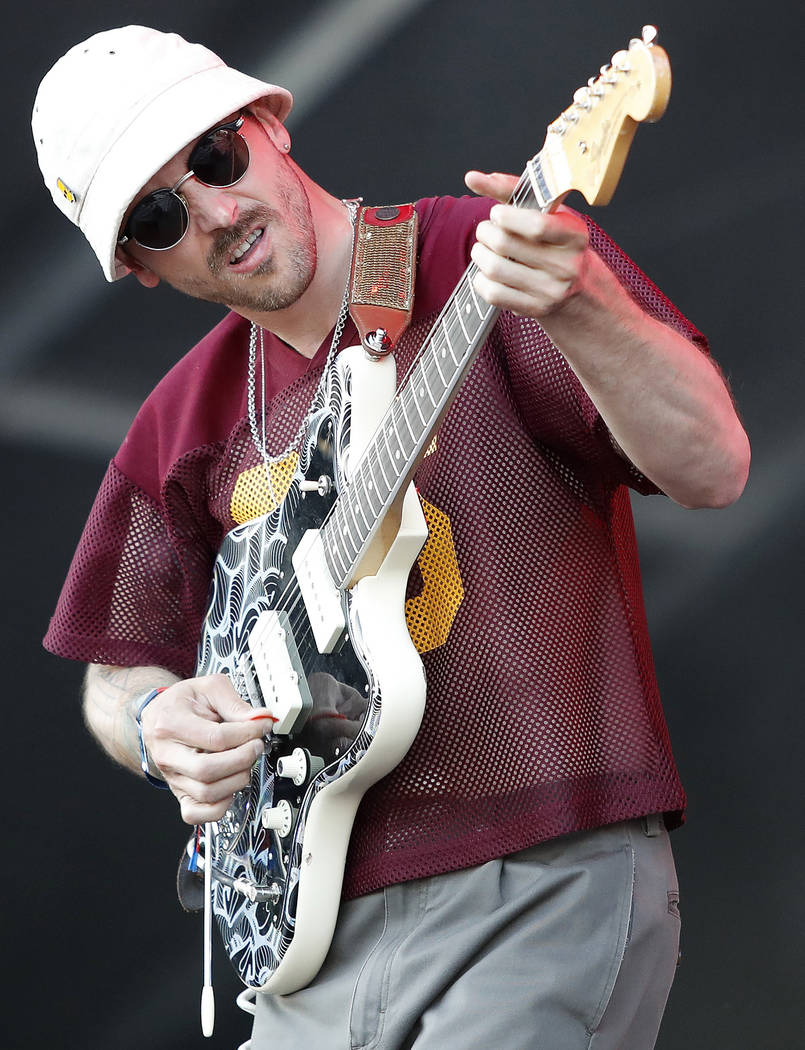 Portugal. The Man guitarist John Gourley performs at the Boston Calling Music Festival on Friday, May 25, 2018, in Allston, Mass. (Photo by Winslow Townson/Invision/AP) 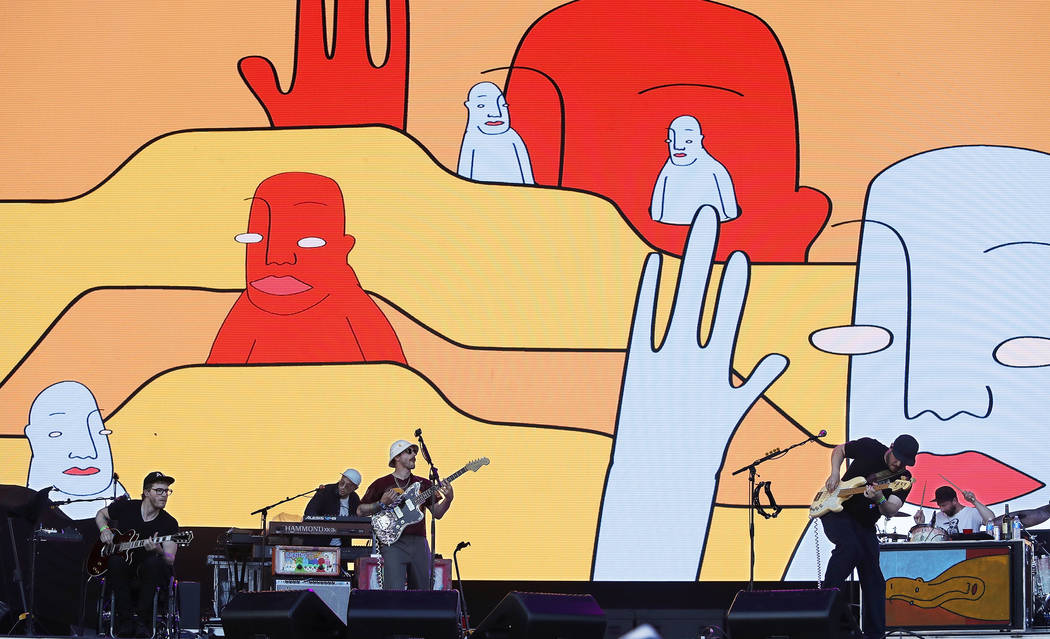 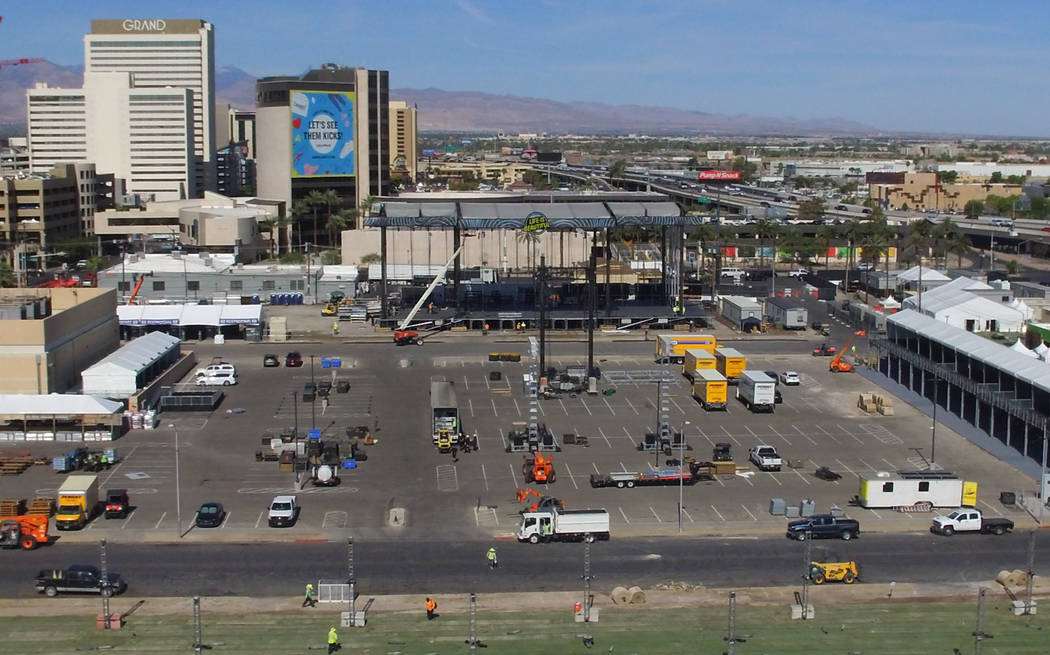 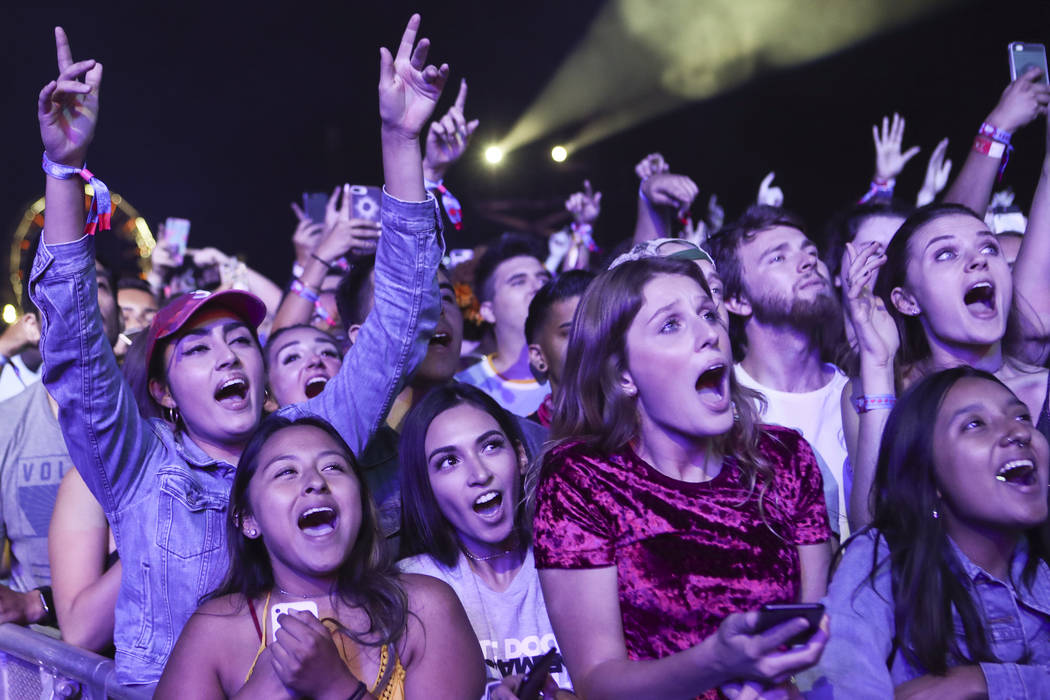 Fans react as Chance the Rapper performs on the first day of the Life is Beautiful festival in downtown in Las Vegas on Friday, Sept. 22, 2017. Chase Stevens Las Vegas Review-Journal @csstevensphoto

He knew things were about to change upon getting props from a certain Danish metaller and a pair of ceaselessly chipper “Today” show hosts.

Flashback to 2017: Anything-goes alt-rockers Portugal. The Man had just dropped their soon-to-be-ubiquitous single “Feel It Still.”

“I remember the first two big people who talked about it,” the 37-year-old Carothers recalls. “Both Kathy Lee (Gifford) and Hoda (Kotb) said that it was their song of the summer. And then the day before, Lars Ulrich from Metallica said it was his song of the summer.

“At that point, I was like, ‘Damn, I think we cast the net pretty wide. If we can get some people in the middle, we might do all right.’ ”

“Feel It Still,” a doo-wop-informed, instantly hummable invocation of the past as a means of improving the present, became a smash hit.

It would reach No. 1 on six airplay charts, sell more than 5 million copies, soundtrack commercials for everything from vitamin water to CGI rabbit flicks and be streamed more than 700 million times on Spotify.

For an Alaska-born band on its eighth album after having toured in vans for years, the game had changed.

“We knew it was a good song and thought it’d do pretty well on alternative radio” Carothers says. “It did, and then we were at the label, having a meeting in New York, and the pop team came in. It was kind of a ridiculous. They came in and were talking about pushing it over to mainstream (radio). We were just of kind of like, ‘What?’ At the time, I was 36, from Wasilla, Alaska; I’m like, ‘I got no business being in the pop world.’ ”

Yet that’s where he’d find himself, complete with a Grammy for best pop duo/group performance, which Portugal. The Man earned in January.

The band didn’t see any of it coming.

“I gotta say, we were not prepared for that,” Carothers says. “We put out that album out, and we had no idea what ‘Feel It Still’ would do — and it did a lot. We were busy little bees, just constantly playing catch-up. We got pulled in a lot of directions. Now, having a taste of that world, we’re a little bit more prepared.”

A whirlwind two years behind it, the band is working on its next album, with about 30 songs written, according to Carothers.

“We’re going future-punk on this,” he says. “It’s hard to describe, but we’re definitely trying to do something new.”

As a means of helping capture the right vibe for the record, they’ve hit upon a novel way of decorating the studio.

“We made actual mood boards, like giant, 7-foot-tall boards with a bunch of pictures on them,” Carothers says. “It’s all about our childhood, the children growing up now, the world we’re living in and where we want to get to, so it’s a bunch of people with Molotov cocktails in front of riot police and then a bunch of pictures of Mr. Rogers.”

The notoriously hard-touring band hasn’t been on the road as much this year, though it’s taking a break from the writing process to return to Life is Beautiful.

The group was impressed by how smoothly things went in 2013, the fest’s inaugural year.

“We were very surprised,” Carothers says. “First years of festivals generally don’t go super smooth, and that one was completely rad. Everything on our end was super dialed in. They had it all together. It was awesome, man. Super good vibes.”

Carothers notes that he has an uncanny ability to remember all of Portugal. The Man’s shows, so we put him to the test and ask about the band’s first Vegas gig, at the now-shuttered Jillian’s downtown in 2006.

Not only does he recall that concert in vivid detail (“We had our buddies from a band called Ryu vs. M. Bison come up and rap on stage. We’re still buds with them.”), he shares a memory from the first time he and Portugal. The Man singer-guitarist John Gourley ever played here, with their previous band Anatomy of a Ghost more than a decade and a half ago.

“We were just poorer than poor,” Carothers says. “I remember that I had 20 dollars to my name — savings and everything, I had 20 bucks. We went out and gambled for the first time, and I hit on roulette, got like a few hundred bucks. And so just for one night, we went out and bought everybody we were on tour with dinner and we had drinks and fun and stayed up all night.

Portugal. The Man returns to Vegas with slightly fatter pockets this weekend. The group’s set at 11:15 p.m. Friday at the Bacardi Stage is one of the many Life is Beautiful performances you don’t want to miss. Here are 10 more:

Walk the Moon (7:35 p.m. Friday, Downtown Stage): These electro-pop mood enhancers will perform with aerialists and dancers from Cirque du Soleil during their hit “One Foot.” Miss this one and you’ll probably never see it again: It’s a Life is Beautiful exclusive.

Billie Eilish (9:20 p.m. Friday, Downtown Stage): Like Travis Scott in 2018, the 17-year-old “Bad Guy” with an anesthetizing voice that could be bottled and sold as a muscle relaxer is Life is Beautiful’s hottest booking.

The Regrettes (3 p.m. Saturday, Toyota Music Den; 5:15 p.m. Saturday Huntridge Stage): They’ve got regrettes, and you’ll be able to relate if you miss this pulse-acclerating, riot grrl-informed, coed power pop quartet not once but twice this weekend.

The Black Keys (11:10 p.m Saturday, Downtown Stage): “Let’s Rock,” these garage-y Ohioans declare on their new album of the same name. Sounds like a plan, dudes.

Hot Chip (7:50 p.m. Sunday, Bacardi Stage) Come Sunday, when your feet are feeling a little tired and those dogs are not just barking, but howling at the moon, these blissed-out Brit synth popsters will provide some pep for that step.

Carly Rae Jepsen (9:10 p.m. Sunday, Bacardi Stage): Forget “Call Me Maybe” — if you can, a lobotomy may be required — for Jespen’s inescapable 2012 earworm isn’t all that indicative of the adventurous, tirelessly charismatic pop that’s characterized her songbook ever since.

Vampire Weekend (9:25 Sunday, Downtown Stage): It’s starting to feel 2013 up in here, as these Afro-beat influenced alt-rockers join Monae, Portugal. The Man and Zedd as first-year LiB performers returning to the fest. They’re doing so on the heels of their latest album, “Father of the Bride,” one of the year’s best.

Sheck Wes (10:30 Sunday, Fremont Stage): Get 10-pound-bar-of-Lava-soap gritty with this ascendant 21-year-old MC whose debut album, “Mudboy,” is as artfully grimy as its title implies.