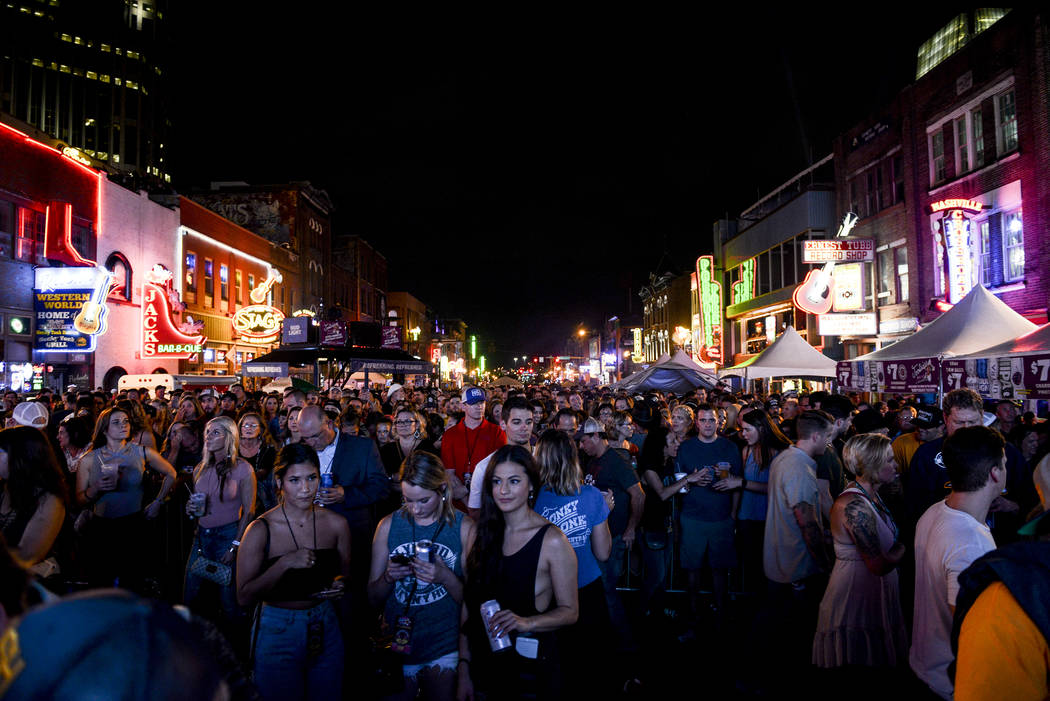 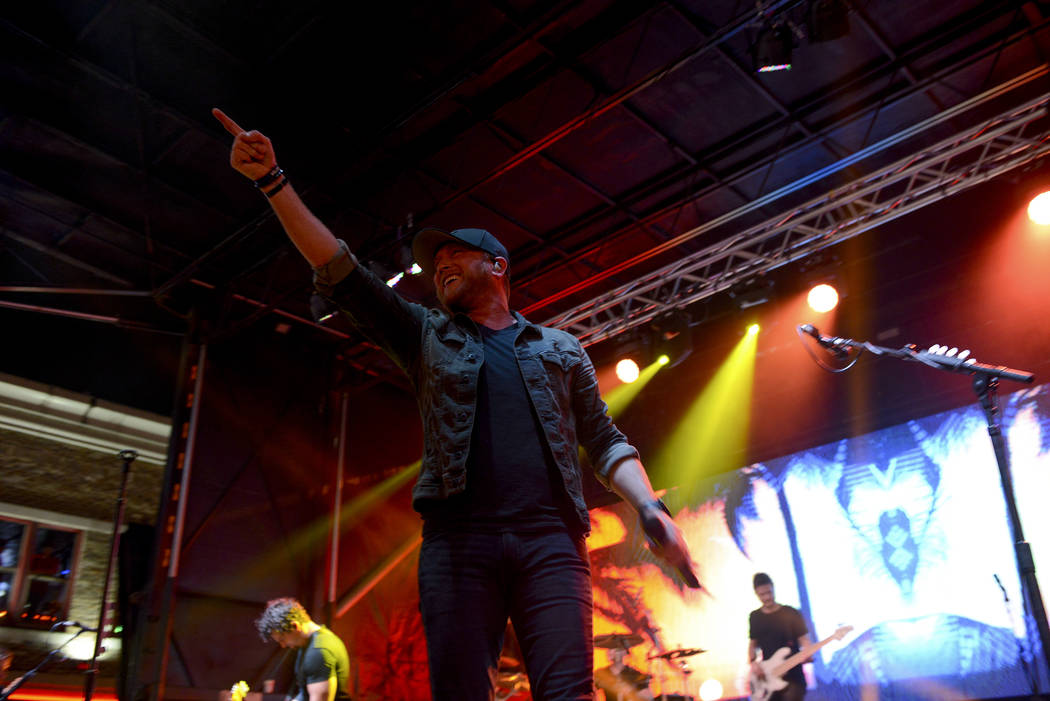 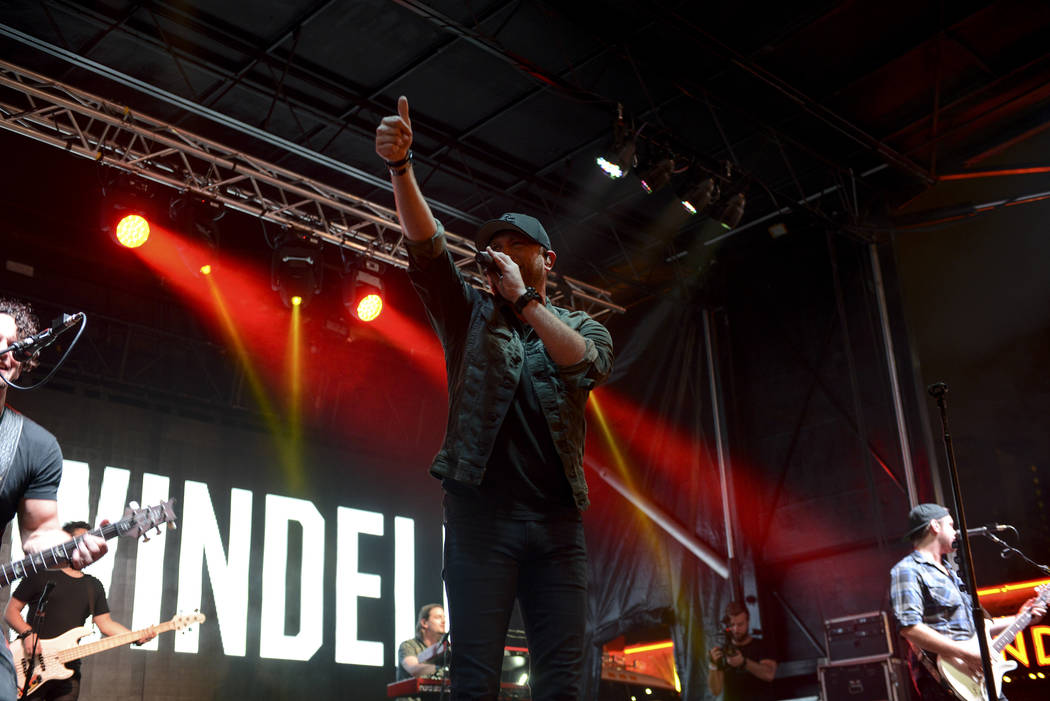 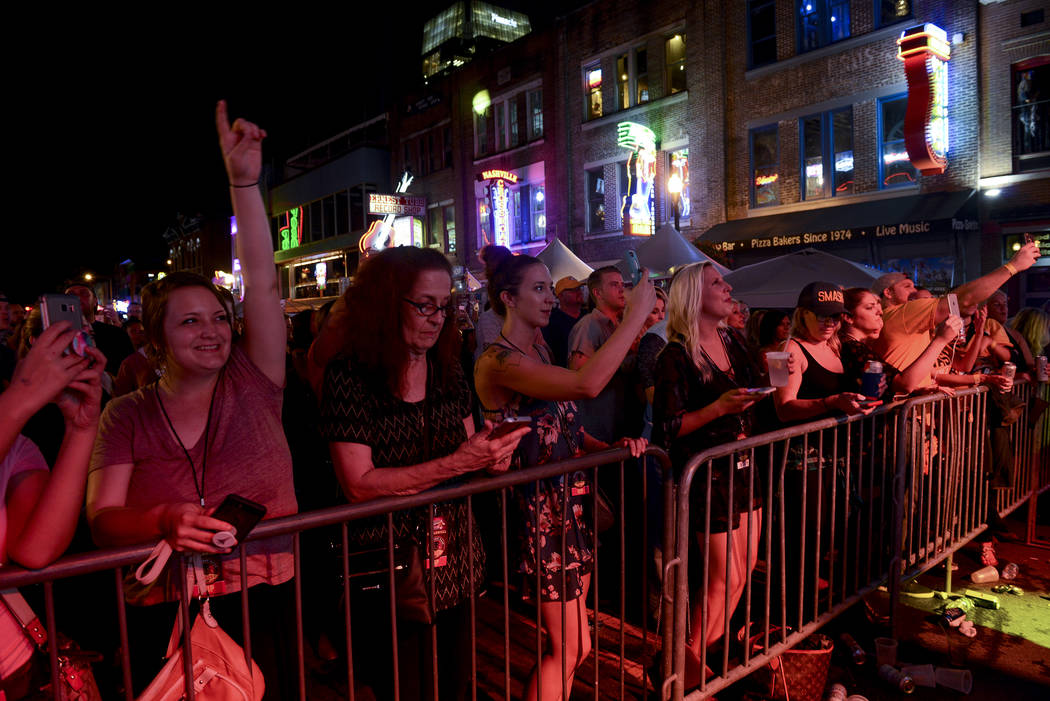 Before the chorus kicked in one last time, the mood turned from revelrous to reflective on this neon runway of beer and boots.

“Thinking about October 1 in Las Vegas, I want you to know this is what we do,” Cole Swindell announced from the stage while gazing down a blocked-off stretch of Nashville’s Lower Broadway, where a few thousand fenced-in country music fans made a Tuesday feel more like a Friday. “We write songs, we sing them, we show up, we have a good time. We’re not going to let one act of evil ruin the way we live our lives.”

Of course, Swindell was referring to the Route 91 Harvest tragedy, and as he performed one of his biggest hits toward the end of his headlining set at the 57th anniversary party for purple-hued honky-tonk Tootsie’s Orchid Lounge, he took fleeting pause to give voice to a lasting sentiment.

“Everybody that came out here tonight — I wouldn’t have blamed you if you didn’t — but the fact that you did, I think that shows what country music is all about,” he continued, his voice as full of emotion here as hands were full of Budweisers.

Swindell has an especially strong connection to Route 91, as a video of shooting victim Brennan Stewart singing Swindell’s “You Should Be Here” went viral after his death.

“I’m a country music fan just like anybody else, and that could have been any of us out there in that crowd,” Swindell added. “Thank you for coming out and showing your support for those 58 that didn’t make it home a couple nights ago.”

Shortly thereafter he delivered the final strains of “Ain’t Worth the Whiskey.”

“Here’s to a good country song,” Swindell sang, his words echoed in the throats of the audience before him.

The party must continue

Now, there’s a reason some folks colloquially refer to this city as NashVegas: This stretch of downtown is a lot like a honky-tonk version of the Strip, a glowing avenue of entertainment populated by hordes of fun seekers who instill an excitement in the air, right alongside the scent of smoked meats and fresh leather.

Music blares from every bar, where live bands play — often right up front, by the window — from one morning to the next. Within the span of a few steps, you’ll hear a cover band somehow segue from Def Leppard to Dwight Yoakam followed by a burly fellow in denim overalls belting out a Gene Watson staple in front of crowd that was college-aged when that big-voiced Texan first broke out in the mid-’70s.

Here, in this boozy ecosystem of good times, frat dudes party next to 70-year-olds, ladies in sparkly high heels carouse alongside the flip-flops set.

The kinship between these two cities goes beyond the fact that so many Nashville-based musicians regularly play Vegas and flock to awards shows and other events there: It also manifests in how each responds to tragedy.

This night was an encapsulation of as much: The band must play on, the party must continue.

“I think it’s really important,” Nashville resident Laurie Wetzel said of folks not shying away from the festivities in question despite the horrific events of late. “You get out of being sad and come hang out and have a good time.”

Nearby, a vacationing couple from Wisconsin sympathized for Las Vegans, but noted that it wasn’t stopping people they knew from coming to town on planned vacations.

“To country fans, what happened in Vegas was awful,” Evelyn Severance said, standing alongside her husband at show’s end. “You have people that had trips booked into Vegas within the next couple of weeks. They’re still going. They’re not backing out. They’re looking forward to it. They know it’s very somber out there.”

There was a touch of that somberness here as well.

Earlier in the evening, singer Billy Ray Cyrus led a moment of silence for both the victims of Route 91 and the California wildfires, paying tribute to “all the broken hearts out there.”

Likewise, when Swindell took the stage, he marveled at the bravery of the first responders as the Route 91 massacre unfolded.

“Everybody was running from danger. They were running right directly into the middle of it,” he said. “That’s unbelievable to me. I don’t know what your definition of country is, but to me, that’s a good start in my book.”

Swindell would end up playing well past the show’s midnight curfew, earning a ticket from the Nashville police in the process.

He wasn’t alone in singing on.

“Everybody just continues to play,” said 26-year-old singer Richie Trotter, who performed the night before behind a full-size El Camino that buttresses the stage at Paradise Park. “It’s what we do.”