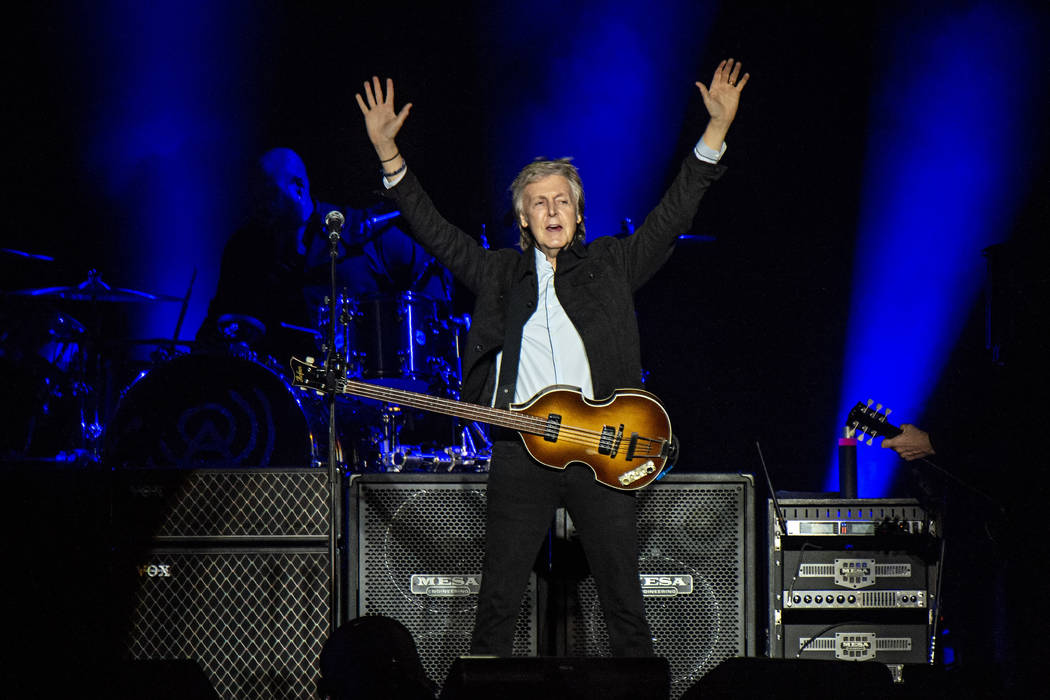 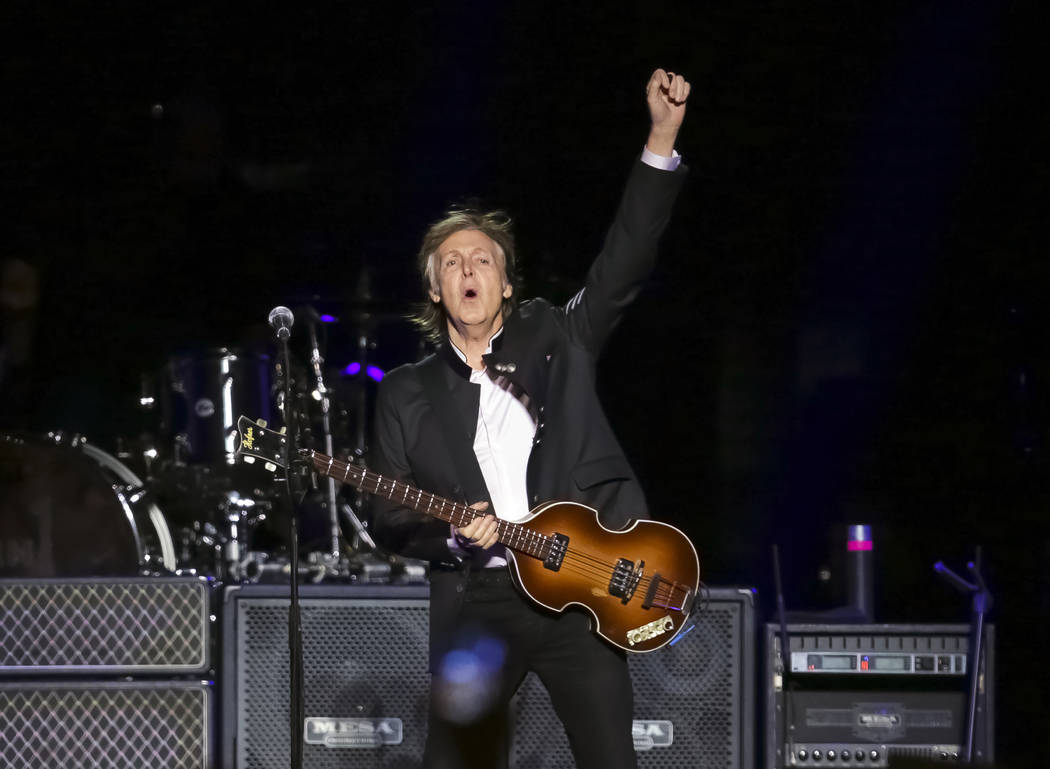 FILE - In this Monday, Sept. 11, 2017 file photo, singer/songwriter Paul McCartney performs on stage at the Prudential Center in Newark, NJ. Former Beatle McCartney has told a British newspaper he believes he once saw God during a psychedelic trip. The 76-year-old music legend told The Sunday Times he was “humbled” by the experience. The music legend is promoting a new album and a fall tour, it was reported on Sunday, Sept. 2, 2018. (Photo by Brent N. Clarke/Invision/AP, File) 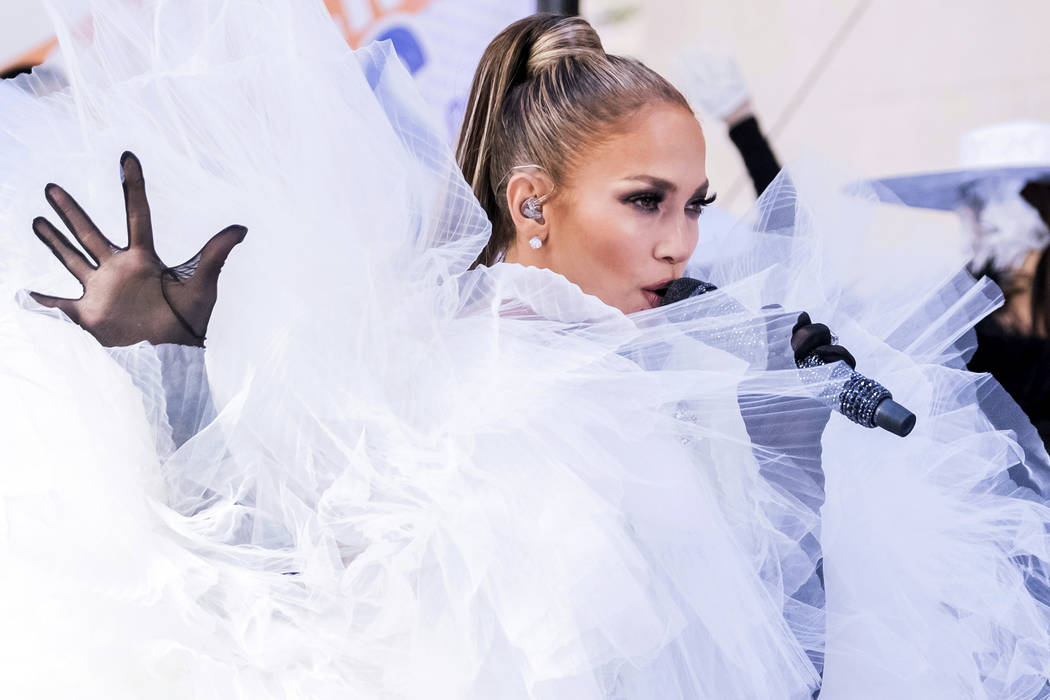 Jennifer Lopez performs on NBC's "Today" show at Rockefeller Plaza on Monday, May 6, 2019, in New York. (Photo by Charles Sykes/Invision/AP) 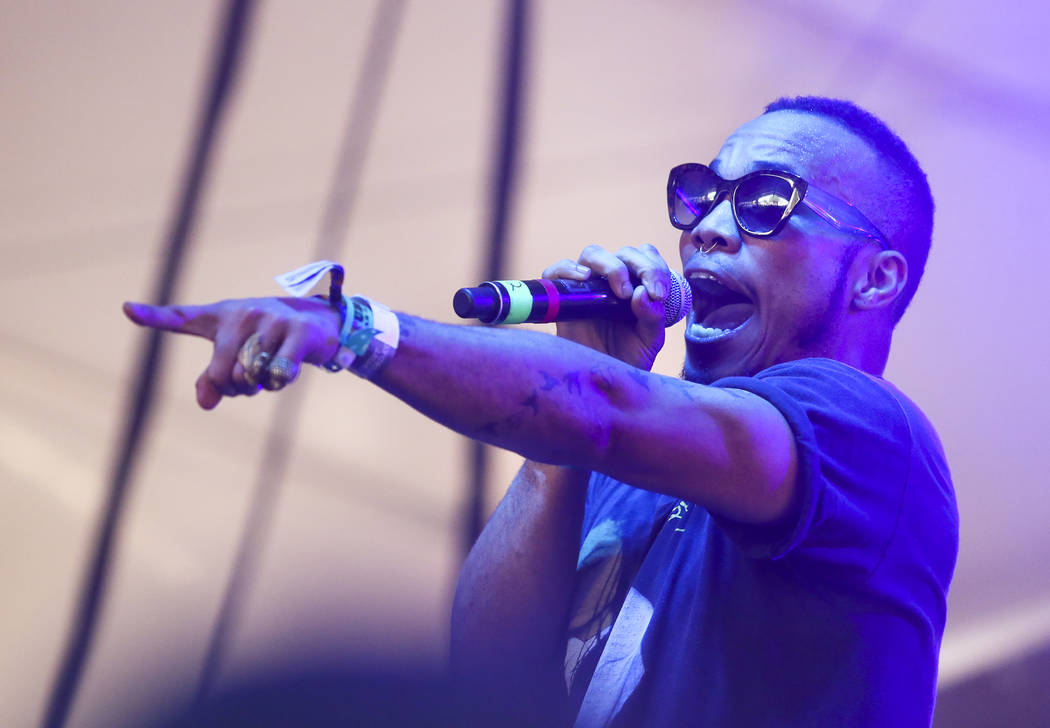 Anderson .Paak performs at the FADER FORT Presented by Converse during the South by Southwest Music Festival on Saturday, March 19, 2016, in Austin, Texas. (Photo by Jack Plunkett/Invision/AP) 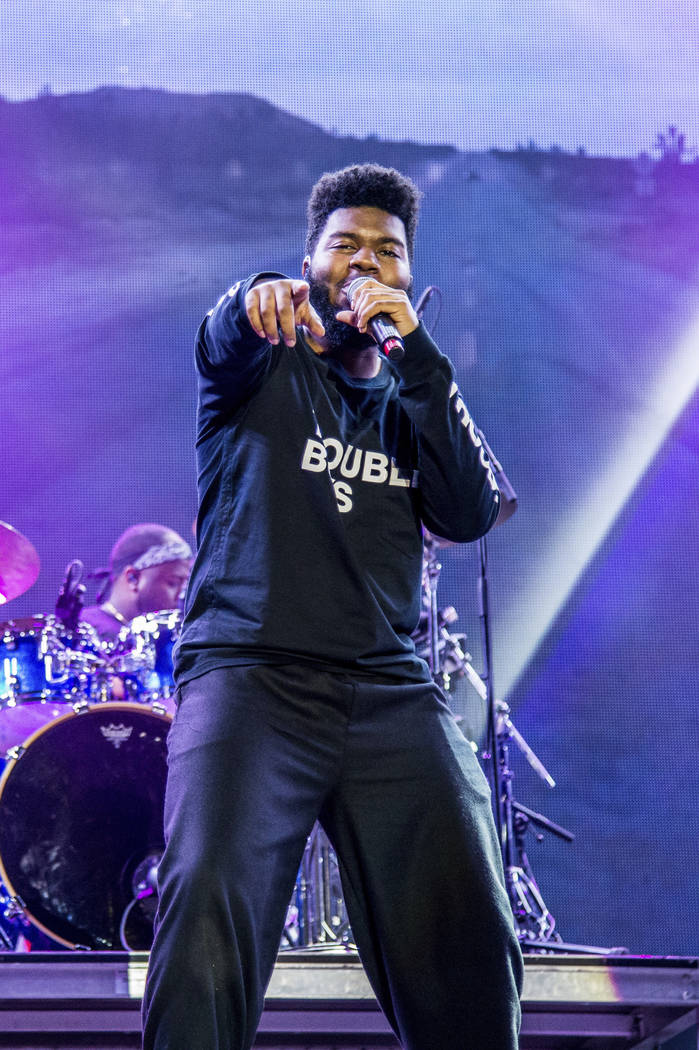 Khalid performs at the Okeechobee Music and Arts Festival on Friday, March 2, 2018, in Okeechobee, Fla. (Photo by Amy Harris/Invision/AP) 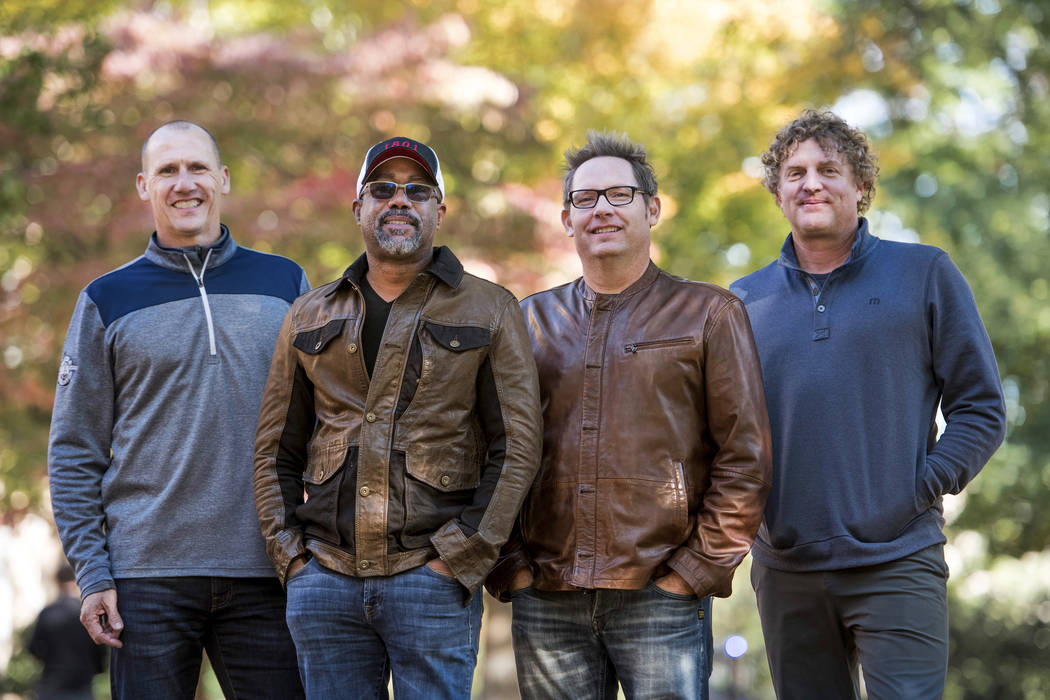 In this Nov. 16, 2018 photo, Jim Sonefeld, from left, Darius Rucker, Dean Felber, and Mark Bryan, of Hootie & the Blowfish, pose for a portrait at the University of South Carolina in Columbia, S.C. The band is returning with a tour and album 25 years after “Cracked Rear View” launched the South Carolina-based rock band. (Photo by Sean Rayford/Invision/AP) 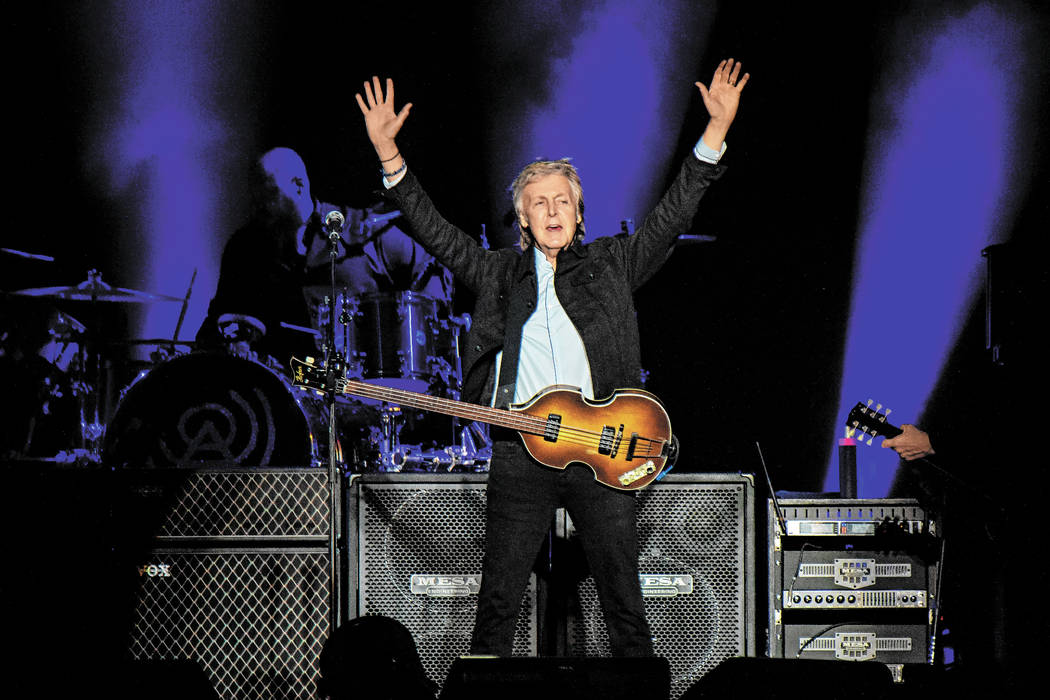 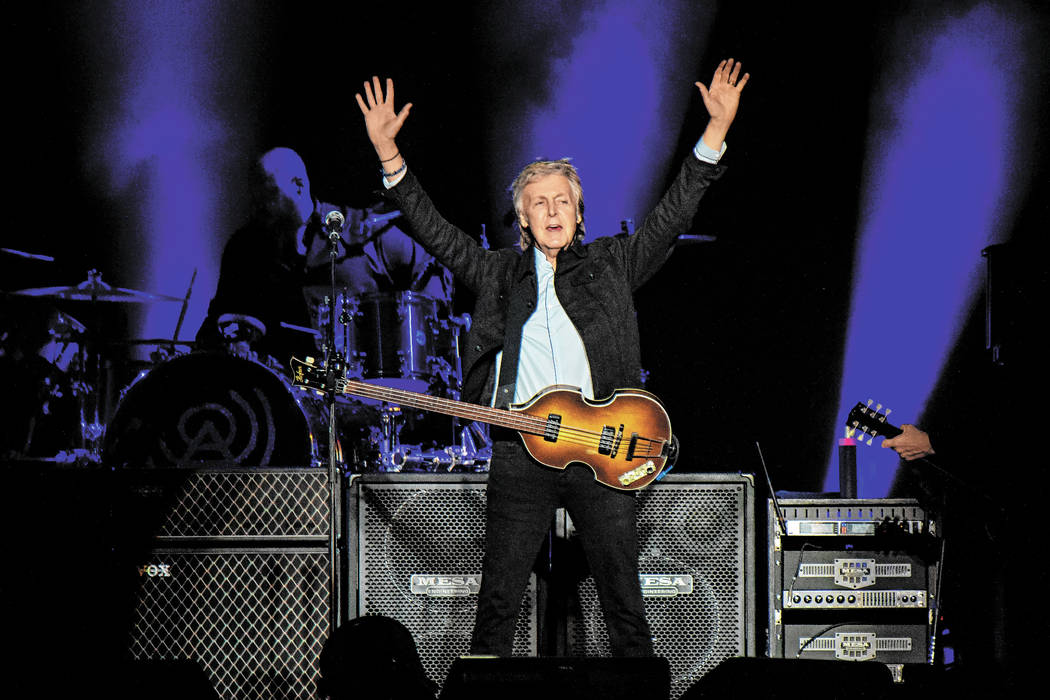 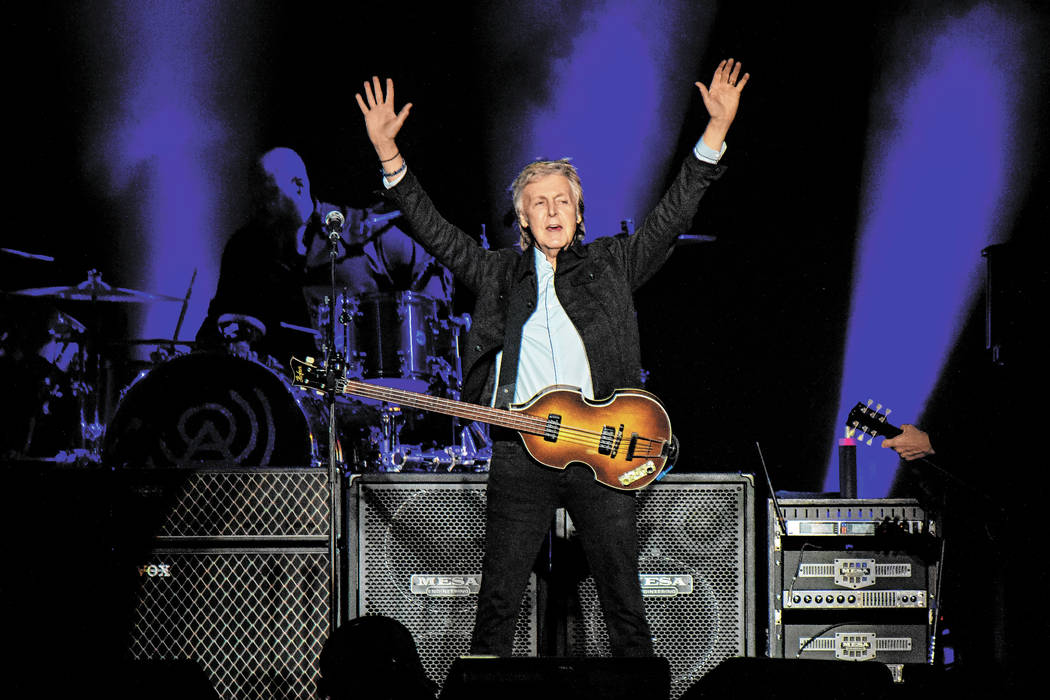 It happened in Raleigh, North Carolina: the sip of water heard ’round the world.

Paul McCartney, famous for not wetting his whistle onstage, finally took a drink during his May 27 show.

But it’s hard to blame the guy: McCartney’s set on his “Freshen Up Tour” spans 38 songs and nearly three hours, encompassing every aspect of his career, from the Beatles to Wings to his solo repertoire and even a tune from his pre-Beatles band, the Quarrymen, the 61-year-old “In Spite of All the Danger,” which McCartney hasn’t aired here since 2005.

That’ll change soon enough, as McCartney’s marathon engagement at T-Mobile Arena on June 28 and 29 is easily the biggest concert event of the month.

The rest of the top 10 shows for June:

Finally, Grandma gets to see to her favorite alien-obsessed Italian gutturalists when you take her to see Xenomorphic Contamination as part of this year’s Las Vegas Death Fest. Go ahead, close your eyes, and just imagine the look of pure joy on her face when she sings along to chestnuts such as “Colonized From the Inside” and “Metamorphic Oblivion” as LVDF returns for its 11th entrails-encrusted edition, this time featuring more than 40 acts in addition to headliners Bloodsoaked, Blood Red Throne and the kid-tested, mother-approved Holocausto Canibal.

Reggae in the Desert

You want good vibes? Reggae in the Desert has enough good vibes to choke an Orc. Seriously, you’ll probably have to resort to plastic surgery to remove the smile from your face after attending this annual, all-day event, whose lineup this year is highlighted by Mykal Rose, Sly & Robbie, Don Carlos and more.

She used to have a little, now she’s got a lot … of candles on her birthday cake. Yeah, J. Lo’s turning 50, but considering the enviable shape she’s in, we doubt she’ll be gorging on too much of the aforementioned confection. So she’ll be celebrating by hitting the road instead for what will be one of her most elaborate productions yet. Don’t forget to show up with a present, cheapskate.

June 15, The Joint at the Hard Rock Hotel

Candy girls, rejoice: Forty-one years after Bobby Brown, Michael Bivins and Ricky Bell first got together in their hometown of Boston to launch what would later become R&B heartthrobs New Edition, those three and later group member Ronnie DeVoe are back on the road together. They’ll perform hits culled from the New Edition, Bobby Brown and Bell Biv DeVoe catalogs, from “My Prerogative” to “Poison” to “Mr. Telephone Man” for, you know, those who remember what a telephone was.

June 16, The Pearl at the Palms

His smile is as big and warm as his voice, and Anderson .Paak knows it, hence the title of his latest outing: the “Best Teef in the Game Tour.” The R&B live wire is hitting the road in support of new record “Ventura,” whose diversity is underscored by its guest musicians, with appearances by soul great Smokey Robinson, Outkast’s turbo-tongued Andre 3000, a posthumous contribution from Nate Dogg and more.

Speaking of precociously talented R&B singers, this 21-year-old phenom has already earned five Grammy nominations and in April became the first artist to occupy the entire top five of the Billboard R&B Songs chart. Now he’s headlining his debut arena tour in support of sophomore record “Free Spirit,” his first of what is likely to be many No. 1 albums.

Hootie and the Blowfish

They’re gonna love you the best that they can, and clearly the affection is mutual, as these ’90s alt-rock-radio mainstays are doing blockbuster business on their first tour after a decadelong hiatus from the road. The outing coincides with the 25th anniversary of their smash debut, “Cracked Rear View,” which remains one of the top-selling albums of all time, certified platinum 21 times over.

“Knuckle Up” when these rap-punk antagonists bring in the noise in a very literal sense with a bracing songbook equally indebted to Jason Voorhees, Atari Teenage Riot, The Gravediggaz and 1,000 hardcore bands playing at once.

June 29, Brooklyn Bowl at The Linq

Because who wouldn’t want to see a three-dimensional approximation of a late metal great belting out anthems about dreaming evil and rainbows in the dark? Sure, there are reportedly plans for a Whitney Houston hologram tour as well, but she has way fewer songs about slaying dragons, so the choice here seems fairly obvious. 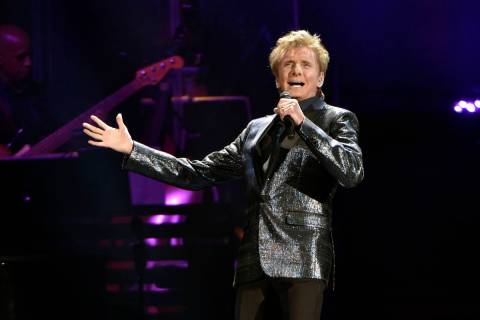 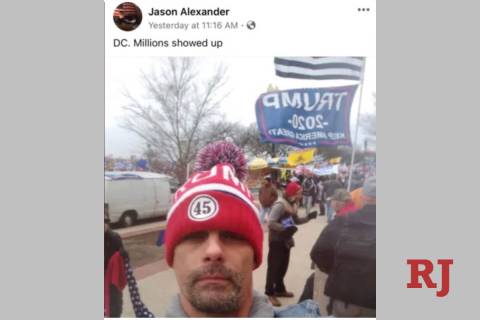