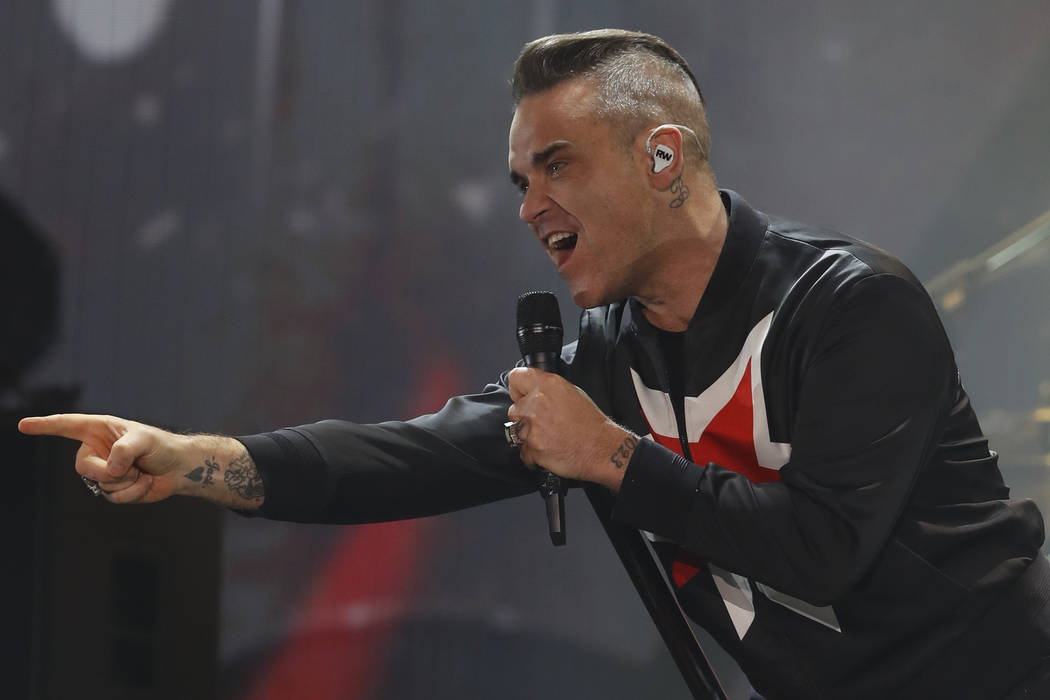 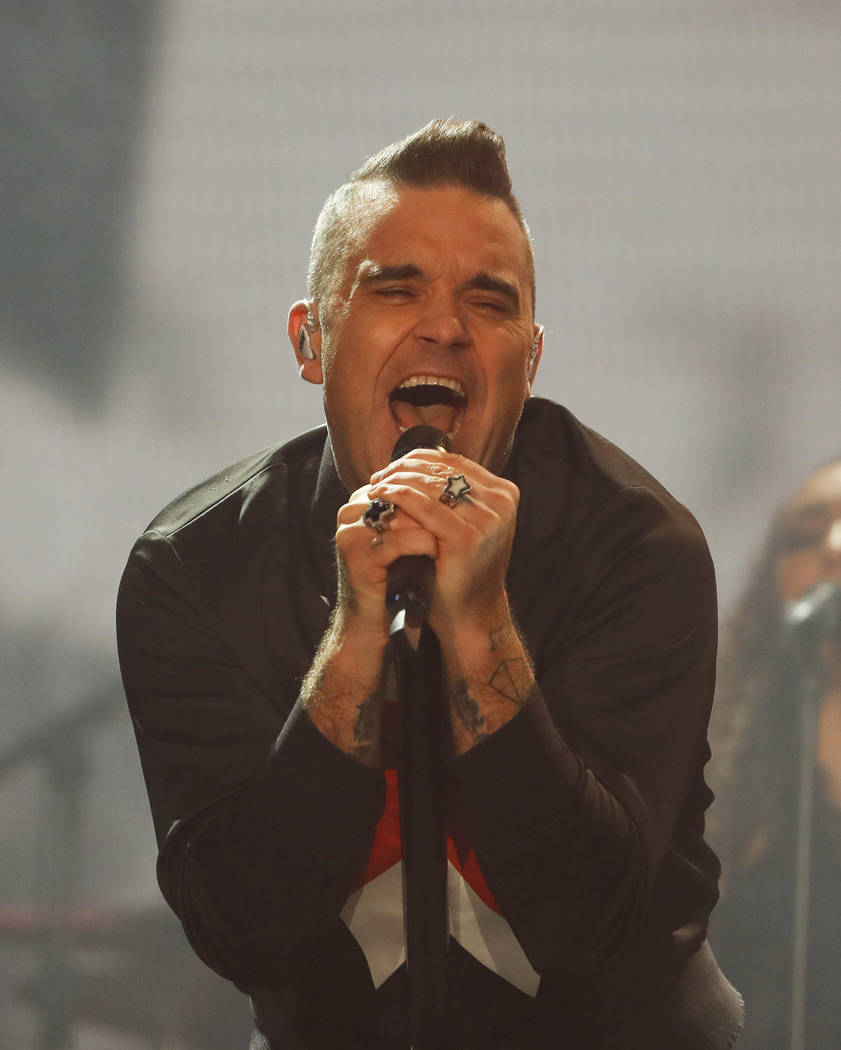 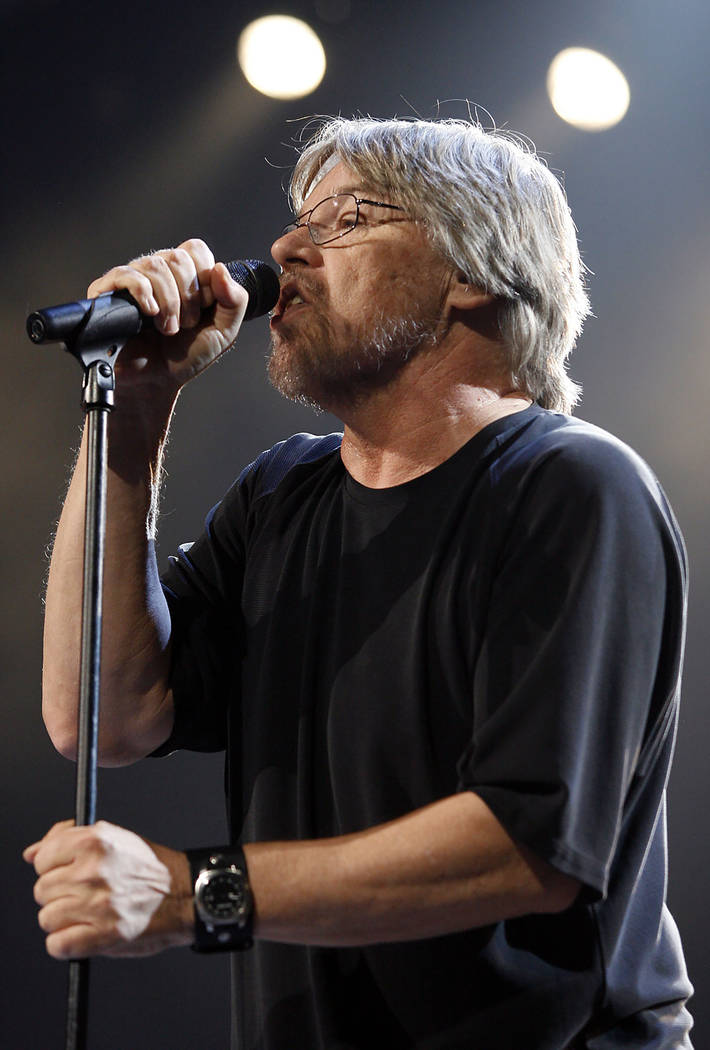 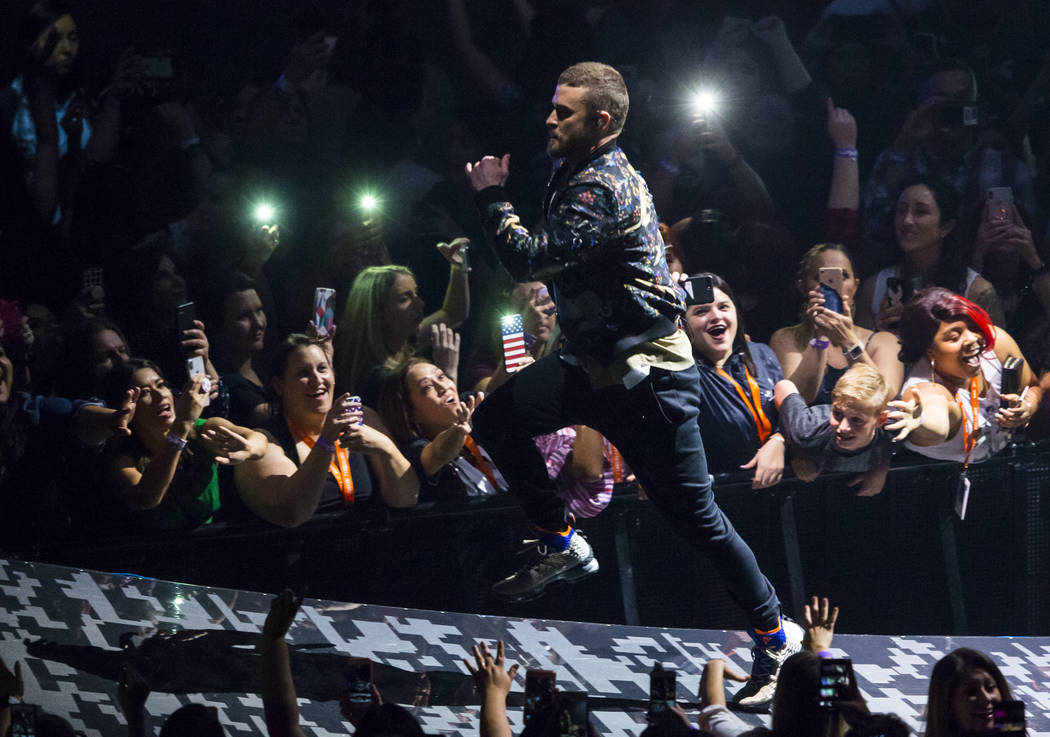 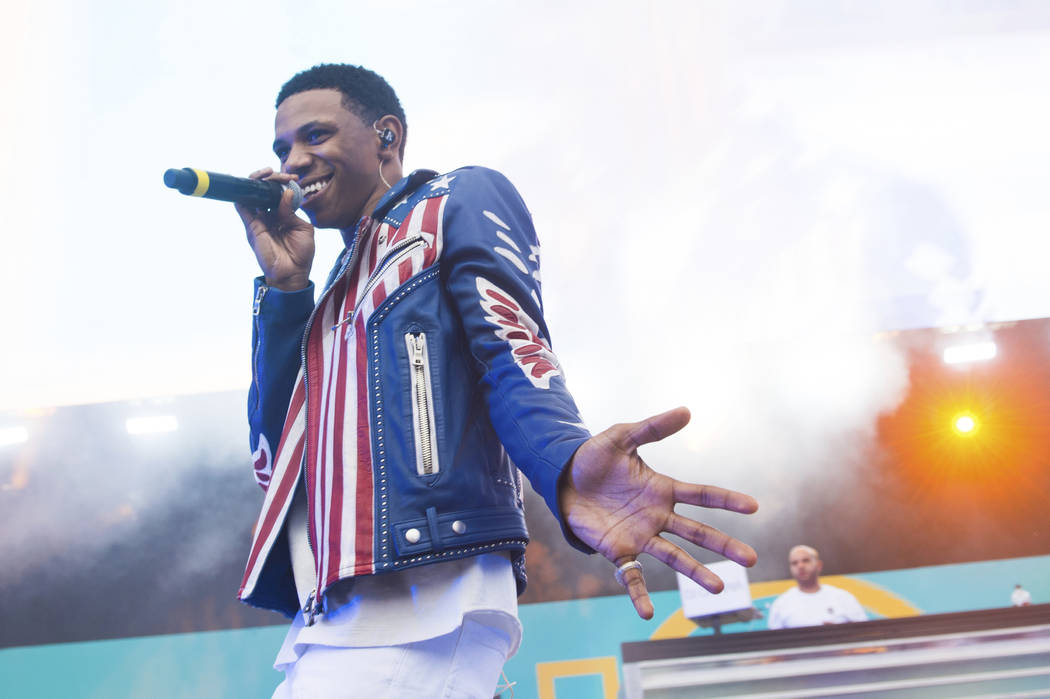 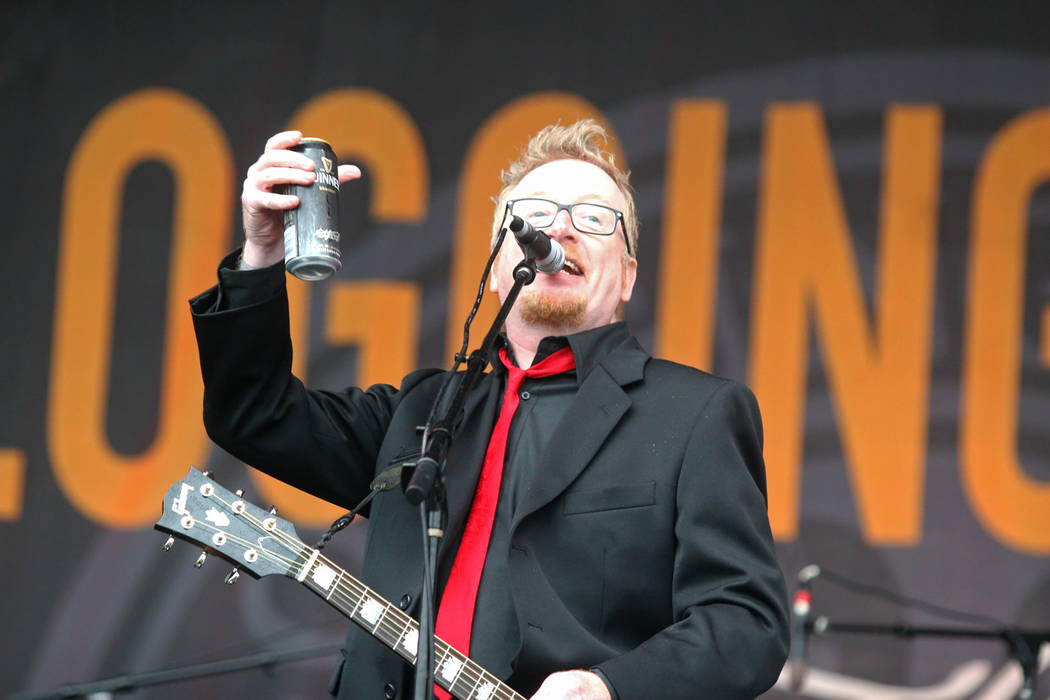 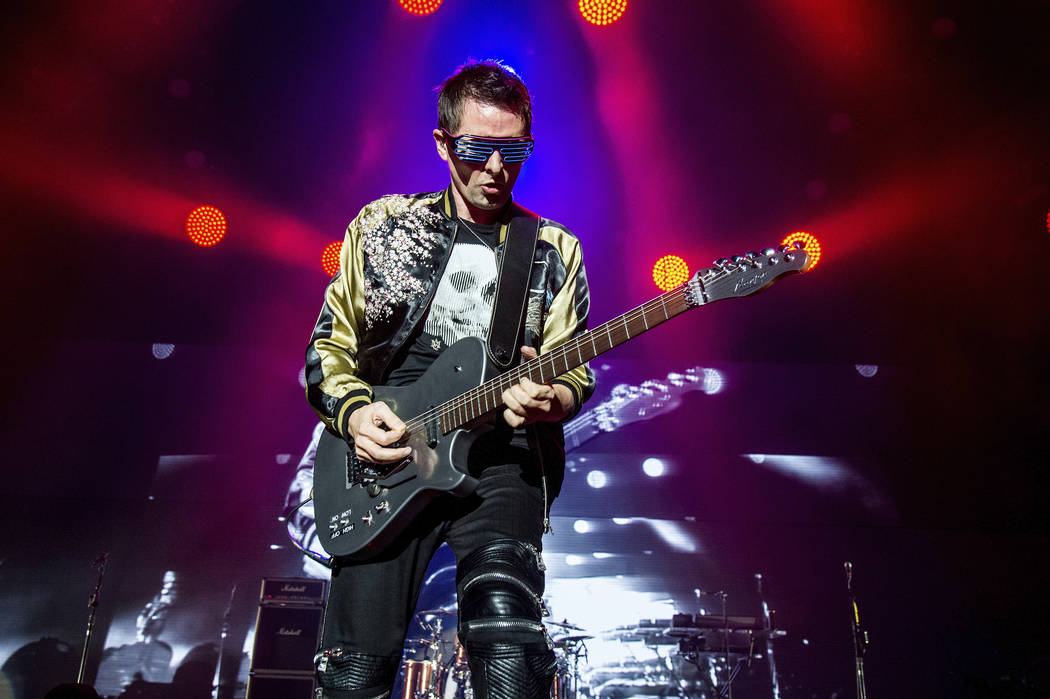 Matt Bellamy of Muse performs at the 2017 KROQ Almost Acoustic Christmas at The Forum on Saturday, Dec. 9, 2017, in Inglewood, Calif. (Photo by Amy Harris/Invision/AP) 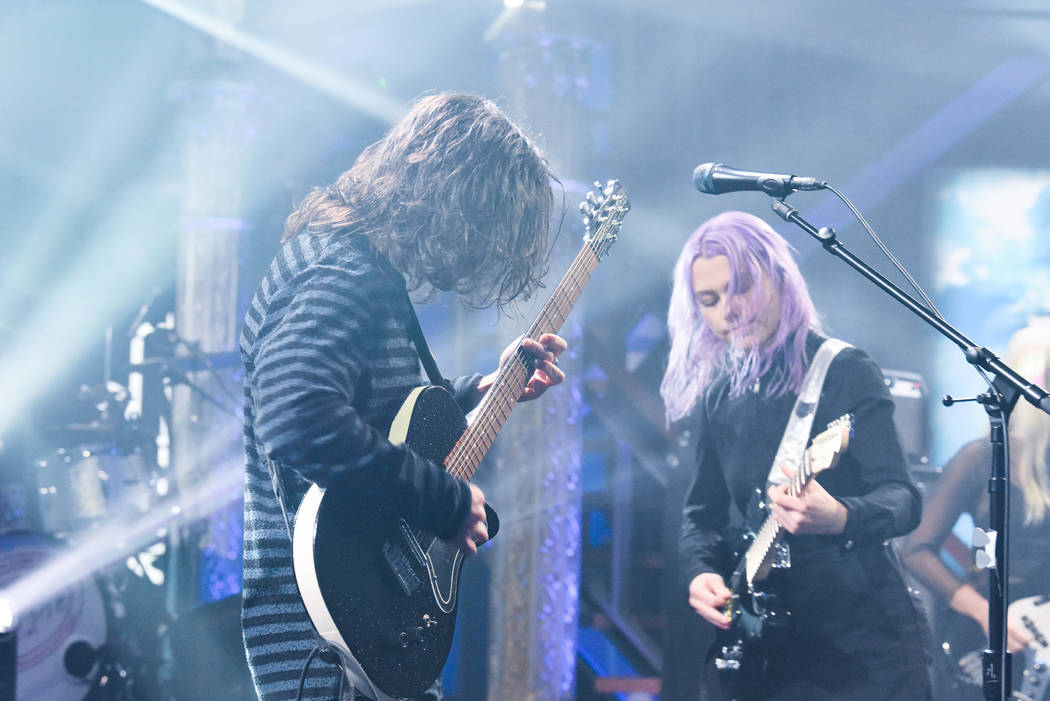 Maybe only cold cocking fans of the opposing “football” squad is bigger over there.

It’s hard to overstate just how massive Robbie Williams is in his native England.

He’s the top -selling British solo artist of all time, with 10 No. 1 albums and seven chart-topping singles.

And his success is far from confined to his homeland: Williams is also the top-selling non-Latino artist in Latin America, has sold more than 75 million albums worldwide and, in 2006, made it into the Guinness World Records for selling 1.6 million tickets in a day.

In other words, like Ron Burgundy with a neck tattoo, he’s kind of a big deal.

So it’s an even bigger deal that Williams is launching his first residency in Las Vegas at the Encore Theater at Wynn Las Vegas. Williams has 15 shows scheduled there, from March 6 through July 6.

Williams’ showcase highlights the top 10 concerts of March. Here are the rest:

The arena-rock equivalent of a blockbuster summer sci-fi flick, Muse’s live gigs are high-tech spectacles where the future is now. Fittingly enough, the band’s latest record, “Simulation Theory,” is a concept album of sorts about fantasy becoming reality, which has been these dudes’ stock in trade for over two decades.

That old time rock ’n’ roll never gets old, though the same can’t be said of the dudes who make it, unfortunately. And so Bob Seger is turning the page on the touring life: The original ramblin’ gamblin’ man will retire from the road after his current outing.

Cradle of Filth, House of Blues at Mandalay Bay, March 7

“Exquisite Torments Await” when these symphonic, theatrical, tonsil-torturing British black metallers hit town for the first time in support of their latest album “Cryptoriana — The Seductiveness of Decay.” Think of it as a night at the opera — with Satan.

He already brought sexy back, now Justin Timberlake is doing the same with his “Man of the Woods Tour,” which packed T-Mobile Arena over two nights in April. Expect an abundance of onstage foliage, sighing ladies and Timberlake’s signature liquid-hipped dance moves.

Flogging Molly, The Chelsea at The Cosmopolitan of Las Vegas, March 15

The downing of green beer needs its theme music — you know, other, than the requisite sound of digestional protest. And so once again, these forever festive Celt punks are here to get the job done — along with the obligatory antacids.

Brett Young, The Joint at the Hard Rock Hotel, March 22

This former major league pitching prospect had his athletic career ended by an elbow injury, but baseball’s loss was pop-country’s gain. Young has built himself into a rising star thanks to smash single “In Case You Didn’t Know.” You know now.

“I’m a rap star,” this 23-year-old Auto-Tune enthusiast declares early on his brooding, darkly melodic second record, “Hoodie SZN.” It became Boogie’s first No. 1 album when it hit shelves in December, enabling him to live up to said boast.

These indie rockers continue to share their deeply-felt feelings on their elegantly wrought latest album, “Thank You for Today,” where emotions and electronic flourishes percolate in unison.