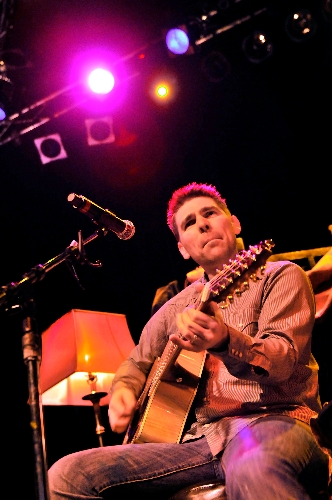 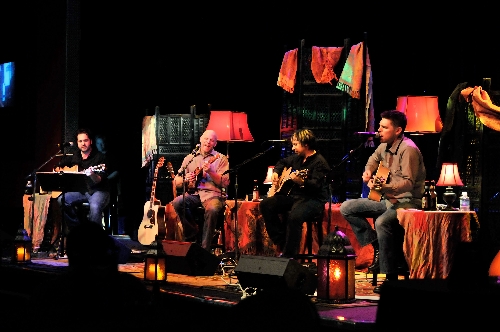 Whether it’s a mandolin or an acoustic guitar, string instruments are in the spotlight for the band Strung Out Sessions.

“(The band) is built around guitars and great vocals for a combined uniqueness,” said Patrick Genovese, lead singer and guitarist for the band. “How many six-member bands do you see with four lead guitarists? We focus on having rich, four-part harmonies.”

Strung Out Sessions plays at 10 p.m. Saturdays at Club Madrid inside Sunset Station, 1301 W. Sunset Road. Admission is free and open to adults 21 or older.

Almost two years ago, Genovese was approached by Station Casinos about putting together a show, adding a few new musicians to play alongside him.

“It was just four guys sitting around with our guitars,” said Rick Duarte, another singer and guitarist with the band.

Strung Out Sessions started playing at Texas Station before transferring to Sunset Station.

When it started, the band had more of an acoustic, unplugged feel.

“Then we started going through a metamorphosis,” Genovese said.

Duarte said the band went from four members to six, adding a bass player and a drummer.

Audiences can still find the band’s acoustic feel during sets mixed with times where the band “rocks out,” Genovese said.

Duarte said, however, it is more than just rocking out.

“Every arrangement is thought out,” Duarte said.

The main focus isn’t necessarily the style but the quality of the sound they produce.

“We want to have something for everyone,” Genovese said. “Our mantra is let’s not just be classic rock; let’s not be pigeonholed.”

Instead, Genovese considers the show as a dance, a musical experience for all crowds.

“If there is a NASCAR event in town, we know not to play Alice in Chains,” Genovese said. “We adjust to the crowd we are playing for. We might switch it up to more Johnny Cash.”

Because of its ability to adjust to the crowd, the band has seen different reactions from people.

Duarte said they have gotten great audience response when they play songs such as “Come Sail Away” or mash-ups of Pink Floyd songs.

“I like playing the songs that get reactions,” Duarte said. “I don’t just play for me. I’m up there for the audience.”

When coming up with a name for the band, Genovese looked for something dynamic to represent what people would find when watching a performance.

Genovese said the band members liked the idea of using the words “strung out” in the name, playing on the fact that there are multiple string instruments on stage.

“There was already an East Coast band with that name, so we didn’t want to steal their thunder,” Genovese said.

Genovese said he also wanted to incorporate the word “sessions” in the name.

“So we married the two to come up with Strung Out Sessions,” Genovese said. “It’s more of a show name opposed to a band name. I like the idea that you are checking out a show, not just a band or club.”

In August, the band is expected to switch musicians – two of its current players are touring members of The Killers and are leaving to go on a world tour.

“We are bummed out, but the two new members coming in are phenomenal,” Genovese said.

Duarte said with the new members, Strung Out Sessions gets to offer a new feel.

“We get to offer our 3.0 version with some new surprises,” Duarte said.

Genovese added that the band hopes to add new songs and go deeper in genres.

“We are looking to add some newer country stuff and indie rock,” Genovese said. “We hit on Foster the People and got a great response.”

For more information on the band, visit facebook.com/strungoutsessions.