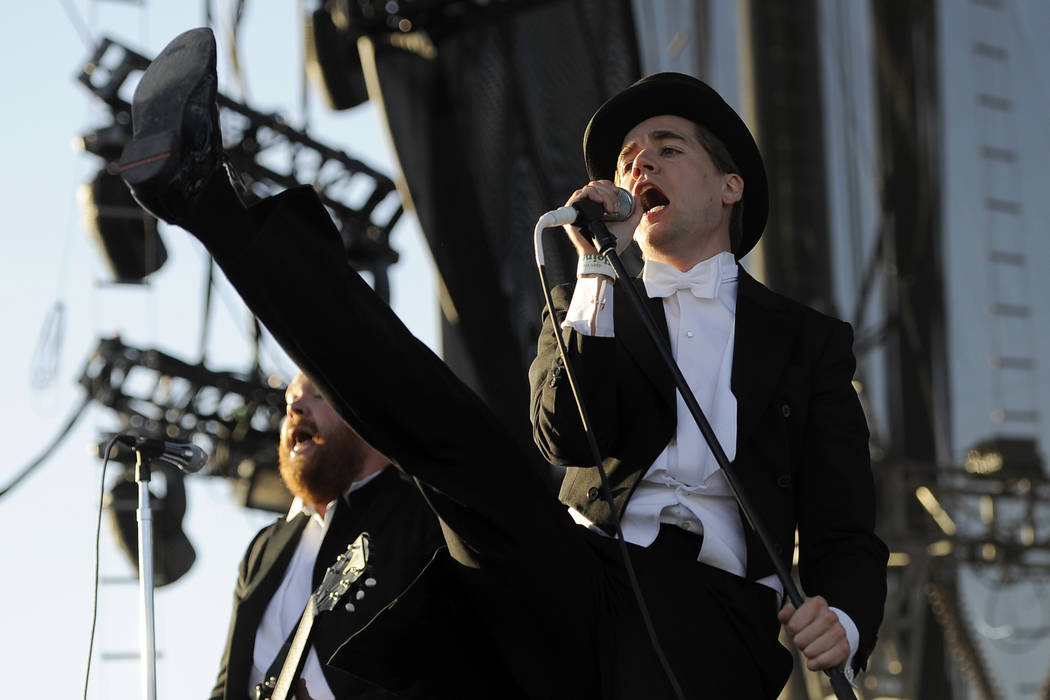 Pelle Almqvist of The Hives performs during the band's set on the first weekend of the 2012 Coachella Valley Music and Arts Festival, Sunday, April 15, 2012, in Indio, Calif. (AP Photo/Chris Pizzello)

Howlin’ Pelle Almqvist was admiring his own work.

The Hives frontman was in the midst of delivering a “magical combination of punk rock and show business,” in his words, he and his bandmates dressed to the nines in bow ties and white tuxedos.

Their dress shirts would soon become see-through thanks to all the sweat they exuded during their command performance at Punk Rock Bowling on Monday at the Downtown Las Vegas Events Center, where the 21st edition of the three-day fest came to a climactic close.

All leg kicks and overworked adrenal glands, The Hives turned in one of the weekend’s best performances.

A few other highlights:

No refusing the Refused

“When I discovered punk rock, it was super political,” nattily attired Refused frontman Dennis Lyxzen panted into the mic during the rare pause in his band’s bracing Sunday set. “If some idiot gives me a microphone. I’m going to say (things) that matter. I would like to see the movement radicalized.” To this end, the Swedes did their part with caustic, combustible post-hardcore that felt like it was detonated as much as performed.

The try-hard award of the weekend

Goes to the dude dressed as a pink elephant doing his best to mosh to The Stranglers’ superbly all-over-the-place art punk. Hard to get the pit going to stoner-iffic keyboard solos, dude.

“Let’s change the ratio of male-to-female up here,” The Coathangers’ singer-guitarist-squeaker Julia Kugel-Montoya urged during her band’s second stage set Sunday, advocating for more female performers at PRB, of which there were a fair amount this year, though mostly on the side stage. The Coathangers did their part with hard-edged garage rock culminating with Kugel-Montoya incorporating a squeeze toy into the band’s final tune.

Some more Flag. “I’m about to explode!,” singer Keith Morris howled Saturday, eyes big as the chip on his shoulder as the hardcore punk greats knocked PRB on its heels for the third time.

All he wanted was a Pepsi …

But Suicidal Tendencies major domo Mike Muir got plenty of PRB love instead. Though his band didn’t play the fest this year after turning in one of the fiercest sets of 2018, there Muir was manning the group’s merch booth every day, taking countless pictures and talking to anyone who stopped by. It was cool to see any barriers between artist and audience crumbled for a weekend.

By the dad who hoisted his young daughter on his shoulders and hit the pit for The Damned. She looked like she was having the time of her life as Pops stomped forth in circles.

As his band took the stage Sunday night, Descendents singer Milo Aukerman urged the crowd to hit the coffee truck nearby. It wasn’t necessary, really: The Descendents’ heart-palpitating pop punk made caffeine an afterthought.

No case of the Mondays

There’s usually a visible drop-off in attendance come Monday’s show, just because plenty of out-of-towners have to work the next day. But this year, ska favorites The Specials drew one of the largest closing-night crowds in PRB memory. Because: trombone solos.

The singalong of the weekend

Was arguably Rancid’s “Radio” on Saturday, when it felt like one big, sweaty, raw-lunged karaoke session during the band’s ecstatically received headlining set.

That place was right here.