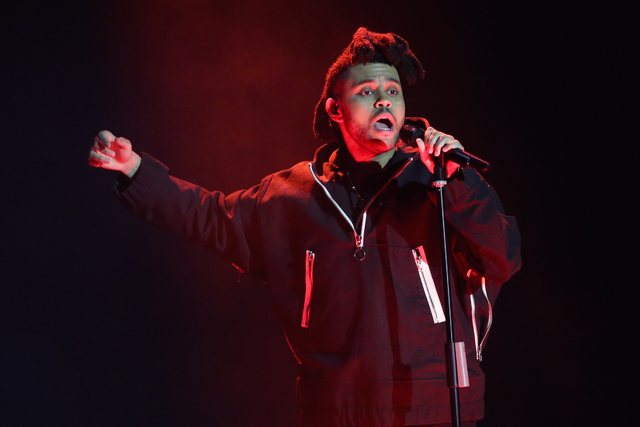 FILE - In this April 7, 2016, file photo, The Weeknd performs during the 2016 Echo Music Award ceremony in Berlin. Kanye West and The Weeknd will headline the first edition of the Meadows Music and Arts Festival in October 2016 in New York City. (AP Photo/Markus Schreiber, Pool, File)

The Weeknd is coming on The Weekend.

Here in Vegas, we’ve become spoiled with big-name concerts as part of the city’s abundant New Year’s Eve festivities in the days before the calendar flips.

R&B subvert The Weeknd is the latest addition to this year’s NYE lineup, playing The Chelsea at The Cosmopolitan of Las Vegas on Dec. 30.

He’s not alone: Rock and Roll Hall of Famer Sting has also just announced that he’ll be performing at The Chelsea, holding court Dec. 31.

Tickets for both shows go on sale at 10 a.m. Friday.

These two bookings bring into focus what’s shaping up to be another loaded NYE weekend.

Some other notable shows:

— ’80s-lusting R&B throwback Bruno Mars takes over the new Park Theater at the Monte Carlo on Dec. 30 and 31.

— Pop rockers Maroon 5 will play a two-night engagement of their own at the Mandalay Bay Events Center on Dec. 30 and 31, which they’ve done for several years now.

— Country pretty boy Luke Bryan will smile ‘til his face hurts at the MGM Grand Garden arena on Dec. 30.

— You want the funk? George Clinton and Parliament Funkadelic will bring it at Brooklyn Bowl at The Linq on Dec. 31.

— Hip-hop kingpin Drake rings up a little “Hotline Bling” at Hakkasan at the MGM Grand on Dec. 31.